Posts: 2482
Location: FL
110
posted 7 years ago
I've lost most of my pictures to computer failure over the years. I've still got some to share.

This is a headboard to a bed for a nephew. The kid just finished Navy bootcamp this week.
3/4 red oak
vertical slats are 1/4" stock
All joints are mortise and tenon.
No idea what the stain was, probably Minwax.
Polyurethane finish. Been so long I can't say if its gloss or satin.

While renovating a duplex I tore out some sort of decorative room divider, kept the lumber.
This is douglas fir, real easy to work with.
The top is all mortise and tenon. The cross piece went in first, 2 long boards to make an X. I cut dados where they overlap.
It was assembled by adding 2 pieces at a time, adding a clamp. I'd come back after a couple of days, fit in a couple more pieces.
It's a simple table, but took me forever to put it together.
Legs are tapered. Edge was detailed with an ogee router bit.

I had a section of carpet sitting around. Pulled it out, unrolled it, threw it up over a couple of doors to give me the background. 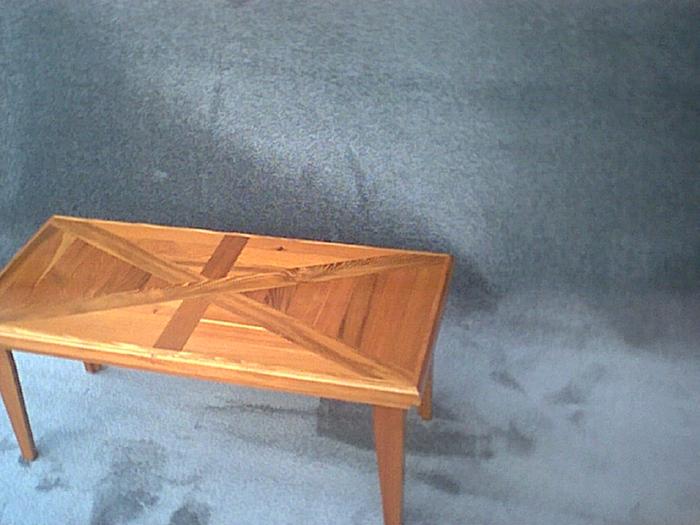 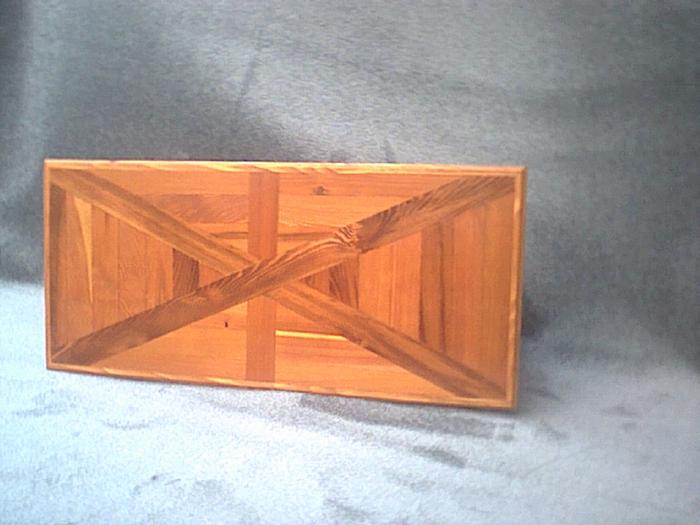 Posts: 2482
Location: FL
110
posted 7 years ago
A simple trestle table made with white pine
I think it was about 30 wide 48 long. As I recall this was standard height until I added the feet.
I had run out of white pine and had to replace a fridge in an apartment. The new fridge had some boards screwed on the bottom for shipping. I used that lumber for the feet.
Top an legs are glued up with biscuits.
The feet were drilled, counter sunk, screwed, then filled the holes with plugs.
Top is done with an epoxy, looks like glass. Took a couple of days to cure. 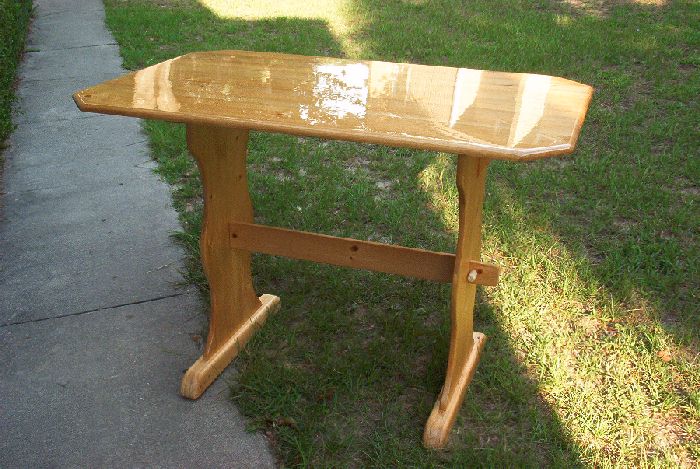 Posts: 2482
Location: FL
110
posted 7 years ago
My brother's kitchen, before, during and after.
Cabinets are really simple. It's a box with doors and drawers.
People pay good money for cabinets!

The boxes here are baltic plywood. The upper section is full depth of 2'. What's the point of cabinets over a fridge that you have to clear off the top to get to. Make em big.
Door panels are 1/4" oak plywood. Same roundover bit used to make that kids bed.
There was much discussion of cutting the wall, moving the outlet. My brother made the point that the outlet was never used.
In went the cabinets.

Posts: 2482
Location: FL
110
posted 7 years ago
Bathroom vanity at my brother's house.
Same as the kitchen cabinets and kids bed.
Oak plywood for the side.
This piece has a slick feature. Because the plumbing went into the wall, the inside bottom was raised and a drawer added. The drawer goes all the way to the floor, deep enough to hold TP so that when you need it most, you don't have to yell.
Hardware is polished stainless steel so it doesn't rust in the humidity.
The side drawer were given an extra thick wipe of stain across the middle. It looks great but the picture makes it stand out more than the eye would catch. 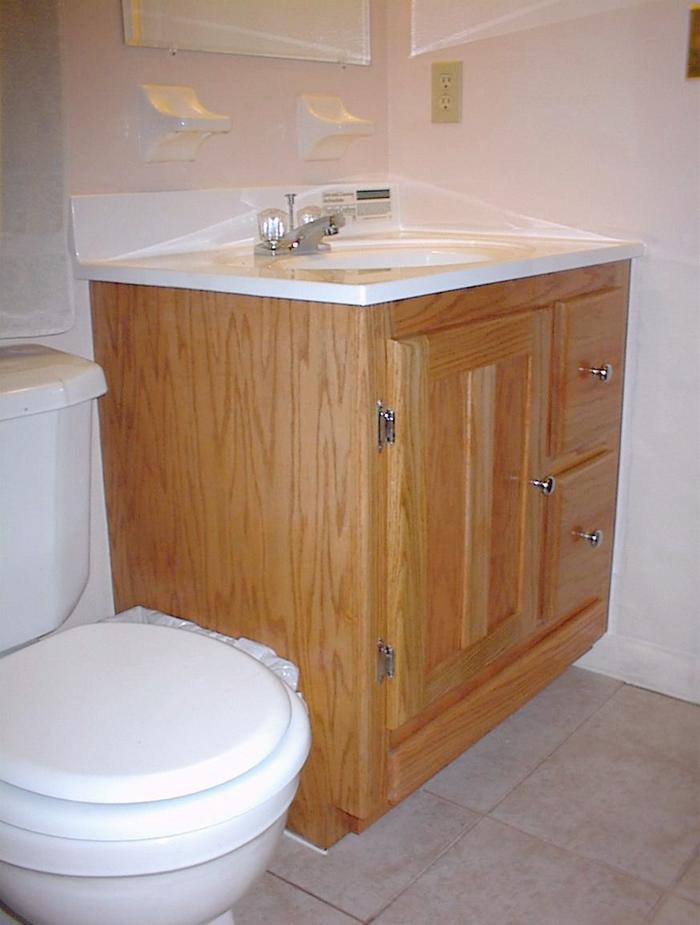 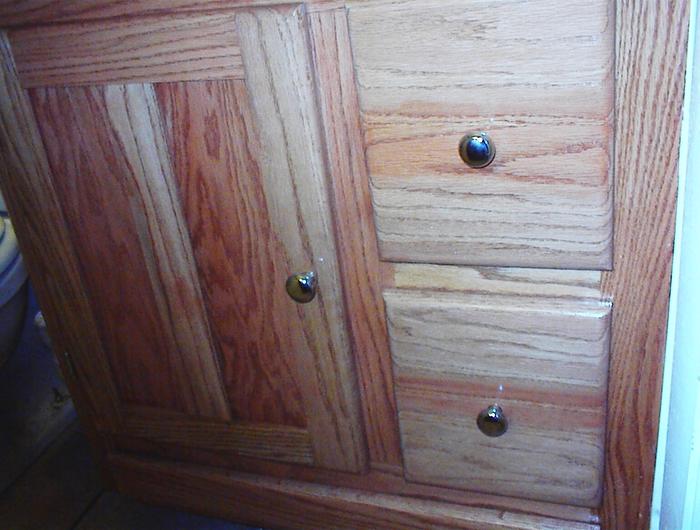 Posts: 2482
Location: FL
110
posted 7 years ago
Bedroom furniture. Sounds great, looks great, but what a lot of work!
A dresser is just a box to hold boxes.

This is knotty pine from top to bottom. A white pickling stain was selected, not by me, I don't care for the look, but someone else paid for this stuff.
This fellow paid $600 each for a dresser and chest of drawers, plus 100 for the mirror.
He had a couple of end tables which I used as the design model.

1st pic shows the dresser before the back went on. Note the additional drawer support to hold plenty of weight. I also needed to close the gap between the side panels and the drawer glides.
2nd pic shows the top which was done with a gloss polyurethane. The idea was to make it easier to dust and give it a handsome eye appeal. The build on the topcoat was a couple extra layers applied. The rest of the dresser was done with a satin finish.
3rd pic is the drawers. Jard to see the detail but these are all dovetailed, single piece of pine for the sides. Bottoms are 1/4" birch panels.
4: assembled, ready to go
5: with the drawers open. A chance to try to make out the difference between the side and top 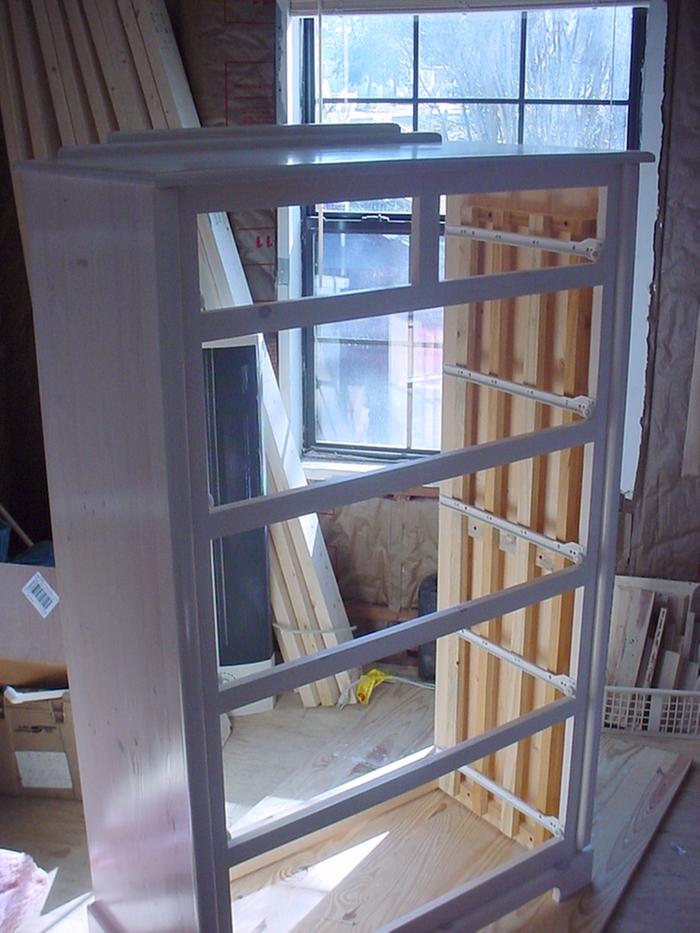 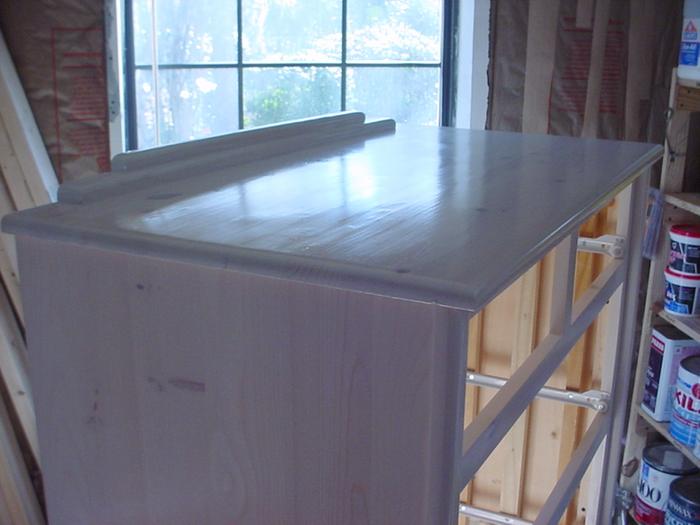 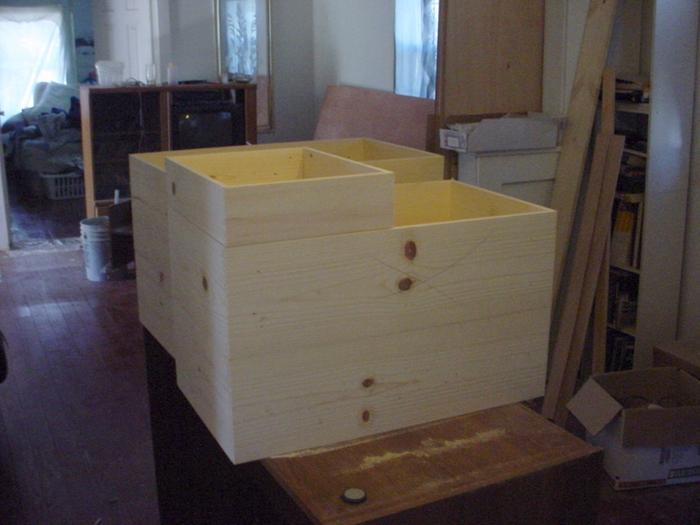 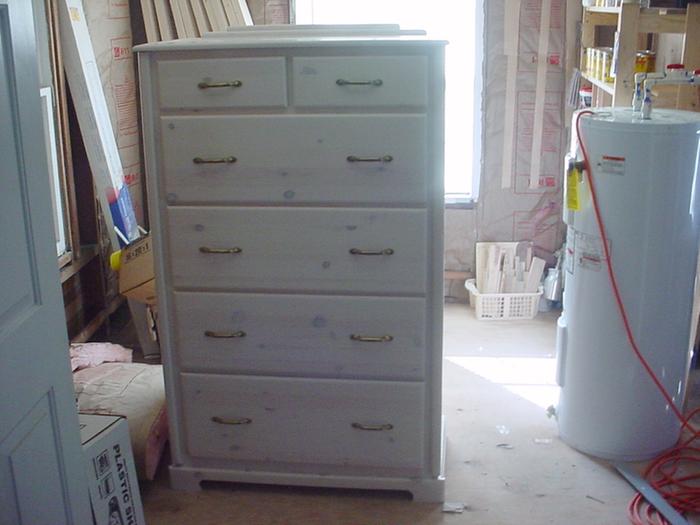 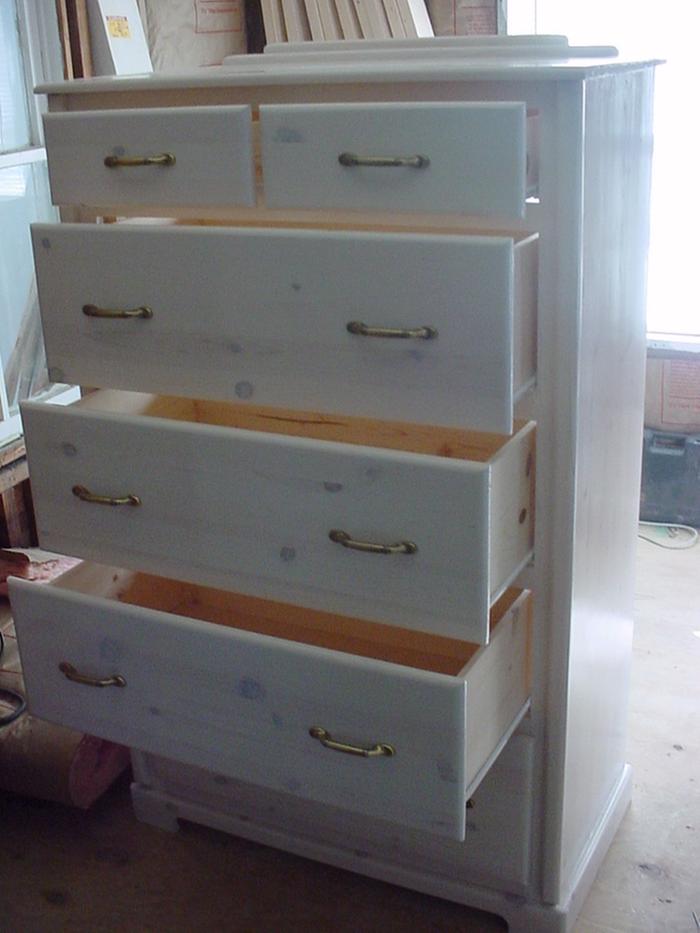 Posts: 2482
Location: FL
110
posted 7 years ago
The mate.
Pay no attention to the reflection in the last shot!
dressser.JPG 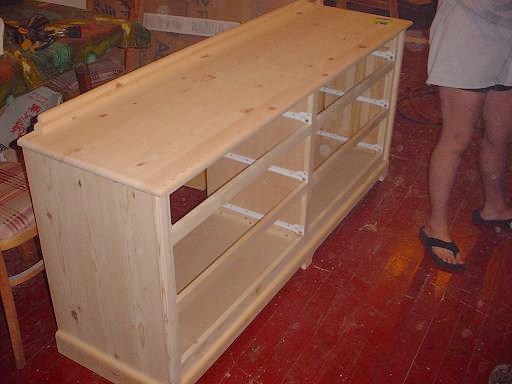 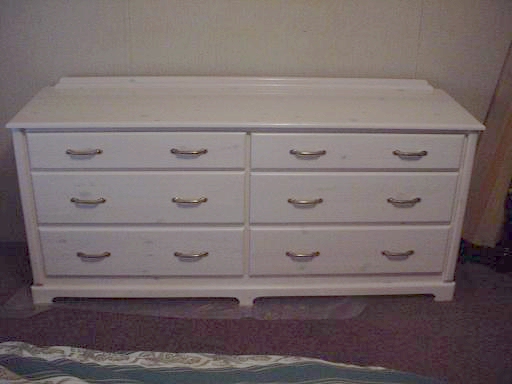 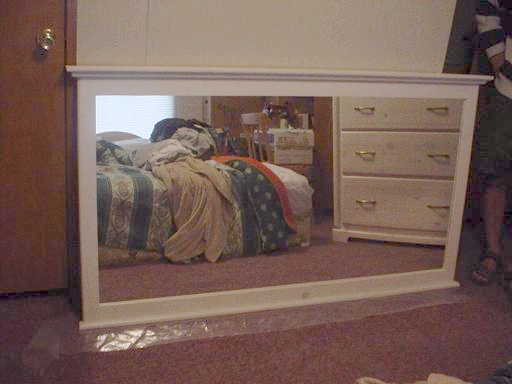 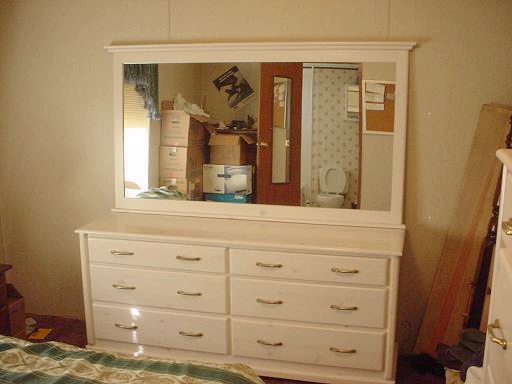 Posts: 2482
Location: FL
110
posted 7 years ago
The way this went down, the guy did not order the mirror.
I pulled it off the wall of a bathroom I was remodeling, had it sitting around. I based the dimensions of the dresser on the width of the mirror.
I assembled the mirror and gave it the same finish as the dresser thinking maybe I could get a few bucks extra.
When it was time to deliver, I took the mirror along with hardware attached so the mirror could be hung.
The decorative rail at the back of the dresser was not glued down. I could remove it if the guy wanted the mirror attached or add some glue at the last minute.
We tried the mirror on top of the dresser, he was sold.

My brother put in the tile and the flooring, needed a transition element.
There was no available commercial product that would have done the job.
I can't take credit for making this one, but I told my brother how.
Note the long narrow strip of oak winding along between the tile and wood flooring.
This was done by rolling out some brown paper to trace the shape.
Back at the shop, 4 pieces of plywood were connected to built a clamping jig.
Strips of red oak were ripped about 1/8 wide, 8' long. These were clamped into the jig one piece at a time. Each additional strip was glued in and clamped down. They were overlapped so the thing would not spring apart.
If effect, the whole thing was laminated into the desired shape.
the center strips were cut longer in order to form a T shape. The downleg of the T would be inserted into the space between the tile and wood flooring.
When the piece was cured, the top edges were routered into a pleasing shape for bare feet.

This piece is 33 feet long.
Getting it to the site was a miracle. It was tied on top of a truck, draped over the front hanging down close to the ground. Threw a sawhorse in the back of the truck with some carpet padding to give it support and keep it from getting banged up. Hooked up a trailer, threw on another sawhorse. Ran the strip over the back end of the trailer where it still stuck out 6 feet. Then drove it through town. I followed behind. Corners were a bear but we made it. At one sharp turn I had to get out, hold the end up while he drove real easy like. 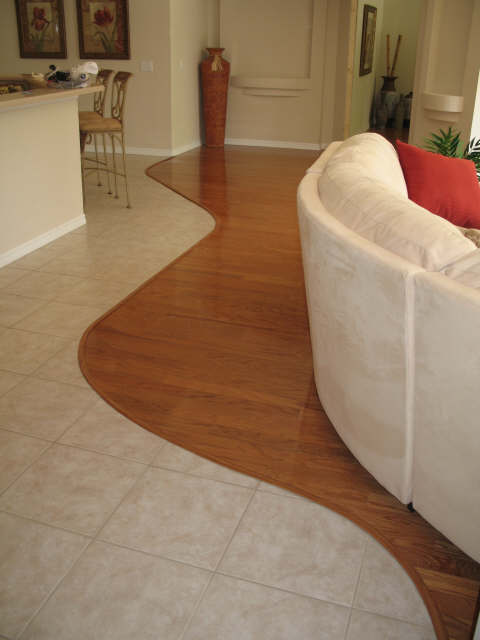