Wood burning and alternative heat questions for the experts

Christopher Robbins
Posts: 15
posted 7 years ago
Howdy...this is my first post here. Have questions for all the wood burning gurus:

I have a two-story home that we just bought and we live in western-central CO. We need two burning stoves, either wood, coal or pellet/corn (or combination). Each level has about 1,000 SF. The downstairs stove is in the center of the floorplan. The upstairs stove is on the side of the floorplan. Not sure what I should replace the current poor condition stoves with.

Fallen dry wood (mostly Juniper) is plentiful on our land, and purchased wood is about $160 a cord for dried/split evergreen types, delivered. Hard wood is harder to find and is more expensive, like $235+ for a 4x4x8 cord. Pellets are available for about $205 a pallet. I think those are 40, 40-lb bags.

I have never used burning stoves before so I'm getting smart on them presently. Was wondering if anyone could recommend what would be the most user-friendly and versatile due to our home design and needs.

I have two wood stoves that I will either sell or use outside if I can't sell them. If interested please email or call me. 719.930.7436 self.evident.truths@gmail.com One is a Vermont Castings Defiant Encore, red enamel exterior and pipe, built in 1991, has CAT element in it. The damper door assembly needs replacement (will not close anymore), and likely the CAT is old also. It still burns great but just not as efficient or long since the damper door does not close the flue so the stove can work in high efficiency mode and utilize the CAT. The other is a fairly new (built 2007) Scan 61 (made by a Scandenavian stove company). I have attached pics of both. This stove is in good working order and works well, but we don't like the looks of it.

I sort am leaning towards putting a pellet stove in the downstairs playroom where the kids sleep and a wood stove or alternative burning stove (like a Rocket Mass Stove) upstairs in our living room. I thought this configuration would give the most safety and be versatile. That way if we are ever powerless we can still use the wood stove for emergency heating/cooking. And the downstairs pellet stove could be used as-needed and not require so much tending to.

1. Are there any stoves I can buy that will burn all solid fuels to include wood, coal, pellets and corn?

2. I kinda like the longer stoves with the door in the front and the vent in the back. Are these good designs? I figure they would be best for loading and leaving the door open (because the wood is in the rear). A drawback may be harder to clean from the bottom-up due to the vent location being in the rear and the stove being longer. There is one here fore just $280 from Sportsman's Guide. It seems a tad small though:
http://shop.sportsmansguide.com/net/cb/large-cast-iron-logwood-stove.aspx?a=609100

3. A local wood stove place disuaded me from buying a CAT element stove because of the routine maintenance and he said the newer wood stoves with their reburning designs are almost as good as the CAT stoves. It also disuaded me from buying a pellet stove because of the cost of pellets and need for electric power (but we don't have that many outages).

4. I am considering not having glass in the front of the wood stove, because wood stoves I've seen are all black and the flames can't be seen very good anyway. I like the idea of seeing the fire but if the glass is going to turn black and be all cruddy looking I don't see how having the glass is beneficial if it can't be cleaned. I haven't tried to clean the stoves I have now...they are all black.

5. What are the blower options on newer wood stoves? I understand that pellet stoves have blowers on the assembly built-in. I have seen blowers on wood stoves that attach to the chimney pipe, but not sure of that design and safety. Do wood stoves have well designed blowers? Or should I just put a small fan near it to circulate the hot air?

6. I have these concerns to cover with whatever I buy: The upstairs hearth area is all protected, but the downstairs is not (see pics). I am concerned my wife needs a simple design that is difficult to mess up, as she is busy with kids and isn't as observant as I am...so I am concerned about fire hazards basically.

7. Should I consider an exterior stove that heats water/glycol and use radiators in the home to disperse the heat? Or some other form of dispersion like forced air from the exterior to the interior (if this exists)? Something like a Hardy Heater?

8. If I have the space should I consider a cooking wood stove so it is more versatile and holds more thermal energy to let off? The couple I have seen online seem to have a very small opening for wood. We would not cook on it much, only for fun or in outages or if were out of propane.

Your thoughts and guidance are very much appreciated! Chris[size=12]
[/size]
001_VC-Defiant-Encore-2140.JPG 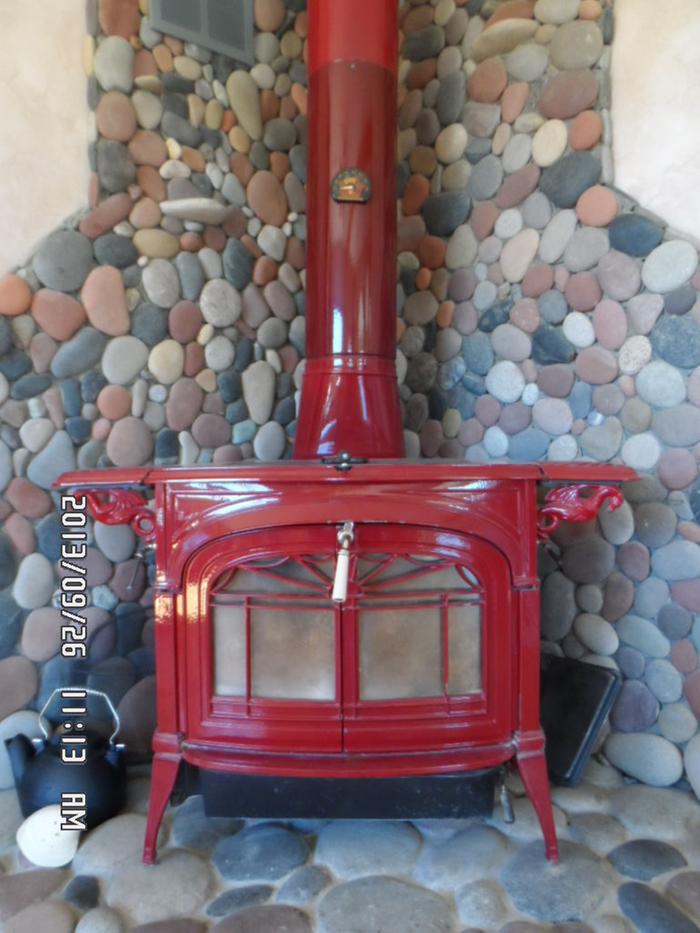 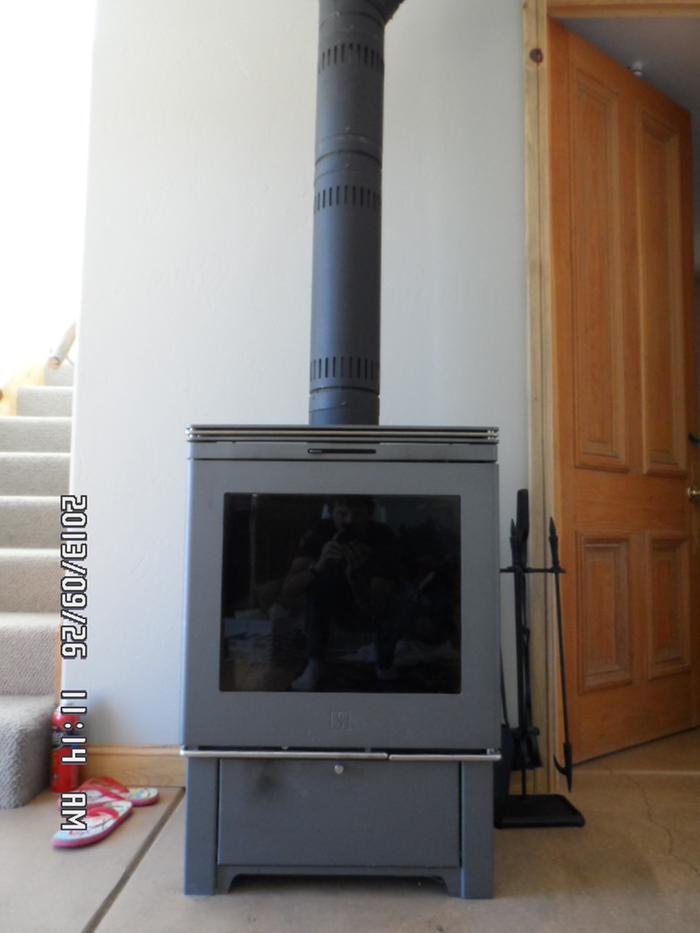 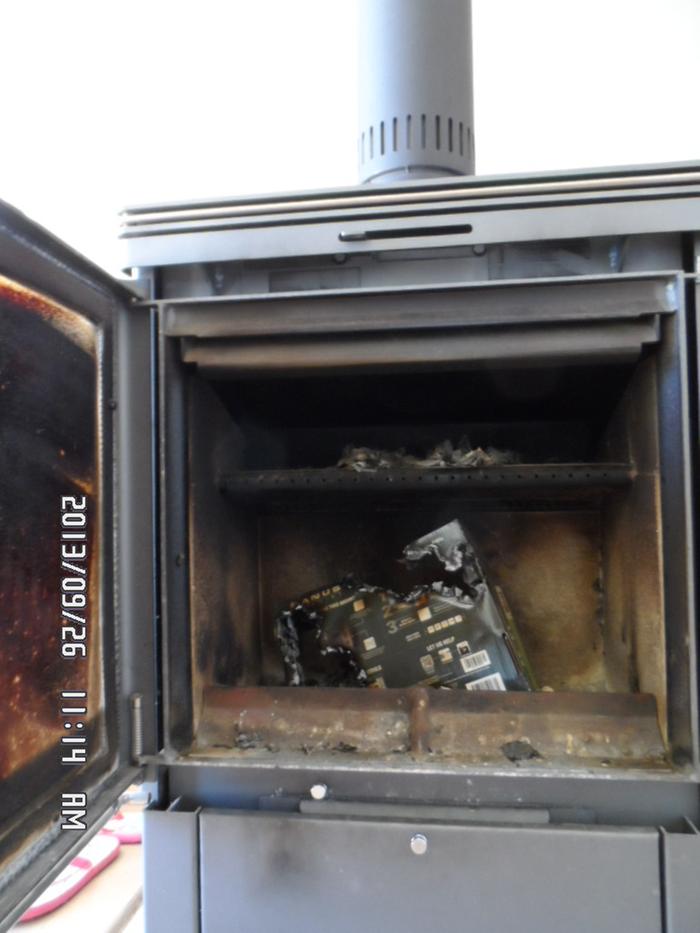 posted 7 years ago
You ask good questions, but I'm likely to steer you toward what I prefer, not necessarily what you want or need.

For example, I would not use a pellet stove that needed electricity, though I have seen one model that doesn't.

Instead, let me point you toward some folks who are very well informed about woodstoves generally.
They have a lot of good comparisons between models, some advice for dealing with the blackened glass problem, and in general if you want a woodstove they will have the details.
http://www.chimneysweeponline.com

They are located in Washington state, so you could conceivably buy from them. But they shouldn't be tempted to pressure you, or blow smoke rings around your concerns, like a local stove shop might that cared more about the sale.

I have lived with rocket mass heaters for about 5 years now, and I wouldn't go back. Probably saves me $500-1000 a year in heating bills / fuel, even though we live in under 1000 square feet. And it's way easier to run and more comfortable than the woodstoves and fireplaces I've experienced elsewhere.

Not sure why heating hot water is the deal-maker with the rocket stove. It's not something either of your existing stoves does, is it? Hot water adds a lot of complexity to a system, and complexity means more things can go wrong.
You might look at purpose-built stoves with that function for one of your stoves, and something with some thermal mass storage or self-operating capacity for the other.

Jeff Steigerwald
Posts: 12
posted 7 years ago
You may want to look at a Sedore 3000 multi fuel wood furnace. I am on my second season with mine and easily keep 2500 sgft very toasty. The Sedore is a downdraft/top loading stove that burns just about anything. I burn a combination of pine and various hardwoods harvested from my land. Like any stove, seasoned dry wood is best and that goes for the Sedore as well, since it is a down drsft design and burns from the bottom - less than perfect wood can be placed at the top of the stack to dry out in stove before being burned. The Sedore requires no electricity, does not contain a catalyst (the coal bed is used as a natural catalyst-very low emissions), can go for 16 hours on a load, can be cleaned while burning, and the pipe can be cleaned from going inside the stove. It does not come standard with a glass panel but does have the option to include a water heating tube that can be run to a hot water tank/ponic system. Might be worth a look.
R Scott
pollinator
Posts: 3777
Location: Kansas Zone 6a
173
posted 7 years ago
I understand wanting a pellet stove if it is going to be in a playroom, it is much safer--but it is still NOT SAFE unless you have trained your kids well. They still get hot enough to start a stuffed animal on fire pretty quick, but not so hot that kids still fear it. They also require very different venting, fine if it is an outside wall but difficult if not.

I have a wood cookstove that heat my water and LOVE IT, except when you have to crank the house to 90 with the windows open to get enough hot water for laundry and baths. If one is willing to tend two fires, dedicated units would be more efficient most of the time. It is one of those ideas we fall in love with, like life in a previous era, that isn't really as glorious or easy as it seems.

A glass window transfers heat much better into the room so it actually makes the stove a more efficient heater.

Two downsides to RMH's--they are heavy enough you need to think about your structure when building, and they are difficult to get homeowner's insurance coverage in some areas. And a third--they cost a lot in sweat equity.