Water management in the landscape with hand tools - video -

posted 7 years ago
Sharing a recent post to youtube that is a 2 part (long!) series discussing the water management strategy I'm developing at Edible Acres over 6 acres of quite flat, prone to flooding forest farmland, using only a spade. This 2 part video series is a walking tour and discussion of swales, water diversion and distribution approaches, silt catch, small scale pond and irrigation systems, flood mitigation and flood irrigation logistics with nothing more than a shovel. I don't even use levels, a-frames or anything, it's all empirical and feedback response driven. ANYONE can do this on their land if they can afford a shovel...

Steve Landau
Posts: 22
Location: Vermont
posted 7 years ago
Is there enough soil between the hugelbeds to cover the wood in this area?

I never seem to have enough soil to cover the logs/brush. 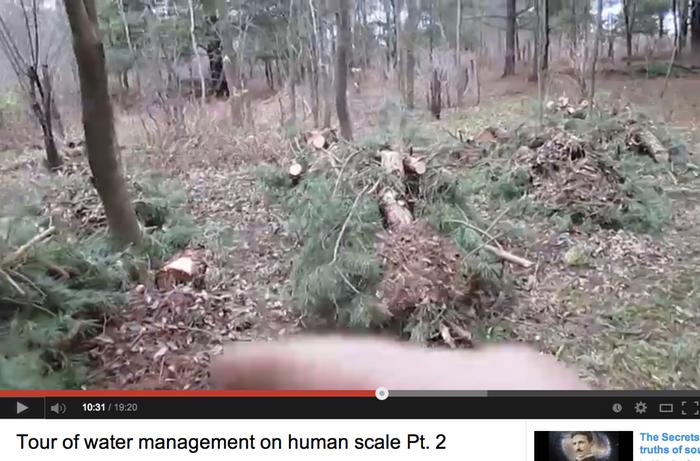 Jennifer Wadsworth
Posts: 2679
Location: Phoenix, AZ (9b)
195
posted 7 years ago
Well done! It's almost like you have a chinampa system going with your growing beds between bogs - great idea. Also loved that you used the actual water to find "level". Keep us posted on your progress once growing season starts.

Posts: 139
Location: Southern Oregon
36
2
posted 7 years ago
Great video! I really enjoyed how thorough you were in walking around the property. Felt like I was there.

Just built a small swale and hugel bed in my backyard, thinking about now adding a small pond.

This is great. I'm about to make an offer on 8 acres of "interesting" land, a long and narrow plot that sits in a depression between an elevated road and a small river. It's got some water issues in heavy rain events, but I think it's going to be totally workable with some permaculture design ideas implemented in smart gentle ways. Your video tours were very interesting, already making me rethink ideas about the property. Thanks for sharing them.
Tristan Vitali
pollinator
Posts: 362
Location: south-central ME, USA - zone 5a/4b
97
I like...

posted 7 years ago
I watched both vids so I guess I'm one of the winners! My property is very much like yours in that there's so little elevation change overall that the water just sort of sits, creating muck/swamp. Two things make matters worse though - the soil is very heavy clay (about 90-95% by jar test) and it was partially clear cut about 7 years ago with heavy machinery leaving ruts up to 3 feet deep in areas. Things are so anaerobic at this point that I can't put a shovel in the soil without pulling up sticks, logs and branches of completely unrotted slash.

At the top of the driveway, we have a large water seep / surface spring that was feeding a continuous mucky mosquito breeding ground all down the side of the drive to the road - that's been transformed with 4 "frog ponds" already (the frogs moved in within days) holding several thousands of gallons and eventually will include a larger 1/8 to 1/4 acre pond at the head of the stream as well. That side of the driveway was relatively untouched by the logging activity and has a healthy population of younger sugar maple and some 50+ year old white pine - the plan is to selectively cut and turn that area into an evergreen/pine guild, encouraging the seedling pines and eastern hemlock as well as bringing in korean nut pine. The richer loamy, draining soil of this area was already sporting some wild highbush blueberries, so we've transplanted over 50 young blueberries to this area taking advantage of the acid soil, eastern exposure and reflected light from the new ponds. Eventually, I'm hoping to fill this out to over 250 bushes with around 25% of them as domesticated cultivars.

The other side of the driveway collects a lot of runoff so there's 3 cattail ponds for sediment collection and biomass (tasty roots too) all along that edge, plus one small frog pond before we turn the water flow toward what will eventually be an acre or so of pasture area. There's then a longer pond with a deeper (3-4ft so far) channel holding about 3000 gallons that I'll be further expanding as time permits that's fed by this runoff stream - white and black willow are being selectively left around the perimeter which will be used for both goat forage and part of the living fence.

At the base of the property, all the water gets channeled to a single culvert under the road and let me tell you, we're talking probably 50gpm flowing through there most of the year. I'm planning a large-ish wetlands guild (cranberry, willow, persimmon, etc) through this area using a sort of gridded flooded hugel-mound system with near zero flow, allowing any sediment and nutrient that makes its way down that far to be captured.

So far, we have about 1 acre of water management at least started of the apx 9 acres they left a boggy, sodden mess. Already there were HUGE impacts on the mosquito population, wildlife in general and the quality of the water leaving the property. We've already created some buffer to heavy rains, which is always a sign you're doing the right thing.

I *may* eventually pick up a backhoe or small excavator as I do have plans for some larger/deeper ponds (so far totaling over 6 acre-feet of water) but everything else is being done with nothing but a spade shovel and a pick-axe. I may also invest in a camera to document the projects here at some point, like you're doing. So glad I'm not the only one out there busting backside like this