I'm a newbie here and had a question that I am hoping someone can answer. I am also quite new to the dehydrating thing. I've been dehydrating fruits and vegetables mostly. Today I began dehydrating one dish meals (recipes from "Backpack Gourmet", precooked then dehydrated) with the intent to use them as our main food source as we build our self-sustainable home. I will be doing this routine for the next 6 weeks in hopes to have enough meals to stretch 4-6 months (March-August). This will be a blessing if it works; it is just my husband and myself building our home and we both need to be focused on the build, not homemaking. So my big question is: Does anyone know the shelf life of dehydrated one dish meals? The backpack gourmet is presumably written for food that is being prepared and used on an upcoming/nearing camping trip, not for how I am wanting to use it.

Anyone ever been down this road before? I look forward to hearing your experiences~
John Elliott
pollinator
Posts: 2392
90
posted 7 years ago
Years.

There are three methods of making food last indefinitely: (a)freezing, (b)drying and (c)pickling. In each case, you lower the (a) temperature, (b) water content, or (c) pH until the material is no longer capable of supporting life. If it can't support life, there are no bacteria or fungi that can degrade it and spoil its nutritional value. Salting is a special case of (b) drying, because in salted fish for example, the salt draws out all the water and the fish fillet can no longer support any microbial life.

Food that was found as part of Scott's failed Antarctic expedition was still edible and nutritious decades later -- when it was finally thawed out. Civil war 'hardtack' biscuits had an infinite shelf life. Because they were just flour and water that was cast into a brick and dried (baked) until they had no moisture to support life. They had the shelf life of a piece of wood (and probably tasted similar).

The only thing that can degrade dried or pickled foods is temperature, but there you are talking about chemical degradation, not microbial. If dried food or a jar of pickles is left out in the sun in Death Valley, the hot sun may cause oxidation to happen, and that is what makes fat molecules go rancid and proteins to denature. They would still be edible (no danger of pathogenic microbes), but they would probably taste nasty.
wayne stephen
steward

Posts: 1748
Location: Western Kentucky-Climate Unpredictable Zone 6b
109
posted 7 years ago
Hadalinda : What is the method by which you are dehydrating one dish meals ? That's intriguing . Can you post a sample recipe with instructions ? What kind of equipment do you need ?

Hadalinda Mir
Posts: 6
1
posted 7 years ago
I've been using the Excalibur 9 tray dehydrator and also a Nesco snack master pro; we purchased the fruit roll sheets separately. For the Nesco, the inserts are sturdy and have a lip which is perfect for dehydrating liquidy things. We use the Excalibur for the dishes that are more "set" and not runny, the sheets are flimsy and have no lip. Attached is an example recipe out of the book. 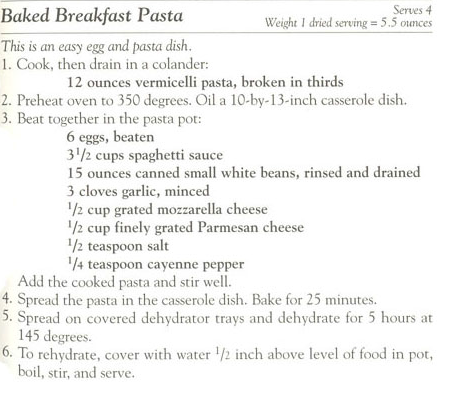 John Elliott
pollinator
Posts: 2392
90
posted 7 years ago
And how is this dried pasta fagioli? Does it keep a nice texture after it is reboiled?
Armando Quinn
Posts: 13
Location: Fresno County, California
1
posted 7 years ago

John Elliott wrote:And how is this dried pasta fagioli? Does it keep a nice texture after it is reboiled?

Hi, John. I can quickly answer for Hadalinda, since she is right here in the same room with me, busy making some meals to dehydrate. She asked me to answer as she's hard at work and I'm here on the computer.

The quick answer is.... we don't know yet. We just started dehydrating fruits and vegetables only a couple months ago to have food ready for us while we build in the New Mexico desert. She just started preparing whole meals to dehydrate and we have yet to rehydrate any meals yet. We'll find out in February and March when we actually start eating these meals. One thing we have tried was rehydrating some crushed tomatoes that she dehydrated and that worked out great for spaghetti sauce.

As she said, dehydrating and rehydrating foods is a whole new world for her, as it is to me.

John Elliott
pollinator
Posts: 2392
90
posted 7 years ago
Do keep us posted, Armando, it sounds interesting. I use my dehydrator mostly for drying herbs for my herb tea blends, but the rest of the time it sits in the corner gathering dust.

I take that back, I've also used it as a fermenter for making natto. Keeps the soybeans at the perfect rotting temperature.
allen lumley
pollinator
Posts: 4154
Location: Northern New York Zone4-5 the OUTER 'RONDACs percip 36''
61
I like...

posted 7 years ago
Amando and Hadalinda : I have used the recipes from the 'backpack Gourmet' a lot (but a long time ago ) The only thing I can tell you is try the reconstituted
dish soon after you make it, this is your only chance of being sure that you WILL like it after a hard days work, Many a backpacker has travelled down that
road ahead of you, and everyone of them have stories of memorial flops and successes.

Many a story is told about the food picking up cents and flavors while stored at home before the 'Big Hike'! This can completely make the food inedible, soaps,
shampoo, cleaners, my worst case was Apple Oatmeal that smelled just a teeny tiny bit like Irish Spring :p) Good luck ! BIG AL

posted 7 years ago
I've dehydrated a lot of meals for camping/hiking trips - I have to say that I love it when compared to any kind of bought dried foods. I love the flexibility of controlling your own portion size, ingredients etc... Most commercial packet camping/hiking food is simply inadequate to fill me up when I'm working hard.

When camping you are trying to minimize all cooking inputs (fuel, number of dishes etc...) so simply boiling water and adding it to a complete meal works well. In the situation you describe however you might be better off dehydrating the main part of the meal but leaving the staple ingredients to cook at the time.

Something like a lovely home cooked dehydated pasta sauce (I've made a few batches of killer spag bol - secret is plenty of worcestershire sauce and a couple of chillis) that you rehydate to go with pasta that you cook from the packet. You get the benefits of convenience in not needing to cook a whole meal on a busy day, but don't need to run quite as much bulk through your dehydrator now. If you are just drying the bolognaise sauce and not the pasta itself you can probably process 3 times as many meals at once. Likewise throwing a few spuds in a pot to boil while your tasty bits rehydrate is quick and easy too.

I'm my experience things like pasta do not always dehydrated and rehydrate evenly - I've ended up with the odd crunchy bit!

I've had some fantastic meals, some "meh" experiences and one or two "why did I ever think THAT would be a good idea". My attempt at sweet potato mash for example was disgusting, but my lemon chicken and rice was great.

Don't forget that you can also do puddings - chocolate sponge cake was a winner. It dries hard and looks unappealing but when softened it is just like eating mushed up cake. Stewed fruits and custard.

Armando Quinn
Posts: 13
Location: Fresno County, California
1
posted 6 years ago
I would like to thank all of you who have given input on your experiences. We both can handle the occasional crunchy or soggy pasta, or food that doesn't taste too great. Our concerns were that it might go bad in a few weeks. It was encouraging to hear that it should last for years if the water is completely out. I think there may have been one or two meals that we couldn't eat because of them not being properly dehydrated.

Hadalinda dehydrated many meals in December and January. We've eaten some of the meals since then. It's difficult to rehydrate meals to perfect texture. Usually, noodles are more wet than you would normally eat when cooking fresh. Also, it's difficult to get the exact amount of water correct without putting too much. Despite these minor issues, it's all still edible and makes for an easy meal in five minutes. It's very convenient for those days where we're just too tired at the end of the day to put much thought into food. Since I'm not a great cook myself, I get to tap into Hadalinda's hard work she did earlier in the year by simply putting one of her dishes into boiling water. Just last night, we pulled out a tomato and pesto rigatoni dish and rehydrated it. It tasted great. It's working out that we have all this extra food, since we are on an extremely tight budget. We have been living out of our truck camper on 10 acres since February, while all of our storage is in a cargo trailer on our land. Despite the hundred degree weather, the cargo trailer has managed to keep our stored food at a decent temperature. We still have a couple bins full of dehydrated meals, veggies, and fruits that will feed us on the days we are completely out of money.