in 2009 most child abuse is from women

posted 7 years ago
Spotted this today 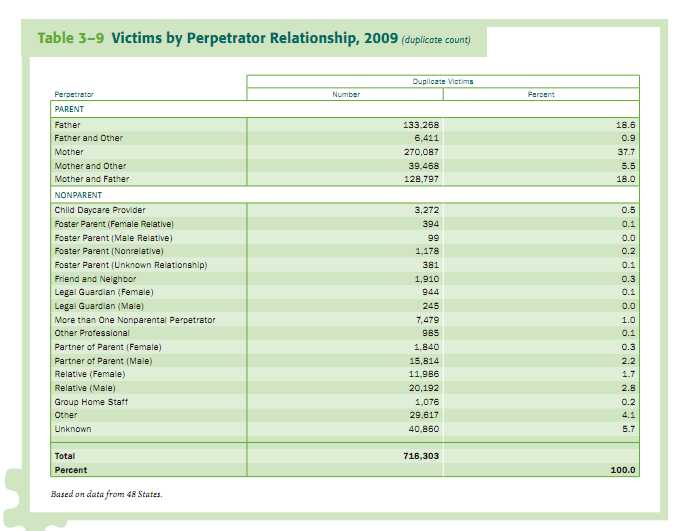 R Scott
pollinator
Posts: 3794
Location: Kansas Zone 6a
192
posted 7 years ago
If you look at the number of mother-only "families" it shouldn't come as a surprise.

David Livingston
pollinator
Posts: 4328
Location: Anjou ,France
245
posted 7 years ago
It would be very interesting to know what type of abuse we are talking about here .
For instance neglect ? physical abuse ? Sexual abuse ?
In some countries its illegal to hit your child even once .

R Scott
Please could you explain your statement as I am unsure what you mean .

posted 7 years ago
You can find more recent data here.

This covers all types of abuse and 60% is plain old "neglect." The age group most effected is birth-1yr.

I agree with R Scott. The rate is skewed due to higher levels of single female parents.

David Livingston wrote:
Please could you explain your statement as I am unsure what you mean .

I think what he meant was that since there are more female caretakers then even if the abuse was 50/50 by sex, more women would have abused in percentage terms.

I had to cut my post short because the cows were mooing for food. So it occurred to me, 99% of farm animal abuse is probably committed by farmers. I mean, yeah, the odd non-farmer will occasionally tip over a cow, I guess. But someone might use that stat to tarnish all farmers.

That one stat about "most child abuse is from women" is certainly plucked out of context. The interesting thing about the 2012 data is the conclusion - there was less abuse in 2012 then in the four prior years. I don't particularly believe it but I do wonder if there was an under tone of partisan snipping going on. I don't particularly have a dog in that race, but that's what it seems like.

posted 7 years ago
I wonder what the number would be if you limit the sample set to just those homes with a mother and father?

posted 7 years ago
There are still so many variables! Type of abuse for one.

But even if we just looked for neglect, in dual parent homes, I would think the stay at home parent would be more likely to abuse (or be reported), regardless of their gender, just because of the percent of time they are with the child.

Slightly aside, from the same report:

I wonder what percentage of adults would say their childhood was 100% abuse free?

R Scott
pollinator
Posts: 3794
Location: Kansas Zone 6a
192
posted 7 years ago
I have been a foster parent and seen the inside of the system. Their statistics are as honest as any .gov statistic.

They are just reporting on symptoms, anyway. One report theorized that poor people had a higher incident of abuse reported because they spend more time with mandatory reporters while applying for welfare. Seriously.

Majority of kids are born into single parent homes and raised by their mothers. I forget the percentage but it is staggering.

What counts as "neglect" is open to interpretation. Like dealing with any low-level .gov agent, it has more about whether they like you than what the law says. Some are lazy, some are on a mission to right the wrongs of their childhood, but most are overworked and need to "go with their gut" because that is all the time they have. Often that neglect is not having enough food in the house (the children were not malnourished, just didn't have a ready supply of snacks), or not having an approved babysitter while working (like having the 8 YO watch the 3 YO).

The system is doing more harm than good to the "neglected."

Dale Hodgins
Posts: 9002
Location: Victoria British Columbia-Canada
692
posted 7 years ago
I was involved in respite care which gives a break to parents who are at risk of snapping for various reasons. My friend Doug was the father of the only kid that we couldn't deal with at all. The child had serious mental issues. He only came over once. The social workers determined that Doug has excellent coping skills and they reduced the help given to his family.

We also looked after perfectly normal children whose parents (mostly single mothers) managed to get help. One took this opportunity to visit boyfriends. She produced two more kids in two years. One of the last kids we looked after was one of those babies. She needed a break from him, to visit a boyfriend in Vancouver.

Birth control. My nine year old daughter asked us why the mother doesn't use birth control.

posted 7 years ago
I did a year of service in ameriCorps at a local homeless shelter/ drop in center for youths & they did respite too. Mostly low income kids but not always. They generally preferred to stay at the shelter than go into foster care because they didn't want to replicate their home experience.

The place was closed down because it was the middle option. The state paid lots of money per dium for kids to be in a lock down facility, and not much at all for emergency foster care.

There was also resentment from the local Boys & Girls club, if you can believe that. The felt like they should be the only hang-out option, even though it was mostly different populations being served. It was one of those, what Paul calls "hate in the name of love" type of deals.

Diego Footer on Permaculture Based Homesteads - from the Eat Your Dirt Summit
will be released to subscribers in: soon!
click here for details