The cause of gluten intolerance??

John Elliott
pollinator
Posts: 2392
95
posted 8 years ago
I found this chart on Mother Earth News to be most interesting: 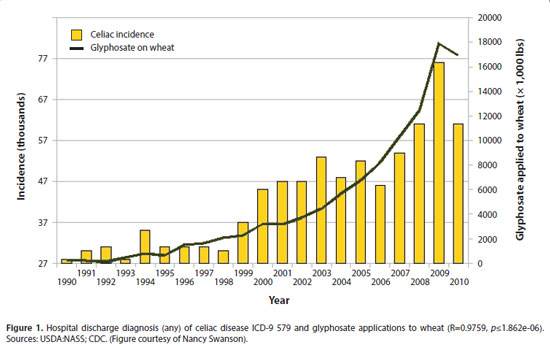 You can read the whole article here, but suffice it to say that it is NOT positive PR for Roundup.

As I have said before, a little bit of scientific knowledge is a dangerous thing -- when some whiz kid has figured out how his new technology will make life easier for everyone so that you can have your cake and eat it too, it's a good idea to ask what he frosted the cake with.

And for the people who prattle on about "correlation is not causation", you can have my Roundup ready pancakes.

posted 8 years ago
I have been hanging on to an article for some time now that I had intentions to eventually blog about. I am going to post it here however as it directly relates to the title of this forum posting. It points to some other factors of modern grain and how they differ from older varieties. http://www.underwoodgardens.com/3610/whats-wrong-with-our-wheat/

posted 8 years ago
The flip side of this kind of correlation is that there can be other causes for both patterns - for example, ceoliacs disease is being diagnosed much more readily as doctors get better at testing for it and public awareness is raised.

You match that same pattern of ceoliac disease against computer ownership.

I'm not arguing against the pattern just pointing out the need to be careful equating correlation with causation.

Michael Cox wrote:
I'm not arguing against the pattern just pointing out the need to be careful equating correlation with causation.

I'd mail you my Roundup ready pancakes, but will your government allow them in?

posted 8 years ago
For an absurd example of causation vrs correlation...


People more likely to die in hospital than anywhere else.
Banning hospitals will reduce the death rate.

The fallacy here is that the hospitals do not cause the death rate, but that people who are in hospital are usually sick. The hospitals act as a focus for unhealthy people.

We also have the question of whether the figures measure incidence of ceoliac disease or diagnosis of ceoliacs. Getting better at diagnosing it does not mean that people are getting less healthy. These days the genetic markers for ceoliacs are pretty well understood and you can have different severity of ceoliacs based on how many faulty genes you have. Low severity ceoliacs were previously much less likely to diagnosed, but now a simple blood test is all that is needed.

"The two main classes of plant allergens are the stress-induced chitinases, and seed storage proteins, such as gluten. The chitinase allergens are responsible for reactions to latex (which is secreted by rubber trees in reaction to a wound), bananas, avocados, many other fruits and vegetables, and some types of wood and other plant materials. Intensive agricultural methods are increasing the formation of the defensive chemicals, and the industrialized crops are responsible for the great majority of the new allergies that have appeared in the last 30 years.

The presence of the chitinase family of proteins in humans was first discovered in the inflamed asthmatic lung. It was then found at high levels in the uterine endometrium at the time of implantation of the embryo (an inflammation-like situation) and in the uterus during premature labor. Since estrogen treatment is known to increase the incidence of asthma and other inflammations, the appearance of chitinase also in the uterus in estrogen dominated conditions is interesting, especially when the role of estrogen in celiac disease (in effect an allergy to gluten) is considered. Celiac disease is more prevalent among females, and it involves the immunological cross-reaction to an antigen in the estrogen-regulated transglutaminase enzyme and the gluten protein. The (calcium-regulated) transglutaminase enzyme is involved in the cross-linking of proteins in keratinized cells, in fibrotic processes in the liver, and in cancer. (People with celiac disease often suffer from osteoporosis and urinary stone deposition, showing a general problem with calcium regulation.)

This means that estrogen and stress cause the appearance of antigens in the human or animal tissues that are essentially the same as the stress-induced and defensive proteins in plant tissues. A crocodile might experience the same sort of allergic reaction when eating estrogen-treated women and when eating commercial bananas." http://raypeat.com/articles/articles/milk.shtml
Nick Kitchener
pollinator
Posts: 846
Location: Thunder Bay, Ontario, Canada
151
posted 8 years ago
Well it would be interesting to look at if there is a correlation between the consumption of soy in foods (dietary estrogen), and the incidence of celiac. Soy is often used as a filler for processed foods like bread, pasta etc...
Michael Cox
pollinator
Posts: 3434
Location: Kent, UK - Zone 8
552
I like...

posted 8 years ago
There is a fallacy in statistics to do with measuring too many variables then pointing to one anomaly. It is equivalent to getting a machine gun, firing it at a wall, examining your bullet spread to find three holes close together and then drawing a circle around them and declaring "bulls-eye". The pattern fits but doesn't have meaning. Likewise there are major issues associating correlation with causation - correlations don't necessarily have any meaning.

Michael Cox wrote:There is a fallacy in statistics to do with measuring too many variables then pointing to one anomaly. It is equivalent to getting a machine gun, firing it at a wall, examining your bullet spread to find three holes close together and then drawing a circle around them and declaring "bulls-eye". The pattern fits but doesn't have meaning. Likewise there are major issues associating correlation with causation - correlations don't necessarily have any meaning.

This is true of almost every study these days from climate change to communications theory. The problem with having TOO much data and processing power is computers can curve fit to noise.

Thumbs up Nick, for the right attitude.

One thing that is bothersome about introducing new technologies to the mass market is that it is only in retrospect that we can see what the problems are. Who knew when the internal combustion engine was developed that enough of them would change the chemistry of our atmosphere for the worse?

But there is a cure for "measuring too many variables then pointing to one anomaly", and that is the painstaking method of Principal Component Regression. Pity that it isn't more well used.

posted 8 years ago
Ah, but there is a big difference...

We see a correlation between swales and groundwater recharge. We propose a hypothesis "swales increase groundwater infiltration and hence recharge". We set up an experiment to test our hypothesis and we confirm or refute the result. The point is that the interesting observation of correlation gives us something we can go on to test. An ground water recharge has been tested and repeatedly observed in practice, plus it fits with our broader understanding of hydrology.

With the initial proposal in this thread we went

Observation of correlation -> causation
The actual journal article itself appears to be a summary of anti-roundup articles from all over the place, touching lightly on different possible links to ceoliacs disease. A piece of good science would look to disprove their hypothesis rather than find lots related pieces supporting their argument. I can immediately think of a few ways to test this - compare countries with high roundup use with countries with no roundup use, compare historical data of ceoliacs disease vrs date of introduction of roundup in each country... these figures are beyond my personal resources to find but determined/funded researchers should be able to gather it.

Bryan Jasons
Posts: 62
Location: Maine
2
posted 8 years ago
We shouldn't dismiss everything observational on the grounds of "correlation isn't necessarily causation". I was going to propose that the glyphosate is simply a proxy for stressful growing conditions for the crop, the implication being that it's just a statistical association rather than a direct health risk, but it turns out the glyphosate itself is possibly estrogenic : http://www.ncbi.nlm.nih.gov/pubmed/23756170

On the other end of the spectrum there is an interesting study showing that it inhibits cancer cell growth, but it's funded by the department of defense : http://www.ncbi.nlm.nih.gov/pmc/articles/PMC3749059/

Monsanto makes round-up and previously worked with the department :

"Agent Orange was manufactured for the U.S. Department of Defense primarily by Monsanto Corporation and Dow Chemical. It was given its name from the color of the orange-striped barrels in which it was shipped, and was by far the most widely used of the so-called "Rainbow Herbicides".[4] The 2,4,5-T used to produce Agent Orange was contaminated with 2,3,7,8-tetrachlorodibenzodioxin (TCDD), an extremely toxic dioxin compound. In some areas, TCDD concentrations in soil and water were hundreds of times greater than the levels considered safe by the U.S. Environmental Protection Agency." http://en.wikipedia.org/wiki/Agent_Orange

It's likely that the studies are engineered to produce the desired results in both cases. In-vitro studies...
John Elliott
pollinator
Posts: 2392
95
posted 8 years ago

Michael Cox wrote: these figures are beyond my personal resources to find but determined/funded researchers should be able to gather it.

Perhaps you don't realize that to get that kind of funding in the U.S., you will be asking for a grant from a politician who transits the revolving door from working for the government to working for Monsanto. And however determined the researcher is, there are many ways that politicians and administrators have to keep untoward findings from seeing the light of day.
Bob Knows
Posts: 18
posted 8 years ago

Michael Cox wrote:Ah, but there is a big difference...

With the initial proposal in this thread we went


Yea, that goes on a lot. We now have that other topic about real science vs. pseudoscience.

These days we have a lot of people with political agendas and money who want to make more money by promoting bad science and bad conclusions. Separating correlations from science is difficult but needed.