My name is Chris and I’m new here so hello

I own a small farm in South America and I have a question to ask. The farm is 210 acres with about 35% of virgin Atlantic Forrest cover which I’m not touching, but it has a somewhat wet area of around 20 acres which is too wet for agriculture and too dry for rice production. This is a semi tropical area with lots of rain and it's not a wetland by any standards, just a land with high water table.

I can grow bananas (water hogs) or plant eucalyptus trees (timber trees in this area which are water guzzlers) to dry off the land and put it to good use, but I’m also interested in aquaculture as well.

If you were in my shoes, how would you go about it? I have no interest in back filling or draining the land because of the water table so I’m more interested in working with it rather than against it.

I would appreciate any suggestions or tips. You can see the wet area in the top left square on the map. 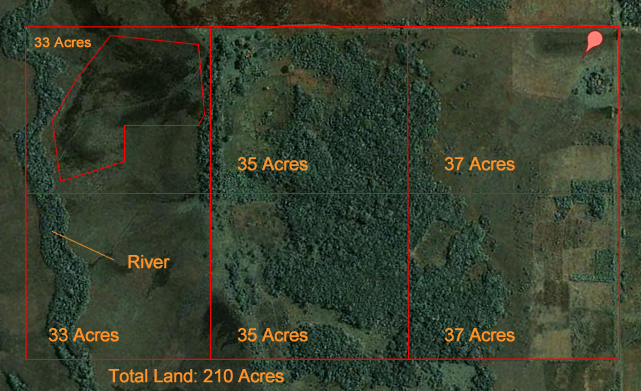 posted 6 years ago
Have you considered mushroom cultivation?

Also hugelkultur might be an option for you, with tall above ground beds.

Hugelkultur on 20 acres? That's a lot of raised bed

I'm in process of building mushroom houses (button mushrooms) on the higher ground where the red pin is complete with laboratory as this would be the first mushroom cultivation in the country.
Cj Sloane
pollinator
Posts: 3738
Location: Vermont, off grid for 24 years!
103
I like...

Chris Ssmith
Posts: 4
posted 6 years ago
Now that's interesting. I thought about making squares of 20x20 meters and digging drain channels in between, but I would have to divert the water somewhere and most likely the river down below. I don't use any chemical fertilizers so contamination wouldn't be a problem, but hard rains would wash off a lot of soil to the river.
Matu Collins
Posts: 1947
Location: Southern New England, seaside, avg yearly rainfall 41.91 in, zone 6b
79
I like...

Hugelkultur on 20 acres? That's a lot of raised bed

I didn't mean all 20 acres! It's one way to "use" waterlogged land and logs, if you've got em, to build soil. You have so much land to use.

Alder Burns
pollinator
Posts: 1600
Location: northern California
206
posted 6 years ago
How much of the land do you actually need to use? perhaps one solution is, wet or drained, focus your attention on a small area, particularly at first, and try out some techniques and plants. If part of the land is already in endangered forest, perhaps this can be allowed/encouraged to spread?
Becky Keith
Posts: 20
Location: Kelly , NC
posted 6 years ago
Hi Chris, I am also new here. Have you considered growing water plants to sell for natural ponds. To clean pond water. I was thinking of building a pond for ducks and when I researched the cost of water plants for the garden part of the pond I just about had a mild cardiac arrest at the cost of buying them. Perhaps if you grow those types of water loving plants you can sell to the small garden pond people or pet stores.

Allan Laal
Posts: 33
Location: Estonia
posted 6 years ago
you can grow lots of energy willow Salix Viminalis there. They like waterlogged soil and they'll give you fodder, extract all the heavy metals from the ground, will give you mulch and fuel and sticks and so on

posted 6 years ago
A lot will depend on the exact contouring of your land, but if you have a naturally damp area could you make it lake, or series of ponds?

Posts: 856
Location: South Puget Sound, Salish Sea, Cascadia, North America
15
posted 6 years ago
I suspect that a lot of good design, or knowing what techniques to employ, or what management units to develop, depends on context.

1) If you have seasonal inundation that affects vegetation and soils you have a "wetland." With a wetland next to a river, I suspect you might have a floodplain wetland. As such it likely has a number of ecological functions that you'd want to explore and preserve, like denitirification, flood storage, groundwater recharge, seasonal wetland habitat services to specific interesting species, etc.

2) Every wetland has water going in (sky, surface, ground), and water going out (same routes). In a floodplain, seasonal high water, lowering after the rainy season makes sense. Your air photo suggest that some of your land might already ditched to some extent, perhaps altering floodplain functions.

3) In general, you floodplain wetlands are the last stop for nutrient removal before your water flows get into the aquatic ecosystem. Perhaps not the best place to start loading nutrients in an intensive aquaculture system, maybe a good place for reed production, or seasonal forage or floodplain forestry, or coppice.

4) I suspect zone matters. If this is far from your zone 1, than forestry, silvopasture, or seasonal foraging, and wildcrafting may be the best use. If this is near your homesite, than maybe more intensive techniques (like chinampas) might makes sense... if you were going to put the labor into chinampas, I expect you'd want a high value crop out of them.

Sorry for the late reply as I thought I would get notifications of new post but it didn't happen. Lots of good info. Let me elaborate on the zone a little:)

The land is in Paraguay, about 100 Kilometer from the capital city, Asunción. Top right corner of the map is where the buildings and other installations are and the power extends until the tree line to the flood plains. Most of the area is high but the region itself has a lot of low spots like this close to rivers and streams. The weather is semi arid to tropical with lots of microclimate. The rain fall average is very close to southern South Carolina for example, around 50-55 inches of rain per year but in the wet season, all bets are off depends on the year. There is no real winter here and frost is almost non existence.

Major crops in this area are Banana, Pineapple, beans, sugar canes, Mandioca, and lots of fruits. The soil is very fertile, somewhat of a sandy loam and more clayish closer to the river. You can spit on the ground here and something will grow and most farmers don't irrigate and majority of work is done by animals and hand.

It is kind of the exact opposite of North America in weather, seasons, and problems. For example, a green house would be more beneficial if cooled rather than heated and the major problem would be over watering rather than lack of water.

Soybeans are extremely lucrative here and almost everyone is clearing their land to grow more damn soy or sell it to others because they can't afford modern farming equipment. Farmers are extremely poor here and the main cause is the middlemen who buy their crops dirt cheap and sell it in the capital city for arm and a leg since the farmers have no means of transportation and marketing.

My goal here is establishing a CO-OP system of farms to help out the farmers sell their crop and actually make profit out of it rather than clear cutting the forest and flooding more areas. The labor is extremely cheap here (7 dollars per day for a skilled worker) and the exploitation of these poor people has made it even worse.

If it was a hobby farm, I would just plant some native trees or make a pond for recreation and call it good, but I’m trying to put more people to work so every inch of usable land is crucial to its outcome.

Hope this helps:) Thanks again for all the ideas and keep'em coming.

steve temp
Posts: 41
Location: Costa Rica 100 meters above sea level, Tropical dry forest
1
posted 6 years ago
Chris do you live on the property? How long have you owned it and have you been around for the rainy season? Does it flood?? Does anyone know of present day Chinampas in use and if so where?
Tilapia ponds might work if it doesn't flood and you have a water source, flowing preferably. I don't think it would be too dry for rice, rice doesn't need as much water as people think. Bananas grow well in damp soil and provide food and fodder and hold the land intact. I really like pigeon pea also. Maybe sugar cane would like the moisture also. Interesting property though not small by my standards.
Cj Sloane
pollinator
Posts: 3738
Location: Vermont, off grid for 24 years!
103
I like...

Chris Ssmith wrote:
The land is in Paraguay, about 100 Kilometer from the capital city, Asunción.


Consider adding your location to your profile.

John Elliott
pollinator
Posts: 2392
88
posted 6 years ago
Have you thought about taro? It will love the high water table and even if it is standing in a few inches of water it will do fine. Here's a video of a taro farm in Hawaii:

If it's not currently a popular crop in Paraguay, I don't think you will have any problem introducing it. The leaves cook up nice into callaloo, you can boil up the root and make poi, you can slice the root and deep fry it like potatoes to make taro chips. There are a lot of ways that it can fit into almost any ethnic cuisine.