posted 8 years ago
I would like to encourage people to take a soil sample, mix it with water in a mason jar, let it set for a couple of days and then post the results here.

I would like to use these pictures in the upcoming "World Domination Gardening" 3-DVD set.

How about two cups of soil, then fill the rest of the mason jar with water? I've been told a drop of soap helps.

Lindsay Hodge
Posts: 10
posted 8 years ago
We'll Jon the fun! How much dirt and water, etc.?

We want to build a haven of learning, responsibility, love and abundance.

To find out more about us, visit:
www.havenhomestead.com

Quintin Holmberg
Posts: 32
Location: Minnesota
3
posted 8 years ago
Could someone post a couple informative links on this mason jar soil test concept for us newbie to educate ourselves with?

Becky Mundt
Posts: 50
Location: Cascadia Zone 8b Clay
8
6
posted 8 years ago
We did this test last year. If not, I'll do it again.
We followed the instructions in The Intelligent Gardener and it was quite hysterical.
We set the jar on the counter for TWO WEEKS.
It never cleared even one tiny bit.
Our soil is - wait for it - ALL CLAY.

Our swale needed drainage holes. rofl.
We are putting in french drains and swales both because the water
doesn't move otherwise, except in deep gullies worn over the years
of no one doing anything on this property.
We won't need pond liners, either.

For the gardens and planting areas we are building up from the top of the
existing soil. As he said in the book - if it's more than 3/4 clay, just consider it the
subsoil and build from there... so that is what we are doing.

If we didn't take pictures I can do it again for you. I'm sure it will be the same!

Believe in a better world. then follow the inspiration to create it!

posted 8 years ago
I can contrast my sandy soil and my clay soil.

David Livingston
pollinator
Posts: 4328
Location: Anjou ,France
246
posted 8 years ago
Er.... Mmmmmmmm I am not sure what a mason jar is ?
maybe we call them something else here in France

Olivia Helmer wrote: i wonder if mason is a brand

Sort of...They were invented/patented in 1858 by John Landis Mason. The most common U.S. brands of Mason jars are Ball and Kerr. 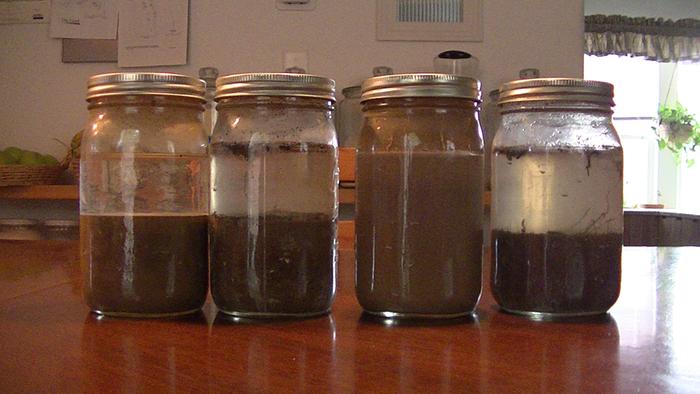 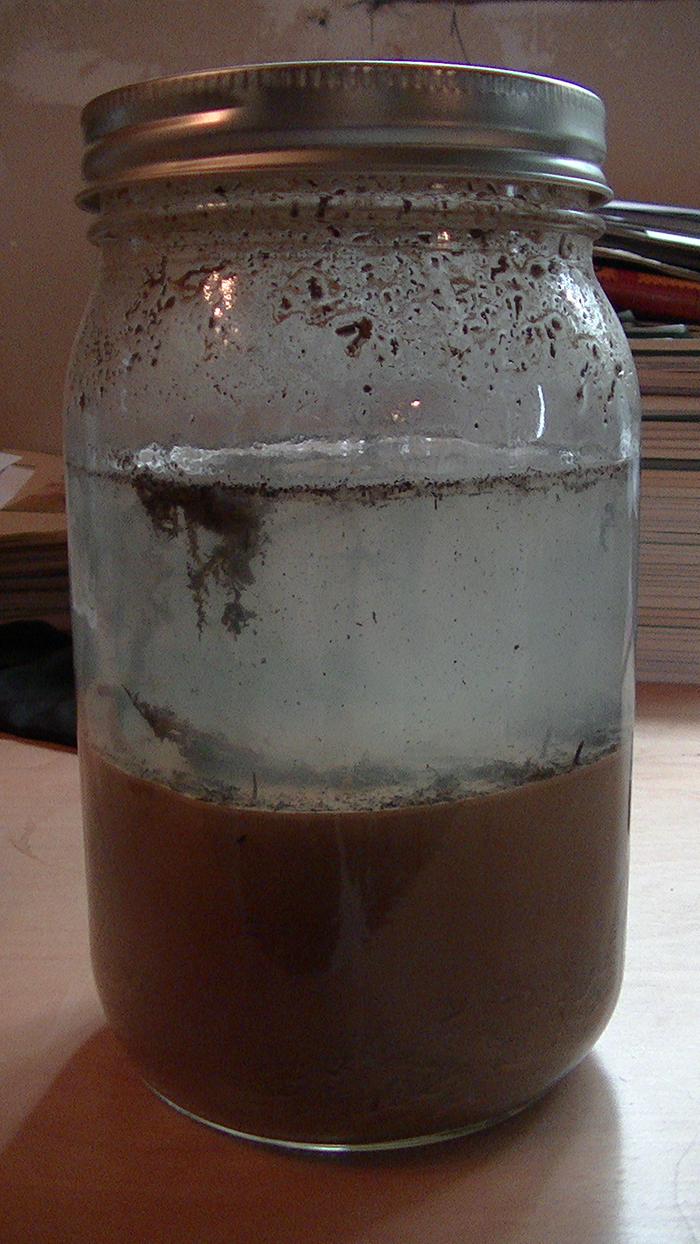 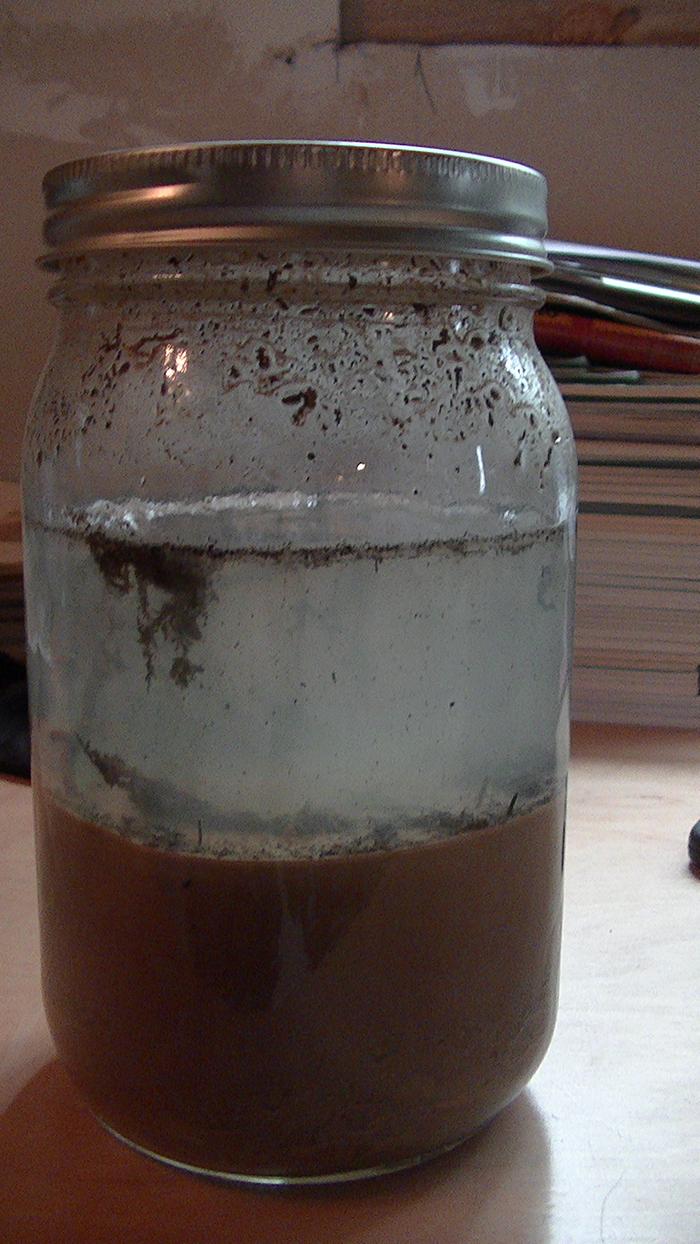 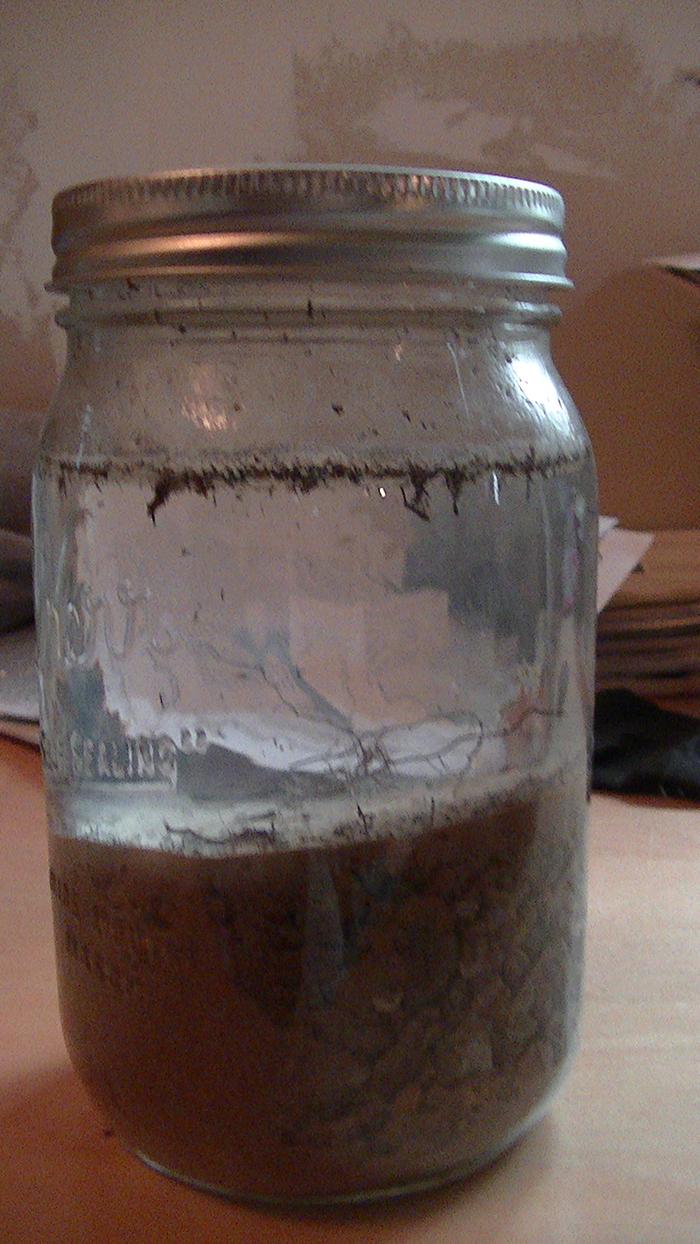 posted 8 years ago
Here are our from last year - 3 different areas on our VA clay goodness.
mason-jar-soil-test.jpg 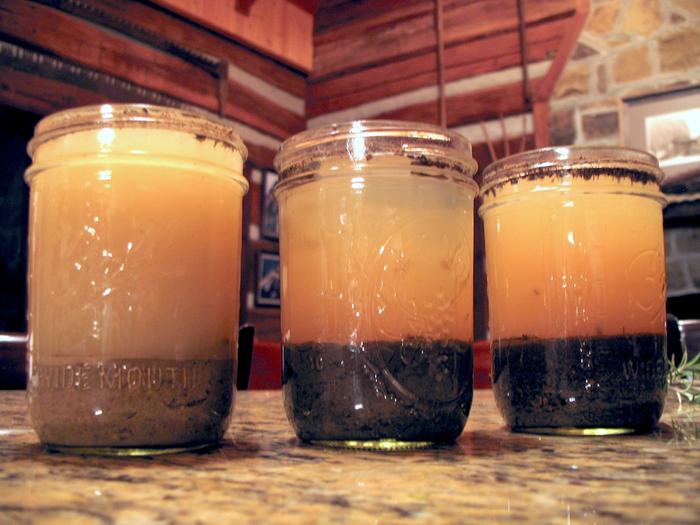 OK, heading out. Quart jar, half water, how much soil? Drop of soap?

Gail Saito
Posts: 105
Location: Jacksonville, OR
5
2
posted 8 years ago
soil sample from the Rogue Valley, OR

Upon closer look, there appears to be a gritty level at the bottom and a muddy one above that, then the water and organic matter. I am guessing the level above the grit is the clay. 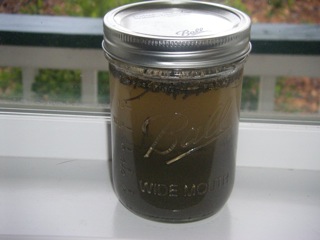 Judith Browning
Posts: 8011
Location: Ozarks zone 7 alluvial,black,deep clay/loam with few rocks, wonderful creek bottom!
1787
4
posted 8 years ago
half soil and half water, shook it up and waited a couple days, soil from the yard and two main growing areas. Pictures have one with a back drop that shows the soil layers and particles better, I think, and one without.
dirt-001.jpg 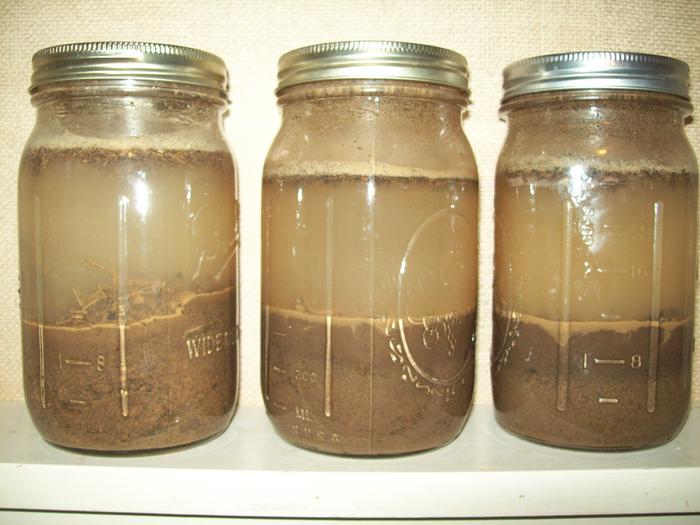 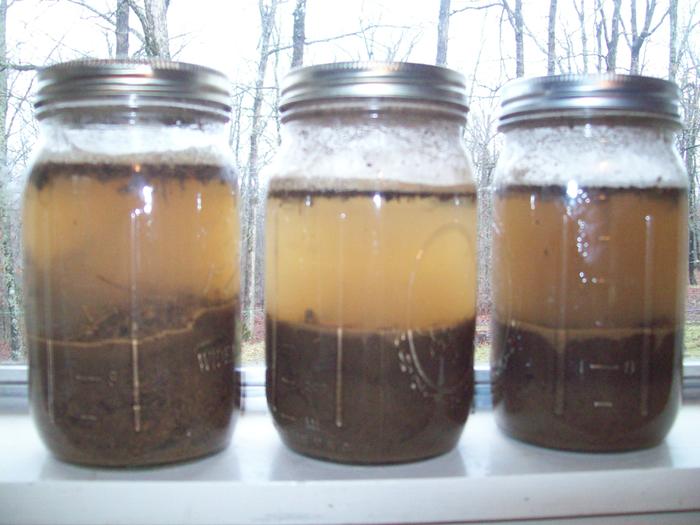 Meryt Helmer
Posts: 395
Location: west marin, bay area california. sandy loam, well drained, acidic soil and lots of shade
16
2
posted 8 years ago
I have been waiting to see if the water would get clearer but I guess this is as clear as it wants to get. I will leave it though and post another picture if it clears up significantly more.
This is from my backyard which is a Bishop Pine forest in California.

joseph wittenberg
Posts: 57
Location: aguanga, california
2
posted 8 years ago
This has been sitting for 4 days. Taken right outside of our back door in Aguanga, California
soiltest-jar.jpg 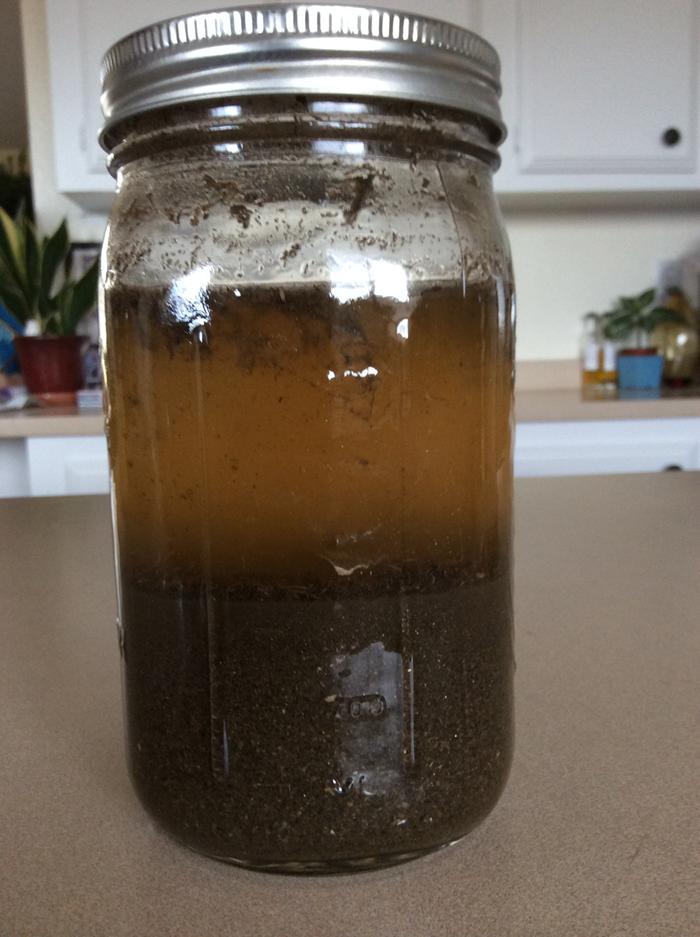 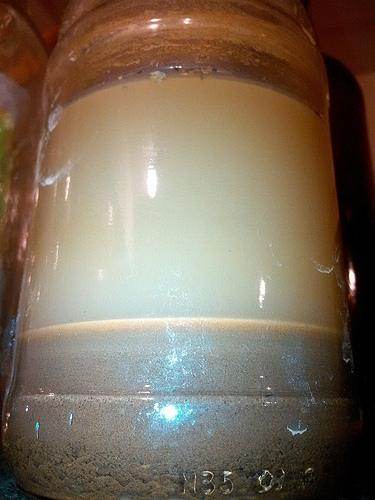 Daniel Kern
Posts: 198
14
posted 8 years ago
This is 3 soil samples from 3 distinct locations. The 1st sample on the left has No growth whatsoever on it, and there are a few patches nearby that are similar. the muddle sample is regular garden soil that is lacking in some regards. the sanple on the right is in an area that does not drain quickly. water will pool up here for a week or more.
jar-soil-test-3.jpg
jar-soil-test-3a.jpg
jar-soil-test-3b.jpg
Michael Helmersson
gardener

posted 8 years ago
I had expected a high amount of clay but my jar cleared up pretty quickly. The material at the '5 min' line settled down to the current state in a few hours. I'm not sure if there's any clay in here. Am I wrong to consider this a sandy loam? 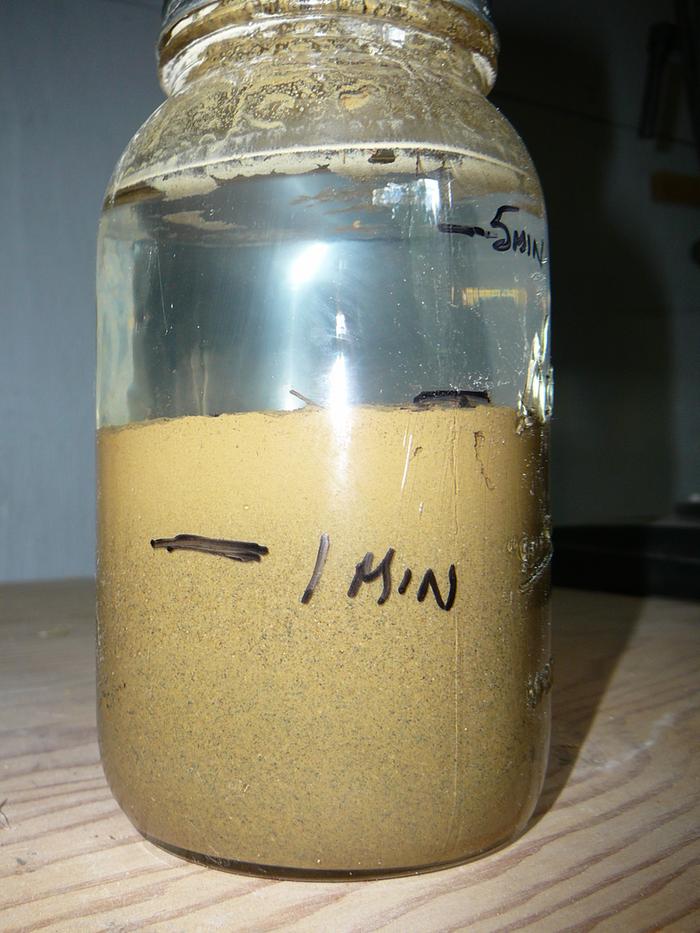 Posts: 5780
Location: Cache Valley, zone 4b, Irrigated, 9" rain in badlands.
2377
posted 5 years ago
I like the instructions for this test which were published by Colorado State University Extension:
Estimating Soil Texture -- Sandy, Loamy, or Clayey?

It recommends measuring the sand layer after one minute, and the silt level after 2 hours, and the clay layer after days or weeks.

Posts: 5780
Location: Cache Valley, zone 4b, Irrigated, 9" rain in badlands.
2377
posted 5 years ago
Here's what the mason jar soil test looks like for my kitchen garden, I started the test 2 days ago...

posted 3 years ago
I found this thread when I was searching for soil texture testing. Here is the worksheet we used in my permaculture class. I'm wondering if I need to get the small lumps out of the soil I'm testing. It has been sitting for a few months since I got back from the farm. I just used a potato masher on it but it has tiny hard bits of soil in it still. It is a mix of 10 or 15 samples from the area where a garden will go. i can put the soil in the Ninja blender.

1. Determine and calculate the amount of sand, silt and clay in a given soil sample.
2. Determine the textural class by using a textural soil triangle.
3. Recognize the differences in soil textures.

1. Place a 1/2 cup of soil sample in the jar. Add 1.5 cups of distilled water and 3 tablespoons of the Calgon solution.

2. Cap the jar, and shake for 5 minutes. Leave the jar on the desk. Allow it to settle for 24
hours.

3. After 24 hours, measure the depth of the settled soil using the metric system. All soil particles have settled. This is known as the TOTAL DEPTH. Record and label the total depth of soil.

4. Shake the jar for another 5 minutes. Allow it to stand 40 seconds. This enables the sand
to settle. Measure the depth of the settled soil using the metric system, and record as SAND DEPTH.

5. Do not shake the jar again. Let it stand for another 30 minutes. Measure the depth by subtracting the sand depth to determine the SILT DEPTH.  Record and label the data.

6. The remaining unsettled particles are clay. Calculate the CLAY DEPTH by subtracting the silt and sand depth from total depth.

7. Now calculate the percentage of each soil texture using these formulas:

Record data in box. Draw a diagram of soil sample in jar.

Ivar Oudewortel
Posts: 14
4
posted 3 years ago
I know this tread is a bit old but I ‘m hoping someone still reads this sometimes. (As I did).
After a couple of days (and some nights below 0 degrees celsius)
The sample looked like the first pic.
It seems to me that there’s hardly any sand in this soil sample.
I mixed a batch of cob adding 5 buckets of sand to one bucked of this soil/clay.
Seemed pretty good cob to me, although I m not so much expierienxed in cob.
The hold of the mix was pretty good even without strawl.
See 2nd pic.

So my questions are...
1. Did I misread the jartest results or does my sample indeed have very few sand in it.
2. If so, should I add more sand to the mix to prepare cob for building.
3. What effect would a too high percentage of clay in the cob have on my fireplace build out of cob?

Thanks permies in advance, looking dorward to your thoughts.

Kind regards from the Netherlands.

posted 3 years ago
The directions suggest testing after 24 hours and I suspect that timing is important. I would not let the sample get close to freezing just in case that affects the results by slowing down the settling of the sediments. Here is a website I found today that has research on other simple soil tests for earthen wall builders including instructions to do compression tests on soil balls using your foot! These tests  look to be based on scientific research as they are for Nepal earthbag builders building in an earthquake zone and the Nepalese government has created an earthbag building code. Build Simple Stronger Natural Walls - Earthbag and More. Go to the Resources page pdfs Soil Testing for Builders and Soil Testing for Designers.

Mel Hawkins
Posts: 3
posted 3 years ago
Hi, I have done a mason jar soil test, but after two weeks the clay is still not settling. Do I leave longer? So far it looks like 50%sand and 50% silt as I cant judge the amount of clay.   So far based on the ribbon test it is sandy loam. What would you suggest would be this type of soil?

Based on the ribbon test, the soil is sandy loam:
- Able to form a ball
- Not able to form a ribbon
- Soil is gritty 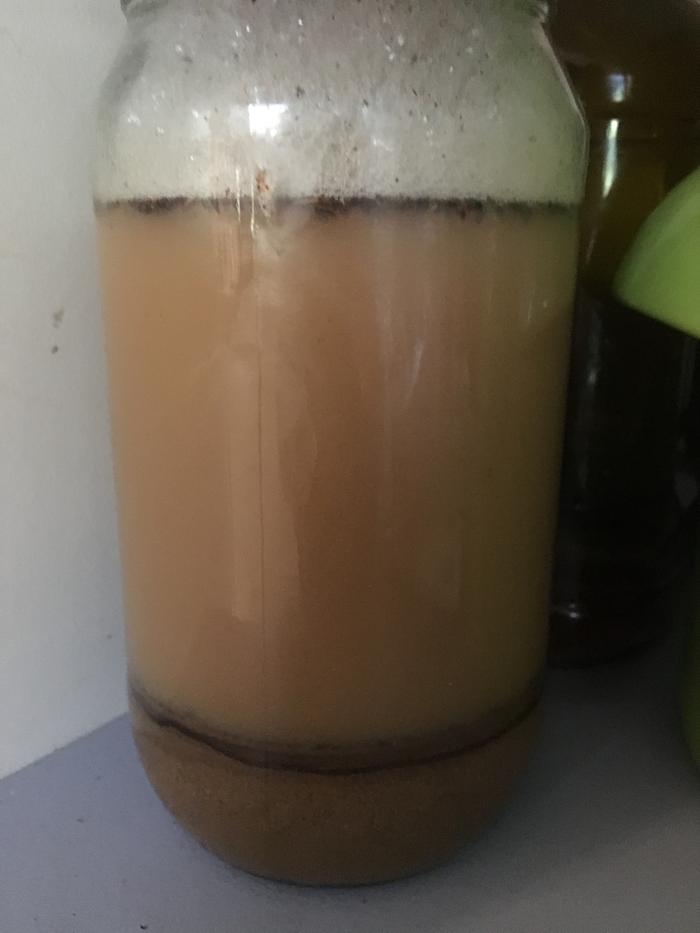