posted 8 years ago
Sorry to have been gone so long. I was dealing with some health problems, and am doing much better now. I've had to take stock a bit and reduce my goals a tad. Several of my projects proved too large to tackle at this point in my life. I gave up on the aquaponics, for which I am not suited by temperament I think (not detail-oriented enough). I still have long-term plans for a small food-forest, but it is on hold right now. I hope to get back on that in the Fall. I'm still totally sold on the method of burying logs in the soil; it has made all the difference in my vegetable garden. Log piles on the surface (hugelkultur) have not worked well - they tend to get disturbed too much by chickens and armadillo and they dry out. I think really huge hugelkultur would probably work. Mine have been too small and I don't have the means to make large ones. Loose brush piles on the surface will help to provide habitat for native critters and foster growth of native tree seedlings, so we'll be doing lots of those.

Judith Browning
Posts: 7992
Location: Ozarks zone 7 alluvial,black,deep clay/loam with few rocks, wonderful creek bottom!
1773
4
posted 8 years ago
It is wonderful that you are back! and so glad to hear your health has improved

posted 8 years ago
Thank you Judith! It's nice to see so many familiar names still here.

Posts: 7926
Location: Currently in Lake Stevens, WA. Home in Spokane
333
posted 8 years ago
Glad to see you back online Tyler.

It certainly is easy to get too many projects going at once. (I think we all want to feel the 'instant gratification' of having a complete system in place.) I feel that if our designs have the long term goal in mind from the beginning, each of the individual components can be started as time/energy allows. Each will help pave the path for the next component.

Think of the fable of the tortoise and the hare. Slow and steady wins the race.
Know your limits, and don't push too hard.

Dale Hodgins
Posts: 9002
Location: Victoria British Columbia-Canada
694
posted 8 years ago
Good to see you back. Revel in your successes and leave the other stuff behind.

The left of the political spectrum needs your input. A few times, I've written a succinct response in the political realm and found myself carefully filling in the blanks in anticipation of a good response from you. It got too easy. --- Now that you're back, I'll have to go back to supporting my positions.

posted 8 years ago
Thank you Ken, John and Dale.

posted 7 years ago
Yes, welcome back. I just saw a post from you in another thread and was pleasantly surprised.

posted 7 years ago
Thank you.

posted 6 years ago
Hi, I'm back again after another lengthy absence. Projects are still very modest, though we're planning some biggish earthworks for the cool season. Can't do much during the "dead of Summer."

posted 6 years ago
Updates aren't any fun without pictures, so here are a few:

My kitchen garden, which is on buried wood (underground "hugelkultur") except for the outside edges and where the apple trees are. It's looking a little thin right now because I missed some critical planting times earlier in the year, but considering this is the "dead of Summer" it's doing ok. 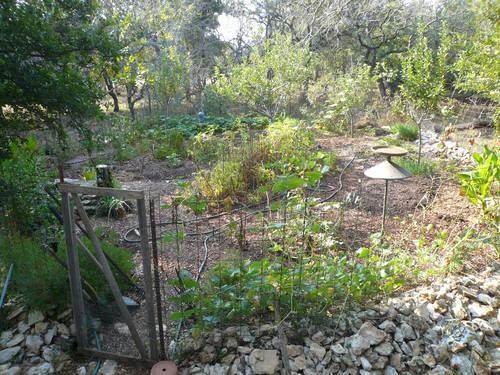 I've moved the aquaponics to right next to the house. I gave up on it a couple years ago because my fish died from neglect.

I figure if they're literally right out the back door I'll keep a better eye on them. I don't have anything but a few Gambusia and a couple noisy frogs right now, but plan to purchase some Hybrid Bluegill when the fish farm starts shipping again in the Fall. 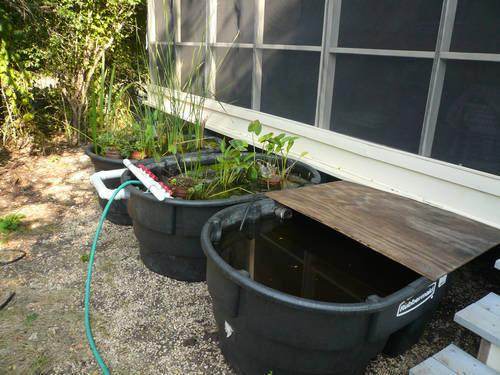 Another project I'll be working on is revamping this greywater bed where the laundry water goes. The canna are getting crowded and there's an unhappy fig in there that might need a different location. 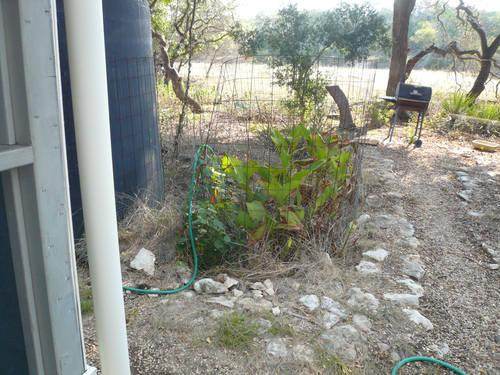 Adjacent to the greywater bed is a hugelkultur experiment which showed me that smallish hugelkultur is a waste of time and energy here, as it dries out too much. There's a tiny fig languishing amongst the dead weeds. It hasn't grown much in a couple years. 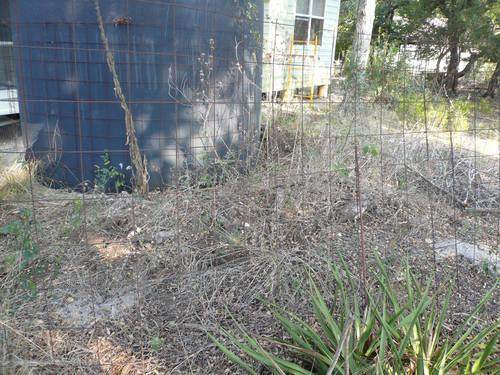 It took me years to realize most of my permaculture projects were far too ambitious and that I'm not suited to ever having a market garden or plant sales business. So my focus is now on the kitchen garden and earth works to capture rainwater for growing primarily native plants, though I do hope to try a food forest experiment with seeds of natives and adapted plants. More on this later, I hope. Also I plan for a small prairie garden in the next year.

Most of my free time is being spent renovating our house, which we finally paid for, so now we own both land and house free and clear except for rental from the gubmint (property tax). We had never finished the house, so now I am gradually repainting and detailing the rooms. Here's the downstairs half bath which is decorated with arts and crafts as a Cabinet of Curiosities: 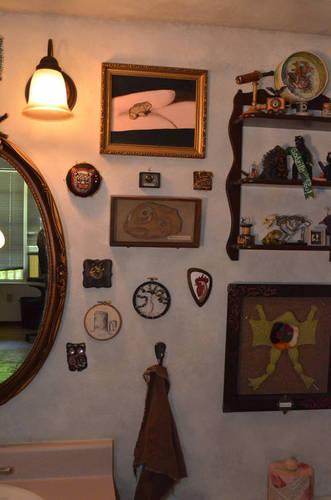 And here is the kitchen in progress (cabinetry used to be builder's oak): 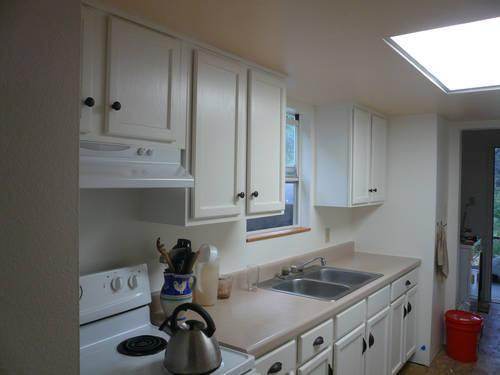 My husband and I are working to transition from our present stressful, wasteful and expensive business of making specialty props and costumes for showbiz to a much less stressful and less resource-heavy business making miniature figures for hobbyists: https://www.facebook.com/Immense.Miniatures

It took me years to realize most of my permaculture projects were far too ambitious and that I'm not suited to ever having a market garden or plant sales business. So my focus is now on the kitchen garden and earth works to capture rainwater for growing primarily native plants, though I do hope to try a food forest experiment with seeds of natives and adapted plants.

well "never say never" as they say ...
maybe in a few years that will come up as a possibility. i find everything always takes soo much longer than you think, its good to start slow and be satisfied with slow progress. but if its in your mind as something you might like to do someday, theres probably a good reason.
maybe seeds might be an interesting direction for selling, especially if you focus on unusual and/or natives...plants that can grow in harsh conditions...

looks good anyway, keep up the good works =)
Dale Hodgins
Posts: 9002
Location: Victoria British Columbia-Canada
694
posted 6 years ago
I like the use of rock mulch. If you ever continue with larger buried hugelkultur, rock mulch all around may help you retain moisture.

Will you license figurines to large toy makers? Could they be made from casein?
(Plastic made from milk, for our young readers)
Tyler Ludens
pollinator
Posts: 11839
Location: Central Texas USA Latitude 30 Zone 8
1158
I like...

posted 6 years ago
Thanks for the encouragement, leila. I'm a rather poor business person, so starting another business of my own is unlikely at this point. I think I need to concentrate on what I can do well, which is making - not selling - stuff.

I wish I had Dale's natural sales abilities!

Licensing the figures is an interesting idea. The biz belongs to my husband, and from what I can tell, he's looking for a small, steady income rather than a sudden larger chunk of money. So I don't know if he's considered trying to deal with a large toy company. Most of his sales are to customers overseas.

I like the idea of looking for a less toxic material to cast the figures in, though any experiments of that kind will be down the road a chunk. But I will definitely mention these ideas to my husband.

posted 6 years ago
Not permaculture, but our cottage industry: http://immenseminiatures.com/ 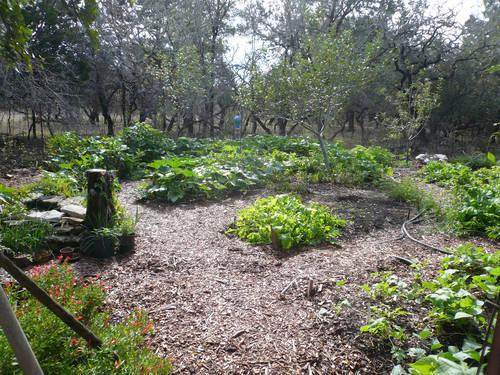 First crop of apples from this tree: 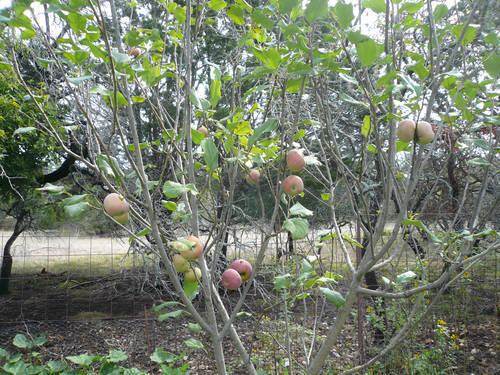 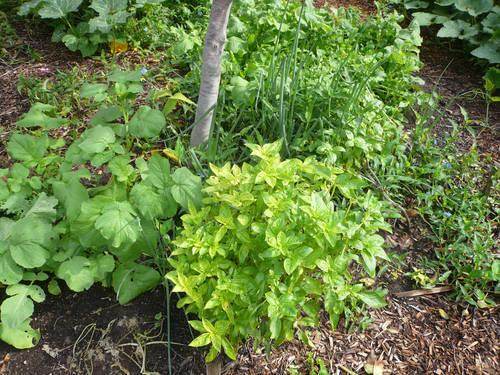 This bean grew very well through the dry period, but has not flowered yet; I think it is Dolichos biflorus 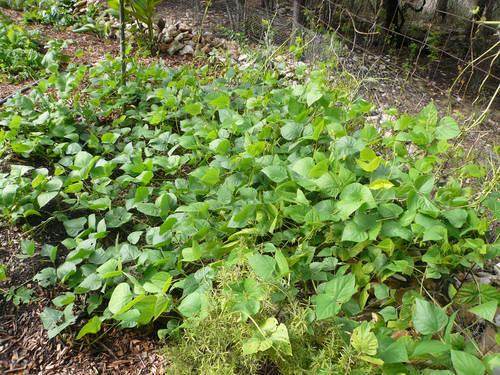 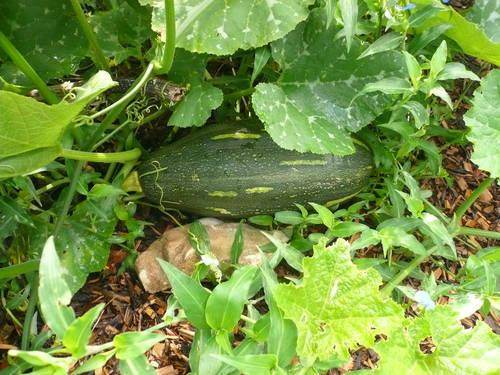 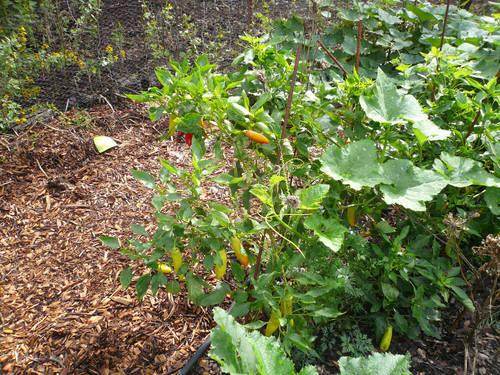 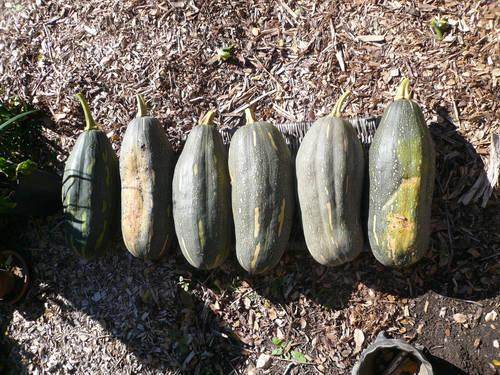 posted 6 years ago
Finished this brush dam in our creek: 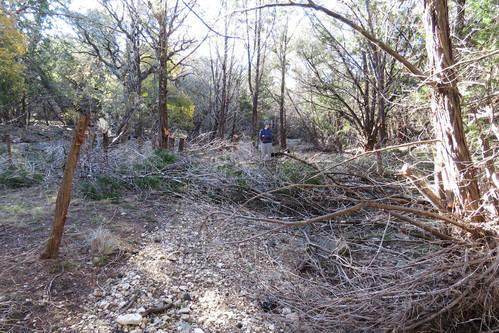 More about the dams: https://permies.com/t/51421/earthworks/Creek-repair-brush-dams