Grass in the orchard -

James Slaughter
Posts: 94
1
posted 8 years ago
Given what we know about the succession of "weeds", how they repair the bare ground and lay the framework for the plants to come by bringing up nutrients, improving soil structure, changing pH, etc., then isn't the best way to manage so called weeds in an orchard just to mulch them with themselves? So, allowing the grass to grow long and strong in the times of year that trees are at their least dormant, and then slashing them and using the material as mulch around the tree. The thing I've noticed about many species of grass, they not only tend to "crowd" out the other plants but eventually crowd out themselves. From what I've heard they create this dense blanket of dead and dry and highly flammable material as their method of suppressing many trees from reestablishing themselves, using the high temperatures to wipe out woody species. I'm thinking that using the material from the plants that grow the strongest, while trying out different species (clover, comfrey, yarrow, etc), and slashing and dropping the material as mulch for the trees to suppress other species in the dripline would be the easiest way (especially psychologically...) of making the best of a "bad" situation. Too often we want to make it clean and tidy, rather than just learn to use what nature provides. I also think too much thought is given to the idea that "competition" from ground covers is the problem that people make out. Chop and drop, deep watering, and suppression with mulch. Another idea would be to in effect create a "ferment" of grass (& other weed) material, feeding bacteria and material into the brew, and then spraying / watering over the mulch in the drip lines. Micro-organisms and bacteria created this way could possibly help to break down the material into food for the tree, as well as being the basis for a general "compost tea". Anyway, just a few ideas.

posted 8 years ago
I am running two different sections under the pecan and oak in my yard, one where I let everything grow out and the other I keep mowed at 4 inches. The biggest difference so far seems to be the amount of bug life present is significantly increased on the section not mowed. I mixed in some wildflower seeds and got some comfrey, parsley, and feverfew established in specific spots. I plan to cut it all back and mow before each tree produces it's nuts.Here are some pictures of the wilder section. 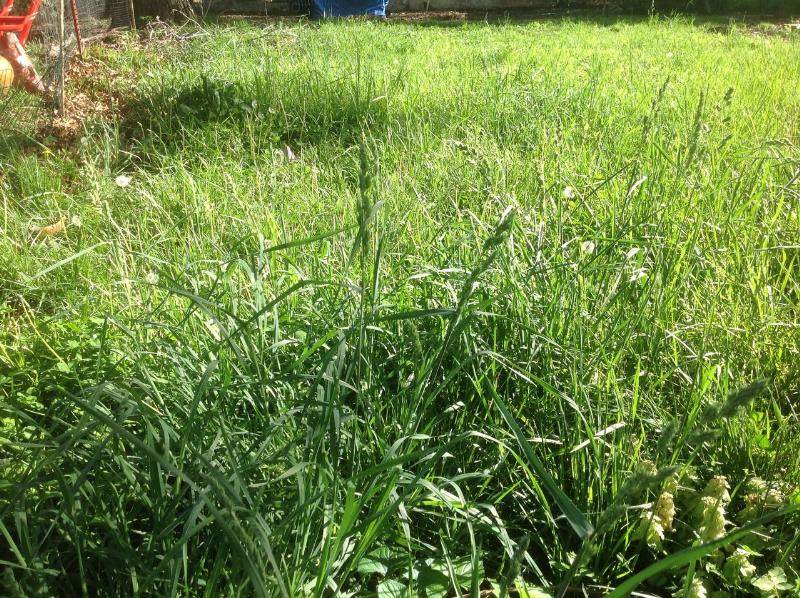 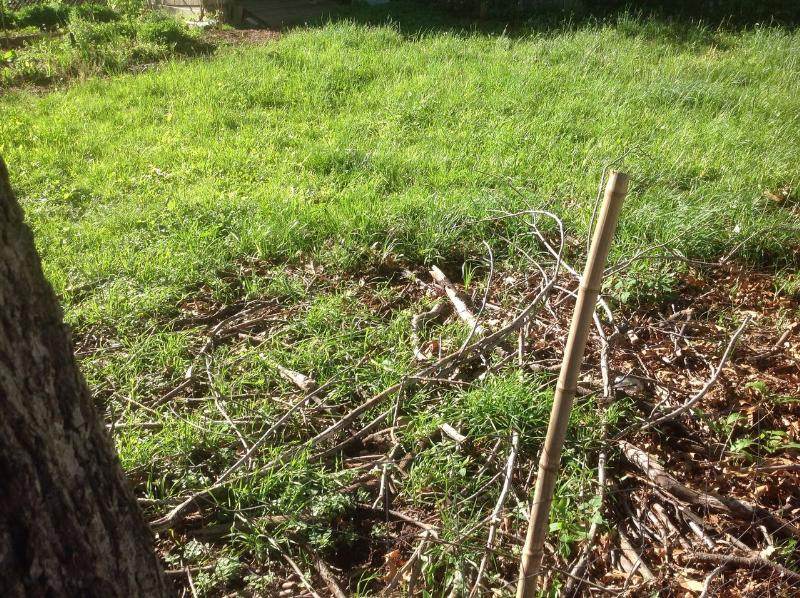 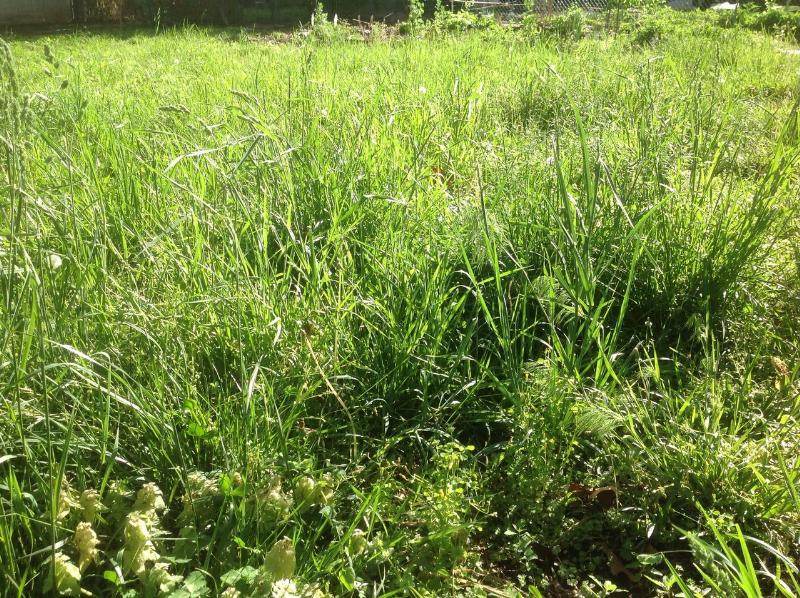 And one that shows a view from the tree down the fence line. 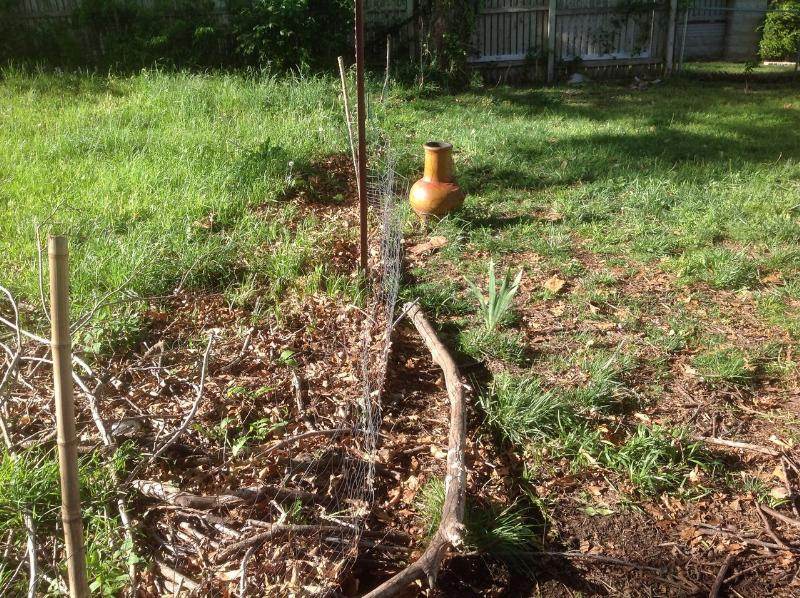 Russell Olson
Posts: 184
Location: Zone 4 MN USA
12
posted 8 years ago
I started my orchard in an old pasture, long overgrown with grasses, but with a mix of other plants yarrow, milkweed, alfalfa, clover, etc.
I found that by mowing the grass really short and leaving "patches" of alfalfa, clover, yarrow etc here and there the grass ended up being overcome. As the summer went on I let the patches grow and kept mowing the grass, by the end of the summer I had a nice layer of non grasses throughout the orchard. I've already noticed this spring how much less grass I have and all sorts of clover popping up, I may not even need to mow this year.
Next is adding comfrey and using my patch concept with some edibles to see if that works.
Ann Torrence
steward

posted 8 years ago
You DO NOT want to pile up dry grasses around the tree trunks, lest you invite voles to move in and girdle your trees. By all means chop and drop, but keep it clear around the trunks. We chop and drop about once a month, because any taller than that and it's a big fight with our 2 wheel tractor and sickle bar mower.

posted 8 years ago
I started chopping and dropping the grass / weeds around my fruit trees last year. It really seems to be knocking back the weeds under the drip line of the trees. I also added comfrey, peas, fava beans, and vetch (which also out competes the grasses). My trees are only 2 -4 years old so the drip line is not large yet. I haven't had issues with voles yet, but I still have the trunk guards around most trees. I will have to remove many of the guards this year. I plan on adding pea stones around the base of each trees (as per what Michael Phillips recommends). For me, I need to decide on how far I will keep a dense ring of mulch away from the base of the tree. We are really hot and dry here for 6 months and water conservation practices are key. Just need to find the sweet spot.

The only negative I have experienced with this method is an explosion of earwigs living in the mulch. Earlier this spring I would go out at night and see a hundred or so earwigs per tree eating the new leaves. The trees are growing fast and the earwig pressure has eased a bit. I don't think the earwigs will present any long term deficit. I expect that overtime the earwig issue will balance out. We have plenty of frogs and lizards to help.

James Slaughter
Posts: 94
1
posted 8 years ago
You really do notice the way local insect communities seem to respond as you change their environment. I had shocking problems with earwigs the first year that I put in vegetable gardens, and did plenty of squashing at night to little effect. The next year I saw very few, I assume as they found a new balance. I think it's also like the people that keep neat as a pin gardens and complain about snails eating everything on sight. I've noticed that snails (at least in my garden) tend to prefer the dead plant material. Sure they occasionally nibble a seedling but generally I don't concern myself too much with them. It seems to me that often times the more we try to "take control" the more problems seem to build one on another. Minimal intervention at the right times seems to be key. As to voles, we don't have that problem in Australia. i would not allow plant material to build up around the trunk of the tree regardless, either as living material or as dead. Fungal problems can often be a result, collar rot being a particular example. Yeah, I just feel that building that material around the drip line seems to be the best "defense", and over time if you practice it the right way you tend to encourage species that grow at the times of year that you want them to as their material tends to suppress the plants that you are less likely to desire to compete at certain times (namely fruit set). I think that worrying about weeds in an orchard and building a barrier of plants or physical objects is a waste of effort. Save this for the veggie garden proper. Cheers.
Isabelle Gendron
Posts: 173
Location: Montmagny, Québec, Canada (zone 4b)
1
posted 7 years ago
What a nice tread for me. I was coming talking about my new decision and here I see this.

Just a little recap: 4 millions square foot, half of it in a mature forest and half of it in old pastures. A lot of ¨wild¨ apple trees, and a lot of berries trees (sour cherries, Saskatoon berries, hawtorn) Pimbina etc...and buches like blue berries since my ground is more acid. rasberries, strawberries etc...

I plant my garden with the Emilia Hazelip technique and starting a food forest. I think I begin to understand how to integrate the concept to my exciting forest

For now, we started last year buy planting apple trees, pears ans see buckthorn and vines but more in the traditional way (in line),,,Now I have to developp with this. SO last automn, I planted bulbs around the apple trees and put some cardboard and mulch with straw on it on a good surface. This year, I transplanted a black currant and a pimbina that I started last year by a branche cutting. I also added yarrow, rhubarb, some flowesr, hemerocalles, tansie and sowed some seeds that I had, clover, vetch, beans, salad etc around.

My point in regard of the topic is that this spring, even with the bulbs, the cardboard and the straw, a lot of grass grew around the tronc since there was holes around them. I could'nt put the cardboard close enough. So when I saw this I had notice that clover, dandalions and comfrey, looks to take over the grass. I cut the grass did some scratch on the grass across the grass and sewed some clover and vetch seeds. I will let this go. ON one of my pear tree, by a coincidence, probably from the dirt that we took to put it in the ground, clover grew around the trunck just at the base. It is so nice.

Aother point I was woundering, Since I am starting with an exsisting forest, it is almost impossible to think that I would be able to mulch, and put compost all over the place...I think I will try to add fruit trees, sow some seeds around and plant all layers of plant and let go. One day, the food forest will grow and will take over...This is my guess....SInce their is grass all over the place, it will be easier and less discouraging. I notice also taht on the edge of the forest, their is not a lot of grass. The ground layer is more short and a lot of strawberries are present and bluberries. Also a lot of natural compost and shrubs. I think I will take the challenge...what do you think?