Machines or not? Tending with brushcutter or fire?

posted 7 years ago
After reading the wildfire topic, I decided I still wanted to title a new threat.
What are the pro and con for cleaning a land with machines or fire?

What were and are you ideas about using volontary fires for tending a land?
What would be the differences according to the type of land, surface, use...?

I did hate the fire idea though I knew about its former use and its utility.
Here is what I did thought and what I think now.

- Fire was inevitable when there were no machines for large cuttings.
- Animals are more efficient for tending as they leave manure.
- Some deforestation and soil spoiling is supposed to come from the habit to cut trees, burn them and enrich the soil with ashes.
- Ashes will be efficient a few years, but the carbon had gone into the air instead of into the soil!!!
- So, any technique to put carbon into the soil with no burning looked so much better to me!

Now, a fire has passed through some of my land.
I must say that I have LEARNT something IMPORTANT!
The left-overs after a fire are NOT ASH-GREY!
They are BLACK!

A quick fire running away with the wind has no time to burn herbs to ashes,
so this means that such a fire is making ...CHAR!
This is very different from building a fire after cutting.

If ashes were left, then it would not be as positive.
I am now much more in favor of controled fires.
I used to think it was useful for regeneration, but with some disadvantages.

What did I do after the fire?
I asked someone to clean the rest of my place with a brushcutter, just in case....
... a few hours of motor noise....
Of course, the dry herbs are now greatly shading the soil, it looks "clean", I can walk better, less risk of falling etc.
But, the happiest beings of the valley are now the pigeons!
Dozens of pigeons are happily EATING the seeds that they have access to...

Indigenes people were I think burning just before the rain would come.
the seeds are better protected from being eaten when the whole plant is still there.
Any motor is burning ...petrol
The job by hand is very long.
A fire would leave char more than ashes.

So, my actual conclusion is that, though some smoke = nutrients are sent into the air, this is not as bad as I thought,
IF the fire is well done.

- I think that the wind is very important and that the herbs must burn very QUICK and be left with no time to turn into ashes.
- In frost-free places, fire controls plagues.
- biochar is left (without barrrels and without machine-chopped wood brought to you with fueled trucks...)
- no petrol input in tending
- old wood can leave place to new sprouting, regenerating some plants.
- Perenial greens will have room and air instead of an old dry mass of leaves.

Last year I also made a fire to burn a place with too many weed seeds. I was unhappy to do it, as I was against fire, but the job was too difficult to do (because of the former owner non-tending of the place during 20 years).

Now I can see that my negative idea of fires was due to BUILD-UP fires I had seen before.
The big difference is that they leave a lot of ashes and very little good stuff for the soil.
I was just stopping the fire as much as I could, so that some char was left.

A moving fire on the land is very different, and I wonder if you had thought about the difference too?

Alder Burns
pollinator
Posts: 1614
Location: northern California
233
posted 7 years ago
Seems to me what you have done is to have "happen" to you, with good observations following, the role of fire in the Mediterranean and perhaps other climates. Native people in my part of the world would set fires at the onset of the rainy season, often after the first rains, so as to ensure a "cool" burn which leaves a lot of black charcoal. And they would burn frequently, often every few years, so as to prevent the buildup of underbrush and dead wood, as well as kill off overcrowded tree saplings in ecosystems that would tend towards closed forest in the absence of fire. The danger for such ecosystems is that when fire is consistently prevented for a long period of time, all this organic matter and living saplings and bush grows up. The climate is so dry for much of the year that fungal decomposition typical of moister climates is very slow. Then, when fire inevitably does occur, it becomes a sterilizing inferno fed by all the accumulate stuff. This is the situation in much of western North America now, and doubtless elsewhere in similar climates. Allan Savory's works tell us that in these climates, organic matter primarily breaks down in two ways, in the guts of a ruminant animal, or in a fire. "Composting" as such, will be much slower, and nonexistent without rain or irrigation.
Alder Burns
pollinator
Posts: 1614
Location: northern California
233
posted 7 years ago
Clearing with machinery has one advantage (and perhaps only one)....speed. The kind of machine that will be most appropriate may take some looking around, and the price will be high, especially if there is no timber of value that the company can take away. Depending on the machine, it may leave behind it the cut slash, or it may grind it up into chips and either accumulate these into a trailer or spew them out behind itself. If you are in an area with strong regulations on burning, you might still get to desirable biochar by gathering the chips and slow-burning them in barrels or some such in the wet season. Beware the machinery on the land once it starts raining.....you will have ruts and compaction. And...most importantly (I learned this lesson the hard way more than once!) if you invite someone with heavy equipment of any kind onto your site, WATCH them like a hawk the entire time they are there. Be very clear where they are to go and not go.....marking this clearly, and supervise them the whole time, having a clear way to signal them to stop and consult. It only takes a matter of seconds for someone on a big machine to make a big mess by going somewhere they shouldn't....
Xisca Nicolas
pollinator
Posts: 1981
Location: La Palma (Canary island) Zone 11
I like...

posted 7 years ago
Yes Alder, I agree, I have read the fantastic book "tending the wild", about California natives, and I agree with Allan Savory as well.
I have planned to have at least 2 animals like goats...

oops, right, I forgot animals, they are on the same side as fire!

The machines I put for cutting are just hand brush cutters and chain saw.
Yes my choice is about speed...
I just want to not repeat this every year.

The drawbacks of fire, I think:
- When there was no fire for a long time, the fire would be too big instead of fast.
-> sterilizing
-> more ashes, less char...
- Small size of a place and/or when you do not want to clean a whole place but parts.
- Plastic waterpipes!

After speed, a 2nd advantage of machines is about choice.
You cut only and precisely what you want.
Well, workers did some unfortunate pruning of my Natal plums and some water pipes,
but animals and fire would have been worse.

posted 3 years ago
I had a bush fire at my place 25 years ago. I rushed in and installed sprinklers over a couple of acres and watered once a month for a few months. I could not cover the whole burnt area. 25 years later it is easy to see where I watered and where I did not.
The difference is alarming. The non watered area is still struggling.

posted 3 years ago
Why one way or the other? Why not use both methods depending on what you are doing?

On my farm, and in my area, we have big trees and a healthy forest products industry, so any tree can go to market. This helps knock down land clearing costs to around $201 per acre with heavy equipment.

The use of fire comes in by saving how far I must travel. It takes a lot of time to take a bulldozer and push every stump from the center of the field to the outside of it. BUT if I can take those stumps and push them only 250 feet or so, then burn the piles, I not only save time, I save a lot in diesel fuel too.

For people with small equipment, fire can really make or break a farm. I had a huge pile of logging slash left over from a logging operation this winter, and needed to clean my field of logging slash so I could get a crop off it. My little Kubota could not push that massive pile of debris, but it sure could after I burned 99% of it. So in that case, fire really made the difference.

For me the ash acts as lime so I can get save on lime costs for a few years sweetening my soil, but that is more of a benefit then something I purposely do.

HUGE NOTE: I live in Maine where we get snow, so I can legally and safely burn in the winter with snow on the ground to rid areas of logging slash for land clearing operations. 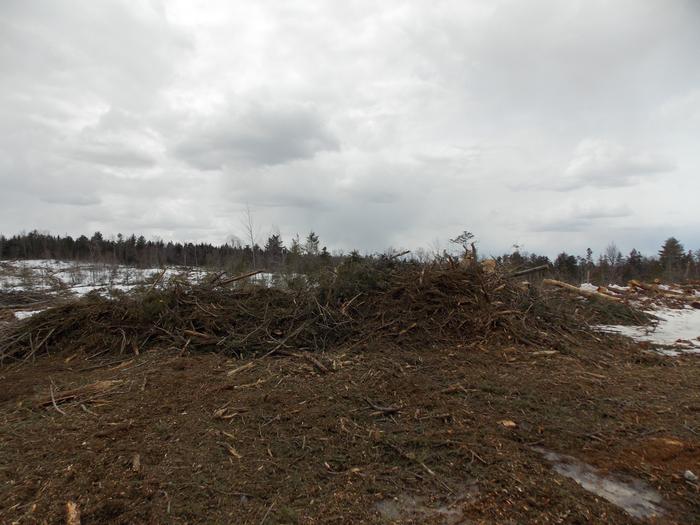