Julie Bernhardt
Posts: 83
Location: Indianapolis, Indiana
4
posted 6 years ago
I cut these branches from 2 different bushes growing south facing between a housing addition and the street. There were several of each of the bushes along the road and the area is always full of birds. I found 4 small white seeds in the bright red berries and 3 small white seeds in the darker red berries. The quarter is for scale and the seeds are next to it. The bushes were about 5 feet high Occasionally the city cuts them back off the road but otherwise they are not cared for.

I am in central Indiana.
unknown-bush.jpg 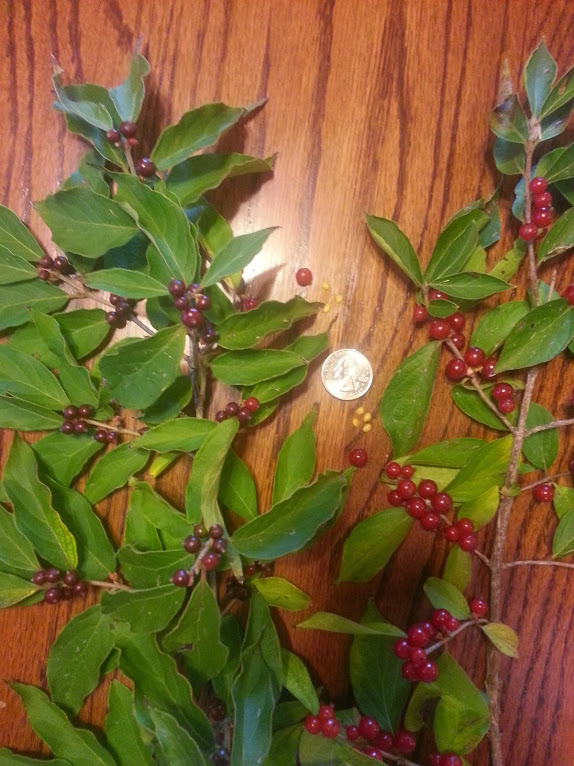 Aaron Festa
Posts: 152
Location: Connecticut
1
posted 6 years ago
Kinda looks like autumn olive. Plus they fruit this time of year, are usually found along the edge of roads and have seeds. But lets see what others think
D. Logan
gardener

posted 6 years ago
*Hisses like a vampire confronted by sunlight*

Bush Honeysuckle. Kill it. Kill it all! The stuff is also called Siberian honeysuckle. It is one of the few plants listed as invasive that I think really is. Give it time to get a foothold and it will kill off every other plant around it. Originally it came to your area through Oxford Ohio Audubon Society because of the beautiful sweet flowers and bright berries that birds love dearly. In that part of the world, it out competes every other plant. It will put on leaves first and drop them later than anything else. Nothing eats it other than birds spreading the seeds.

Branches can grow several feet in a year, spreading quickly out from the base. At full size, it becomes a 15 food bush that blocks out almost all sunlight and leaves dead earth below it. If they take over a plot of forest, no new saplings will ever grow there until it has been killed. Especially fun is that it refuses to go out without a fight. Cutting it back will require several years of constant attention if you allow it to get established. Most of the time people had to use herbicides on the cut stumps and even then it would come back sometimes. I have managed to kill it by digging out the majority of large roots and then cutting away the tops when they poke up.

As a child I loved it. Sweet scented flowers with a sugary drop if you pulled the base. Pretty berries that squished when ripe and that drew birds in droves. Long sticks hollow in the middle more often than not and which grew so quickly and well that a destructive young boy couldn't keep it from growing. As I hit late teens, I realized that it was killing off every bit of woods in my area. Choking out all other things so that where it was present, no wild gingers, mayflowers, grasses or anything else could survive. No new trees had grown in one section of 'forest' in almost thirty years.

Some might not agree with me, but I would just as soon it never existed outside of Siberia. If you value other plants, you won't let that thing get into your own land. Of course, since you found this on a neighbor's plot, I suppose you can't root it out. Instead try for maybe honeysuckle wine or something.

Julie Bernhardt
Posts: 83
Location: Indianapolis, Indiana
4
posted 6 years ago
Well pooh!
Yes the honeysuckle does cover huge areas of road's edges here. I recognize it in bloom. I have been fighting a type of honeysuckle bush that seeded here from my neighbors yard for years now but it has broader leaves. I was hoping this was a viburnum or something I could use.

There was also a white berry bush with a single green seed in the center growing there too. It has broader leaves with pink stems near the berries and I am hoping it is a dogwood.