posted 3 years ago
Today I moved the composted leaves, chicken poop and coffee grounds out of the chicken greenhouse and over to the garden to finish cooking for a month.  The big pile of leaves turned into about 4 cubic yards of compost.  Yay! 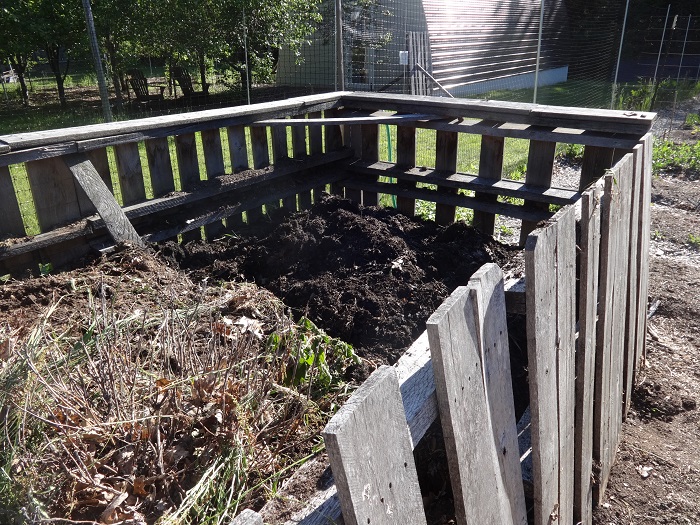 Cécile Stelzer Johnson
pollinator
Posts: 913
Location: zone 4b, sandy, Continental D
275
posted 3 years ago
I'm still working on building my chicken winter run. So far, the base of concrete blocks is built, the North wall is up, I scored free doors and windows that I have to refurbish and making good progress on that. Today, I'm hopeful to install the hoops. I have a height problem and I may have to do a double wall on the East because the hoops will not clear the edge of the coop's roof. I had to bust the base to drop the door to ground level
Looks like I have 2 hens brooding but they are confused as to which box they were brooding in: The brood in one for 4-5 days, then switch to another... and another. I can't keep them straight. If the run was built, I might arrange a spot just for them, within view of the others but separated so I'm rushing. That pile of good compost is impressive, Mike!

posted 3 years ago
Great set up mike, next winter I will definitely have a compost coop set up. It just makes too much sense not to.
Mike Haasl
steward

posted 3 years ago
Thanks Rob!  Now I need to figure out a way to use the compost heat to provide a bit of warmth to the coop...

Mike Haasl wrote:Thanks Rob!  Now I need to figure out a way to use the compost heat to provide a bit of warmth to the coop...

This year, we had here an early frost, cold weather and then wet weather that ruined my plans to pack the winter chicken greenhouse run with leaves. I will have to rely on a transparent film and sunshine to give them some heat. I also have a couple bales of straw that got wet. On the north wall, I am considering stretching a black tarp that would act as a heat sink. It would also be a film to prevent the wood from rotting if I were to place enough compost against it.
I have to clean the coop today. That would also help but I'm not too keen on tossing food over their own litter.

posted 1 year ago
What did you do to fasten the greenhouse portion to the coop in a secure manner? Is the cattle panel structure just fastened to the ground and supports, or is it in any way tied directly to the coop?
Mike Haasl
steward

posted 1 year ago
The pallets are screwed to the coop.  The row of pallets is tied together along the top with a long 2x4.   The cattle panels are then resting on the pallets and against the 2x4 and screwed down so they stay put.

There are two pseudo-beams on the top that support the cattle panels and force them into the shape I want.  Those two beams are screwed to the coop.  At the lower front edge, the panels just sit on the ground and have some spikes to keep it in place.  I don't think the panel is attached to the coop directly but it surely could be if desired.

Dietrick Klooster wrote:What did you do to fasten the greenhouse portion to the coop in a secure manner? Is the cattle panel structure just fastened to the ground and supports, or is it in any way tied directly to the coop?


It is connected to the coop and that was not my best carpentry work: the trap door connects the 2 buildings: In the long months of winter, they can't go out because of all the snow in the yard. At night, they go back to the coop and roost. The trap door always stays open at night since the 2 buildings are predator proof and mouse-proof [pretty much mouse proof]. In the day, they can drink [heated container in the coop] and forage a bit on the kitchen scraps and germinated grains I bring to them in the greenhouse. It saves me the chore of locking them up at night and releasing them during the day. [I'm working on having a well dug in the greenhouse itself. That would save me having to carry water from the house with a sled and pails! -I'll have to see if that is legal though.
The  connection was built from a hive super that I cut in half and shoved in the side wall of the coop and one of the vertical walls of the greenhouse. The cattle panels go North South and are planted through the top of the wall which is a 6" board on top of a standard wall of 2X4s or stapled with fence riding nails.
I'm not very satisfied with the roof of the coop touching the edge of the greenhouse portion but it works. The edge of the cattle panel against the coop is quite stiff and is fastened solidly to the vertical East and West end walls of the greenhouse, where I have the 2 people doors.
so technically, the greenhouse could stand on its own. The long axis of the coop is at right angle with the long axis of the greenhouse. If it was to be done over, I would have one people door connecting the coop to the greenhouse instead of 2 doors at right angle.
That would have been easier to build and I would have the coop and the greenhouse connecting face to face, although I'm not sure it would be as weather tight as it is.
The plastic sheet that I used to cover the greenhouse has to be rolled up so the chickens can be comfortable when it gets hot. I'm due to let it down for the winter.
I got rid of this batch of chickens so I could do some remodeling inside [and maybe add a hand pump to get them some water in the greenhouse].
I could take some pictures and email them to you from my phone but I have not been able to share pictures on permies. [I'm all thumbs when it comes to doing stuff like that.] maybe you can send me a mooseage?