posted 6 months ago
I was thinking as far as kids go, you could try making it a game.  Ok we are going to town today, we are special agents and don't want anyone to know who we are so we have to wear a mask, or we are cowboys and expecting a  duststorm and have to wear a bandana to save our lives.  You get the point. If they are anything like my kids these trips will need to be quick.
Depending on how old your kiddos are, you might just explain the situation to them.  Most of us try to protect our children, shelter them, Lord knows they will have enough to deal with as adults. Often times kids know more than we think. Knowledge is power, and often leads to understanding. Good luck to you and your family.  I feel for those of you who have little ones through all this.

I'm in a similar situation. Haven't needed to go anywhere and don't need a mask in our neighborhood as nobody else lives nearby. Masks annoy me because my glasses fog up.

When I do have to go somewhere that I have to be close to other people, I wear a mask. At this point, for us, it's just good manners.

Living in Japan, we had accumulated a stack of masks anyway. They are often given out with advertisements on the package or as a bonus taped to the side of a sixpack when the weather gets cold. So we had masks already, but most places here that require masks provide them.

For people needing a new mask each day of course, masks soon ran out. Enter the ten second, no sew solution: Handkerchief masks:


Kids can choose their own fabric and fold it themselves. They might be more likely to keep them on, especially if other church members praise their mask making skills.

I have two perspectives on mask wearing. The first is etiquette, that it has become polite in some settings. Your experience in Japan is a good example. For private gatherings, like church, if the new rule is to wear a mask, it's polite to oblige.

Every church is different, but I have attended many with strict dress codes. Women wearing hats and men wearing ties. Newcomers are generally forgiven the first couple of times, then offered "sunday best" clothes if they aren't able to get them themselves.

Personally I don't mind following the dress code of private groups, like church, or work place uniforms, or wearing (or not wearing as is common in Japan) shoes inside. If, however, I am not comfortable and still want to join, I talk to whoever is in charge about making an exception for me. For example, most of the indoor slippers here are way too small for my feet, so when offered slippers, I simply say my feet are too big, is that ok? and enter in just my socks or bare feet.

I wonder if you could talk to your pastor, or church leaders, about your situation.  They might be willing to compromise for an asthmatic and small children, and explain your situation to the congregation. Maybe you could sit in the back by an open window or up in the balcony, if your church has one, and agree not to sing, as singing launches more droplets and much further, as Michael Cox mentioned.

My second perspective is that of public health and safety. It's well accepted here that masks help you keep your droplets to yourself. There were some mixed messages in the beginning of this pandemic combined with a mask shortage. But now that things have calmed down, here anyway, it's expected that everyone wear a mask when around other people to avoid spreading covid in the event you are unknowingly infected and not showing symptoms.

From Japan's public television NHK(in English): A short clip showing the spread and lingering of micro-droplets after a sneeze and in normal conversation in an unventilated room.

Full report in English: shows droplets during conversation at 2:30 and also a simulation of droplet spread and lingering in the air up to 20 minutes in an unventilated room at 3:55


I think it's similar to attitudes toward tobacco and secondhand smoke. At first, experts recommended tobacco as a healthy product and encouraged smoking. Then, after some confusion, tobacco became widely accepted as unhealthy.

People still smoked indoors and around other people believing the smoke only affected the smoker. Then, after some confusion, secondhand smoke was widely accepted to be unhealthy for the people around the smoker. And now most public places and indoor common areas are nonsmoking.

Imagine if someone in your church lit up a cigarette inside in the middle of service. How would the congregation react? We expect an environment free from secondhand smoke. We are still in the confusing transition of mask wearing, but I think soon we will also expect an environment free from secondhand droplets. I wonder if even after this virus runs its course, masks will continue to be expected in high risk areas like airports and train stations.

Clip showing droplet spread with and without a mask at 0:36 from NHK (in Japanese)

Hope you find a solution that works for your family and your church!

posted 5 months ago
Thank you for those videos, Amy Arnett. In Canada, I had to copy the URL's and watch them directly from my browser, but it is worth doing so! I had heard that there were recommendations of opening windows regularly, and these videos support that with photos.

posted 5 months ago
Thanks all. We haven't decided if we will be going to church yet or not. If we do we'll wear masks. Part of me is now wondering if we should attend with an infant or just wait until things settle down. No decision as of yet. 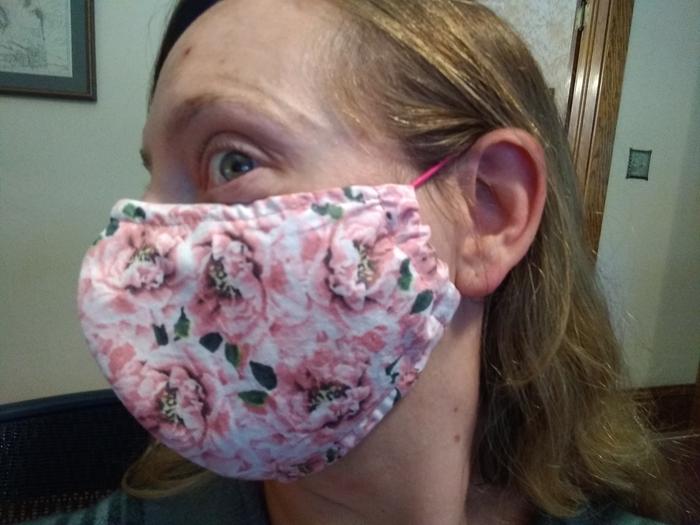 posted 5 months ago
Wow Elle, I love the roses! One could even say it's got a "sort of" permaculture theme. Of course, while you were making your decision, this thread has taken on a life of its own, which is a good thing.

There are countries in the world where wearing a mask when out in public when there's a lot of sickness around, let alone a pandemic, is considered normal, responsible, kind behavior. The people of North America need to come together as a group and decide if they value that attitude, regardless of "we don't do that around here" history. There are *many* things that were considered normal behavior hundreds of years ago that humans have decided needed to change and have done so, and many more things we'd like them to change, like polluting rivers and abusing farmland. I think there are way better ways to accomplish those goals than shaming people.

Collection of 14 Permaculture/Homesteading Cheat-Sheets, Worksheets, and Guides
will be released to subscribers in: soon!
click here for details