The joys of a wood cook stove!

Everything is delayed, out of stock, on a schedule I can’t relate to.

Oh for the good old days when the new normal was the old normal.

posted 2 years ago
Well, after almost 3 months, our stove arrived. The installer came a couple of days later, and we now have our stove. We need to do a few small fires before we let it roar. Once we have it broken in, we'll try our hand at doing some cooking in the oven.

014.jpg
016.jpg
Janet Reed
pollinator
Posts: 343
Location: Dry mountains Eastern WA
78
posted 2 years ago
[quote=Jim Guinn]Well, after almost 3 months, our stove arrived. The installer came a couple of days later, and we now have our stove. We need to do a few small fires before we let it roar. Once we have it broken in, we'll try our hand at doing some cooking in the oven.

posted 2 years ago
[quote=Janet Reed][quote=Jim Guinn]Well, after almost 3 months, our stove arrived. The installer came a couple of days later, and we now have our stove. We need to do a few small fires before we let it roar. Once we have it broken in, we'll try our hand at doing some cooking in the oven.

Jim how wonderful!  It’s a beauty! Tell us more about it![/quote]

It is called the Vermont Bun Baker XL sold by Vermont Marble, Granite, Slate & Soapstone Co. (http://www.vermontwoodstove.com/sample-page/soapstone-wood-stoves/#!/Vermont-Bun-Baker-XL/p/54023116/category=8289041). The design comes from Australia and the stove is made in New Zealand by a company called Nectre (https://www.nectre.com/en-au.) Over there, they call it the Nectre Big Baker's Oven. I guess over here they figured "Vermont Bun Baker" would sell better! LOL.

Cost of stove: $4315. Labor and materials to have radiator removed under window, floor boards cut away, and tile installed even with floor boards: $2075. Labor and materials to have stove and chimney installed: $3891. Total Cost: $10, 281. A lot of money, but we think it was worth it in the long run as it will also heat the entire house and is a safeguard against the SHTF....besides all the goodies it will cook for us!

posted 2 years ago
Love a good old fashioned aga. I've got a video of Dick Strawbridge (you'll know that name if you've watched the earlier seasons of scrapheap challenge) cooking with a rayburn here, I find it comes in handy as some features can be obscure.

Also here's one of the factory that hand makes them.

"A Wizard is never late, he arrives exactly when he means to"-Gandalf-Fellowship of the ring-J.R.R Tolkien.

posted 1 year ago
I have been wanting a wood cook stove for years, and as it turns out there are two for sale at the moment on my little island. Both are from the early 20th century and have been out of use for a while but the sellers say they are still functional. Although only a decade or so apart in time, they are worlds apart in appearance. I'm wondering if that difference in form also translates into a difference in functionality, and if anyone would be able to comment on that?

One is a McClary's Kootenay which from looking for similar stoves online appears to be from the 1920s, maybe 1922. It's from a Canadian ironworks that was well known for its stoves. The seller is asking just under $800. In the photo it looks like it once had a water reservoir that has been removed; I'm hoping to make contact with the seller today to look at the stove and will ask if they have the reservoir, possibly it was too big for the space and is in storage. Even if it was leaky and needed repair it would be nice to have.

The other has the name Berkeley on the front but I haven't been able to find any information about a manufacturer or model of that name online. According to the (different) seller, it is from the 1930s. They're asking $250. It's available to be seen today. (Is that the scariest hot water tank you've ever seen, or what?)

Aesthetically I greatly prefer the McClary's, and know a (very) little bit about cook stoves that look like it, but have absolutely zero knowledge of the slightly newer ones that look like this Berkeley. If the Berkeley might actually be a decent performing stove, the price is low enough that it could be a useful stove for a detached summer kitchen. On the other hand, since I really am a novice with wood cook stoves, despite years of experience with wood heating stoves, would it be smart to avoid the antique ones and buy one of the new stoves (something like woodandheat.com or Baker's Choice, etc. - my budget won't run to the really expensive ones). My gut feeling is that an older cast iron stove in good condition is probably better quality than the cheaper new ones - that is probably based on my feelings about cast iron frying pans and I don't know if it is also true for stoves!

Any thoughts from those with more experience? 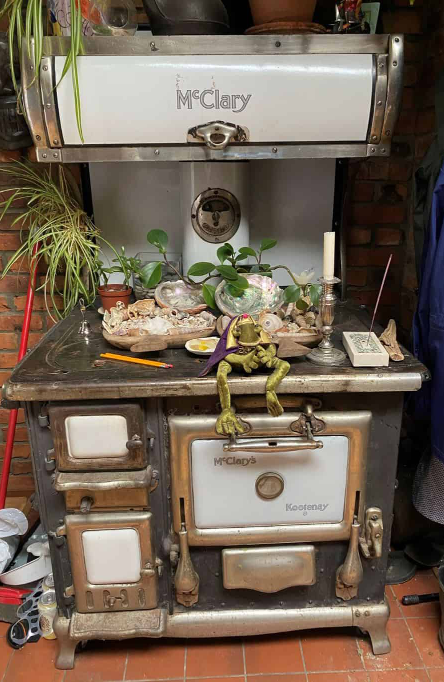 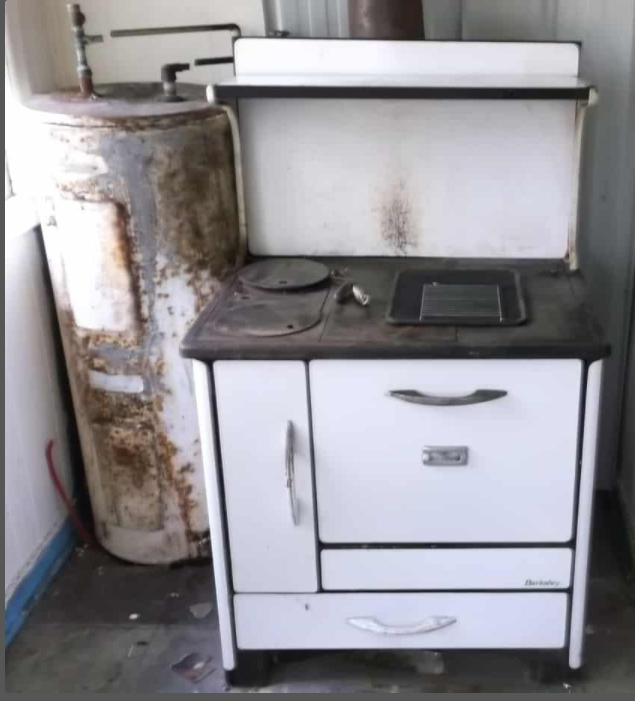 Janet Reed
pollinator
Posts: 343
Location: Dry mountains Eastern WA
78
posted 1 year ago
Here are some thoughts....I hope you get this before you go look.

I looked at a LOT of older wood cookstoves and have owned 3.  I now have a new wood cook stove. And an old one in the garage.

When you purchase an older stove you have to look hard at ovens, grates, fire boxes.  Because replacing or trying to fix them can cost a bundle.  If you’re just replacing fire brick that’s one thing.  But actual grating, fire boxes etc take quite a beating over the years. If they are rotted out or rusted out I would plan on spending time and much money to have them upgraded. And time.  I have a lovely blue porcelain cookstove in my garage that is almost a year out to be fixed by a competent restorer.  And it will cost more than a new stove to do it.

I think you have a misconception about new wood cookstoves.  Most I have seen are well made.  My new one is lovely, well made and performs better than some old stoves. It didn’t cost a fortune and it cooks like a dream

Just look hard at what you are thinking of buying.  On this thread you will see old and new.  Think about what you plan to do with the stove.  If you plan to use it daily or just in a summer house.

$800 bucks is a lot of money if it doesn’t work well. Or it could be a great bargain.

posted 1 year ago
Thanks Janet, that is exactly the sort of thing I needed to know! Haven't gone to look yet.

The good thing is I have plenty of lead time to look around and find the right stove as this is for a house that isn't built yet and may not be started for another year.

I looked at your Kitchen Queen photo in this thread and she does look like a lovely stove. Glad to hear that I won't need to win a lottery to get a good new stove if in the end I decide to go that route.

Janet Reed
pollinator
Posts: 343
Location: Dry mountains Eastern WA
78
posted 1 year ago
Good on you!  Look around and learn.  You might be surprised at what you find.  We inherited several stoves including the one in the garage.  And I bought an old trash burner once.  It resides in the barn.  You learn a lot about them from looking snd poking around in them.

The new ones can, depending on the brand/maker be more efficient than the old.  Mine is much more efficient.  It uses convection to heat the oven.  It’s something to think about; as well as the other well made stoves old and new you see on this thread.

Denise Cares wrote:Very cool stoves everyone!  I love the look of a real country kitchen.  Question is how do you manage cooking/baking through the summer months and still keep relatively cool?  Weather out here gets over 100 deg often in summer, so it would be a challenge to "fire up the stove"!!

Some people have summer kitchens...places they cook in away from the main house. My Aunts all had wood stoves in summer kitchens so the house stayed cool.  Some of us cook early and plan our time to cook when it’s cool .
Others might use alternative cooking methods in the summer.


YES I'm wondering about this exact thing!! We live in the hot & humid Southeast and summer temps are 90-100 for months. I am considering getting a wood stove but instead of one that heats up the house I would love to find one that is designed for hotter areas/designed to keep the house cooler!! Anyone have hot weather stove recommendations/ideas??
Kate Downham
gardener & author

posted 1 month ago
I wrote about this stove earlier in the thread. I've wanted one of these for a long time.

I didn't know if we'd ever get here, but here it is, we now have my dream stove, a Homewood Heritage.

This one cooks differently from the Rayburn - after the initial draw is established in the flue after around 10 minutes, I turn a switch and the heat gets circulated underneath and around the top oven. It gives all-over oven heat instead of the top heat of the Rayburn, and the bottom oven gets to a good temperature for slow cooking.

I can bake 8 loaves of bread at once in this!

The bottom wheel intake below the firebox works in a similar way to my old stove, but there is more airflow and a bigger firebox, so it behaves a bit differently.

Very happy with the new stove and being able to see the fire - much easier to see what is going on and to make adjustments. It's summer here now and we can deal with the extra heat by opening windows and minimising stove use, in winter the extra warmth will be appreciated.
_B188352-cropped-more.jpg 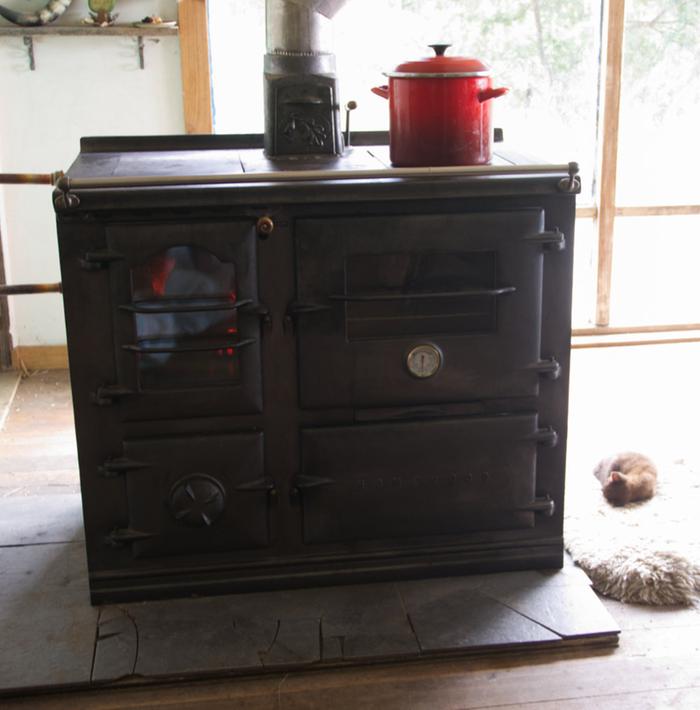