Mike Haych wrote:Tom, do you have a source for the information that you are providing?


Hi Mike, It was from multiple sources. TC permaculture was one, another I remember is found at http://theorchardhousepcdesign.pbworks.com/f/Dynamic+Accumulators.doc as well as Edible Forest Gardens Vol II

A lot have the same information but there were some not listed on one and were on another source. I tried to get as many on the list as I could find.

Edited by moderator to shorten link

posted 5 years ago
I confess: I haven't been very scientific about my seed mixes for cover crops.

It makes a wonderful mess of green. I loosen the soil with my broadfork, then take handfuls and throw them across the bare spots after moving my chicken tractors, following that up with a sprinkling of straw to keep in moisture.

Here's a picture of the seed mix: 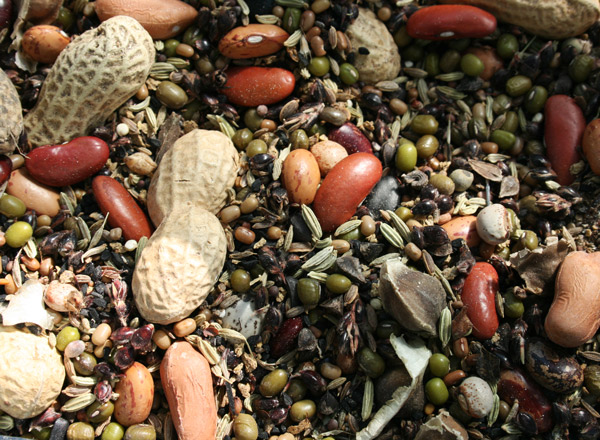 Robert Kourik
Author
Posts: 77
7
posted 5 years ago
The upper horizon of the soil is where the most nutrients are liberated. One of the most famous deep-rooted, supposed dynamic accumulators is comfrey (Symphytum officinale). (Dynamic accumulators are those plants thought to gather more of particular minerals than other plants.) When it comes to the accumulation of NPK and silica, the anecdotal opinion is that comfrey is a dynamic accumulator plant with long roots that mine minerals and nutrients from very deep in the soil. (There are reports of comfrey roots reaching as much as ten feet into the ground.) As to comfrey being a dynamic accumulator, it’s hard to find any data. I was able to find a study that showed that the immobilized tannins prepared from lateral roots of comfrey chelated (pulled out) 3.5 times more lead from the soil than those from the taproots. Yikes—comfrey as a lead-accumulator plant! I have found no documented taproot down to 10 feet.

posted 5 years ago
In a different thread we have another list of dynamic accumulators that includes the minerals each plant is thought to accumulate.

a mix of deep rooted species that accumulate large amounts of minerals effectively.

Cleaver and chickweeds are deep rooted???

I have to echo Xisca Nicolas' skepticism. Cleavers have appeared in my young and evolving garden in the last couple years, but I find them annoying and intrusive and generally try to clear them out in favor of just about any other species. In the process, they have struck me as anything but deep rooted. They uproot with only the slightest touch, forming tumbleweed-like balls of greenery.

John Polk wrote that poultry love it. If that is true for waterfowl as well, then perhaps my future ducks will enjoy it and keep it under control. In the meantime, I will keep pulling it, supposed dynamic accumulator or not.
Ivan Weiss
Posts: 183
Location: Vashon WA, near Seattle and Tacoma
posted 5 years ago

Anyway, lab studies aren't relevant since comfrey has been shown to cause liver damage and has killed at least one person.
study

I have been feeding comfrey, by the 30-gallon garbage can full at a time, to cattle and hogs on my property for the past 30 years. Except for an occasional occurrence of fluke, not only have all livers been clean at slaughter, but the animals eat comfrey with great gusto, and fatten up on it considerably. When sheep have been on my pastures, they have eaten comfrey right down to the ground. So I'm going to side with Juliette de Bairacli Levy on this one. I spread it everywhere i can on my five acres. I find it the single most useful plant I have available.

Ferne Reid
Posts: 131
Location: SW Tennessee Zone 7a average rainfall 52"
4
posted 5 years ago
Coming to this thread pretty late, but I wanted to address the toxicity issue. I'm a retired RN who, for the last 7 years of my career, was a Certified Poison Specialist in a poison control center. I have an advanced certification in toxicology.

ANYTHING (even water) is toxic in the right amount. The "right" amount varies by substance. You would need to ingest 200mg/kg of tylenol for me to send you to the hospital, and even then, with adequate medical care, you would survive. A tablespoon of antifreeze would also make me send you to the hospital, but I would give you lower odds of survival than I would the tylenol.

There are very, very few toxins that will kill you instantly. The majority of known toxins will produce symptoms that, while unpleasant, are usually not life threatening.

Every drug and/or natural substance has a margin between therapeutic and toxic. Drugs aren't approved for OTC use unless that margin is huge, because they know that there is an enormous segment of the population who believe that if some is good, more is better.

So when I'm looking at toxicity data, I look at the dose of the substance used in the study. If it's way beyond what most reasonable people would use on a regular basis, I have to question the findings. If it took that high of a dose for them to prove toxicity, then the therapeutic-toxic margin is pretty wide. I would consider that using a normal amount would be safe. I also tend to take rat studies with a bit of salt. Rats get tumors if you look at them sideways.

I have used both comfrey and coltsfoot many times with absolutely no ill effects.

But having said all that ... in the end, you have to do what you're comfortable with. If the idea of a plant being potentially toxic at all scares you, then you probably shouldn't use it. However, I think there is little value in arguing toxicity, other than linking to information that a poster might not know about. If I've looked at the data and used the plant successfully myself, you are not going to convince me that I shouldn't continue to use it. If you believe its toxicity to be above your personal comfort threshold, I am not going to convince you that it's safe.

posted 4 years ago
Did Fukuoka use daikon radish as a soil conditioner? Surprised no one mentioned it yet. Also i assume if a plant is tall and cone shaped it has a deep taproot, like thistle and many dandelion like variants. But even before the science catches up with specific nutrient profiles the fact that you can stack carbon (biomass) on top of the soil is going to add organic matter to the soil. Mulch helps moisture retention which must help soil ecology equals organic matter, not to mention whatever nutrients are in the plant matter itself
Daniel Hall
Posts: 2
Location: Spokane, United States
posted 4 years ago
Comfrey is always devoured by deer on my property. It is hard to believe that it could be so desireable to wild animals yet poisonous to others as animals have insticts about what is edible. Both comfrey and yarrow are great bioactivators for compost but they must be dried first as comfrey easily roots from the stem and is nearly impossible to eradicate once established as it has a large deep tap root. Yarrow runs underground like wildfire so make sure they can't invade other areas. I plant them in the mulch beneath my fruit trees and chop or pull and toss on top to dry. This is my preference and I don't expect everyone to want to use the same method with these persistent plants.
Leila Blair
Posts: 33
Location: Palominas, az
4
posted 4 years ago
My 4 acres in Arizona are covered in pigweed, which is a wild form of amaranth.
My goats love it when it is tender and green, but in the fall it gets stickers and can give a horse colic. would this be considered a dynamic accumulator?
Bobby Clark Jr
Posts: 34
Location: Lamar County Mississippi
1
posted 4 years ago

Daniel Hall wrote:Comfrey is always devoured by deer on my property. It is hard to believe that it could be so desireable to wild animals yet poisonous to others as animals have insticts about what is edible. Both comfrey and yarrow are great bioactivators for compost but they must be dried first as comfrey easily roots from the stem and is nearly impossible to eradicate once established as it has a large deep tap root. Yarrow runs underground like wildfire so make sure they can't invade other areas. I plant them in the mulch beneath my fruit trees and chop or pull and toss on top to dry. This is my preference and I don't expect everyone to want to use the same method with these persistent plants.

Thanks for the heads up about deer liking comfrey! I will have to watch my newly planted ones. I was not aware of any animals that comfrey is poisonous for. Certainly not humans, rabbits, or chickens. As for yarrow, I wish it would grow here that easily as it is a good medicinal as well.

Liz Hoxie
Posts: 249
Location: Ellisforde, WA
4
posted 4 years ago
I haven't read all the links about dynamic accumulators, but they WILL NOT a'umulate minerals that aren't present in the soil. If you're in a selenium poor area, it can't take up selenium.

posted 1 year ago
A few things I wanna say... I think that the confusion about comfrey comes from the little-known fact that comfrey is not just a nutrient accumulator, but a toxin absorber. It aggressively pulls toxins and heavy metals out of the soil... if they are present. In that case comfrey is dangerous to eat. If the soil in question is not contaminated, comfrey should be just fine for human consumption.
I don’t understand why anyone is arguing about dynamic accumulators. If a plant has high mineral content, obviously the minerals cane from somewhere. And obviously, the plant rots afterwards, directly on top of the soil that the nutrients presumably came from. And obviously, the plant was using these minerals as parts of organic molecules. It is also known that when plants decompose, they leave stuff behind them in a generally harvestable form. So, what’s the problem?

Mary Ann Chobotuk
Posts: 1
posted 9 months ago
Has anyone used nettles to make FPJ- fermented plant juice as an organic fertilizer for your garden plants? What results have you seen? Has anyone used other medicinal plants to make FPJ?