posted 6 years ago
Thanks! Yes, I like to think all those darn rocks are serving some sort of purpose!

I forgot to post about the baby tomato plants that are sprouting in my direct-seeded tomato project (inspired by: https://permies.com/t/3500/plants/tomato-experiment-transplant-direct-seed)

posted 6 years ago
Below is a pic taken this morning of the cowscape across the road. The neighbor has about 15 cows on about 100 acres of pasture, so his place has 3 times as many cows as it can carry. The grass is about as short as it can be and still be called grass and not moss. The neighbor feeds the cows hay, but they'd really rather graze. To be fair, on our side we have 5 sheep on approximately 5 acres of pasture, which is about 5 times as many as there should be. Grossly overstocked. Gross overstocking is pretty typical for this region, because tracts tend to be relatively small and the carrying capacity is low, and people don't realize they can't just put as many animals as they want without grazing the place to death. Lately I've been keeping my sheep in a paddock most of the time and bringing them branches to browse on, letting them out to graze a little later in the day, and keeping them in the paddock all day sometimes. I think we all could do a little better with livestock here with managed intensive grazing, but I never see anyone doing it. Could be they don't know about it or could be they can't afford fencing or don't want to put up more fencing. I won't be replacing my sheep when they pass away, because we already have plenty of wild herbivores; native Whitetail Deer, as shown in the next photo, and exotic Axis (Chital) Deer.

posted 6 years ago
Finished fencing the Plum Project, and planted it (except not the plums). Some of the seeds planted: Honeylocust, Palo Verde, Moringa, False Indigo Bush, Mexican Bird of Paradise, Esperanza, Cowpea, Black-eyed Pea, melons, winter squash, tomatoes, peppers, and a mixture of flowering plants and some old things I had in the fridge.

posted 6 years ago
Toted a bunch of rocks:

posted 6 years ago
Started another understory fruit tree bubble. This one will be for pears.

posted 6 years ago
The kitchen garden viewed from the upstairs porch: 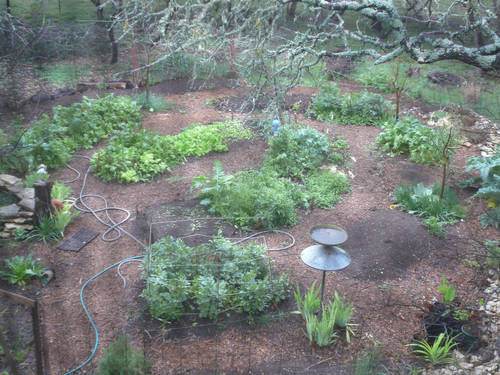 These wildflowers are known as "Scrambled Eggs" 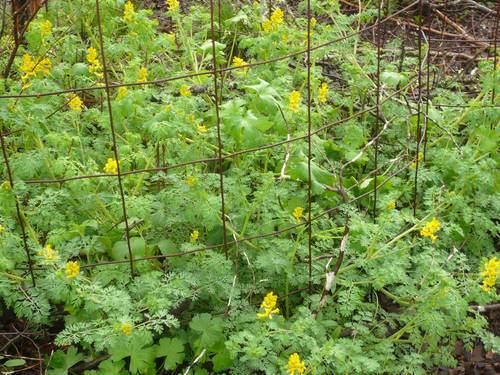 posted 6 years ago
Made this little marsh garden from a half-barrel left over from a failed aquaponics experiment. Planted with Louisiana Iris, but I hope to get some Water Chestnut somehow to plant in there.

posted 6 years ago
hah, you have bench and pond envy, I have kitchen garden and fencing envy. Looks good out there, keep up the good work!

posted 6 years ago
Thank you! 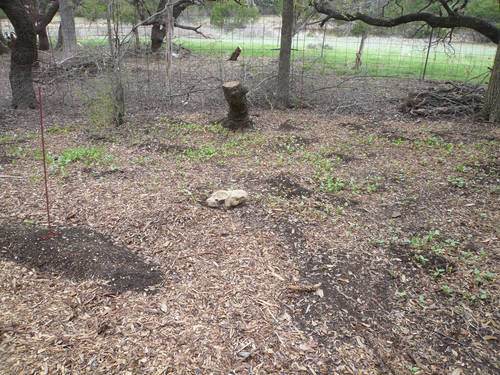 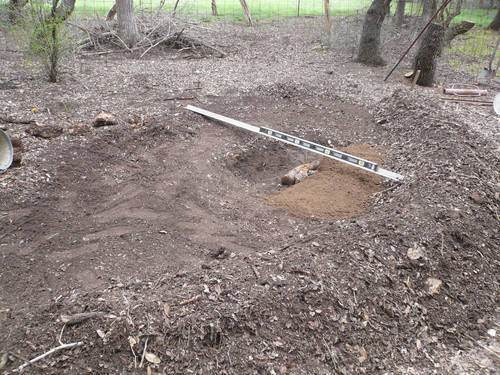 Wanted to get a photo of these insane Cardoon plants before I cut them back:

posted 6 years ago
Hadn't posted an update in awhile, so here's a pic of my potato bed planted Feb 24:

posted 6 years ago
Another big project I'm working on is making log berms along the power easement where we get a lot of runoff from the road. I'm hoping these will act somewhat as a swale to help slow the water and let it soak in.

posted 6 years ago
Trying the "feed your chickens on compost" thing with my small flock.

Where I got the idea: http://geofflawton.com/videos/chicken-tractor-steroids/

posted 6 years ago
Some updates; The kitchen garden today, the 5 survivors of the direct-seeded tomatoes experiment which survived multiple frosts, and baby watermelons in the greywater basin.
ap122016.jpg
directseedtomatoes.jpg
greywatermelons.jpg

posted 6 years ago
View out the back window:

posted 6 years ago
Expanding the kitchen garden a little by removing rocks and making them into a berm across the slope west of the garden.

posted 6 years ago
We borrowed the neighbors' tractor to move this big rain tank to the citrus area. https://permies.com/t/53597/trees/Lemon-scheme
tankmove.jpg
twotanks.jpg

posted 6 years ago
There were at least five stags in the herd of Chital behind the house this morning. Here's two of them:

posted 6 years ago
We had flooding rains last night so our top basin filled up and overflowed down the spillway:

I also saw the pictures you posted of the brushdams and checkdams. I hope they will all continue to increase deposits and help a bit in the control of the water.

How long does it normally take for the basin to loose the water?

posted 6 years ago
Thanks! It is beautiful. The water stay for just a day or two, usually. If the soil is very saturated, it may take longer, but it never stays for even a week as these basins are constructed specifically to infiltrate water instead of holding it.

posted 6 years ago
That's great, that's a lot of water you manage to retain.

I commented before on another topic you posted about swales and more basins. My comments there were based on the impression I got that your land is steeper than it actually is. Having seen some pictures now and especially the one picture above of the basin you mentioned in that topic I need to change my advice. This basin clearly functions and if you can add more of them anywhere on relatively flat terrain I think you should go for it. You can retain a lot of water like this.

Success! It's really great to see the standing water!

posted 6 years ago
Bracket fungi in the flooded woods:

posted 6 years ago
Fantastic news - thanks to the lovely photos of the basin which my husband posted on Facebook, our immediate upstream neighbors want to put a basin on their place! This could not only save our driveway, but save the county road as well!

posted 6 years ago
Connected the two house water tanks, dug a small basin (I think it needs to be a bit deeper).

posted 6 years ago
Dug another basin in the back yard to get ready for the coming floods...
backyard.jpg

posted 6 years ago
Thank you!

posted 6 years ago
Nice work here. Giving me many great ideas what to do on my lands as I have a similar landscape as far as digging into the ground goes. Gotta love the rocky basins of Texas.
Tyler Ludens
pollinator
Posts: 11846
Location: Central Texas USA Latitude 30 Zone 8
1192
I like...

posted 6 years ago
Thank you! I'm trying to figure out how to obtain a couple of citrus trees without having to pay a fortune in shipping....

Tyler Ludens wrote:Thank you! I'm trying to figure out how to obtain a couple of citrus trees without having to pay a fortune in shipping....

once I get some micro climates set in I will attempt to see if I can grow citrus up here on the high plains. If it comes down to it I may even dig into the draw wall more here and build me a green house just for citrus and bananas. I am in an area that is close that is 7b/8a just know that I will have to have protection for the cooler weather for sure but see what I can work out in the long run.