Where do foxes fix in permaculture design?

alex Keenan
Posts: 493
15
posted 6 years ago
Deer frequently take the blame for spreading Lyme disease. But a new study suggests that foxes are a more critical link in a complex web of interactions that have contributed to rising rates of the insidious infectious disease, while deer have nothing to do it with it.

The study emphasizes how important stable food webs and strong predator populations are for human health.

"Small changes in predation can lead to large changes in Lyme disease risk," said ecologist Taal Levi, who completed the study while at the University of California, Santa Cruz, and is now at the Cary Institute for Environmental Studies in Millbrook, NY. "This argues for top predator conservation, or at least that there are unintended consequences for people of losing them."
Matu Collins
Posts: 1947
Location: Southern New England, seaside, avg yearly rainfall 41.91 in, zone 6b
79
I like...

posted 6 years ago
Lyme and its coinfections Erlichiosis and Babesiosis are very serious considerations in my area. We have many and varied predators here too, this is an interesting topic to me.

Foxes are welcome in my design. I keep my chickens locked up in the nights. Last winter there was a great tracking snow and a fox walked through my field, sat down facing the garden, then stood up and walked on into the woods. The tracks were so clear, even the tail print was visible.

Your last post was both eloquent and technically excellent...

Back many decades ago now, before "permaculture" was a known, folks often wondered how I could have what appeared to be such an "overburden" of predators in and around my small homestead. I told them what they saw was what it was suppose to look like...and what was seen else where was the aberrance. All these wonderful predators have a special place in my heart, and the sacrifice of a chicken, rabbit, or what have you by their claw and fang (or my own to give them) was a small price to pay for their company...And the rewards of that company are boundless...

I am inoculated for Lyme disease oddly enough with the same vaccine as dogs and cats get... You could say I did it for them as the research Scientist discovered that the strain of inoculant was too strong and virulent for most humans, killy an unfortunate few in the Lyme Studies at Stanford...a few of us "strange one" seem to be more "cat and dog" than we are human...or maybe that is just a "gift" for taking good care of the "predator side of the food chain..."
Miles Flansburg
pollinator
Posts: 4665
Location: Zones 2-4 Wyoming and 4-5 Colorado
464
I like...

posted 6 years ago
I have a den of fox every year, at my Wyoming place. This one was around the camp all summer.
foxincamp.JPG 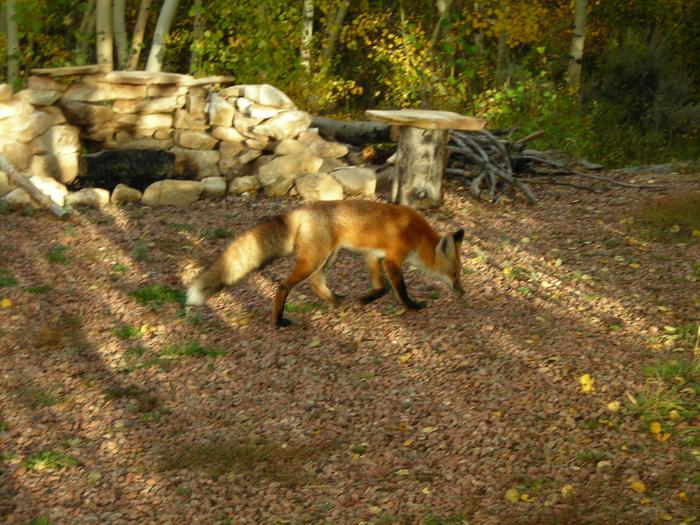 posted 6 years ago
My house is deep in the woods. My LGDs convince most predators to keep moving, just by barking at night. I see foxes occasionally in the valley. The coyotes used to howl with the noon whistle but the dogs have moved them to the river.

I've been spending a lot of time in the woods this summer and hope to continue to do so but I did find 4 ticks on me this year & I'm starting to wonder if my luck has run out.

IMO the best design response is to include Guinea Fowl which I hope to add in the spring.

Ravnor Chanur
Posts: 8
1
posted 6 years ago
There has been some interesting work recently on the relationship between wolves, coyote, and fox, for example:

The theory is that wolves suppress coyote and coyote suppress fox, so the extirpation of wolves from much of north america led to an increase in coyote (and large game, which wolves hunt but coyotes do not) and a decrease in fox (increasingly harassed by coyotes) and some small/midsized game species. The pre-contact fox population, particularly in the western U.S., may have been much higher than it currently is.