James D Young
Posts: 64
Location: Brantford, ON Canada
1
posted 6 years ago
http://www.durgan.org/URL/?BNQMB 27 September 2014 Concord Grape Juice
Thirty three liters of juice was made from 90 pounds of Concord grapes.The grapes were picked in Thorold, ON. Grapes were washed, removed from substrate by swiping across a plastic screen, cooked about 15 minutes, beat into a slurry with a hand blender, strained through a food mill, placed in liter jars and pressure canned at 15 PSI for 15 minutes for long term storage. Three liters of water was added to each 30 pounds to thin and to facilitate cooking.Pictures depict the process. 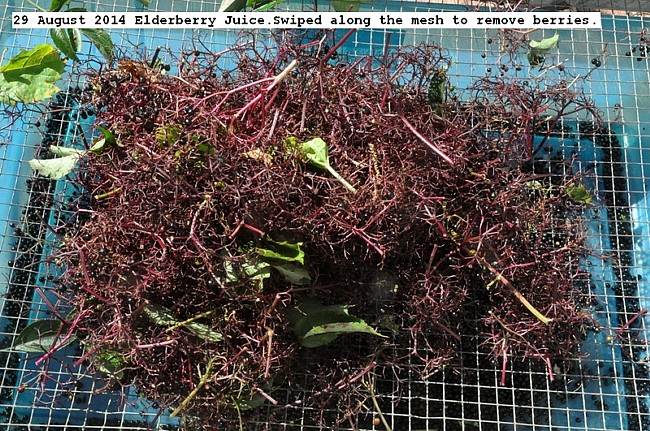 Jennifer Wadsworth
Posts: 2679
Location: Phoenix, AZ (9b)
194
posted 6 years ago
Wow - I can just taste that delicious juice! Thanks for sharing.

posted 6 years ago
Is there a blog post you could point us at where you've laid out the thinking and scheming that's obviously behind your impressive program of juicing all the things and then canning all the juices? You're putting way too much energy into this not to have some carefully thought-out reasons, and I find myself wondering what they are.

Dan Boone wrote:Is there a blog post you could point us at where you've laid out the thinking and scheming that's obviously behind your impressive program of juicing all the things and then canning all the juices? You're putting way too much energy into this not to have some carefully thought-out reasons, and I find myself wondering what they are.


My comment is somewhat philosophical. The process evolved over time. I have found most people are hide bound by media propaganda, convention and the view that food preparation has to be tedious, and the commercial producers have consumer interest at heart. Utilizing the bounty of Summer for off season use is the aim, and to reduce reliance on commercial products, which I view with suspicion. People preserve produce and the product is only desirable for short periods. I know a lady who has a basement with many jars of preserves that never get used. They preserve (keep) but are palatable in small amounts. For example, How much sauerkraut, dill pickles, salsa, etc. can your eat and is it nutritionally sufficient?

After musing about this issue for some time I decided to experiment with juicing and pressure canning. I find the end product to be desirable and it is probably nutritional. I add nothing to the produce except water. Preparation time is minimal, since I basically take the produce as is and process. This year I have about 150 litres of wholesome food and ingest about half a litre or more per day. I also dehydrate judiciously, cold room storage, vacuum packing, and a bit of freezing, or a combination. Also experiment and add new food from other cultures if found suitable and available.

This is the consolidated pictures of the preserving of fruit and vegetables for the off season. I have been basically living on this, almost as my main diet.Of course,I eat other food as required. I have lost 15 pounds in three months (205 to 190) and am full of energy and very active. With experience, I have ascertained that one can preserve almost any fruit and vegetable, only limited by the availability and imagination.

What I like about the method is, the product is ready to serve by opening the jar. There is no added sugar.

I don’t eat sugar (don't have it in the house) added to anything, and consequently find most of the products sweet to some degree, except for some of the vegetables. I have several jars on the go in the refrigerator simultaneously, and mix in the glass sometimes prior to ingesting.

Everything in the garden can be utilized. I got some surprises. Cucumbers for example, simply juiced are most pleasant and filling.

The point being that maybe the old methods had some short comings. Canning was hard work. The equipment available today make the process much easier. The hand blender, the screens, the mechanical hand strainer, and of course the modern juicers to extract the ultimate from the strainer residue. Also the Pressure Cooker method of canning to reduce the possibility of food poisoning due to bacteria.

Over the years we have given food preparation to commercial poducers, and I believe we are suffering due to this, evidenced by the obesity epidemic and the general ill health of people as they age. No, this is not the only issue, but one that can be addressed by the individual.

posted 6 years ago
Thank you! You have expanded my perspectives.

I think I have a happier view of traditional home-canned foods, which formed a great part of my family's food storage system when I was growing up. And some of your juices strike me as not likely for me to enjoy. But in reading through your juicing notes, there are quite a few spots where I was thinking "that makes more sense than anything I would have done with that surplus!"

James D Young
Posts: 64
Location: Brantford, ON Canada
1
posted 6 years ago
I was slightly concerned about some of the produce, more from tradition than any substantial reason for avoiding. Now I consider it all the same and go for nutrition more than anything else. I sort of subscribe to the mantra of "eat more fruits and vegetables".

For years I use to simply beat raw material in the blender and drink. With experience I have found in general cooked is far superior, and I feel one gets far more nutrients by cooking.