Sam Barber
Posts: 641
Location: Missoula Mt
43
posted 6 years ago
We have several erlenmeyer flasks for making drinks in. We originally had three but now we are down to two (due to a potted plant disguised as a snow pile that was going to be used to chill some lemonade). One of the things that was wondered about this morning during our glass conversation at breakfast was whether there are differnt glasses used to make the flasks that are better and ones that are worse. Also what companies make good quality flasks and which ones make shitty ones? 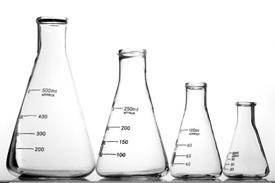 Mat Smith
Posts: 125
Location: Gold Coast Hinterland QLD, Australia
3
posted 6 years ago
There most definitely are different grades of glass.
'Soda Lime' glass is the cheaper low quality glass.
"Borosilicate glass' is the better quality stuff.
Any glass labware I buy now is borosilicate only.
I have used Bomex and Simax brands and both seem as good as each other to me.