Tell me all about geothermal

Will Holland
Posts: 300
Location: CT zone 5b
7
posted 6 years ago
Ok so I know basically how it works- there's a ton of poly tubing or something in the ground and it circulates a liquid that uses the more or less constant temp of the earth a bunch of feet down. I also got that they can install said rubes horizontally or vertically.

Does the whole thing run on electricity to pump? Anybody here have it?

I think the idea is neat. There are a few places around here that have geothermal systems, but they're surrounded by giant lawns. Could you lay one down and then plant a food forest on it? I wouldn't be interested in it if I couldn't stack plants literally on top of it most likely. I guess I'm also not as interested on cooling as I am in heating. It's only hot here for 2 months, and it's totally bearable.
David Livingston
pollinator
Posts: 4328
Location: Anjou ,France
243
posted 6 years ago
its not uncommon here in France but it costs lots and yes you need electric to make it run but as far as I am aware you can grow stuff on top of it but not trees .

posted 6 years ago
I think what you are referring to is technically called geo exchange. Geothermal refers to getting energy from deeper in the earth where heat and steam can be found.(like a volcano power plant where steam from the core of the earth turns a turbine).

I recently went to a conference where some engineers talked about the geo exchange systems they had installed around down town. There are a lot of wells under grass fields, parking lots, and streets, but not much of a mention about forested areas. I would imagine as long as you made sure your well was not being penetrated by tree roots than everything would work fine. They also discussed the use of one super deep well, or multiple shallow ones.

From what I gathered the system is basically standard heat pump/ refrigerator that uses the water in the geo exchange system as part of the cycle. So traditionally when you remove heat or cold from inside your house, the unit blows it outside and it done with it. With geo exchange the heat or cold you remove from the interior of the building is put into the water and pumped down through the well where the temp is neutralized by the stable earth temp. In turn the unit does not have as much work to do when it receiving the water after it is stabilized down in the well. So it's nothing totally new really, just a clever way to make things a lot more efficient by utilizing the readily available underground temp. In my city they utilized this in a bunch of downtown buildings, apparently it can pay itself off in relatively decent amount of time, as long as digging the wells does not hit any snags like solid rock. 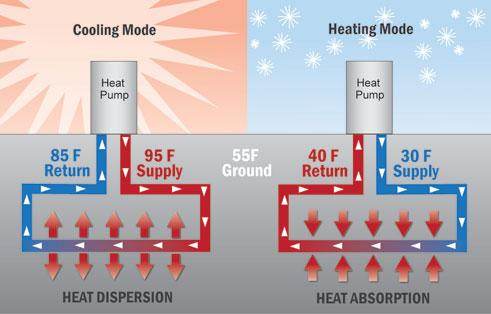 posted 6 years ago
We installed a geothermal heating and cooling system at our house in Wisconsin. The contractors came and drilled 4 "wells" 150 feet deep, one after the other in about 30 feet lineal. They wanted to do this in our side yard, but I had blueberries there, so we had it installed in the front yard, and I took that as an opportunity to relandscape (that's how I found this site, looking for information about hugelkultur!). A fluid like antifreeze was run through the buried wells, and a heat exchanger used to harvest the heat or coolth.

Anyway, it was very expensive to put in, but it worked great. I'd say it worked even more impressively as a cooling system than as a heating system. It's like hooking your house up to a cave. I don't think the heat pump had to work very hard to cool the fluid after it had been through the wells. Yes, the whole thing was electric. A hybrid gas/electric system was possible, but we were talked out of it. The increased efficiency of heating with gas was offset by the decreased efficiency of dual systems, as I recall. This was back in 2012.

Our misfortune was that my job was eliminated and we ended up putting the house on the market when I found a job in Portland. None of the people who looked at our house had any idea what a geothermal system meant, and we didn't have enough data to say "See, you'll save this much money." So, we got zero credit for it. Sort of like the negative "credit" for all the trees and bushes and edibles. The new owners have literally bulldozed the yard and re-established turf on our gorgeous thick earthworm dense topsoil.

But that's another topic. I don't think they've ripped out the geothermal system. It works perfectly.

Geothermal is a great idea, especially for continental climates (meaning, hot in summer and cold in winter). We are unlikely to put one into a place in Portland, because the climate is milder and I'm told we are sitting on bedrock that would make it difficult.

Will Holland
Posts: 300
Location: CT zone 5b
7
posted 6 years ago
thanks for the replies. I think I'm less interested now.
Brian Knight
Posts: 554
Location: Asheville NC
8
posted 6 years ago
It think the best terminology for this technology is Ground Source Heat Pump GSHP. Weve installed them on two of our homes and so far so good. They have lower energy costs and supposedly longer mechanical equipment life thanks to the lower Delta T of the ground compared to the Air source of most heat pumps. Due to the wells or horizontal trenching they are more expensive than air-source. I think the industry prefers vertical wells because people like to dig in their yards. On one project, we dug two dry wells which helped to offset the cost of the system since we had two otherwise useless holes in the ground.

Its common to look at energy efficient upgrades in terms of payback. Generally the less efficient the home the quicker the payback. Existing, leaky homes or those that have a lot of glass (less insulation) tend to make the most sense for them. They enjoy a 60% (fed + state) subsidy in our area which is kind of ridiculous but it helps the math for rich folks a great deal.

If youre building new, and wisely building an efficient envelope, the payback should be beyond the expected life of the mechanical equipment. Mini-split ductless heat pumps are proving to be just as efficient as GSHP with MUCH lower upfront costs. However, some homes are too big and not open enough to make them cost effective compared to more typical air-source heat pump systems or the more efficient but expensive GSHP.

Brian Knight wrote:If youre building new, and wisely building an efficient envelope, the payback should be beyond the expected life of the mechanical equipment. Mini-split ductless heat pumps are proving to be just as efficient as GSHP with MUCH lower upfront costs. However, some homes are too big and not open enough to make them cost effective compared to more typical air-source heat pump systems or the more efficient but expensive GSHP.

One thing to keep in mind is that air source heat pump's efficiencies drop the larger the difference between the indoor air temperature and the outdoor air temperature. While I have no doubt that a radiator-like mini-split would be more efficient heating a house up to 70 when the outside temperature is 55, when it's -20 outside a geothermal will be the hands down winner.

Brian Knight
Posts: 554
Location: Asheville NC
8
posted 6 years ago
I agree. Some mini-splits heat into sub-zero temps which is amazing but the efficiencies suffer. It can be tough to compare the two but its possible. From what I understand, many GSHP manufacturers do not include circulator pump energy use in the COP performance. Mini-splits kind of have an unfair advantage when not ducted as the big fan of a centralized air-handler is sure to gobble up some kwh.

I wonder if they are combining GSHP tech with ductless mini-splits? I know that Zhender HRVs have ground loop upgrades to help condition fresh air introduction but dont think they have heat pump tech involved.

GSHP can also utilize "de-superheaters" to help heat water during the cooling mode and I think one company makes one that heats domestic hot water in both heating and cooling modes.

How about a GSHP thats connected to the fridge and water heater? So much for disentanglement but could see this type of thing being a good option with some R&D.

posted 6 years ago
That's interesting to me, because we had the geothermal system put in when we were in Wisconsin and now we live in a milder climate (Portland, Oregon) and have a ductless mini split system.

Brian Knight
Posts: 554
Location: Asheville NC
8
posted 6 years ago
I think that makes sense. The ground is protected from air temp extremes. Mini-splits make perfect sense for mild climates, especially for those with dehumidification needs in the cooling season. With small, open plans mini-splits are tough to beat in most climates. They pair well with efficient building envelopes and PV.