posted 6 years ago
I would love to eventually make a little video of these, but for now, a simple list will have to suffice. People seem to love the life hack videos and photos telling you how to do amazing things with unexpected items. In the spirit of this, I have been working out a list. Here are five survival hacks.


1 - Use the sun to purify water!
One thing found almost everywhere is people's trash. If you find yourself in a dire situation and have a clear bottle or can find one, you can purify water. The clearer the water is, the faster this works. Just fill it up and let it sit in direct sunlight for a few hours. UV water treatment pens work on this principle, though this method will be a little slower.

2 - Use ceramics to sharpen a blade.
Again, trash can be treasure. Either at home or out in the wilderness, the bottom of a coffee cup or other exposed, unglazed ceramics can be used in place of a whet stone to very good effect.

3 - Dorritos as kindling.
Keeping a mini pack of these in your gear at all times is a great idea. Not only do they offer quick calories, but give you a reflective surface and as a bonus, they work perfectly for lighting fires!

4 - Ceramics or Glass for knapping edges.
Find either of these out in the wilderness where it washed ashore or got tossed away by someone long past and you have a way to knapp an edge even in the absence of flit or obsidian. Of course, in this one you have to have an idea of how to knapp in the first place.

5 - Cotton and two containers can filter dirty water.
Remember the UV having trouble if the water isn't clear from earlier? Taking a container full of mucky water and placing it slightly higher than an empty container. Take a strip of clean cotton cloth and dip it partway into the dirty water so that it hangs partly in the water and well over the side into the empty container. Next, just let it sit for a while and the water will begin to wick into the lower container. Over time, most of the water from the first container will move into the second, but the dirt isn't wicked along with it.

Peter Ellis
Posts: 1536
Location: Fennville MI
60
posted 6 years ago
Two through five I agree, they work. Glass and ceramic knapping is tricky, but IMO easier than flint. But the use of sunlight to make potable water just by exposure? That I don't buy. The UV light sterilizing systems use a much higher intensity of exposure than sunlight provides. Plus there are the problems of toxins, not just biologicals, in questionable water. Some of the chemicals are created by uv exposure.

I am amused by snack food fire starters though.😃

Peter Ellis wrote:Two through five I agree, they work. Glass and ceramic knapping is tricky, but IMO easier than flint. But the use of sunlight to make potable water just by exposure? That I don't buy. The UV light sterilizing systems use a much higher intensity of exposure than sunlight provides. Plus there are the problems of toxins, not just biologicals, in questionable water. Some of the chemicals are created by uv exposure.

I am amused by snack food fire starters though.😃

The key on the UV is that you are exchanging time in place of intensity. While a UV pen can do the job in a matter of minutes, using sunshine is best done over something like 8 hours to be sure. This has been tested though, so in terms of biologicals it will work. As for chemicals, that is another problem entirely. With that said, in a true survival situation, you aren't probably going to have anything on you to clean out chemical contamination anyway. You clean out what you can in that case and hope for the best on the rest.

Peter Ellis
Posts: 1536
Location: Fennville MI
60
posted 6 years ago
SODIS.
Apparently a lab tested method for disinfecting water through six hour or more exposure to sunlight. Which seems to suggest that it is safe to drink from that puddle over there.... it has been in the sun all day...

i still might go for another system. any variation on the distillation process will give you very clean water and can be achieved in a similar fashion.

so now i have an experiment to try.

fun fun. and thanks for teaching me something.

posted 6 years ago
There are way better methods depending on what you have handy and your knowledge. The reason I went with that one for the 'survival hacks' is because it is something very few people know about and requires no particular skills to accomplish. Lots of people keep a clear water bottle on them as well when wandering off for a 'short hike', so bonus there.

Glad I could offer you something new to take away from the posting. For the record, I always loved that snack food makes such great tinder as well!

In case you’re a major devotee of investing energy in the wild, you most likely know a tiny bit about distinctive survival methods. That is to say, it’s generally a smart thought to take in two or three tips and traps when you’re hanging out in the components with wild creatures.

1. This trap can be utilized to capture littler creatures. 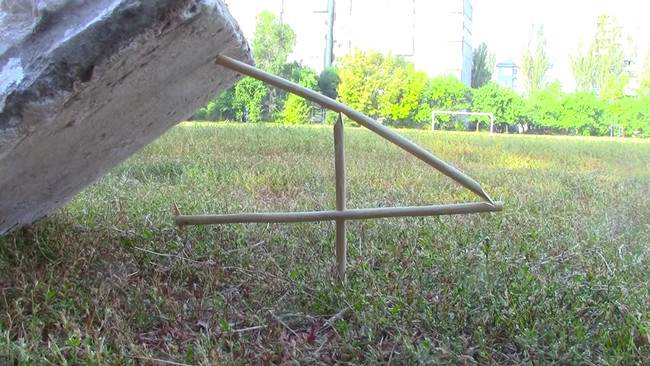 posted 5 years ago
~For fire starter, I usually grab some birch bark when I see it, and put it in my bag or pocket. One of the amazing things about birch bark is it will light after being plunged in water; just wipe the excess moisture and get busy with it as tinder. Another great one (and unexpected like Doritos) is dried citrus peel. There are volatile oils in the peel that spark and crackle when lit (similar to birch bark); they can also be used for a vitamin C rich tea.

~A simple and quick knife edge can be made by taking a large round rock and smacking it on another (being careful to shield your eyes). You might have to hurl it at a stone to break it. The disk that comes off will likely have a serviceable edge for cutting or sawing various things on a short term basis. A large round stone will produce quite a few blades.

~The best survival water purification in my opinion, is boiling. The following survival hack requires multiple steps; all fairly easy with some perseverance. It is fun, so it's a cool thing to do when you don't NEED to do it.

1.) Toss lots of small stones (not from a creek or other water area as these tend to trap water which becomes steam and explode) into the fire to heat up. Get them really hot.

2.) A simple bowl can be produced by placing a hot coal on an appropriate piece of wood (right size/non toxic). Blow on the coal (gently so as not to blow the coal off the wood-practice you'll get it, and it gets easier fast). Char and coals are produced on the wood surface. Scrap the charred area with your homemade stone disk knife, sharp rock, or actual knife. The bowl is started. Repeat until you have a servicable bowl. Go fill it with your water.

3.) Once the bowl is full of water, get a couple of sticks to use as chopsticks and pick some of those super hot stones you have been heating out of the fire. Add these to water that you have put in your fireside bowl, until you get the water to boil, removing them as their heat is lost to the water. Continue to replace stones until the water boils for long enough to satisfactorily kill bacteria. Some say ten minutes, other say less (after all it was killing all kinds of bacteria as it got up to boiling too). As soon as it has killed the bacteria carefully set it aside where you will not spill it. Go gather some more firewood. When you return it will be cool enough to drink. Drink no more than a couple cups (half litre) at a time, so that your stomach doesn't get depleted of electrolytes. As soon as the water is done, boil more to drink later. Making a second bowl will allow continuous water purification.

*The second most important survival hack is to give yourself things to do. (build a fire/build a figure 4 trap like the one in the pic above---not as easy as it looks, but simple enough~practice!) This allows the mind to be occupied and accomplishing things which are great; the opposite: a mind that can turn on you and you end up not being productive at all- a vicious circle that can kill you. Build a fire. And if you can't then Build a shelter. Insulate your clothing with dry material. If you can get a fire going, the afterwards find dry firewood. Etc. There is always something to do.


*The number one survival hack is always to keep calm. If panic sets in, stop it. Calm yourself down. Talk to yourself (don't just think, talk it out). Think of things to do {out loud}. Be positive. Be productive.