LED head light review. Coast brand. Not a car light. You wear it.

Dale Hodgins
Posts: 9002
Location: Victoria British Columbia-Canada
666
posted 5 years ago
This light was on sale at Home Depot the other day.  I bought it for $32. It's the best quality light of this type  that I've seen.

This light has a continually variable switch and goes up to 214 lumens. I prefer the variable switch, to buttons which give two or more settings,  often flashing or some other bothersome function. I have two lights, which are the type worn by cyclists. Both produce 40 lumens.

The lowest setting provides just enough light so that I don't trip over things. On the maximum setting, it's quite bright and I could easily see working using power tools with this quantity of light.

It comes with clips to attach it to a hardhat. I often find myself in or under buildings that have no electricity. This can make for dangerous working conditions.

The light is on it's high setting in the bathroom in the third photo. Notice the dark shadow made by my phone which took this picture. This illustrates the difference between the illuminated bathroom and how dark it is otherwise. 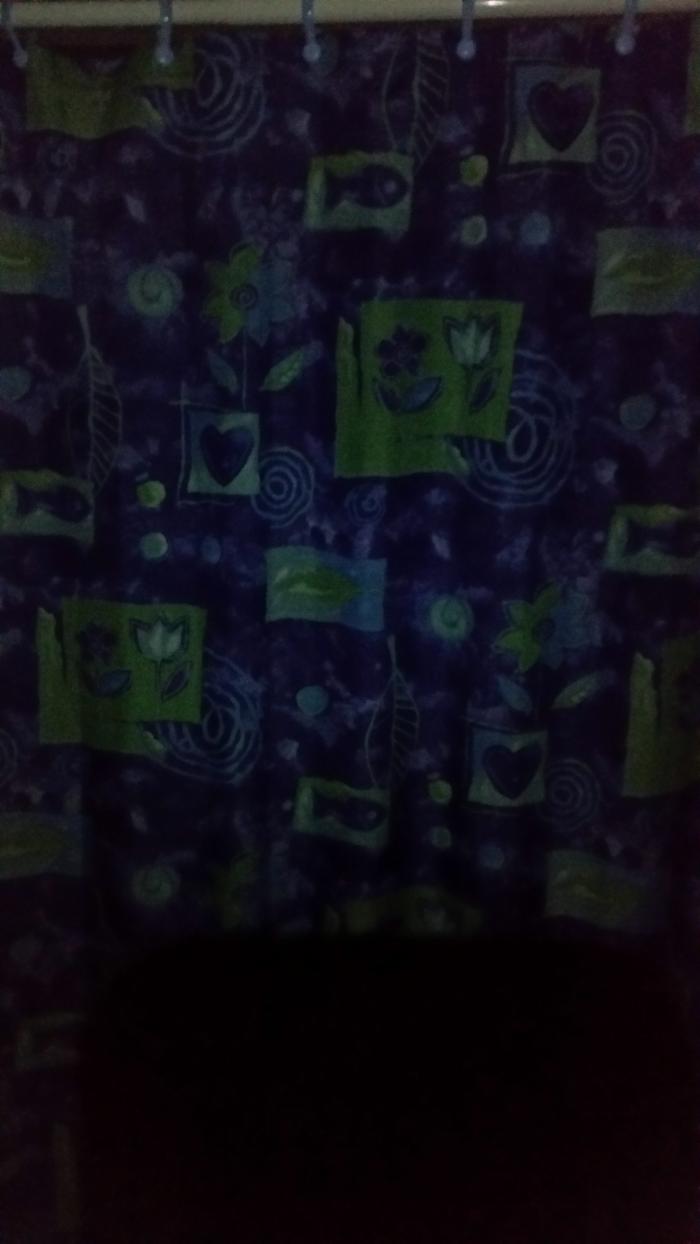 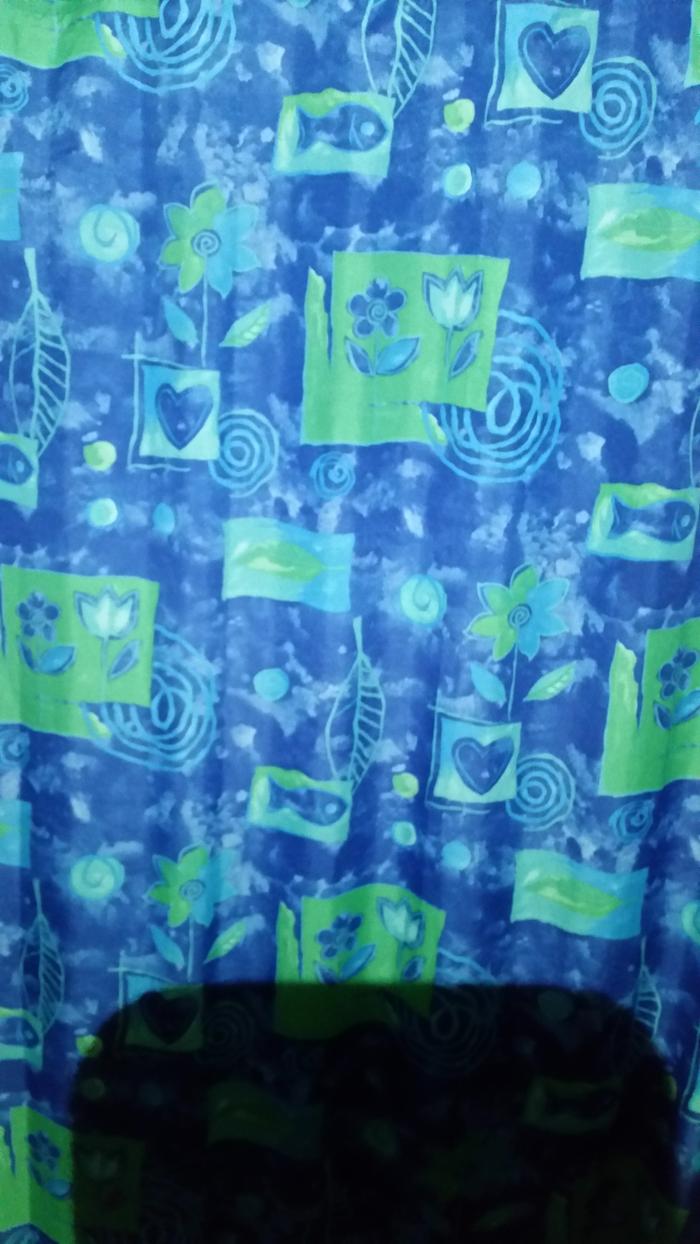 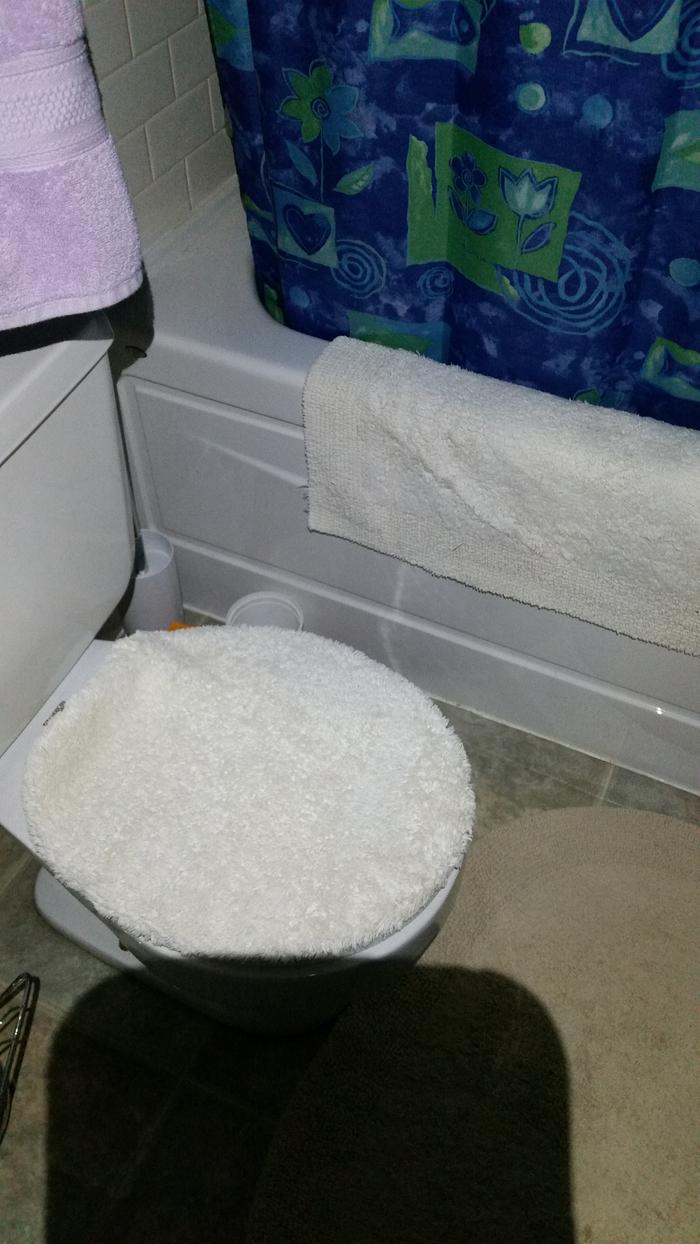 Dale Hodgins
Posts: 9002
Location: Victoria British Columbia-Canada
666
posted 5 years ago
Here's the light. Notice the hair that rides a few inches above me. It's a medical anomaly 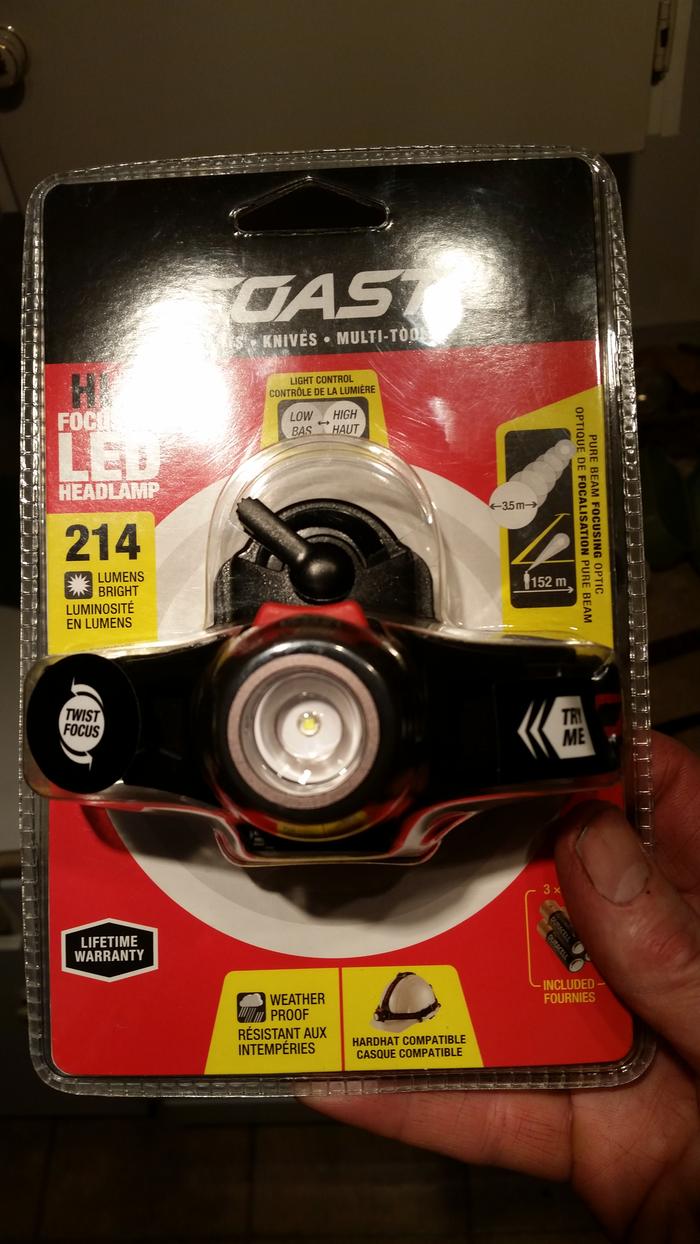 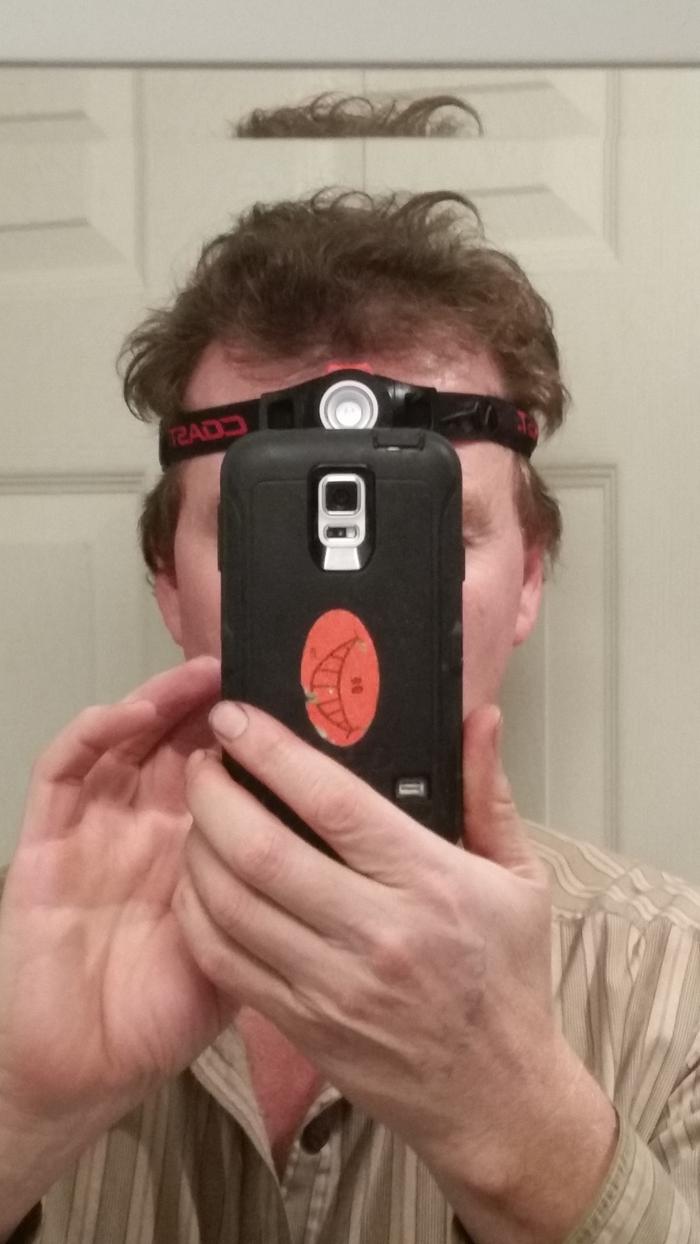 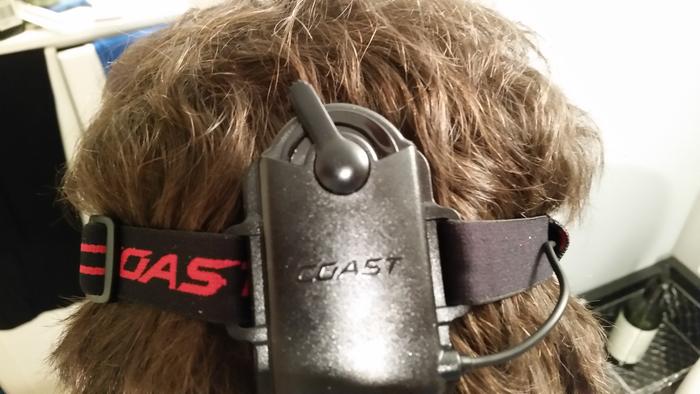 Dale Hodgins
Posts: 9002
Location: Victoria British Columbia-Canada
666
posted 5 years ago
Here's my friend's house. That's a Charlie Brown tree cut from my property. It's almost 10 feet tall, but only one inch in diameter,three feet from the top. This large space is pretty well lit.

It uses triple a batteries. I will buy rechargeable lithium-ion batteries to replace these disposables. 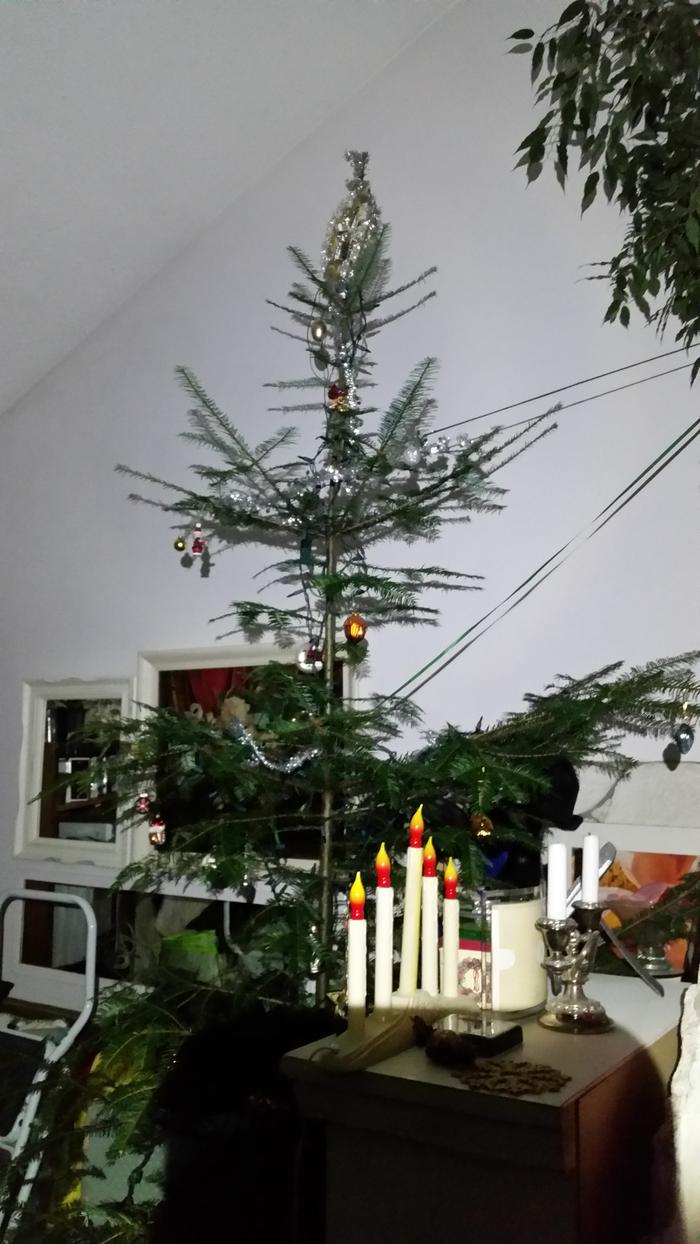 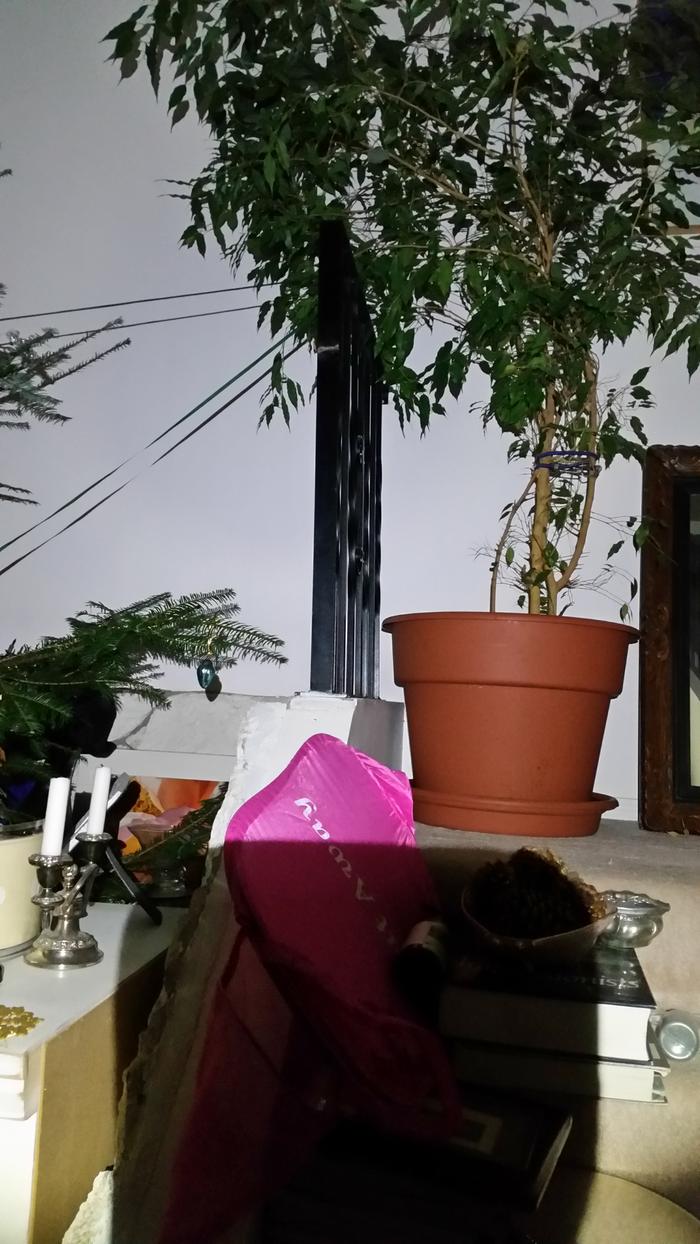 Ghislaine de Lessines
pollinator
Posts: 261
Location: Vermont, annual average precipitation is 39.87 Inches
43
posted 5 years ago
Thanks for this review! I have a couple of Coast brand LED flashlights that are perfect for candling eggs. Our best headlamp right now is from L.L.Bean but we could definitely use some more. We just got through a series of power outages during the last week and headlamps are awesome at such a time.

posted 5 years ago
Does the packaging say anything about how long the battery life is?

R Scott
pollinator
Posts: 3478
Location: Kansas Zone 6a
58
posted 5 years ago
Wish they would have used double A. They last so much longer.

I stopped using headlamps when the 2 AA LED's got good. Easier to carry in your pocket. I may need to consider going back.

I do a lot of work that involves going under houses that have no electricity. I'm looking for some sort of illuminated pylon similar to what is used in emergency response. Currently,  breakable bulbs on a cord are moved and a generator is used. It's a very cumbersome,  noisy,  stinky system.
Andrew Hill
Posts: 4
posted 5 years ago
Looked online for the manufacture website after looking at this headlamp review. Looks like it must of discontinued or changed design because I can not find the one you have. For 32 bucks that is a great steal! If anyone finds it online if you could copy the link for me I would love to buy one. Great review Dale.