Tim Straw
Posts: 9
posted 5 years ago
While a concrete floor and wall can make up part of a thermal battery, they can also be a path for heat to escape. Is it better to insulate the wall/floor or use it as part of the battery?
Peter Ellis
Posts: 1526
Location: Fennville MI
59
posted 5 years ago
Why think of it as an either or situation? Are you talking about an existing structure, or one to be built? If you put insulation under the floor, then you have it as part of your thermal battery. Same with walls, insulate the exterior and the wall is part of your battery.

Posts: 3113
Location: Upstate NY, zone 5
152
posted 5 years ago
That depends on what is on the other side of the floor or wall. If you want heat from all surfaces of the concrete, treat it as part of the mass; if they are exposed to outdoors or the ground or an area you don't want to heat, insulate them.
Tim Straw
Posts: 9
posted 5 years ago
Thanks for the response! It's an already existing structure. It's a basement -earth backed wall and floor. So I will insulate. I have lots of sand on the property ( no clay ) that I can use to insulate the floor ( 2 to 4 inches ) but I have a feeling that man made insulation such as 2 inch foam ( then 2 inches of sand would be more efficient.
20150127_170452.jpg 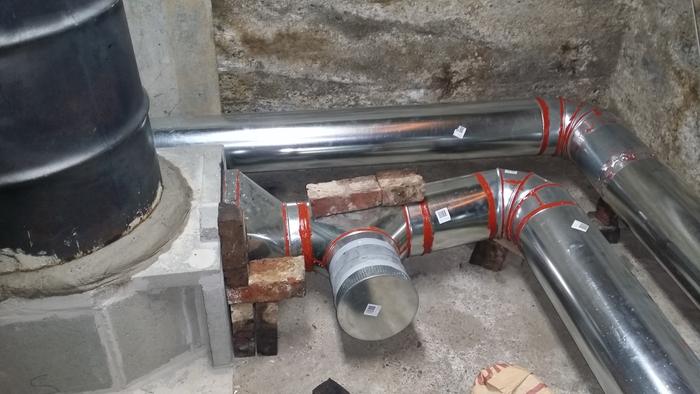 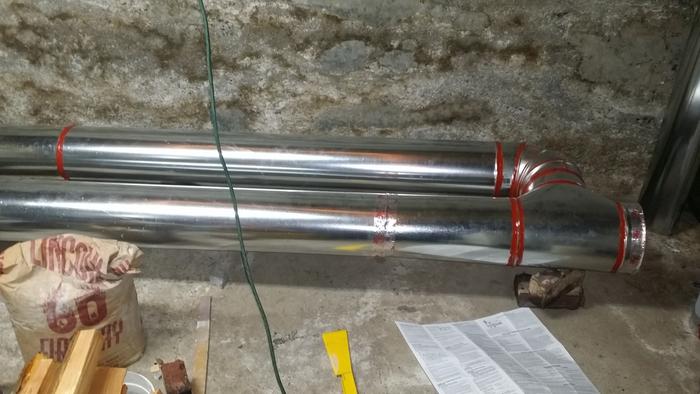 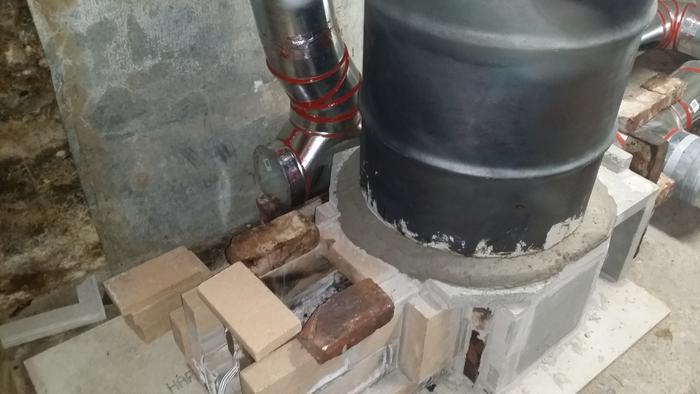 shilo kinarty
Posts: 110
posted 5 years ago
a lot of unnecessary silicon.
Tim Straw
Posts: 9
posted 5 years ago
Everything I've read says be wary of CO leaks .Every seam I could reach is sealed both inside and out .
Roy Hinkley
pollinator
Posts: 344
Location: S. Ontario Canada
25
posted 5 years ago
Sand is fine but use a thin layer of foam board as a thermal break.
Glenn Herbert
gardener

Posts: 3113
Location: Upstate NY, zone 5
152
posted 5 years ago
I would be concerned about foam board anywhere in that sort of totally enclosed system. With the heat confined, it will slowly build up and just might get hot enough to melt or burn the foam. A much safer method would be to put thin brick pieces spaced every 6-8" or so with a layer of cement board on top. This will break the conductive heat loss and allow airflow to carry away excess heat.
Tim Straw
Posts: 9
posted 5 years ago
Thanks Glenn and Roy for your replies. Makes sense to have that thermal break.
So I'll create a thermal break, pile sand on until it just kisses the pipes,then build the thermal battery.
I don't have a enough of brick / rock to do all the thermal battery. What do you think about mixing pea gravel with clay slip to the consistency of concrete and pouring / packing it in. I think that this would be relatively quick and inexpensive.
Any ideas for a quick and inexpensive TB?
Erik Weaver
Posts: 219
Location: S.W. Missouri, Zone 6B
8
posted 5 years ago

Tim Straw wrote:
So I'll create a thermal break, pile sand on until it just kisses the pipes,then build the thermal battery.

The 1/2-inch obviously heats up to the saturation point, and then begins radiating heat, trying to warm the sand.

Tim Straw wrote:
I don't have a enough of brick / rock to do all the thermal battery. What do you think about mixing pea gravel with clay slip to the consistency of concrete and pouring / packing it in. I think that this would be relatively quick and inexpensive.

Good general idea, but way too much water.

It is good to use the clay to pack in around the pea gravel, that will drive out any air gaps (do some packing and tamping as you fill, to better discourage air gaps from forming). But if it is so wet you can actually pour it like concrete, you are using a great deal more water than needed, and that is only going to increase the drying time. I would suggest just using enough water to let the clay and gravel pack nicely.