Robert Hohulin
Posts: 30
1
posted 6 years ago
I've had my RMH up and and running for a few months now and trying to finish up straggler parts of it along the way. I've been experiencing some burn problems though. I started off using hardwood millworker scraps-had phenomenal burns-nothing left but a dusting of ash. Wish I would have had a temp gauge at that time. When that ran out, I used 2x4 scraps split thin-again-complete burns. Then I purchased a 1/2 face cord of black locust. Turned out to be less seasoned than was billed. My bad. Locust should have just about melted the heater, but burn was anemic. Chalked it up to too wet of wood. Picked up a sampling of better seasoned oak, cherry, and locust and had a little better results, but was still not seasoned enough. Am having large amounts of ash left in burn tunnel - maybe 1" after a 6 hour burn. "Seems" to be drawing well - having the "rockety" sound. I'm keeping the system cleaned out and having fine ash on the inside of the barrel, no creasote. Running temps on average of 500-600 on barrel top,400-500 on side. Have had it as high as 750(side) and 850 on top, but not sustained. I'm starting to wonder if its not just the wood I'm using. Last night I had a first-a flame up where the burn creeped up to the top of the feed. Lasted a short time, no strong breezes. It made me wonder if my draw is not as strong as I thought. I feel like I have a solid build, followed the dimensions closely. Using a cast core with 4" thick walls and base on a bed of bricks with a cob buffer. Burn tunnel is 10"(ceiling) long and 7.5 x 7.5, feed is 7.5 x 7.5 x 12, riser is 15 gal barrel with clay,perlite, refractory, 3" thick walls around an 8" duct - 48" tall, 3" riser to barrel top gap, the barrel is offset around the riser to allow for good clearance in the bell, 4-5" to manifold exhaust. No leaks in system. Vertical stack is reaching 100-150 temps. Exited through roof with 2' outside of building. I've been reading that I should be hitting 800-1000 sustained with a clean burn. I'm not sure if I have a problem or if its solely the wood. I'd appreciate any thoughts anyone might have on this! Thanks in advance!
image.jpg 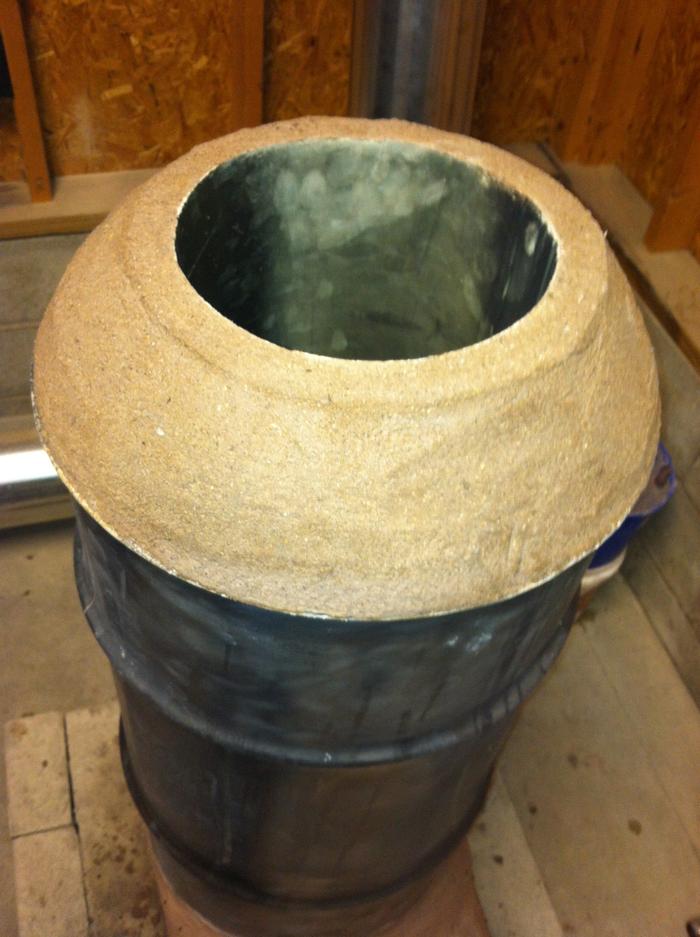 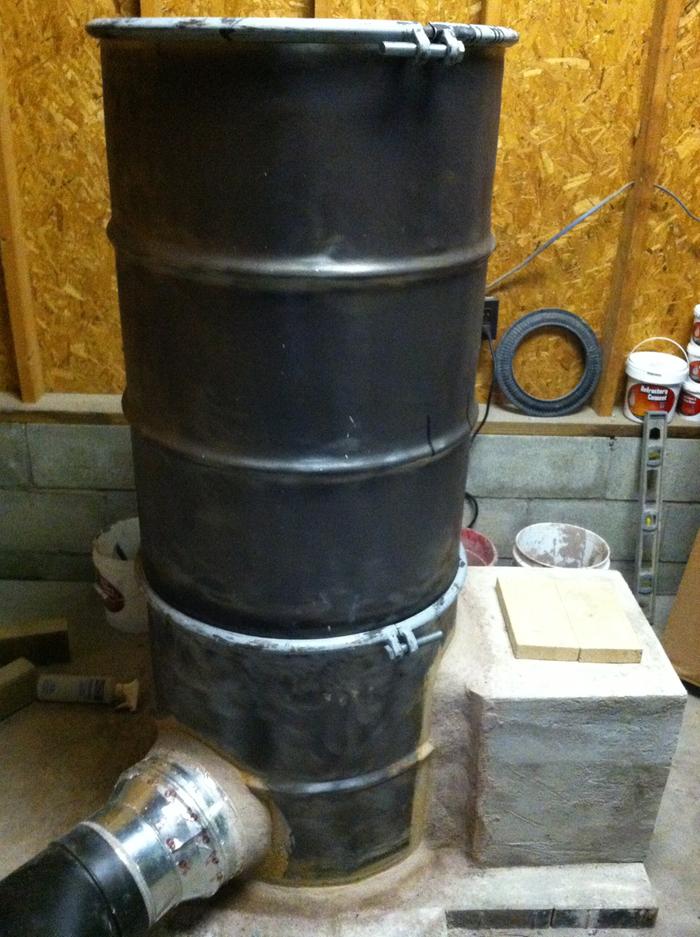 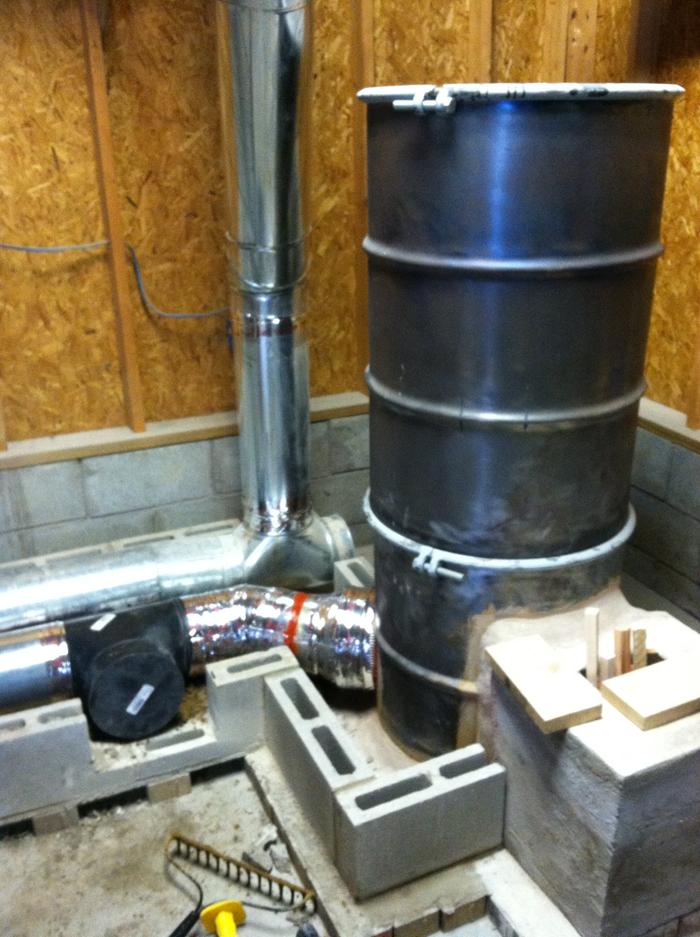 posted 6 years ago
I'm no expert, but as far as I know, the tunnel should be a little longer, and the manifold seems a tad small. If the burn j/tunnel is not insulative, it's stealing heat, concrete and cob will steal heat. The exact opposite with your mass. Too many turns, and even though chimney is not necessary, you may need some rise depending on your climate. I'm going to go with manifold as number one, and then insulate your j. Also check your draft from OUTSIDE. Tale tell way to know if you need a little more rise.

Yea yea, I know the link is for horizontal fees, but dig around for j's

Robert Hohulin
Posts: 30
1
posted 6 years ago
Chad, thanks for your reply. I have an 8" system and am using a 12" exhaust from the barrel reduced to 8". The core is cast from clay, perlite, and refractory 4" thick - top bottom and sides. Do you think I need to wrap that in cob to insulate it further? I was wondering if maybe I need to make the burn tunnel shorter, the reason being the 8" galvanized duct in my riser is warped but still intact after several months of almost daily burning. Shouldn't it be disintegrating by now? Ive kind of wondered if maybe I need to raise my stack by another foot or two. By the way, the pics are older. Here are some more recent pics.
image.jpg 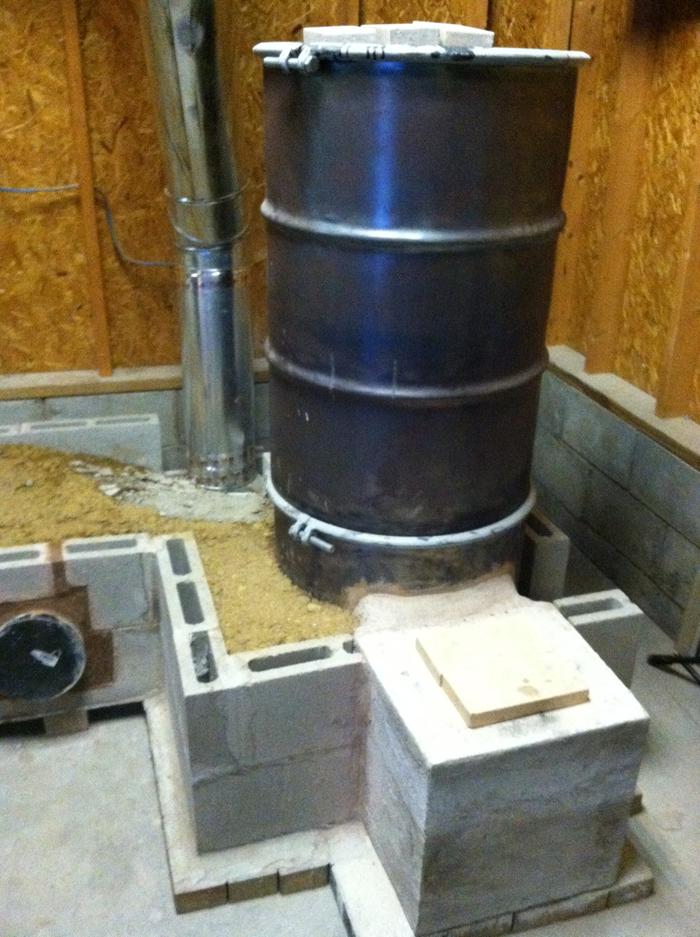 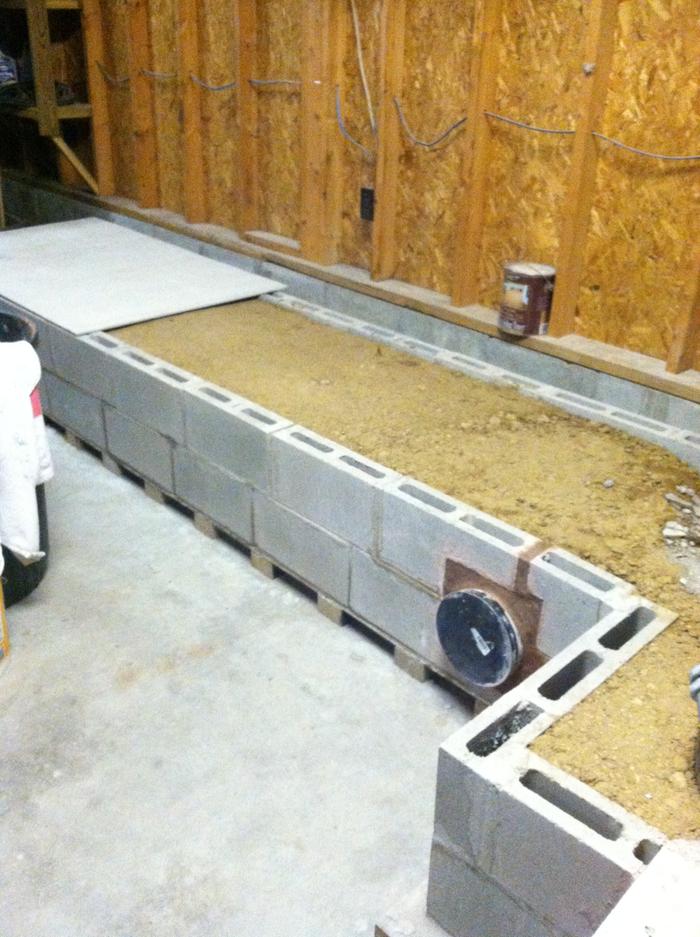 posted 6 years ago
Once again, no expert. But one thing I do know.... no cob on riser your mix sounds okay. That 10 inches sounds like a big hole.... but that's the manifold part I was concerned about... bigger. It's not as big as it sounds. The second concern, to make it clearer, if your burn tube-tunnel is trying to turn into a fire pit, that means it is too comfortable. Too warm, needs a material that refuses, reflects heat, like your riser. Don't take my word on it, wait for someone else to chime in. Remember, warm chases cold. You want to start insulated, and HOT. and once it leaves that riser, make it touch everything it can to suckered that hot up.

I personally think 21 is okay, 18 to 21 is what I like 6 inch to be. I can't emphasize enough, the importance of the difference s between insulative and absorbing materials and where they be long

Rick Frey
Posts: 45
Location: Oakland, CA
2
posted 6 years ago
Robert - Great looking pictures and sharp looking design. I have a similar cast core on a 6" system and have experienced some of the same issues. I'm wondering about how much of the issue really can be attributed to the wood. The different heat I get from different types of wood is amazing. I get some wood that burns so hot so fast, it's a bit scary. I've hit 950 on the top of my barrel with a 5" gap. Other nights I burn and I never get over 450 degrees in five hours of burning. I have yet to be super rigorous in testing the exact wood that produces different results, but it's been clear to me that the exact same heater in basically identical conditions produces radically different results based on the wood I use. Since you've had some great results with your heater (hitting 850 on the barrel top is a pretty good sign of serious heat), and if nothing's changed about your design/set up, it seems like the wood is a great place to do some experimentation.

I'd be curious to hear from other folks their experience with different wood causing a major difference in heat/fire characteristics or if there's something about both our designs that only operates efficiently under ideal wood conditions?

As for the metal duct in your riser still being intact, it's not quite true that metal dissolves instantly in fire. I've got a heavy gauge steel pipe as my riser (with 3" of clay/perlite around it for if/when it fails). Part of why you might not be seeing damage yet is by pouring your core, the first 6" or so of the rising happens in the core and that's where some of the hottest temps are. If your duct is going to fail, you'll see it at the bottom of the riser first. After two months of constant burning, my steel tube had some clear splotching on it, signs of having gotten crazy hot then cooling back down again. If you're not seeing signs of that at all, it probably is a sign that your heater isn't getting as hot as it should be.

In terms of covering the core in cob, cob is thermal mass, not insulation, so it would actually pull heat away from the core rather than keep it in. If you have 4" of material around your burn tube and riser, that's even more than I did, so your core should be barely warm to the touch after 5-6 hours of burning. Poured cores are much better at directing the majority of the heat back into the fire, and again, from your experience of a bunch of successful burns, you've seen it do that consistently.

Two quick things you can do to check internal temps. Drop in an aluminum can and see if it melts/vaporizes pretty quickly. Melting temp for aluminum is 1200 degrees Fahrenheit, so that will give you a sense of getting at least that hot. The next one is dropping in a bit of copper pipe. Melting temp for copper is just under 2000 degrees, so that would be a test to see if you're ever hitting those temps. And, if it's not too hard to do, checking the bottom of your riser for any decay/spalling I think it's called would be one other check.

Robert Hohulin
Posts: 30
1
posted 6 years ago
Actually,the outside of the core gets pretty warm after a 5-6 hour burn. Interesting? Any thoughts? Makes me wonder if I'm getting enough draw.
Glenn Herbert
gardener

Posts: 3575
Location: Upstate NY, zone 5
224
2
posted 6 years ago
You said your chimney goes 2' above the roof. How high is that from the floor, and what part of the roof are you comparing to? Unless it is the peak, or you have a very tall building, you would probably benefit considerably from a few more feet at the top of the chimney.

Building codes vary, but a common one (International Building Code, which New York State uses) requires 2' above the highest roof within 10', and 3' minimum above the roof where it goes through.


The fact that you had super-hot burns from (kiln-dried) millwork scrap, even early on while the mass may still have been drying out, points pretty strongly to the quality and condition of the later wood. Storing some on top of the mass may help dry it better. Try doing that with some and leaving some as is, and use the two batches alternately to see what difference you get. Keeping all the wood under cover (open-air) should give you some great fuel next winter!

Rick Frey wrote:
I'd be curious to hear from other folks their experience with different wood causing a major difference in heat/fire characteristics or if there's something about both our designs that only operates efficiently under ideal wood conditions?

We switched from splitting large split logs (ie split tree trunks), to using branch wood (about 5-7cm/2-3" diameter or smaller) and cannot get the burn box temperature as high. It's burning at around 500deg C instead of 700. So, we get fewer calories, but my husband isn't burning as many himself, splitting the heartwood logs!
We have to buy most of our wood, it's 20€ cheaper per cubic metre of branch wood, and altho we do find we're burning a bit more of it, the cost is still less with 'branch' wood than split logs.

My old man is 70, I'm crap with an axe, so this solution works for us, although I am concerned about the lower burn temperature not giving us an efficient burn.

Posts: 3575
Location: Upstate NY, zone 5
224
2
posted 2 years ago
How dry is the branch wood compared to the split firewood? If it still has bark, that keeps moisture in much longer. Split wood dries faster than round wood of the same bulk. If you can split the larger branch pieces, that would help. There is a tool called a Kindling Cracker originally from Australia that is supposed to make splitting smaller wood safe and easy - you don't swing an axe, just hammer the wood through the cracker.
Graham Chiu
pollinator
Posts: 633
Location: Wellington, New Zealand
15
posted 2 years ago
The kindling cracker is originally from New Zealand, and not Australia. A schoolgirl's science fair project.
lesley verbrugge
pollinator
Posts: 139
Location: 48°N in Normandie, France. USDA 8-9 Koppen Cfb
56
4
I like...

Thanks for taking time to reply to my post.

What you're saying is, that if the wood is bone dry, we shouldn't see a difference in burn efficiency between trunk wood and branch wood?
We love the look of that gadget, but the old man is already groaning at the thought of going back to hours of splitting, so we're looking at setting up more wood storage so the branch wood has longer to dry out here on site

Thanks once again for your input - it's made us think!

Posts: 3575
Location: Upstate NY, zone 5
224
2
posted 2 years ago
If you can make space for two years' worth of wood storage, that would be an ideal solution. Keeping it roofed but ventilated will let it get good and dry.
Peter Sedgwick
pollinator
Posts: 381
Location: Toyoura Hokkaido
134
posted 1 year ago
Super informative post. Thnaks:)