waterwise sunflowers or corn for phytoremediation

Phoebe Weiss
Posts: 2
Location: East Bay, California
posted 5 years ago
I have an area about 10X10' that is contaminated with moderate levels of lead. I'd like to do some phytoremediation.

I'm in California and I'm trying to keep my water use to a minimum. The plants I've seen recommended are sunflowers and corn, which aren't very drought-tolerant. Any recommendations for varieties that use less water or other plants that might do the job?

Bill Bradbury
pollinator
Posts: 684
Location: Richmond, Utah
32
posted 5 years ago
I like the black oil sunflowers, these are available as bird seed. I would also recommend an early season gain like barley. These guys will jump up in early spring and be mature by the heat of summer.
IMG_0384.jpg 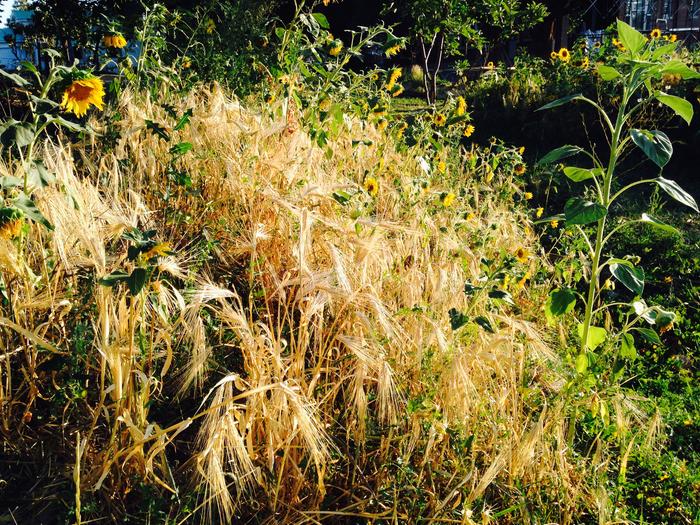 Phoebe Weiss wrote:Barley and fungi sound great! I think my most water-wise solution might be waiting until fall to start planting. The last few years, we've had enough rain in November and December to sustain the garden.

Hopefully you will have a King Stropharia or Oyster mushroom bed that will be fruiting then and digesting all the bio mass that you have grown.

I would recommend starting now. The hugel beds in the photo were created in April and seeded right away; by July when the photo was taken, the barley was mature and the black oil sunflowers were setting seed, but the regular sunflower at the bottom of the hugel is still growing and will continue to grow for another 3-4 weeks before flowering. We don't water the hugels at all and receive 15-17" precipitation annually.

posted 5 years ago
Hybrid poplars have some drought tolerance and build root mass quickly. You will need to control growth of the poplar(s) after first couple of yrs or roots will spread beyond your target area

posted 5 years ago
How sorghum? Lots of biomass, relatively drought resistant.
My understanding is that plants generally don't deposit heavy metals in the seed or fruit, is this correct?