This is near Santa Rosa Plateau in Southern California.

This is a north facing slop that gets plenty of full sun.

Will keep updated with more videos throughout the project. THANK YOU ALL IN ADVANCE FOR YOUR SUGGESTIONS!

Can't wait to dig in!

Vincent Alexander
Posts: 50
1
posted 7 years ago
I'd appreciate any specific design feedback the community has to offer. Surprised this post does not have a bunch of replies already! Curious really...
Dave Burton
steward

posted 7 years ago
How much water does the site receive annually?

How much water typically falls during rain events? Does the site experience massive flood events?

The video is useful, but a map of the site, an aerial view, and contour map would be more helpful. The simplest way of making a swale would be to cut out a half-cylinder ditch and use that exact shape and amount of dirt to make the berm. For example, here is a picture from the Internet that demonstrates this nicely: 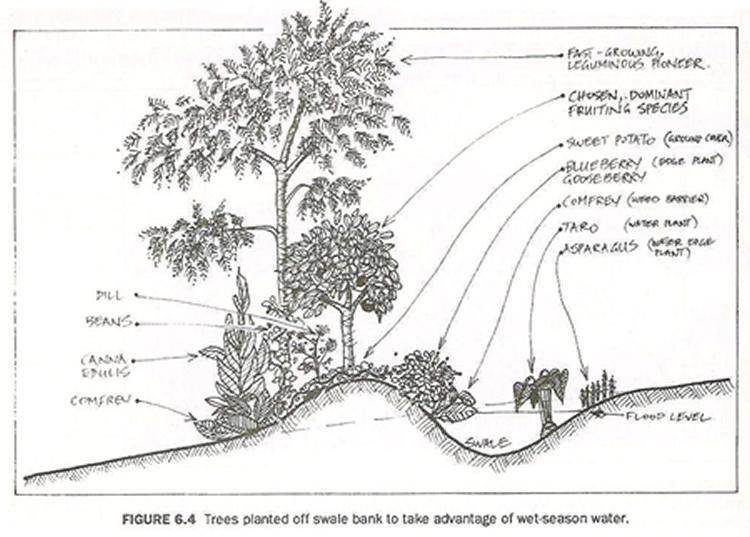 source *see how the flood level follows the course that water normally takes down the site without a swale. When the 'ditch' is dug, that dirt is used to make a berm the same size as the ditch. Now, the water's momentum is decreased, and it can sink into the ground.

Another thing to consider: how many swales are you going to make?

Bill Bradbury
pollinator
Posts: 684
Location: Richmond, Utah
32
posted 7 years ago
Hi Vincent,
This is a tough question because you are on a steep, loose hillside and too much infiltration can destabilize the slope.

Also there is a somewhat intact ecosystem there already that you would do best to minimally disturb.

Since an excavator would do more damage than good, I would probably go in with a ditch witch and hand tools, embedding wood into the slope and building a network of tiny swale/hugels where infiltration can take place and soil can build, but not saturating the soil or even blowing out earthworks in large rain events.

I would start at the top, planting smaller shrubs and bushes in order to gain privacy while maintaining the views, take out all the plastic culverts and plant/mulch heavily into the basins.

Then bring in a mini excavator and apply swale principles to the concrete ditch, ripping it out and shaping the swale as you go back toward the road. Once again planting into the basin, this ain't Australia. The ridge should be reinforced and mulched with stone and planted with hardy, dry lovers.

Good luck!
Peter Ellis
Posts: 1666
Location: Fennville MI
82
posted 7 years ago
It is an interesting project. I am going to describe what I would do, based on the information in your video and a couple of assumptions. The first and most influential assumption is that this is an area that has substantial erosive rain events, but infrequently. I make the assumption based on the existence of the culverts and drainage ditches. The second assumption is that your client has some reason for wanting to capture water in that hillside and that they have reason to believe it will not slide down and cover the driveway if it gets saturated.

Ok, the second assumption is really the big one, because if that is wrong, I would avoid the project entirely. Do not want any responsibility for a mudslide!

But, assuming it won't just slide:

I would not put a swale on the steep slope from the lawn to the driveway. Not one. I would put a swale into the lawn above the culvert. Catch the water high and before it has been concentrated and built up a lot of kinetic energy. Trying to drink from a firehose is difficult, and feeding a concentrated stream of water, with significant head, into a swale is probably going to blow out that swale in short order. That slope looks, from the video (and your apparent difficulty just walking across it), too steep for swales. Lawton has some numbers on what percent of slope is too much, and just by eye, I think that slope is too much.

So, instead of swales, on steep slopes the recommendation is trees in a "net and pan" system. In essence, each tree gets planted in its own basin in the hillside and the basins are all linked together by small ditches. Some of the ditches can be on contour, but they are smaller than swales and holding water is not the idea so much as giving it distributed pathways. I want to do the opposite of what that culvert now does, concentrating the water into a high volume, high velocity erosive stream. Water from the lawn comes over the break at the top of the slope at multiple points after it reaches the spillways on the swale in the lawn. The water is distributed and sheeting at that point. A network of ditches feeding into basins distributed across the face of the slope is plotted and laid out, then dug. I would do all of the digging on the slope by hand. Not confident that an excavator can be used safely on that grade, but the small scale of the ditches and basins does not need an excavator. Crew of half a dozen people with shovels who can follow a string on the ground, probably enough to get all the digging done in one day.
So now, with the net and pan in place, water sheeting over the slope hits the ditches (net) and is guided to the basins (pans) and so it is distributed by the net and slowed at each pan and that happens in a back and forth distribution across the entire face of the slope. The trees planted in the pans sink their roots in to hold the soil. Other plantings, ground covers, flowers, nitrogen fixers get distributed over the slope, because roots hold soil in place and leaves attached to roots pump water out of the soil through transpiration - and because more stuff growing on the slope will look better, too

For the other culvert, with the large watershed and higher drop behind it, I would extend the catch area at the end of that ditch back up the slope, increasing the holding capacity of that catchment. At the low end, I would give it as large a level spillway as I could manage. Again, I want to do the opposite of the current ditch and culvert system. Instead of concentrating into an erosive torrent, I want as passive a flow as possible. Below that spillway the net and pan system diverts and distributes the water, letting it go down the slope in a series of steps, pausing as long as possible in the pans.
Again, the net and pan system would cover the entirety of the slope below the break from the lawn. High on the slope it might be bushes, rather than trees, so they don't interfere with the view.

Something I would recommend against doing is any kind of hugelkultur on that steep a slope. I would be very concerned about the stability of a hugelbeet there.

As for the drainage ditch at the bottom, I would consider taking it out entirely and run the net and pan down to about ten feet from the driveway. Give the last rank of trees some space from the driveway. Let the water have a free run over that last little space to the driveway. And I would go along the edge of the driveway with some macadam (or whatever material the driveway is made from) and on the first foot of the inslope side of the driveway, I would lay down low ridges of the material, maybe an inch high and three inches wide, angled to divert water back into the slope. This way, the water that gets to the drive still gets pushed back into the earth instead of being encouraged to run off and away.