They were looking hard for "bee poison" at Walmart

posted 5 years ago
Just for visual fun before I start ranting, here is a little bee that was sun-warming itself on my shovel handle early yesterday morning: 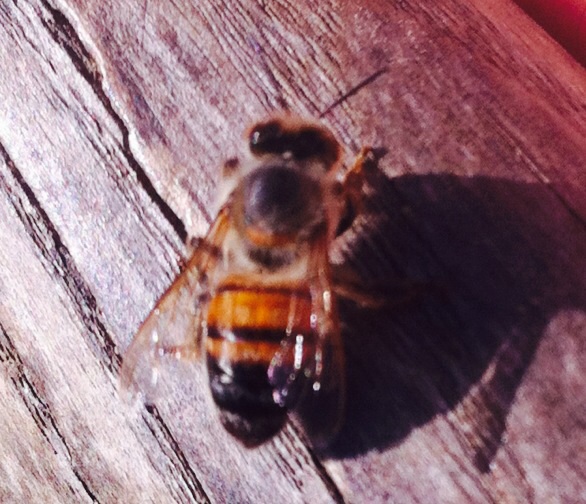 Yesterday I had a dismaying experience at a Walmart. (In this I am doubtless not unique.) As I was passing through the garden section, I saw two women in the insecticides aisle asking an employee "Do you have anything for killing bees?"

Stunned by the sheer stupidity of wanting to poison bees, I loitered and listened for two or three minutes as these women and the fortunately-clueless-about-insecticides Walmart employee started reading labels aloud to each other. I got the impression that the women were specifically concerned about carpenter bees, but not unduly fussy, as long as bee megadeaths would be assured. In any case, they were not succeeding in finding the labeled-as-bee-specific poison they were looking for.

Shaking my head, I went on about my business (which honestly speaking was killing time, waiting for the people I was driving for.) About twenty minutes later, having looked at the outside plants and stuff, I passed back through the garden section and found the same two women STILL READING THE INSECTICIDE LABELS ALOUD to each other! Presumably they had not yet discovered the particular "Death To Bees" product legend they were looking for.

I gave some thought to trying to speak to the women and give them a friendly education on why bee-massacre is such a terrible idea. But they were radiating great gobs of that certain hillbilly truculence that is not stupidity but has many of the same effects. It's hard to describe but impossible to mistake once you are familiar with it, so I knew I'd be wasting my effort and breath. Plus I am discouraged by those who love me from speaking passionately to strangers, because I have a big outdoor voice (even when indoors) that sometimes (I am told) makes people who don't know me think I'm getting angry, at the stage in the conversation where I'm actually just beginning to reveal hints of my mild enthusiasm. So I kept my own counsel, held my tongue, and left the women still searching (hopefully without success) for their bee-specific poison.

The funny thing was that when I got back to the car, my spouse (who is fearful of bees, possibly allergic, and a leading advocate of me hushing my mouth in public) and her sister were more outraged by this tale than even I had been while experiencing it. I got a chorus of "You should have told them!" and "If I'd been there I would have tried to explain why we don't kill bees" and "They need to be educated" and similar music to warm my ears as we began the drive home.

Kelly Smith
Posts: 724
Location: In a rain shadow - Fremont County, Southern CO
21
posted 5 years ago
sounds like you were shopping at my local walmart....

Derek Brewer
Posts: 118
Location: Hatfield, PA
2
posted 5 years ago
So, how would you handle carpenter bees in, say, your deck? In an ethical manner, as opposed to beemageddon?
Dan Boone
gardener

posted 5 years ago
Sufficient unto the day are the evils thereof. I'm lucky not to have that problem (or a deck for that matter).

Derek Brewer wrote:So, how would you handle carpenter bees in, say, your deck? In an ethical manner, as opposed to beemageddon?

For what it's worth, carpenter bees won't structurally damage a deck. Seems like they would, putting all those big ol' holes, but they don't. So just ignoring it is, from the deck's perspective, a fine approach. You have a deadly allergy or something, maybe that's a different story, but for the deck itself, there's no real problem.

(Carpenter ants on the other hand, can make it fall down. But they're symptomatic of a moisture problem; they don't strike randomly.)

posted 5 years ago
Mike, that was my understanding about carpenter bees as well. But it's third-hand "knowledge" for me (not experience) so I didn't want to say it.

posted 5 years ago
I had a similar encounter with my landlady yesterday who was moaning that guests were interfering with her veg patch and watering it with god knows what.

I didn't understand it either but then she says " Don't they realise I am trying to be organic" whilst simultaneously spaying the borders with round up.

I don't know if we can blame them to be honest. We might have had our eyes opened by some experience in the past that has led us on an endless search to make the world a better place but the majority of people have not experienced that epiphany moment yet so they go through life thinking everything in the world is OK. They haven't made the connection between bees and the rest of the planet.

I have these moments of disbelief on a regular basis. Whenever I see people digging every year at the allotment I want to shout WTF are you doing that for or when I see people bagging up leaves from the lawn, putting them out with the trash and then driving to the store to buy compost I want to slap them across the face. I have tried telling them but I probably come across as some evangelical nutjob so now I just show them by tending my plot in a way that I think is right and hopefully a few people will see what I am doing and start asking questions. I am also thinking of starting a leaf clearing business in the Autumn so I can get paid to take away all that lovely organic matter for my compost.

If you are interested in Self Reliance, Frugal Living, Gardening and becoming Debt Free, follow my Blog

Paul Andrews wrote:We might have had our eyes opened by some experience in the past that has led us on an endless search to make the world a better place but the majority of people have not experienced that epiphany moment yet so they go through life thinking everything in the world is OK. They haven't made the connection between bees and the rest of the planet.

I don't really include myself in the "endless search to make the world a better place" category, although I realize that there's a "permaculture-as-a-movement" wing just like there's a "permaculture-grows-me-better-food" wing and a "permaculture-enhances-my-economic-independence" wing. My contempt for ignorant bee-slaying is justifiable, I think, because any literate adult these days should be aware (a) that bees are under threat and (b) that our whole food system depends on them. I'd put bee-poisoning in the same basic category as dumping your used motor oil into the stormwater drain at the bottom of your driveway. "I didn't figure it would hurt anything" is not an acceptable excuse even if the perpetrator really is that stupid and ignorant, because there's no acceptable excuse for an adult in these times to be that stupid and ignorant.

Shannon Sheridan
Posts: 15
Location: Michigan
2
posted 5 years ago
This is exactly why I quit shopping at Walmart a couple years ago, when I was eliminating things from my life that pissed me off. Google news was the other thing. Two years without Walmart, one year without Google news, and I am in a way better place

Carpenter bees: LOVE!!! Ours just arrived a week ago, in all their bumble-y glory. They bore holes in the door frame of the garage, we stand by and watch them kicking the tiny frass (wood shavings) out of their burrows. I was assured by an entomologist that they were unlikely to do structural damage, and they absolutely do not sting or bite. They're so big my son calls them hummingbees.

We just love it when they position themselves at eye level and hover there, looking straight in our face.....like they're trying to communicate something. Ours are practically pets! The idea of killing them is appalling. When visitors comment on them, we say, "don't worry, they're carpenter bees. They work here."

posted 5 years ago
They're amazing. Just about perfect circles about 1/2" in diameter and can bore them lengthwise through a 3/4" board leaving 1/8" on either side and they stay right on center. They can't fly but don't tell them that.

Hester Winterbourne
Posts: 406
Location: West Midlands UK (zone 8b) Rainfall 26"
89
posted 5 years ago
Here is a happy bee in my home made bee house. I think I also would have said something to the women. Earlier this year, I found a bumble bee on the lawn with such a bad infestation of mites she couldn't fly. I dunked her in the pond until she was too wet to protest (I did hope at first this would float the mites off), fed her honey to prevent hypothermia, then spent some time pulling them off with tweezers. She flew off in the end. I like bees!
bee.jpg
Tracy Kuykendall
Posts: 165
2
posted 5 years ago
The best way to convince someone that you have the answer to their problem is to listen to what they have to say.
Tracy Kuykendall
Posts: 165
2
posted 5 years ago
Another little nugget; no one cares how much you know-until they know how much you care.
Joe Wamsley
Posts: 26
1
posted 4 years ago

Paul Andrews wrote:
when I see people bagging up leaves from the lawn, putting them out with the trash and then driving to the store to buy compost I want to slap them across the face.

Paul, you should take their leaves then try to sell them to them next year. Just undercut the store and deliver, it'd probably be pretty easy.