I have a couple of questions about the selection of a heating project for my home.

We are currently doing a reconversion project on a barn. I know a little about passive solar and the barn is facing south so I have made about 7% solar glazing on that side.

We live on an island in the Mediterranean just off the coast of Spain called Mallorca so it doesnt really get very cold here. We have about two to three months of cold, here is some data:

We will be moving in this autumn and the outside wont be insulated yet so we need a heating source. We would really like to make an RMH but wonder if its a bit overkill in this climate and seeing as it will only probably be used for three moths a year. There are a couple of factors though.

Here you can see a video of a walk around of the house:


The main living area has very high ceilings, around 5 metres (16 feet) which makes me think that the RMH would be a good solution because of its radiator effect.

In the attached pictures I have located the place where I would like the RMH to go and the bench next to it. The pipe would go out the wall on the same side as the barrel. I have thought about a 6 inch system simply because the 8 inch seems a little overkill.

I personally would have run the bench all the way along the west wall but my wife is convinced that the bench will never be as comfortable as a sofa....no matter how many pictures and videos of people snuggled up on an RMH (looking like they are in heaven) I show her.. so that is the happy medium that we have agreed on.

I would really appreciate your thoughts and comments.

A little bit on our house and project:

Its a retro fit of a barn that has never been lived in by humans. We are self building pushed mainly by cost and wanting to use more natural materials i.e lime etc. The problem over here is that anything that has the "natural" or "eco" label attached to it, costs 3 to 5 times more than conventional rubbish.

So we have done an insulate floor slab (1 inch cork insulation under the slab) made out of hydraulic lime.

No septic. Because we were building from scratch we have separated the grey water plumbing from the black water piping and will be using a composting toilet "a la" loveable loo.

We have used lime for all of the plastering, mainly because the material of the walls is sandstone and soaks up water like a sponge. We also started with lime and then didnt want to faf about experimenting with earth even though we have done an earthen plaster course with Bill and Athena Steen from the Canelo project. When you got a lot to do and want to get in certain things get put on the back burner.
Canelo Project

I have also done two PDC's (one as a translator) and a bunch of courses on PRV, Organic agriculture, Holistic Management etc. We have 2.6 hectares and are thinking about doing a small organic egg production and probably some broilers "a la" Joel Salatin. We have an area set out (1 acre) for food forest and I have already planted 4 mulberry trees for the chickens.

If you are interested you can see more about our project here:
http://canmandala.com/

but will be updating on a more regular basis once we are in. First things first.

Thanks for your help!

Edited by moderator to embed video

Posts: 3356
Location: Southern alps, on the French side of the french /italian border 5000ft elevation
169
posted 5 years ago
Well, with the temps you're showing, i think your house mass would give enough flywheel.

A 4" to 6 inch batch rocket, in a tower shape. May be a brick bell and a barrel (metal radiator) Use the mass of the adjacent wall to store some heat. Benches take a lot of space imho. I let you do your research.

I see you live in the French Alps. I lived in CHamonix for 5 years.

Thanks for your input.

Looking at that temperature chart the temps in my are get lower than that. We had -5 C in March one morning but it goes up quickly to 15 -20 degrees if the sun is out. which in the "med" it normally is.

I have looked into the batch rocket a little bit but am finding it hard to find any more info. Do you have any links?

I also think that the bench on the RMH takes up a lot of space and have been thinking about just installing a pocket rocket but feel its a bit of a waste as most of the heat will go up the chimney.

The bench would fit fin in that space though and I think that with my temperatures and a well insulated house, with an rmh i probably wont have to light it much more than once a day for a while, with a pocket rocket, not so.

With the bench laid out where it is would you go straight out the wall on the west with the chimney pipe or, I was thinking of taking it up the corner and then out the west wall before it hit the roof.

I dont really want to punch a hole in the roof as its nice and dry in there at the moment and I dont want to risk having water come in this winter.

Next summer we will be redoing the roof, putting up insulation and renewing the waterproofing so that would be the time to put a howl in the ceiling.


Here is a sketchup image of what i had in mind. Its just to give you a general idea.
Wadda you think? 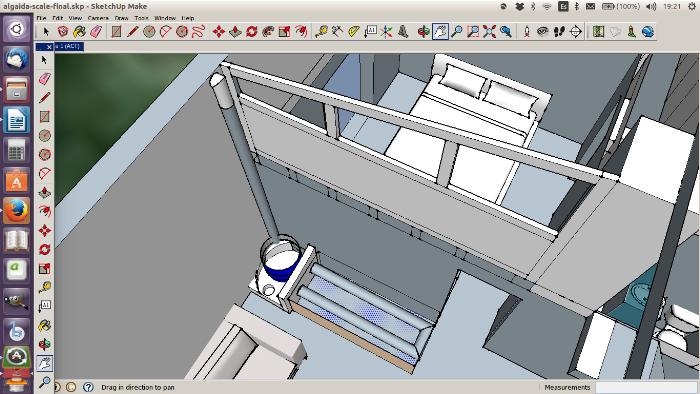 Luke Smith
Posts: 20
3
posted 5 years ago
So, some measurements would be:

just under 5 metres (16.4 feet) from the barrel through the bench and to the 90 at the base of the wall.

Would it be better to run the pipe straight outside at ground level and then straight up outside past the eves and up past the roof or would it be fine inside? 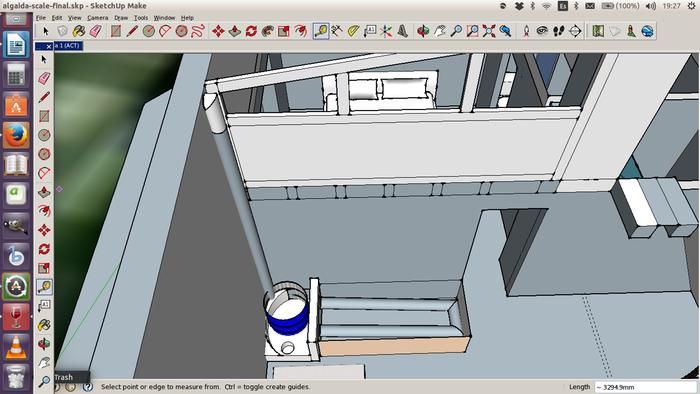 Posts: 3356
Location: Southern alps, on the French side of the french /italian border 5000ft elevation
169
posted 5 years ago
Luke, look for batch rocket on google may be. Or rocket 177. And read this whole thread http://donkey32.proboards.com/thread/511/adventures-horizontal-feed

Usualy the batch gets coupled with a bell, which doesn't take as much space as a normal bench.

Luke Smith
Posts: 20
3
posted 5 years ago
Will do! thanks for the info.