posted 5 years ago
This thread is where i will chart progress as i apply Actively aerated compost tea to a diseased peach tree.

Story:
Hello everyone, i have recently moved into my very own place on .5 acres. It is always hectic getting all the projects rolling at once, but i am finally getting things partially settled. The land used to be a horse pasture and peach orchard years ago, but has been maintined as a bermuda lawn since. On the lawn is one remenant peach tree that the previous owner planted from a pit he found in the old orchard area. I was excited to get at least a few fruit trees already grown and going strong, unfortunatley this peach tree had bad orange oozing blisters on the main branches. Since then the ripening peaches all either turned brown or started getting little crystals forming on wounds.


I always start by aerating the water before adding ingredients, with this airlift design the dissolved oxygen increases exponentially until it is supersaturated. With water alone a strong vortex is created which increases the surface area substantially. Down the center of the tank you can see a line of bubbles all the way down to the outlet.

Here is a few initial pictures of the tree. 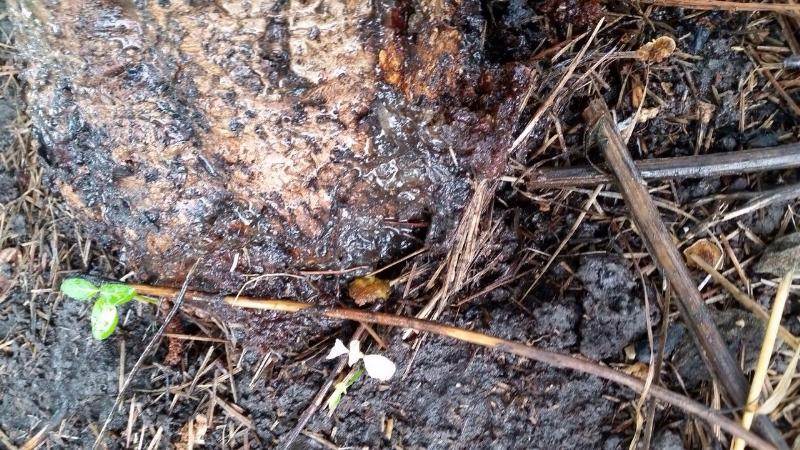 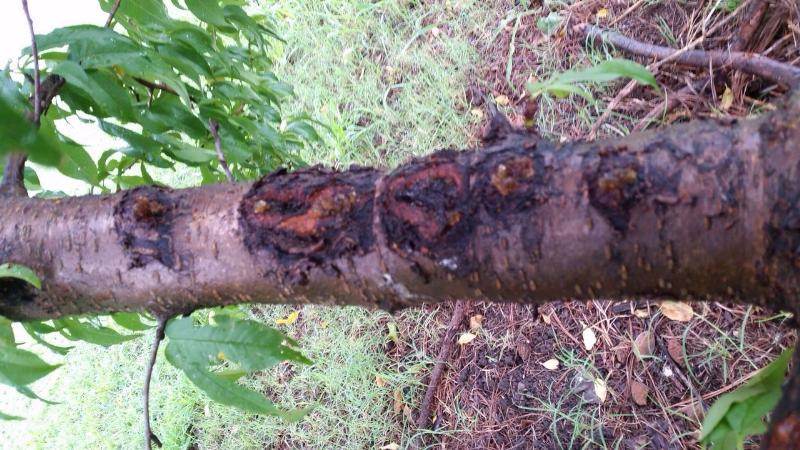 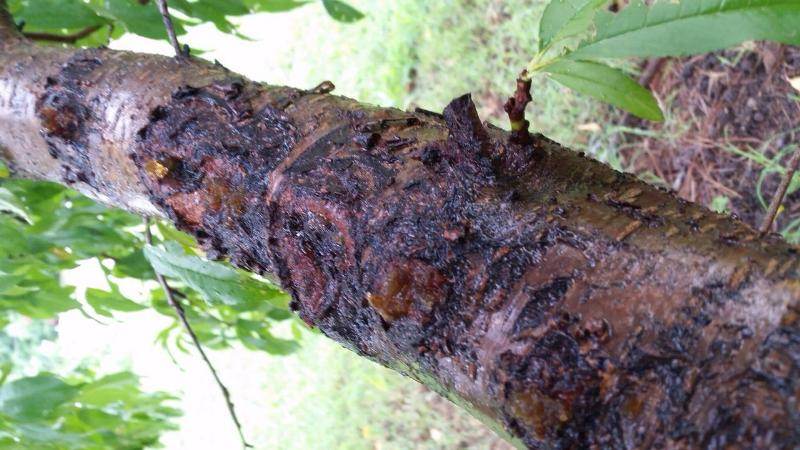 My recipe for brewing tea is just worm castings and molasses.
Brewed for 24-36 hours. In the first 12 i see a major explosion of bacteria, then as things progress throughout the remaining time i am seeing other larger organisms populating the tea and eating bacteria.

My method for application has been pouring the tea directly in the wounds and using a sprayer to get a majority of the leaves sprayed.

Edited by moderator to embed video

posted 5 years ago
Here are some photos after the 3rd application. No pics after second because i applied the tea at dusk and didn't take photos. 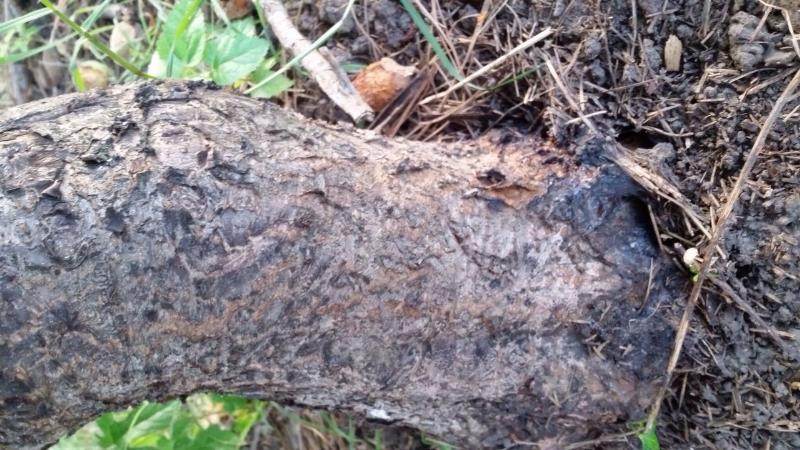 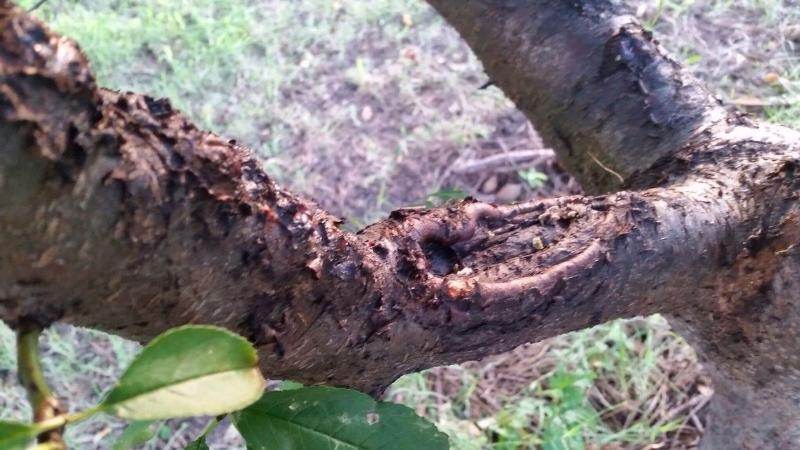 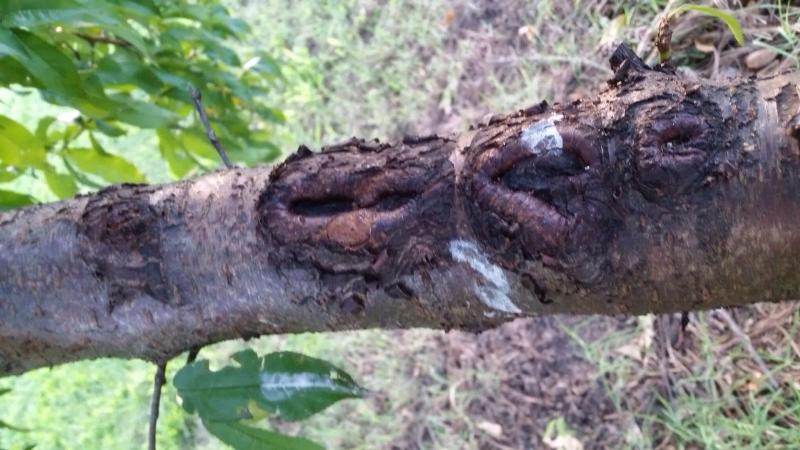 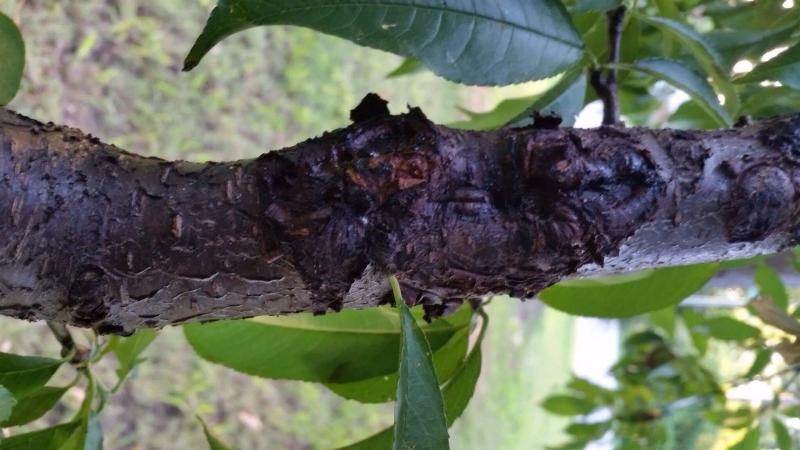 Observations: it appears all the orange stuff is gone, things look less slimy.
Before application 1 the tree had a ton of ripening fruit, but slowly each piece would get a brown spot that had a clear crystal growing from the center. After application 2 i noticed the fruit was all dropping off the tree more rapidly and there was some new vegetative growth at the branch ends, after application 3 any fruit left looked shriveled.

posted 5 years ago
Excellent project! that orange, slimy stuff is a sap fungus which your tea is eradicating. Good Work!
The wounds appear to be improperly cut off branches, cut off through the collar instead of leaving the collar intact.
This is a common error by people who don't know how to prune a tree properly and the fungus you found is one resultant issue from bad pruning practices.

The last photos show great healing beginning, the new callouses forming appear to be fungus free. The tree should set good fruit next season if you continue the treatments this year.
Keep up the project, I look forward to seeing the photos of the wounds healed up and calloused over as they should.

You might look into helping this tree further by adding some mineral rich watering for the root system.

posted 5 years ago
Hey bryant Thanks for the kind word. I have done one more treatment and noticed there was a tiny speck of orange before i applied the tea. So i decided to take your advice and give the tree a watering. The only available minerals i had on hand were some diatomaceous earth, so i watered some of that in around the trunk and pretty much under the entire canopy. I hear it has trace minerals, but i don't know if thats enough.
Is there a better set of minerals i should look into getting?

Im excited seeing this tree healing itself. I noticed that where the shriveled fruit is still attached on some branches the leaves directly around the fruit have died and dried out. It seems like the tree is withdrawing energy from those old infected areas and putting out new growth elsewhere. Ill keep you posted.
Bryant RedHawk
gardener

posted 5 years ago
The best mineral additive I have found is called Sea-90 available from Seaagri.com or from one of their distributors in your area. This stuff is amazing, 90+ minerals from seawater, doesn't take much, about half a cup per tree once a year for three years and fantastic results. You can even use this stuff as a seasoning since it is a very complete sea salt. I was dumbfounded at first, but through experimentation I have become a fan of this stuff. I did a lot of research into it prior to starting use and the science is sound for using sea salts as a mineral additive.

Bryant RedHawk wrote:The best mineral additive I have found is called Sea-90 available from Seaagri.com or from one of their distributors in your area. This stuff is amazing, 90+ minerals from seawater, doesn't take much, about half a cup per tree once a year for three years and fantastic results. You can even use this stuff as a seasoning since it is a very complete sea salt. I was dumbfounded at first, but through experimentation I have become a fan of this stuff. I did a lot of research into it prior to starting use and the science is sound for using sea salts as a mineral additive.

I have to agree with Bryant about Sea-90. In fact the results from using Sea-90 is what completely convinced me to abandon "factory farm methods". I try to manage the production and bailing of all the hay that my mother needs for an 80 head dairy operation. I also have a day job which makes the hay job very challenging on my family and I. ANYWAY - The first year (2014) I did folar feeding by dissolving Sea-90 and spraying it at 8 pounds per acer. Due to some use of other "yield boosting" stunts I could not say that the sea mineral increased hay yield any. The surprising results came when we started feeding the hay to the milk cows.

To put this in context I want to stress that my mother and 2 of her sisters started in the dairy business in 1952, 1977, and 1978 respectively. All three farms struggled at getting near the minimum butterfat and protein requirements to receive added bonus prices for their milk. Every thing was tried from selective artificial cattle breeding (AI) and manipulating the feed. Nothing worked consistently nor for very long. Somatic Cell Count (SCC) in the milk is an indication of heard health. High SCC used to be a constant worry for my mother's operation. Within 72 hours of feeding the sea mineral treated hay, milk tank test for butterfat and protein met minimum requirements for the bonus checks and far exceeded those requirements for over 120 days in a row. SCC numbers dropped dramatically. Losses due to heard health issues were cut to near zero which alone covered the cost charged to the SEA-90 experiment. All of those stats returned to status quote when the cows went of hay to pasture grass not treated with sea mineral. the pastures are the jurisdiction of my sister and brother-in-law who still insist on commercial fertilizer and weed spray.

For 2015 my mother and I agreed to up the usage of SEA-90 to dry broadcasting 50 pound per acer which was started in December 2014. After watching a few Geoff Lawton videos we decided to forgo commercial weed spray and fertilizers on all the areas that I manage. We also included pasture and hay field aeration which also contributed to our success this year. That is something that has not been done on my areas ever. Keep in mind that 2014 hay production results were very good. So far 2015 results are essentially double over 2014. The family and I are besides ourselves, my mother giggles every time I call in results, the hay hauling crew is stunned, and the local critics are shuddering. This includes my know-it-all sister, my know-it-all brother-in-law, and my uncle the veterinary who basically called me a "Kook" for even considering this in 2014. Trust me on this, shutting those people up is almost as remarkable as the hay production results!

Bryant is right. Sea-90 is something you want to try.

Since we are both in NE OK let's try to meet up. I will try to send you a purple moo-gram or whatever it is. 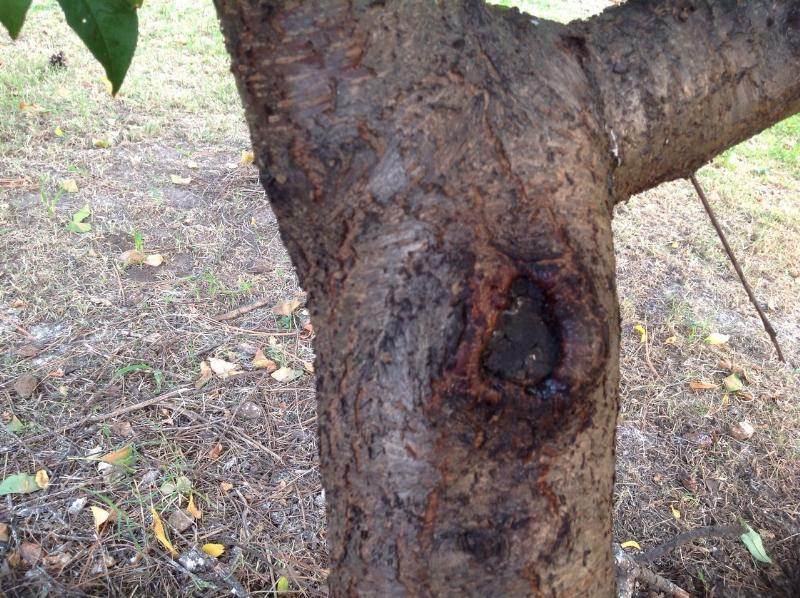 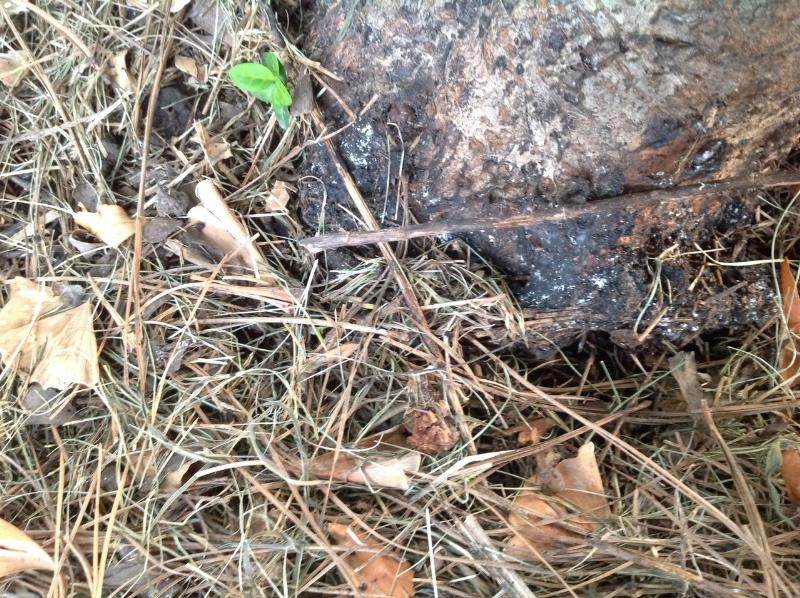 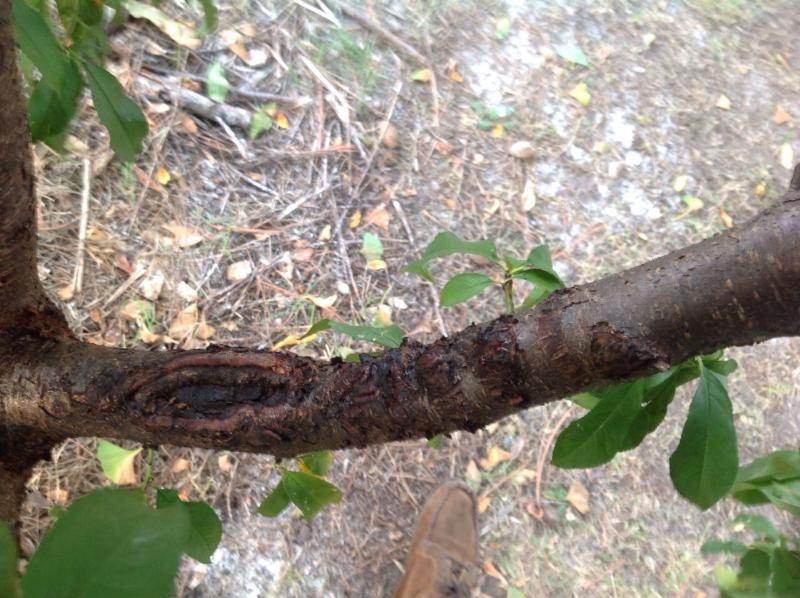 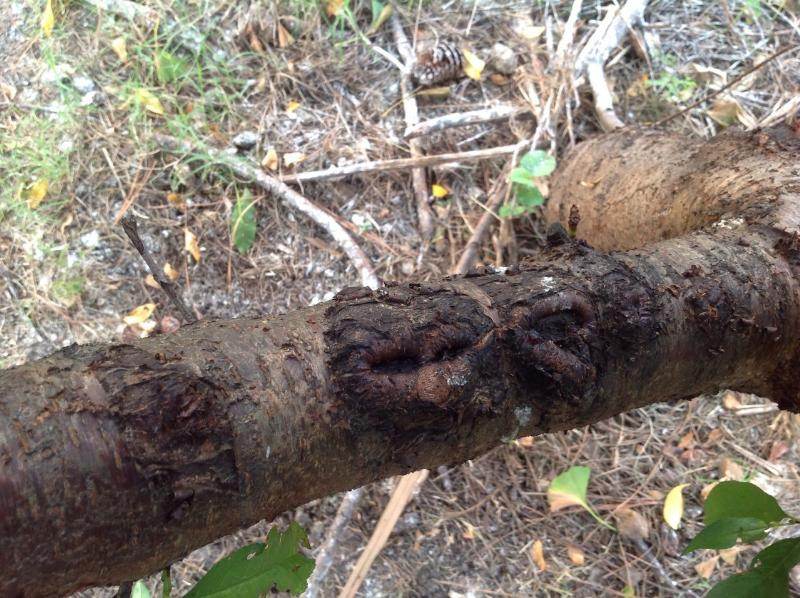 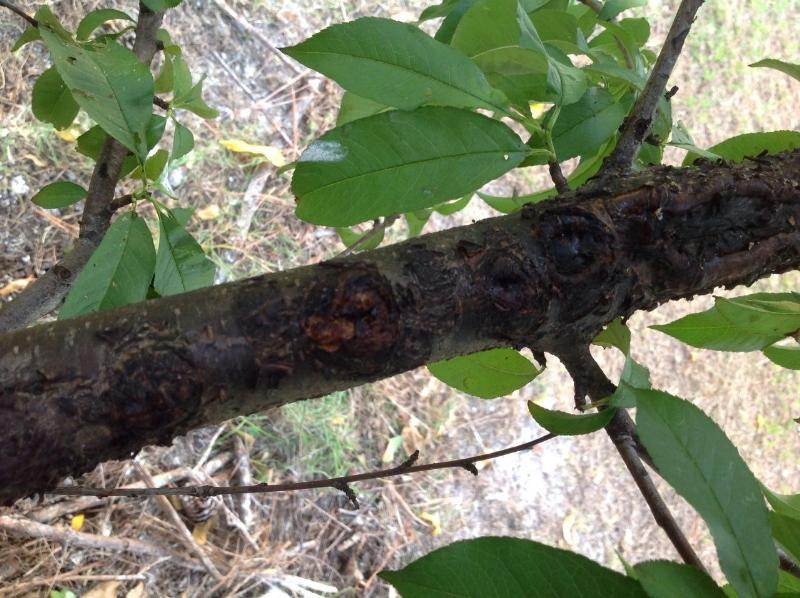 Eveything is looking ok. On some spots you can see there is a ridge of active growth around the wounds. Any specs of orange have turned darker and i poked one and it was hard rather than gooey like it usually is.

posted 5 years ago
Also anyone know what this is? Found on the same tree. 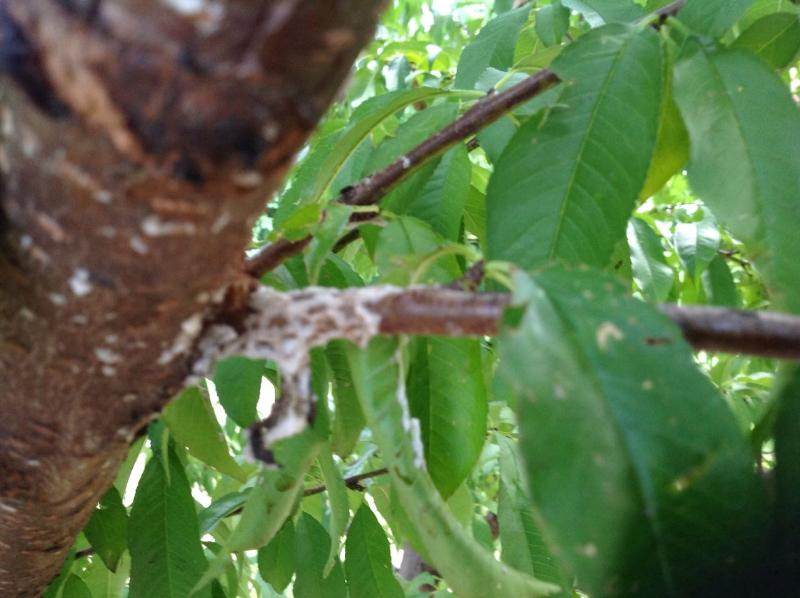 Looks like frosting but did not just easily come off when scraped with a stick.
Bryant RedHawk
gardener

posted 5 years ago
That looks a lot like a new fungus. I'll see if I can find any that grow in that pattern. If you could get a closer, clearer photo that would help a lot as I go through my books. 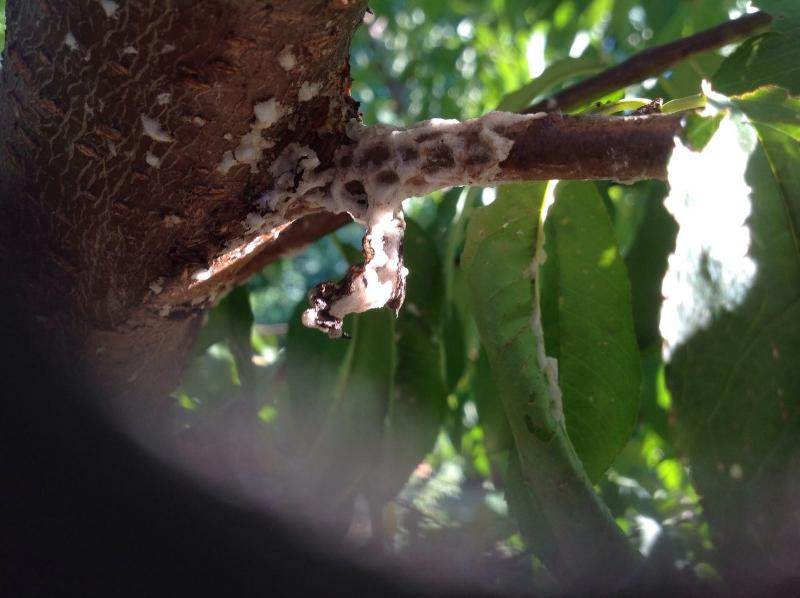 Whatever it is it does not respond to the tea as much as the orange stuff.
Kittum Daniel
Posts: 40
Location: NE Oklahoma
I like...

posted 5 years ago
Do you think it could be some sort of sap coming out of the tree? I have no idea what peach tree sap looks like,
Bryant RedHawk
gardener

posted 5 years ago
I have not found anything common to peach trees that looks like that particular fungi.
It is most assuredly a fungi, so if you mix up a 50:50 solution of bleach and purified water and spray this on the affected areas, it should kill the bugger.
Once you have that particular one under control or eradicated, it is time to inspect every branch at each joint and bud site. if you see any abnormal discoloration, treat it with the above spray.
There are many fungi that like to overwinter in bark creveses so be sure to inspect every one you can.
If you have to, removal of the infected branch and removal will keep the disease from spreading or making a comeback. This pruning should be done at the height of summer but definitely before leaf fall.
Hope this info helps you out.