I'm attempting to help people in the city create inexpensive raised beds for gardening. In town they have a lot of neighborhood code enforcement, that means building a hugel and broadcasting seed across it won't fly, they don't really like 'inventive' ways of recycling random things into raised beds either. If someone does some open lot gardening where everyone can see it, it has to roughly fit the cultural norm of gardening and landscaping. (The city IS good about selling vacant lots cheap for the purpose of gardening.) Our area has a shallow topsoil (if any where houses have been built) and the subsoil is a very dense alkaline clay. It is the type of clay that if you dig a slab with a spade you would almost think it's a traditional brick ready for firing.

Compressed earth blocks used as the wall of a raised bed, the soil in contact with the block will (should) always be moist. The block will be exposed to rain and possibly water from irrigation. We average around 38 inches per year of rainfall. We are in a 5b-6a zone so we have a lot of freezing and thawing in late fall and early spring. From what I have read these conditions would break down cob bricks used for raised bed walls rather quickly. I have read where people said compressed earth blocks with 10% Portland cement holds up well to the rain and wet, but there wasn't much I could find on freeze and thawing effects on the brick other than there were "some losses".

I thought if we have this clay that can be dug out right where the raised bed will be, why not try making compressed earth blocks from it? The bed would benefit greatly from a 'double dug' type operation to remove the clay. The hole can be filled in to make a sunken hugel type bed. The compressed earth blocks I hope will hold up much longer than wood plank sides, would be a bit more friendly than poured cement or cement block, and being blocks could be moved to a new spot if need be. The end result being a place to grow food that code enforcement will allow, is still inexpensive in order to make it accessible to more people, and would be a bit more permaculture than what is being done currently. If more people did beds like this, maybe it would educate even more people to a point where all out hugel beds and such were acceptable things in the landscape. I'm just not sure on the longevity of the compressed earth blocks in our climate.

Hi Chris, We built our house from compressed earth bricks not stabilised in 1988 and put the left over bricks in a stack to see what would happen in the weather. We get 40C+ in summer to -5C in winter with about 300 - 450 mm rain per year. The bricks have weathered well and remain intact but they are very soft any time after rain. Because of their density water cannot penetrate more than about 25mm (1 inch) so frost or freezing is not an issue. Portland cement can react with the clay particulates, depending on what the clay base is to make a stronger brick but you still have the issue of water ingress and freezing which can cause cleaving. If you want to go down this path, I suggest you incorporate chopped straw into the mix and add a plasticiser (Not very good because it is a petrochemical but inert once dry). Rather than use bricks, build up layers of cob and hand mould walls then let dry. After that use a cement wash to seal the inside surface of the garden bed which is where the real moisture problem will arise. Remember also that cement gives off CO2 as it cures so contributes to the Green house gas. Mitigate this by planting a tree or 2 If all else fails use straw bails broken up to create a lasagne garden about 8 inches high at first so as to not draw attention then over successive crop rotations build it up and out. A mix of flowers for the aesthetics for the naysayers combined with vegetables and aromatic herbs will achieve the aim and minimise interference. Good luck with it all Looking forward to seeing or hearing about the end result
Happy gardening
Paul from down under

Failure is a stepping stone to success. Failing is not quitting - Stopping trying is

posted 5 years ago
Here are some, 10% Portland, after one winter. The ones on the bottom, touching the concrete pad, staying wet, are the worst. Even one course up, they're much better.

We're in Michigan, so close, winter-wise. 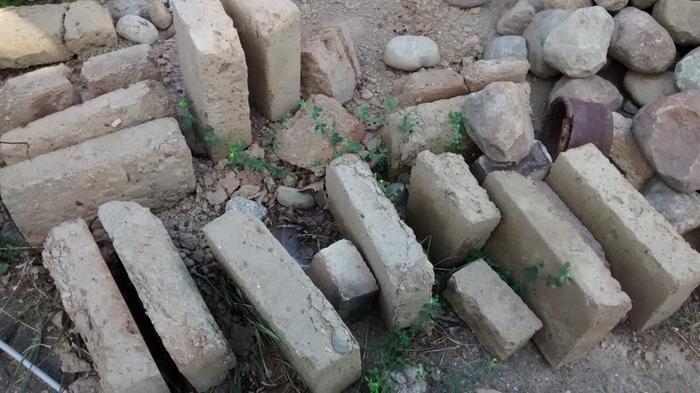 Mike Cantrell wrote:Here are some, 10% Portland, after one winter. The ones on the bottom, touching the concrete pad, staying wet, are the worst. Even one course up, they're much better.

We're in Michigan, so close, winter-wise.

I wonder if there could be a way to water seal the bricks. Like putting grout over the finished wall or painting with linseed oil.