My idea is to use the electric saw mill to make a notch on each side of the logs so they fit tight together. If you cut in about 2 inches the cut at right angles is about 4 inches making the thickness at the lap about 8 inches at the lap with a 12 inch log. This improves thermal stability and nearly eliminate infiltration. Vertical logs could be used for front midle and back walls. Horizontal logs could be placed atop gradually increasing taler logs to make an arched roof. This would greatly simplify the building process.

I will try to get sketchup to cooperate and illustrate this in a later post.

Rick Howd
Posts: 132
Location: McMinnville Oregon
6
posted 6 years ago
Shiplap is great, though I prefer t&g (2") or double t&g (3") if I'm in control of the build (and costs aren't an issue). Shiplap is perfect if the structure isn't as straight/square as would be ideal, like a wofati. It works well on curved structures and if you're packing the gap, but it must rest on the edges or you're better off just buying #2 kd and tacking it together.

I put together some more sketch up views to explain the idea. They are kind of shaky but I will put them up.

</td></tr><tr><td >From Ship Lap Log Wofati</td></tr></table>
Outline of earth fill and roof over wofati and water storage
I tried to post full size pictures but they are coming out as broken links.
https://lh3.googleusercontent.com/-BsU6w8PO0xM/VnBgqlEHE2I/AAAAAAAAA50/ySSymOeNo1o/s128-Ic42/ShipLapLogWofati%252520waterRoof.jpg
<table ><tr><td> 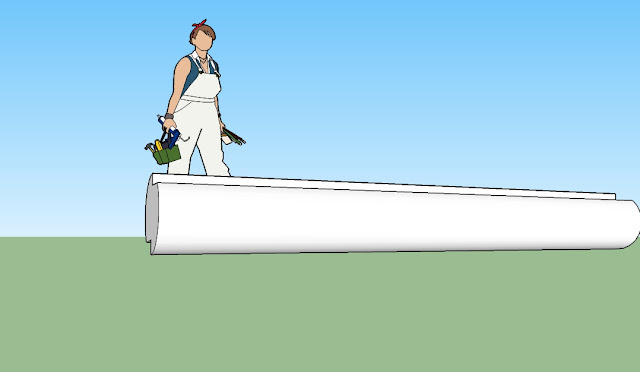 I'm interested (immediately excited) in the duration benefits, construction benefits, and moisture guiding techniques used in the ship lap method you are promoting.

Also, maybe a hand drawn plan and section would convey the idea further.?

posted 6 years ago
I will try again to attach some views of my design. First I pulled out a 16' arch 16' long. Whether 12" logs can carry the soil load I am not sure; if not it could be shortened. This file doesn't show the end logs which would be vertical under each horizontal log.
Filename: 16-log-arch.skp
File size: 257 Kbytes 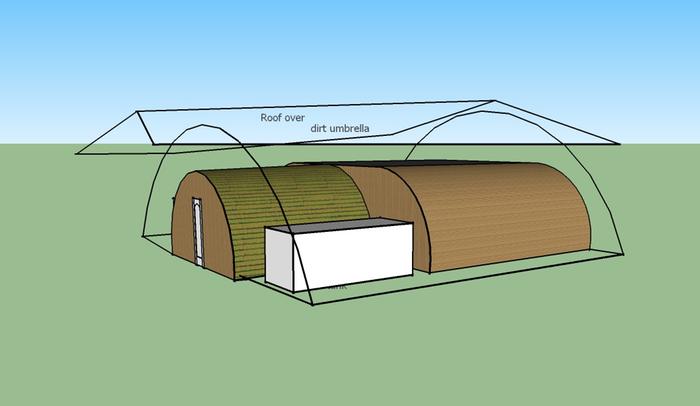 posted 6 years ago
The second section is constructed the same but a is stretched in the middle with a flat ceiling making it 32' long by 12 or 16' wide attached with a doorway into the 16'arch.
A couple of views of the structure and the final file.
ShipLapLogWofati.jpg 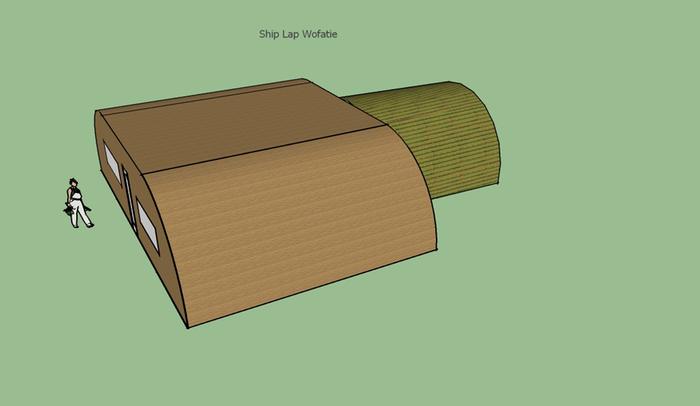 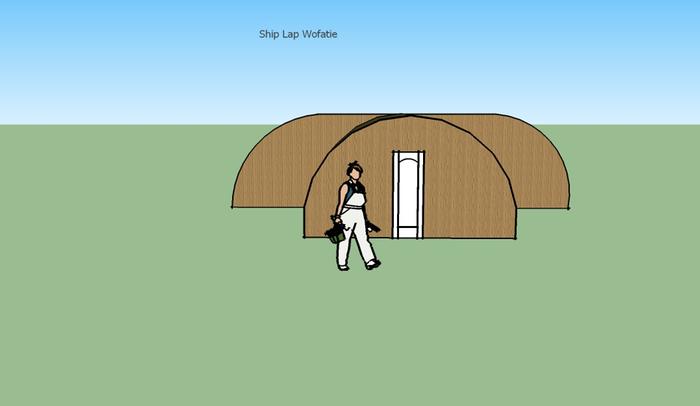 I'm interested (immediately excited) in the duration benefits, construction benefits, and moisture guiding techniques used in the ship lap method you are promoting.

Also, maybe a hand drawn plan and section would convey the idea further.?


Here are 3 structures built with Austen & Erickson milled logs. #1 had the logs refinished at the last sale because of poor quality of original application. #2 appears To have the caulking renewed. I did not include the portion which used to be a carport but is being converted into a living space with windows on both sides. #3 is an example of the simple square design with a hip roof. It is visible to the public having been built behind a store on the highway for the owner of the store. Notice that if the logs are pealed while there is sap under the bark and then sealed well before being exposed to damp weather they retain the original white color. AS Jim found out The sap on the logs invites mold to grow under damp conditions. A 4th house like #3 without overhang, no finish applied and gutters not maintained had the logs rot out on one side and replaced with a stud wall and the whole house resided because of the ugly appearance of the logs. These house are 50 to 60 years old. The new owner of #1 told me he is very pleased with it. I know the owner of #2 is very proud of his and maintains it well even though it has trees on the south side and a creek view on the north. I believe #3 is a renal but it has been holding up quite well.
A-E-log1.JPG 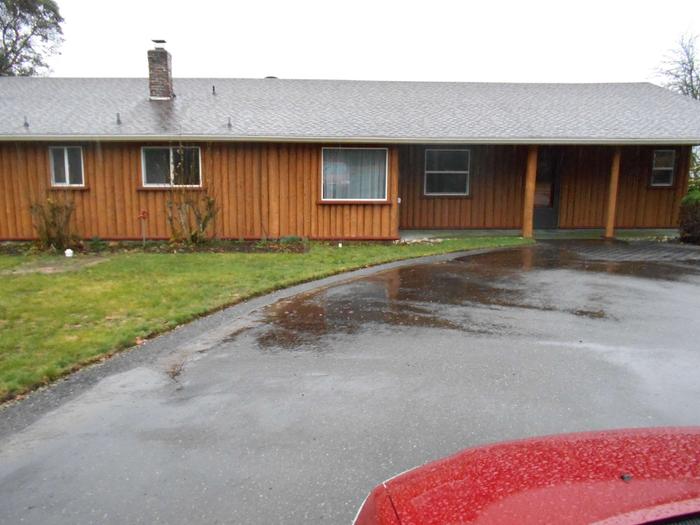 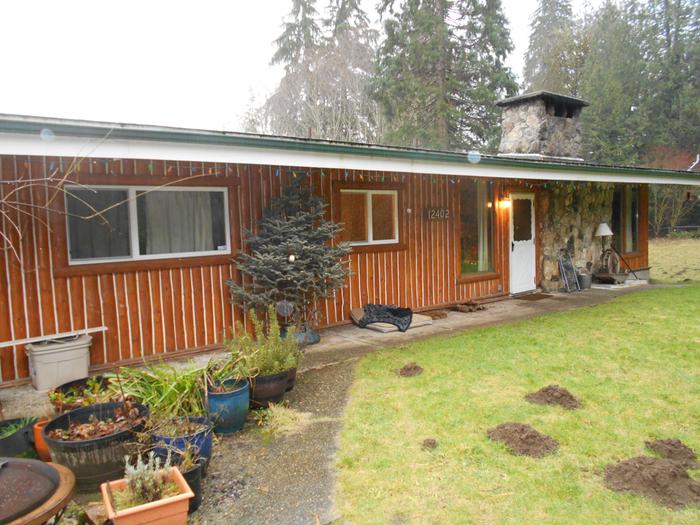 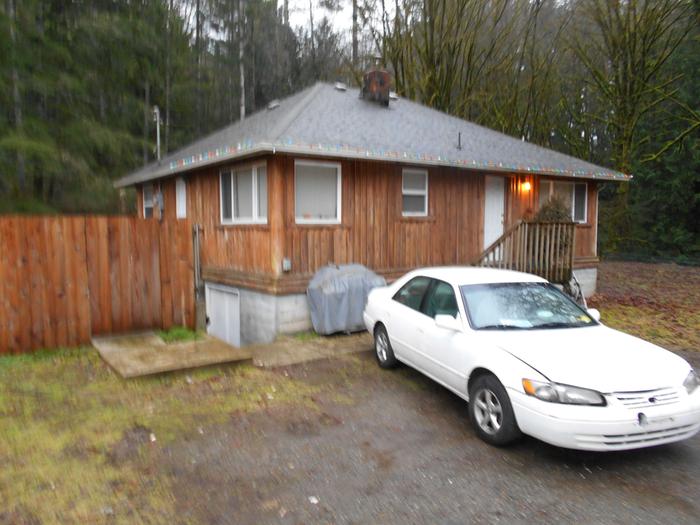 posted 6 years ago
Looking over the picture after they posted, I would like to draw attention to the window framing. #1 & 3 used ordinary framing and the windows were high where they do not have a heavy load bearing. But #2 has the recommended framing using the same logs, in this case mitered on the corners. I think it would be stronger with a but joint between the verticals and horizontals and narrower if carrying an earth berm.
I remember watching a retired carpenter build one by himself. The bottom of the logs was notched to fit on a 2x4 bolted the the foundation wall. The corner log was flattened on two sides at right angles to each other with a groove in the center of the flat side. with the corner braced plumb he drove a spline into each groove then he could put the bottom of the next log against the footing and stand it up with a brace and pound its grove into first spline add another spline and repeat on each side.
With the shiplap log that I am advocating it should be easier and require less pounding and the logs could be tied together with 2 long screws trough the lap. Using a sill log with a lap on the top facing outward on a drained gravel foundation the pressure of the berm would be transferred to the earth floor on the inside. A header log could be notched the same with the ceiling logs lapping into it. For the arched portions I think ti would be good to have each horizontal log notched into its corresponding vertical log.

I will have to go back to Sketchup and see if I can make the structural elements and assemble them. also I would like to do the greenhouse berm and roof patio design which would incorporate a rocket mass heater/cook stove on the outside that could heat a sleeping bench on the inside. Perhaps a rocket mass water heater/cook stove like in 0.7 that could also heat a sleeping bench on the other end.