posted 5 years ago
I have read various articles and forum posts debating the need for a sealed vessel for fermenting. Some say yes, some say no. I've done sauerkraut both ways and it came out fine. However, they have been short ferments and I've never felt comfortable that I could keep the cabbage fully submerged in the brine. I assume fermenting in an anaerobic environment would make that less important. When I look at various airlock systems, they seem expensive and/or complex. In search for a much simpler (and cheaper) alternative, I'm currently fermenting a batch of sauerkraut and two jars of carrots using plastic baggies as an improvised airlock system. I've placed baggies over the top of the jars and hold them in place with rubber bands. My theory is that this will provide an air-tight seal but will have enough "give" to release any gas pressure that builds up inside the jars.

Has anyone tried this method? I looked around on this site and elsewhere and haven't found anyone using this system. Of course, it may be common... Thoughts on pros or cons?

The carrot jars were initially covered by simple sandwich baggies, as shown in the picture. Within 24 hours, the jar on the left began to inflate with gas. I pressed down gently, but firmly, and pushed the gas out. I've since covered the jar on the right with a quart storage bag, thinking it would provide a sturdier membrane. I will leave the baggie on the other jar to see how it survives. The sauerkraut jar is covered by a much heavier gallon freezer bag. The two heavier bags have shown no signs of inflating, while the sandwich baggie on the one carrot jar has begun to inflate again. I guess any of the jars could develop enough pressure to blow off the bags, but I suspect gas would leak out before it reaches that point. And, it's easy enough to press out the gas without exposing the ferment to air. 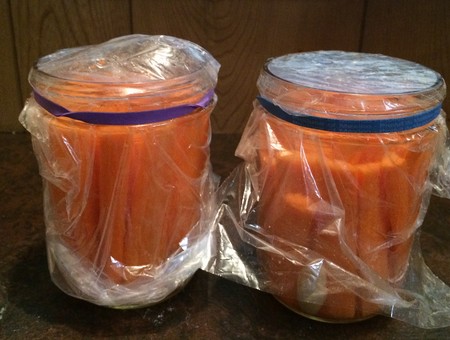 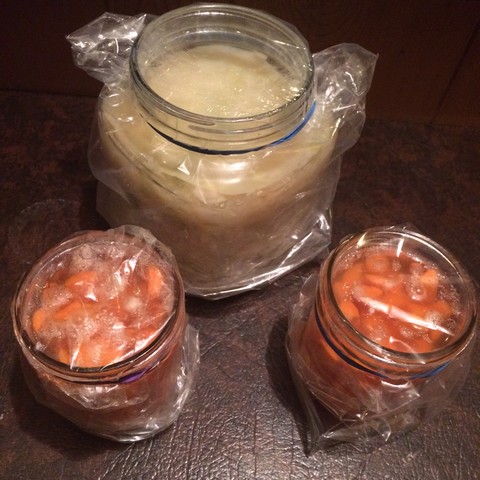 posted 5 years ago
Great work James. I know other people have used versions of plastic bags. I don't use plastic bags because I don't want highly acidic liquids eating up the plastic in the food that I'm going to eat.

I have a couple of similar practices. I use a carafe, and put a small bowl on top. It fits so tightly, with a vertical 2 mm layer of water to keep out air. That water seal is about 1/2 inch tall. It keeps a water seal but you have to watch it every couple of days. Another one I use is a small flat ceramic lid that fits into my mason jars almost perfectly. It keeps the food under water.

I also use a crock with a plate, rock and cloth on top.

I also use a customized, water tower crock that is smaller. You have to watch the water level on that one too.

posted 5 years ago
That's really clever! I've only ever tried it with 'real' airlocks- as I happened to have them leftover from brewing (and the tools to drill into the lids of jars).
James Laughlin
Posts: 6
Location: Tulsa, OK
1
I like...

I don't use plastic bags because I don't want highly acidic liquids eating up the plastic in the food that I'm going to eat.

In this case there is no direct contact of the plastic and the food. However, condensate collects on the bottom of the plastic and no doubt drips into the brine. I've read of people using plastic bags filled with brine as a weight to hold the food under the water. In that case the plastic is in direct contact. I wonder if either case is a real concern with food-grade bags? Perhaps using plastic as a lid would be less likely to leach bad things? Or, exposure to the gas-filled environment might actually be more corrosive to the plastic than resting in the brine.... Hmm, food for thought.

I'm planning to let the cabbage ferment another two weeks at least and will most likely go longer depending on the flavor developed. I expect to move the carrots to the fridge in about six days.

posted 5 years ago
People often use a balloon on top of a carboy instead of an airlock for brewing, so this should work too. When you're using small jars like you are, though, a really easy way to keep food submerged in brine is to scrunch a cabbage leaf down over top of them. It's stiff enough to hold everything in place and doesn't introduce any toxins. I use it on kimchi. It usually ferments no more than a week or so at room temp, but it can sit in the fridge, slowly fermenting for another year or more. Never had mold, etc.
Jami McBride
gardener

posted 5 years ago
I also use large leaves - like from my horseradish or cabbage, such as Jan mentions.

I've used plates and weighted objects in the past but it wasn't a perfect set up and I had molds from time to time.

As for your bag experiment I would say that the gas is finding a way out on those bigger jars/bags that are not ballooning while and smaller one might have been more air tight. I too would worry about the bags adding something to my ferments and so I wouldn't even try it. Thanks for sharing your experiment, I'll be interested in how it works out for you.

Roy Hinkley
pollinator
Posts: 350
Location: S. Ontario Canada
26
posted 5 years ago
While you probably don't really need an airlock at all it is good to keep it covered though I think you could find something better than plastic. Even a loose canning jar lid under the bag would work to keep any condensate from re-entering the jar.
Realistically? Probably so little as to be insignificant.
More so than an airlock I think your biggest concern should be the #1 rule, keep everything submerged under the brine at all times.

I use a food grade silicone bowl as a lid/airlock after plenty of thought. I'll see if I can find a pic.

posted 5 years ago
In researching the topic of plastic and food safety, I found this interesting article that discusses which types of plastics are considered safe and those that might leach BPAs, phthalates or other nasty things. Most sandwich bags (Ziploc, Glad, Hefty, etc.) are made from low density polyethylene (LDPE), which is considered a "low hazard" product not known for leaching contaminants. Elsewhere I found that LDPE is also resistant to most acids (including carbon dioxide) at temperatures up to 140 degrees F. So, nothing is guaranteed in life, but I suspect the bags are fine in this application.

The light baggie on the carrot jar expanded to a certain size and then stopped. I'm assuming even a small amount of internal pressure overcomes the seal created by the rubber bands. The baggie most likely expands because it is lighter and looser than the heavier plastic bags, which have shown no signs of inflating. That's all fine. If gas inside the jars is under just a tiny amount of pressure, there is very little chance for oxygen (or mold) to get inside and cause problems. Having the gas seep out means there is no need for me to "burp" the jars.

All good, since my wife gets annoyed when I check the jars five times a day. "They are going to be there for a month, no need to play with them every day!" she says....

posted 5 years ago
You do not need an airlock to ferment.
Kraut will make in an open barrel as well as a sealed one. So will pickles.
The idea of an airlock is to help reduce contact with the O2 which favor the growth of yeast and bad bacteria.
The fido jar works on the same principle as the baggie and rubber band posted above. It reachs a set pressure and will self burp.
I think the most important thing in fermenting in the container category is getting your contents under the brine. ANd keeping them there. The brine acts as an airlock in itself by keeping the vegetable from having direct contact with O2.
On the subject of plastic.... Phalates and BPA are pretty bad things and good luck avoiding them. They are in shampoos and lord knows what else. They mimic estrogen and can estrogen is best not to be added to your growing boys for sure.
For a fun project in fermenting try a rubber glove in place of the plastic baggie. It will blow up and give your kid a high 5

posted 5 years ago
I saw another way to use the baggie. I am not worried about the plastic in a food grade baggie but some are. That said here is how you can make that baggie act as both an airlock AND a weight.
It is messy if you are a frequent taster like I am but does work.

Fill your jar with veggies to about 1/2" under the first narrowing of your jar. Top with enough brine to cover the contents.
Take a baggie and press down on your contents. Fill the baggie full of brine.
Fold the baggie down over the jar and THEN place your rubber band.

This allows CO2 to escape between the jar and baggie as well as any overflow and will move up and over the jar rim and into your catch pan. It will appear that there are bubbles under your baggie but after a few days of active fermenting it can be pretty well certain it is CO2 not O2 and will not grow mold.

With any form of airlock like this , the initial cost is low but can get tedious if you have kahm yeast you want to tend to or you just want to taste. Set your baggie into a bowl and taste and it might be a good idea to also double bag to prevent a leakage.