Benton Lewis
Posts: 162
posted 5 years ago
Any one growing hardy yam in my location or one with a similar climate
Steve Oh
Posts: 51
Location: SW Ohio, 6b, heavy clay prone to hardpan
16
posted 5 years ago
Unfortunately for me, your link just goes to a blank search page.

There are several species of Dioscorea that are called hardy yams. They vary in edibility and palatability. Most require some degree of preparation, due to toxins, or unpalatable mucilaginous sap. To further confuse the issue, there are reports of the same species being both edible and toxic. Most are considered very invasive in the US. Some produce small, peanut-sized bulbils, others produce larger golf ball to baseball sized "air potatoes"

It is important to positively identify the plants that you have, and sometimes the variety as well.

Here we grow D. polystachya, "Chinese yam or cinnamon vine". (It is often misIDed as D. batatas or D. oposita) It's one of the few Dioscorea species that can be eaten raw, although it's a bit slimy. The small, peanut sized bulbils are prolific.
D. alata or purple yam is reportedly a staple food crop in some areas, although I have no experience with the species and can't speak for it's use.
D. bulbifera is reported to be very invasive and to grow throughout the southEast US. This is the typical, large "air potato" often thought of when people mention "wild yams" Some report it as edible with special preparation, others report hospital visits after trying to eat it. Again I have no experience with the species and can't comment on it's properties. It has been suggested that there are at least two sources for this species with differing toxicities. Some are though to originate in the far East, other's in Africa.

Kyrt Ryder
Posts: 947
Location: Graham, Washington [Zone 7b, 47.041 Latitude] 41inches average annual rainfall, cool summer drought
53
posted 5 years ago
Bulbifera has multiple strains. The wild stuff is near-inedible [requires a great deal of blanching etc] with toxins, but there are cultivated varieties in its native regions that are used for agriculture.

Good luck getting your hands on the edible varieties though >_<
Tyler Ludens
pollinator
Posts: 11804
Location: Central Texas USA Latitude 30 Zone 8
1097
I like...

posted 4 years ago
My Hardy Yam Dioscorea batatas is producing mini-tubers.  I plan to plant these in favorable spots in the kitchen garden.  I'm not sure if I should plant them immediately, or save some in the fridge over the cold season.  Maybe I'll try both tactics. 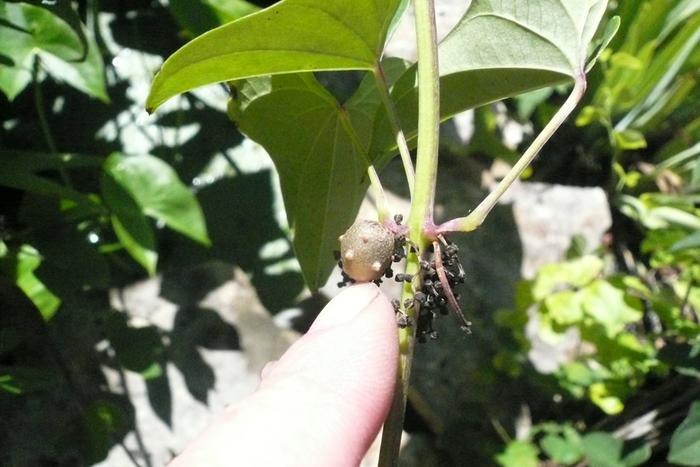 Ryan Plankenhorn
Posts: 1
posted 4 years ago
Tyler- Did your mini bulbils take root and produce a vine yet? I planted some yesterday that had fallen off of my Dioscorea alata.
Tyler Ludens
pollinator
Posts: 11804
Location: Central Texas USA Latitude 30 Zone 8
1097
I like...

posted 4 years ago
I haven't planted them yet.  I'm not sure I want to devote space to this plant that doesn't like my climate - in dry years it doesn't come up from the tuber at all.  The yield of mini-tubers is small.