posted 5 years ago
Hello! Does anyone here have experience with wet curing?

I put two hams each weighing 3kg to cure in brine according to the recipe in the river cottage 'pigs and pork' handbook a week ago. Took them out today and I have a few concerns. Firstly there are some discoloured parts, the meat is just very dark in some places and I'm wondering if I didn't manage to fully submerge them. Secondly I brined them in a big stainless steel pot and now I'm reading that they mustn't go in anything metal??? It was kept very cold and it all smells fine, the dark meat just looks dark but not bad per say. Finally I haven't used the nitrate salt because the book didn't ask for it and I figured ham would be ok without?

I've never done this before and I'm feeling terrible that I may have wasted this meat!!!

Thanks for any help

posted 5 years ago
What ingredients did you use for the brine? Specifically the salts.

Stainless steel may not be ideal, however I don't see it causing a problem over such a short period of time. A ceramic or glass container is ideal for long term curing, as the salt won't interact with the material. Plastic is also very popular these days.

Is there a greenish color, almost shiny to the dark areas?

Edit to add: I see now, that you didn't use the nitrites, so it's unlikely your meat will have a bright rosy color. This is one of the side effects of using nitrites/nitrates.

Smell is going to be one of your best tools in determining how good the meat is. Trust your senses, they are your best guide.

posted 5 years ago
Erwin : I though about asking local butcher, but I doubt they would be very helpful... They would automatically advise on using curing salt I think... Asking neighbours would be more helpful than asking "French-diploma-trained butcher", but the one I asked only knew about dry curing, with curing salt..
I will try to call a butcher tomorrow anyway...

no greenish look to the ham now, the smell is quite nice, comparable to the pig's smell (which is actually the pig's fat we use for cooking... so much fat on those kune-kune it's unbelievable)

here are a couple of pictures taken after cooking the ham. I suppose I should have taken pictures before we cooked it.... (and if you cannot see the pictures, then sorry, I am (was ?) still trying to work out how to put pitures on here... 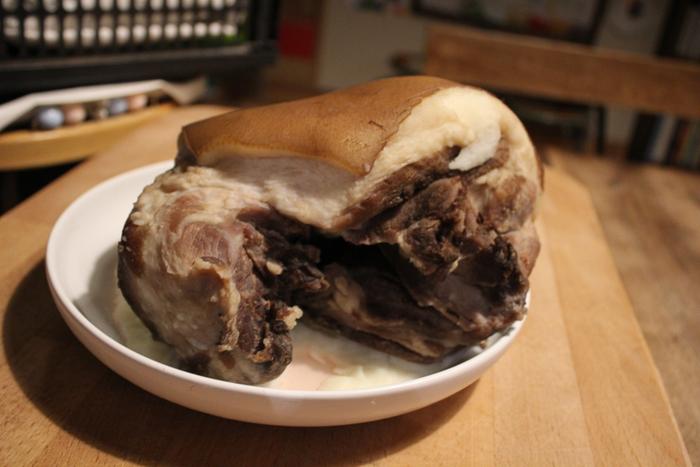 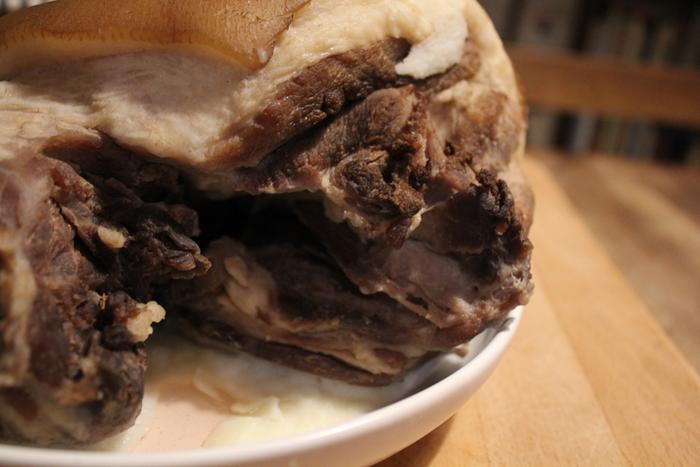 posted 5 years ago
Looks a lot like my pork does if I don't use curing salt.

Because this is the internet and the internet is forever, this is a reminder for the folks at home to be aware of your food safety...blabla, if in doubt, toss it out.

But if it was my ham, and it smelt as good as it looks, I would be happy with it.

Qutie often, when not using curing salts, I will increase the salt by 10 or 20%, just to be extra safe. But most people I know who cure meat, don't bother.

That's the problem with the internet, I can't smell or taste your ham for you, so I can't tell for 100% certain how good it is. It's going to be up to you what you choose to do.
But the colour looks good from here.

Erwin Decoene
pollinator
Posts: 145
Location: Courtrai Area, Flanders Region, Belgium Europe
26
posted 5 years ago
Metal crockery is designed to leave no taste. Under some circumstances you get a bad taste from using metal pots. I never cured ham but in my experience i got bad tasting food only when using non-stainless steel pots under very acidic circumstances (fruit juices, strong vinegar, ...).

If the absence of nitrates and nitrites is your concern - these are new additives. Meat, fish, and other foods have been preserved for millenia without nitrates/nitrites. Nitrite binds to metals !!!
If i am not mistaken nitrates are mainly used to maintain a nice rosy colour. They may be dangerous for young children https://en.wikipedia.org/wiki/Methemoglobinemia. That's one reason why their use is restricted in the EU.

I add these wiki links - these texts are not translations - they are more or less complimentary.

Use the links to check out further but I concur with R Ranson - use your senses.
r ranson
master steward & author

If the absence of nitrates and nitrites is your concern - these are new additives. Meat, fish, and other foods have been preserved for millenia without nitrates/nitrites. Nitrite binds to metals !!!
If i am not mistaken nitrates are mainly used to maintain a nice rosy colour.

Using Nitrites and nitrates is historically normal (what's new is the understanding of what sodium nitrite and sodium nitrate is). A person don't have to use nitrites/nitrates to cure meat. But, in the past these salts were frequently used to cure meat.

Nitrites/nitrates have been used by humans to cure meat for thousands of years. They are not necessary, but they do provide an additional measure of safety, taste, and as you say, colour. In the past these curing salts were from vegetable sources and/or saltpeter. Saltpeter is most common in Europe. The big problem with saltpeter in history is the amount of nitrate/nitrite in it was unknown, so people would often use far more than we do today. Looking back as recently as 100 years ago, the amount of nitrite/nitrate used in curing meat is shocking by todays standards. Medieval and Roman recipe books both call for massive amounts of curing salt. Likewise, a few archaeological finds include cured meats, which were cured with nitrite/nitrates.

It's good to remember that for most of human history salt was a luxury item. Even if you lived by the sea or near a salt mine, salt production was often heavily controlled by local officials... depending on when and where you are in history, and salt was hard to come by. If you lived inland and away from salt mines, then you had to depend on trade to get your salt. To reduce the amount of salt used, people used things like saltpeter in their meat curing. There are other reasons for doing it too, but this is one of the more common ones.

The curing salts we use these days are historical unusual because they contain so little nitrate/nitrite.

There are plenty of ways to work without curing salts, one of them is to increase the amount of regular salt you use.

posted 5 years ago
When I wet-cured hams, I did add some pink salt to the mix. Botulism is a thing I'd rather do without. I used the recipe in the book "Charcuterie." Actually, even when I dry-cured hams I had just a teensy bit of pink salt in there. I guess I'm paranoid! I had a patient with botulinum poisoning years ago - the paralysis lasts until the body makes new neuromuscular junctions, which is weeks to months. Bad news.

Any time you are curing meat, I'd advocate for checking on it at least daily, and turning the meat as well. The dark bits you got could just be over-oxidized from being up out of the brine. Your risk of fungus goes up if part of the meat is not submerged.