Ned Pepper
Posts: 13
posted 4 years ago
I've got these by the hundreds and i don't know what it is but i'd too and like to know if i could use for something other than excercise lol!
image.jpeg 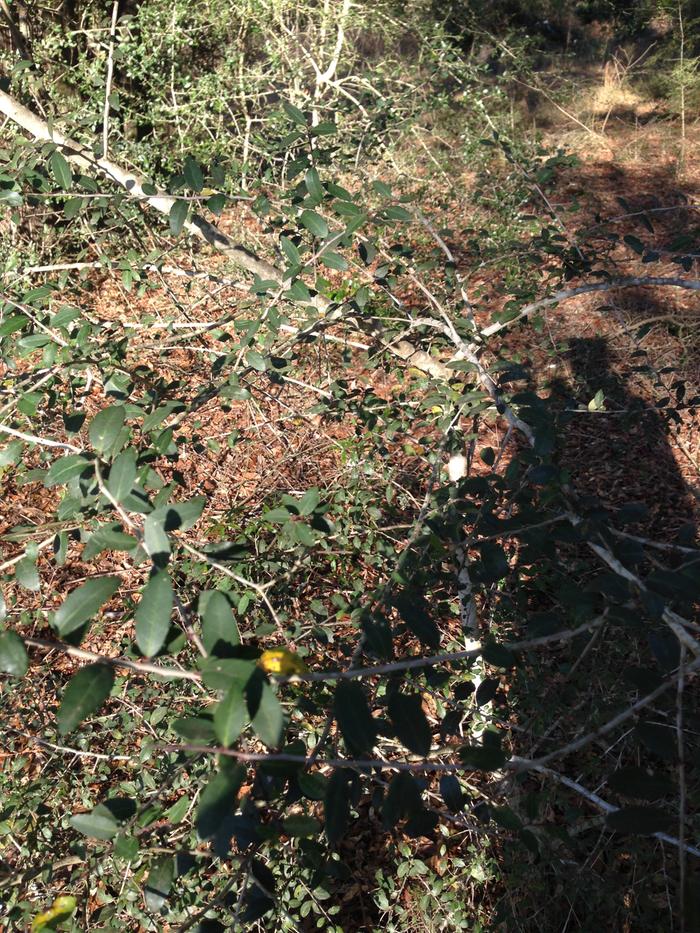 Jack Edmondson
pollinator
Posts: 416
Location: Central Texas zone 8a, 800 chill hours 28 blessed inches of rain
74
posted 4 years ago
Looks like yaupon to me. The spread by the roots, so as you cut them out, you need to keep the area mowed. If not they will sprout up, get large diameter stems; and you are back to square zero...only they have multiplied. In the spirit of permiculture: You don't have a yaupon infestation. You have a biochar/woodchip production plant. 8?>

Ned Pepper
Posts: 13
posted 4 years ago
Yes they sre everywhere around my woodline! I've used a tom for fencing and stakes and firewood/biochar. I bought some stuff last year that you brush on the area you cut off and it stops regrowth. These are in areas i don't frequent and in the future i plan to get goats in here so maybe they could keep them down. Are there any uses you know of for yaupon? Besides biochar lol.
Casie Becker
gardener

posted 4 years ago
It's one of the few (only?) North American sources of caffeine. Of course, I make no promises for the taste.
Ned Pepper
Posts: 13
posted 4 years ago
Aha!! I thought i remembered reading once they could be used as a coffee substitute because of the caffeine content in the leaves!! This is a cool link about them.

posted 4 years ago
Wow, I thought the latin name was taste warning. I think this just made it way into my future planting schemes. I'm still developing the list of small shrubs and subshrubs that will eventually be a short hedge dividing my garden beds from my lawn areas.

They're also supposed to be highly flammable and so do be aware of any that are right against any buildings.
Miranda Converse
Posts: 258
13
I like...

posted 4 years ago
I just discovered these on my property and I'm stoked! I have a pretty bad caffeine addiction and spend a fortune on redbull. I have been weaning myself off and have been trying to drink more tea (mostly to save money). Now I have an entirely free alternative, in abundance! And it's full of antioxidants! Plus, if the world goes to hell, I won't have to deal with severe caffeine withdrawal, yay!

Some more fun facts I just learned;
If you have ever had Yerba Mate (pretty damn good), it is made from the South American cousin of the Yaupon and supposedly have similar taste. Although I've only had commercially bottled stuff, which probably tastes nothing like the real stuff, I liked it a lot.

The scientific name, Ilex Vomitorium, comes from the Native American practice of making an incredibly strong tea from the Yaupon and drinking it until they threw up. A sort of cleansing ritual. Also, some of them would have contests to see who could hold out the longest before throwing up, a show of strength type thing. (I didn't read the link so sorry if this is repeated)

You can also make a non-caffeinated tea from American Holly.