posted 5 years ago
Okay guys, I've been told off because it appears I'm badmouthing airlocks. That was never my intent. Airlocks are pretty darn awesome and right now they have a real surge in popularity. Are you airlock curious, or perhaps a long term fan, please join in the conversation.

I still maintain airlocks are NOT necessary to ferment vegetables, but yes, even I use airlocks from time to time. I especially like them if I've pasteurized my veggies, doing an alcohol ferment, or if it's something I'm fermenting for storage rather than just tasty goodness.


What is an airlock?

An airlock is basically a method or device that allows ferment burps (co2 gas) to escape the ferment, but prevents oxygen (and any air loving invisible beasties that go with it) into the sauerkraut, wine, kimchi, delicious whatnot. For some reason, cucumber, garlic scapes and grape leaf pickles do best for me with an airlock and I can't understand why, but it just won't work for me, without.

Examples of airlocks (I'm hoping you guys can help brainstorm some ideas here):

Home made one with a wine airlock, a normal metal bottle lid, and some beeswax 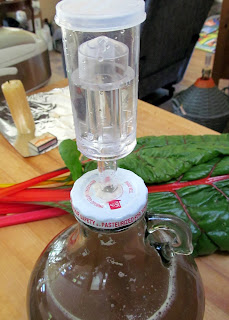 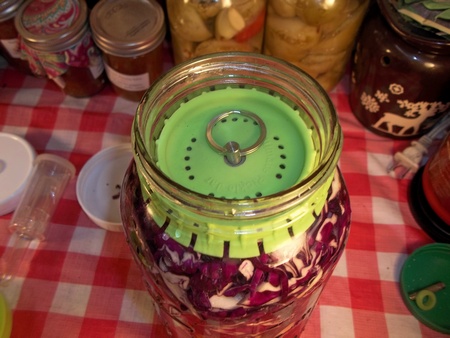 Let's chat about airlocks. What airlocks do we love? Why we love them and our personal experiences on when we love to use them. This is the thread for celebrating airlocks.

If you're an open vat kind of person, here's the thread for you.

You are a good sport Mr R Ranson for sure.

I agree airlocks are not needed meaning a fancy commercial airlock like the 3 piece wine airlock. Nor is the water dam crock. And some forms like kombucha, water kefir, milk kefir and the bran pickling beds specifically call for no airlock other than a covering to keep out varmits.

Staying away from the last 4 mentioned ferments, I will say that I personally like to use a commercial airlock when I can. It is a cheap low-paid fermenting assistant if you will. It saves the need for burping your containers which could save an accident from glass being shattered by CO2 pressure. I have not myself had that problem but lately have heard of some with over active water kefir bottles. I have only succeeded in bending a few lids and having the living daylites scared out of me..

I say can meaning when I have one free. If I do not , then I will take the burping route.

I will continue to use an airlock when I have one. Now sometimes all the airlock I have is a mason jar lid..... Again that to me is a non burping airlock. It requires me to watch for it so we do not get it bent etc..... If I am called out on a 36 hour job , I can not be home to burp my many jars!

I will use the baggie method where a baggie is stuffed into a less than full jar of veggies and then filled with brine and the top not sealed but folded over alongside the jar and fastened in place with a rubber band. This is an airlock. A self burping temporary one to me but nonetheless one I have and will use again I am sure. I am not worried about the plastic bag being harmful. If you are plastic-free. Then you can not use them. I can take that 36 hour job as I do not have to burp it.

I will also use again and have in the past, a surgical glove fastened over my jar top. This is invaluable for doing something like a real pasty ketchup recipe... The one I made last was made with processed tomato paste and to this day I do not know if it was preservatives stopping my ferment from kicking off after I added old kraut juice as a starter and even wound up using whey , which I do not like using. IF and I did use a commercial airlock because I had one not in service...... I messed up! The ferment had not kicked off and IF I had used the glove, I could have seen that I was not getting any sign of a "Hi 5" from a filled glove being blown up by CO2 production in the inactive ferment! BINGO! Eventually it started. I was very lucky for no mold right off but being not used to the thick paste, I did get something that could have passed for kahm on the surface and figured I only had a few $'s in it and scraped it. I can take that 36 hour job IF i poke a minute hole in the glove and the ferment is pretty active

I would use a crock if I had one. I am talking of the water-dam crock, the one with the water filled ring that the lid sits in. It is an self burping airlock and vessel made in two pieces. I think myself that most people who fail in these crocks are just not filling the vessel [crock itself] as full as it needs to be and because of the large space, when CO2 production slows and they open it they introduce bacteria that thrive because the low CO2 production of the nearly finished ferment can not fully re-blanket the inside of the crock. I am sorta into probiotics at the moment and do not desire to use a crock at this time due to the uncertainty I feel of storing long term and not canning properly. I will get more confident I am sure but at this time I would rather do small batches and not have to long term store. We did do okra and pickles that way last year and they were not as crisp as I would have liked them. I can take that 36 hour job if needed with a water dam crock. It is self burping

I came to to fermenting through the gateway drug called the "Old fashioned brined pickle" just like many of you and stayed as I learned a lot more of this fine art. This art or craft is one reason we as a species are here today! Cave men lived a feast and famine lifestyle. When they learned how to store that feast thru fermenting their famines got less severe. They had all day when they were not running from dinosaurs to burp their goat bladder fermenting vessels! ANd from that they started our upward journey to the civilization we now enjoy. I feel fermenting should be taught in schools. We have some preppers in the crowd, some self sufficiency lifestyle'rs and some green people prowling these sacred halls and I will bet a lot of them wished they had learned this craft earlier.

I guess my biggest complaint about the airlock issue and that of other "conveniences" or "Un needed frivilous tools" is that the older more established fermenters take a lot of pride in their thrifty ways and subconsiously "force" their opinions on the novices. When I first started, I was all gungho... I was an instant expert. I googled, went to groups and eavesdropped and then committed to purchasing all sorts of expensive jars and systems. Well, I have my success and my failures. I remember my first kahm invasion! AND I was for a while still scared of eating "live" foods as well but would not openly admit that to anyone.

I took my first failure to the boards. First thing was the initial line of questions.... "What was your salt ratio?" What is your veggie?" "How long was it fermenting when it went down?" "What system did you use?" ANd then it began! You don't need that! All you need is a goat hide, a crumpled cabbage leaf, something to hold that cabbage leaf down.... or if mold develops, just become a man, rip it outa there and gobble down the rest!

Naw. Not for me to this day. I can live with kahm yeast but am embarrassed with it when I do not notice it in a jar of pickles I drag out to show to non fermenting friends. Keep in mind that kahm can show up using an airlock and thrive in a ferment as well. But mold I am scared of! [ not scared of cheese or meat mold tho...Ok I may be crazy!]

Use your own judgement . Research, pick a system, a method and live with it. In the event the man next to you has better success rate than you and he is willing to share..... again it is your choice ")
Sincerely,
Mike