David Livingston
pollinator
Posts: 4328
Location: Anjou ,France
243
posted 4 years ago
recently I notice that some folks were having difficulty making jam this thread here ( https://permies.com/t/57002/gardening-beginners/Garden-Failures#480452) so I thought I would share my secret for making jam . I make about 100 jars a year enough for us at breakfast and to give /gift /share the rest.
None of this massive amounts of pectin or sugar I use agar-agar .
I just use per kilo of fruit 600g to 400g of sugar and 4g of agar agar per litre . Thats it I have never had a failure with any fruit .
Mix the sugar and chopped up fruit in a pan. leave over night in the fridge .
Next day cook the jam . Then when ready mix up the correct amount of agar agar in a cup with a little water leave for five mins then mix with the fruit sugar mixture, simmer for ten mins and pot .
I have never had any pot go bad nor fail to set
David

posted 4 years ago
We make about 400 jars of apricot jam every year with nothing but apricots and sugar. We certainly don't use equal weights of sugar and fruit. About 1 kg fruit for 5 liters of finished jam. It comes out chunky with fruit, not gelled at all, very fresh and summery tasting.

We chop the fruit roughly, cook down a small amount in the bottom of a large pot until it makes juice, and then add more fruit. Heat till all the fruit is boiling. Meanwhile, boil the jars and lids in water. Then fill the hot jars with hot jam, and close the lids loosely. Wearing rubber gloves, preferably insulated with thin winter gloves inside, stand the jars up to the shoulder in boiling water in a flat-bottomed pot. Close the lid of the pot so the steam is around the lids. Boil for about ten minutes. Pull them out with the rubber gloves, and stand them spaced apart to cool. We get very few seal failures and breakages especially if we check the reused jars for scratches and the reused lids for dents or bad gaskets. Maybe 1 to 2 % breakage or failed seals. It lasts great for a year, a blast of summer's fresh fruit in the middle of winter. The upper layers do turn greyish in storage but it doesn't affect flavor or preservation.

Oh, and I always make this 400 jars per year with an unruly bunch of teenagers who have never heard of canning until I taught the science of it a few days earlier.

posted 4 years ago
I made jam (or maybe it was compote) for the first time on my new stove top this week - and there was a frustrating problem - the burner would cycle off constantly after the liquid inside reached 200F - it simply refused to heat any higher then that until I put a lid on top - which of course resulted in overheating and some burning. So, another reason to beware new styled glass-top stoves...they're so busy trying to keep you safe you have to fight to make jam...
Charli Wilson
pollinator
Posts: 512
Location: Derbyshire, UK
94
I like...

posted 4 years ago
First time I've tried this, and I tried making lime & gin marmalade- so something really difficult for the agar as it contains both alcohol and really acidic lime juice.

Recipe was off the net
- 1.6kg limes (juiced, and about half of the skins cut for the marmalade)
- 3.4kg sugar
- 3litres of water
- about 1/3 of a bottle of gin (one tablespoon added cold to each jar)

The recipe said to hold it at a roiling boil for a maximum of 20 mins until it reached setting point. By 40 mins I Was getting bored so added 16g of agar.

It hasn't set brilliantly, but it is better than liquid! 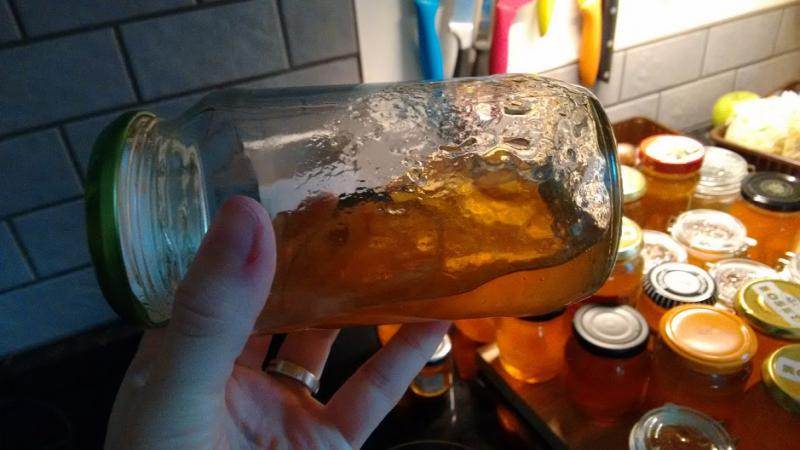 Not sure if I can do anything to rescue it and make it thicker? Put it all back on the hob and boil it some more, will this make the existing agar go funny? Add more agar?

I'm not very good at making jam, but I do try and pick difficult things to do.