ari gold
Posts: 37
2
posted 5 years ago
My brother's recently sent me a Minipresso for my birthday and while such a newfangled gadget would seem non-frugal, I'd say making espresso manually, instead of with gas or electricity, ain't that shabby. It's also pretty ridic delicious. Aaaand, since it uses less coffee/makes less espresso, you have the perfect excuse for making 'em a lot

Essentially, you're the pump. I'm about to order a manual burr grinder to stop needing m'electric one.

Anyhoo, this thread came up in the daily, so as a happy coffee addict I thought I'd share

posted 5 years ago
I too am a coffeeholic.

I just ordered this grinder because it had a better rating.   Hasn't even shipped yet.   Cheaper than your's though.   I grind in the AM just before I make my coffee.   https://www.amazon.com/gp/product/B014SBI45Y/

posted 5 years ago
The one you selected got a good review here:   https://permies.com/t/48907/frugality/Electric-Coffee-Grinder

Don't go by just me, that links to a thread regarding the best coffee grinders.

The one you had had 14 reviews off amazon and a 4 star rating.   Mine had about 235 reviews and a better rating, though not quite 5 star.   I decided to trust amazon.   The final selling point for me was that it had ceramic burrs instead of metal.   Seemed to me that Alton Brown mentioned those type of burrs on a video he made for electronic grinders.   I don't know which episode, but I do remember specifically going for that type of grinder for an electronic one.   I decided to go manual though, so was looking for ceramic for that type of grinder as well.

You will have to post how the espresso machine works.   I have never seen a manual one.

Adding one more point here.   Sometimes items sold get "improved".  So after getting a good reputation, they switch to a junkier setup then reviews might plummet.   I cannot tell if that happened with your link to Amazon, but I am suspicious that a product that has been on the market as long as the permie thread would indicate only has 14 sales off of Amazon.

posted 5 years ago
I have received the grinder - and used it as an excuse to have a 2nd cup of coffee.

I can say that I am pleased.   It does grind to a very fine coffee (the setting it arrives with) with an adjustment knob that allows you to adjust for a coarser grind.   I will leave it on the fine grind though.

Because the whole unit fits easily in 1 hand, the grinding was not hard, and not an aerobic event.  It did take some time though, but that was to be expected.   I would say less than 10 minutes, but I did not time myself.   I also stopped a few times to view the progress of the bean grinding.   It is easy to tell by feel and sound when you have stopped grinding beans.   If you plan to wash it in water after each use, forget it.   Plan on tapping it clean for a dry clean.   I plan on buying a stiff artists' paint brush to clean it.

I most definitely can see using this on a regular basis.   It stores easily in a drawer due to its compact size, but I can see the handle becoming lost due to the fact there is no way to attach it during non use.   Actually, keeping the box and storing it there if your use is just for when the electric is out would work if your planning to use it as a back up.  This won't be a problem for me since I plan to use it daily.

If I were to give this a rating between 1 being horrid and 10 being exceeds expectations - I would give it a 10.
Coffee-Grinder-Photo-of-parts.JPG 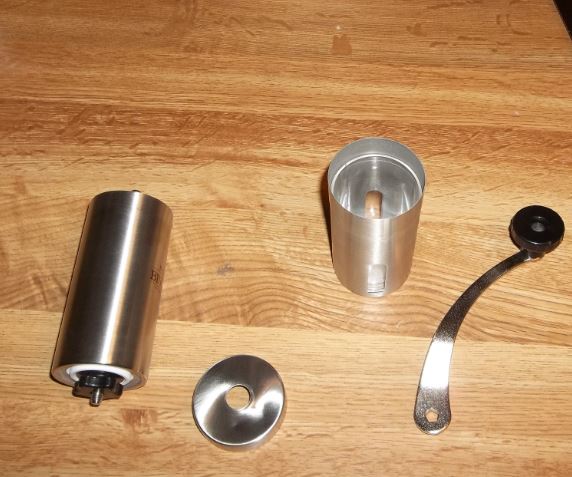 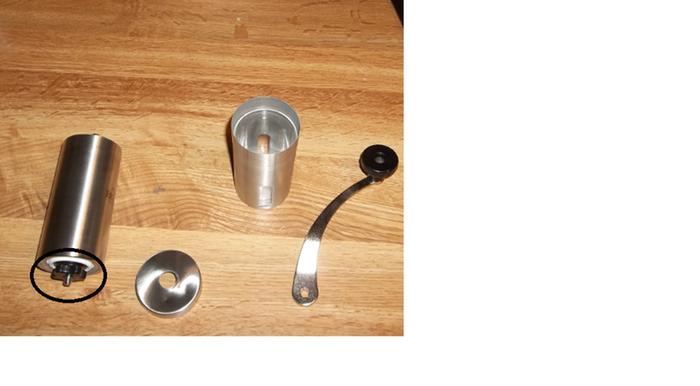 ari gold
Posts: 37
2
posted 4 years ago
Well I got that Bean and Bistro grinder a little while back and I can vouch that it's ridiculously fantastic.

I didn't think it'd be time-efficient for everthing but I use it with my Aeropress which is about 18 grams of coffee. Doesn't take too long.. 'couple of minutes. And you can walk around with it so in a way it takes no extra time

That Minipresso is pretty damn good too. I've been using the both of 'em for quite a while, just about daily. On the downside, I wonder how it'll do over time 'cause it's made of plastic. Still I'd probably get another one if this busted one day.. ridiculous crema.