Posts: 7
posted 11 years ago
I have posted to another forum about this first idea and one guy immediately shot it down.

He may have know exactly what he was talking about, but I am not 100% sure. He seemed to be comparing my idea to another in an apples to oranges comparison.

He referred to a section in the book "Serious Straw Bale Building" where they placed regular square hay bales in a spaced grid (bales placed directly on a thin layer of poured concrete) allowed to sit till first layer and bales set up together (and then teh remained of the concrete poured over the bales till level. All this in an attempt to make an insulated floor.

He said the end result was that over time that enough water rose up into the bales through the ground and concrete to cause them to compost and turn to black mush compost. Huge stinky voids opened up in the slab as the concrete over the bales collapsed.

I agree that based on that experiment bales in floors sounds like a really bad idea.


But I have a variation on that idea that I still wanted to discuss.

The idea is to get a bunch of very well wrapped bales and pack them closely side by side in a continuous sheet across the area that will become the floor.

I would not place them directly on the ground but rather on a thick bed of packed pea gravel with extensive rubble trenches around the perimeter to ensure superior drainage.

Then I would place tall boards all around the perimeter and  and use ropes or poly packing belts (you know pallet binding tape) and draw the assembly real tight.

I said tall perimeter boards for a reason, I want to fill the big shallow box thus created with about six inches of well packed sand followed by six additional inches of clean sand.

After the first six inches is packed in place the building plumbing and electrical runs are made and you lay PEX tubing for in-floor heating and cooling and follow up with the additional six inches of hard packed sand. Ultimately you cover the entire floor with large flat tiles or bricks. Or if necessary you could just pour in adobe and finish out with a soy oil binder for a good earthen floor.


What do you think of all this?

I know that when placing bottom trace of bales for a wall it is important to provide a vapor barrier.

Here I have proposed many layers of "vapor barrier" in the form of plentiful plastic wrappings on the bales.

Assuming one started by with very dry hay (and or inserted packets of desiccant and or bacterial agents in the bales prior to wrapping) do you think this could work to keep the bales dry and strong for many years?

I am concerned that having a warm floor above and the cool gravel below could cause the tiny amount of moisture in the bales to preferentially condense at the bottom of the bale and lead to a compost situation.

The alternative to this idea is to use blocks of Styrofoam as the floor insulating material and do the same sort of packed earth and sand floor to provide a large quantity of well insulated thermal mass.

Similar idea would use pumice or expanded perlite as the bottom layer instead of bales or Styrofoam as the insulation then to be followed up with the dirt or sand layers as thermal mass.

Question I have about all of these insulating materials is where are they available, and are they cost effective?

What do you think of this general approach of an insulated floor supporting a large thermal mass?

I figure the one place you can place a large thermal mass in a building (and not have it take up your living space) is either the floor or the ceiling.

Seems less dangerous and easier to place the thermal mass down below rather than trying to suspend a heavy weight above head.

Jim Argeropoulos
Posts: 96
posted 11 years ago
If I were you, I'd just avoid the problem all together and use pearlite, or some other insulation that isn't going to be impacted by moisture.
tel jetson
steward

Posts: 3685
Location: woodland, washington
177
posted 11 years ago
sounds like an awful lot of trouble to me.  I think that you could make it work, though.  perlite, or another inert substance, might be the way to go.  the appeal of straw bales, to me, is that they're a natural organic product.  wrapping them up in lots of plastic negates that appeal.

I don't want to talk you out of your plan, but maybe have a look around at some of the earth-sheltered options folks talk about around here.

posted 11 years ago
GreenAvenger , we used a system very like the one you're proposing except with no plastic. We placed bales over almost a metre thick of large stone, then smaller and smaller stone. 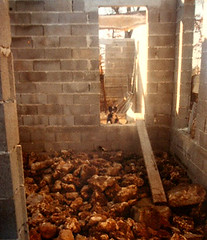 We didn't use a vapour barrier, just laid the bales then between them filled in with a chalk/cement/straw mixture which dried hard enough to support the floor above. 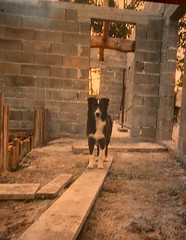 We then laid the thermal mass a flat floor in cement/chalk then topped with home made "tiles" from chalk/clay/white cement and ochres for colouring. 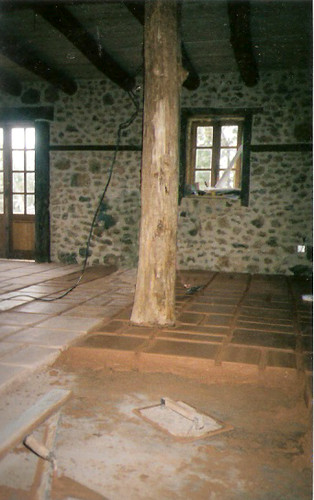 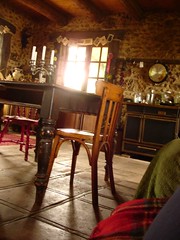 About seven years after this was done, we had to sort out a drainage problem under the floor and had to cut the string around the bales which were still in good condition.

The insulation has been fantastic, cool in summer in warm on bare feet in the winter when the stove is on and when the winter sun heats the mass up during the day. 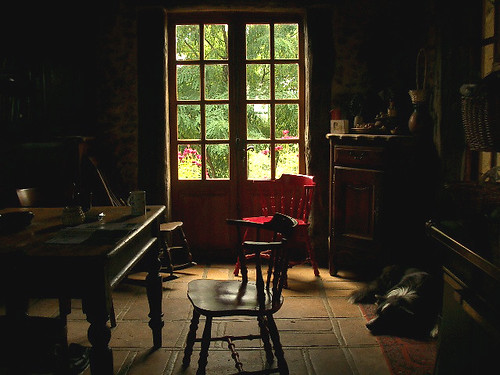 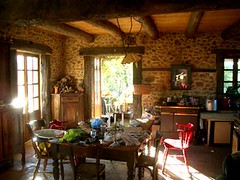 Another system we've used is empty bottles on a south facing terrace shaded in the summer but warmed by the sun from Autumn until Spring. That worked well too. We're now using empty bottles of a thickness of about 75cms for our extension, putting them down in layers with clay and small stones to help spread the weight and ensure a stable base.

In my opinion a really good underfloor insulation is well worth doing and the materials used aren't too important - use whatever you have to hand which will work. Just do it, I don't think you'll regret it, the house is so much more comfortable than one with a cold floor.

Walter Jeffries
Posts: 1114
Location: Mountains of Vermont, USDA Zone 3
64
posted 11 years ago
I did something _like_ this but I used recycled polystyrene insulation - thus it was free and does not rot. We are building our own USDA/State inspected on-farm slaughterhouse and butcher shop. The floor is a super insulated slab that is about 18" thick. It has cross-crossing layers of reflective barrier and insulation setup in channels and beams configuration. This gives it both great strength and a thermal break. About 2/3rds or so of the building is refrigerated. It is high mass (monolithic concrete mold pour) so we can shift winter's cold into the summer.

Personally, I would not use hay or straw bales because in our environment they rot. Even in a dry environment the concrete is still a water based mix and I would avoid this.

However, the concrete should not be collapsing if he designed his beams and slab spans correctly.

See the link below my signature for more about our big project.