"You have to insulate the chimney" whenever I show my Rocket Mass Heater plans. Why?

Rob Irish
Posts: 225
Location: Estonia, Zone 5/6
3
posted 6 years ago
I've been showing my rocket mass heater sketch to places that sell parts for stoves and everybody keeps telling me I can't do what I plan (even though they don't know what a RMH is it ) and that I have to insulate the chimney. So thought I better consult the flame loving wizards here.

It's an 8" system and I'm planning about 9m (30') of exhaust running through the mass. The chimney then runs up through the second floor and any final residual heat hopefully gets dropped off on the way there. I would prefer not to insulate for visual reasons and whatever remaining heat leaving the chimney I want to enter the living space.

Is it vital to insulate a rocket mass heater chimney? If not, what are the pros and cons of it? Apparently it is code here in EU to insulate, but if the logic is different for a RMH I think I could explain it to the local authorities and still get it approved. 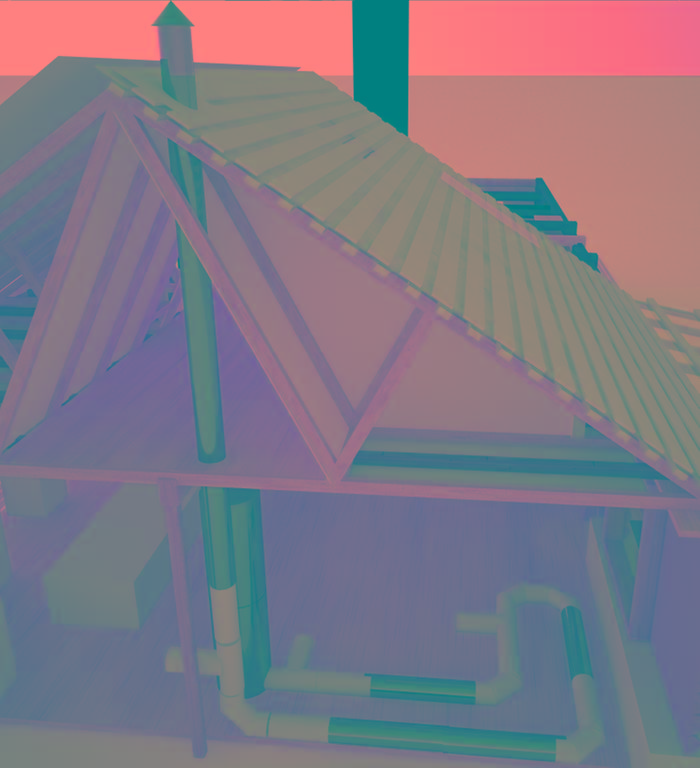 John Weiland
pollinator
Posts: 2132
Location: RRV of da Nort
496
posted 6 years ago
@Rob I: "Apparently it is code here in EU to insulate, but if the logic is different for a RMH I think I could explain it to the local authorities and still get it approved. "

Hmmmmm....I'm not sure our authorities where I'm at in the US would buy the argument.  Under optimum conditions, it could be argued that insignificant heat will be present in the chimney to cause damage.  However, I can see where a non-optimum situation might occur, possibly even a chimney fire, where the proper insulation separating the chimney from flammables in the house structure would still be required.  Just my thoughts upon seeing the design.

Posts: 3975
Location: Upstate NY, zone 5
390
5
posted 6 years ago
Practically speaking, I think it would be a good idea to insulate near wall/floor/roof penetrations, and keep the chimney to legal distances from combustibles, "just in case". However I agree that you are unlikely to find a code official to accept that.

The big practical reason to insulate the whole chimney to code would be the idea that a future owner might decide to tear out the weird contraption and put in a standard woodstove, and burn the house down when clearances are not safe for a woodstove chimney.
Byron Campbell
pollinator
Posts: 293
Location: US, East Tennessee
34
posted 6 years ago
Nice looking RMH footprint plan.


Rob Irish wrote:
I'm planning about 9m (30') of exhaust running through the mass.

Is that 30 feet taking into account 5 feet of drag for each 90 degree horizontal turn, making for a potential 50 foot of equivalent horizontal pipe in the thermal mass bench?

Code requirements aside, it is recommended to use an insulated chimney especially for multistory installations in the interest of preserving the draft / draw and getting the highest performance / efficiency from the RMH. A bare stove pipe indoor chimney will dump some heat to the room, but if to much heat is extracted from the already relatively cool RMH exhaust gases the draft will diminish and RMH performance will suffer. Not that it can't work, but it's a careful balancing act between how much heat is to be extracted by the bench / thermal mass and how much is left over to go up the stack, radiate into the upper room, and the exhaust gases still be warm enough to maintain a good draft as they exit the chimney.

posted 6 years ago
Just some thoughts that you can completely disregard if you wish, because I've never run a RMH. But I have used various wood stoves for 30+ years in cold winters.

1- as Byron pointed out, that's a long run from the burn chamber. Without a good drawing chimney, or a chimney fan, the fire may not burn for more than 5 to 10 minutes before refusing to draw. And getting initial draw may be difficult depending upon the fuel being used. The chimney will be losing a lot of heat in the mass area. (horizontal chimney). To expect it to lose more in the vertical chimney may shut down your draft.
2- because the exhaust gases will be quite cool by the time they reach the vertical chimney, if this was my stove I would extend the chimney further above the roof. Another 3' to 4' may help increase the draw.
3- since I've never run a RMH, I don't know if those horizontal pipes would need to be cleaned occasionally. If so, then I'd build it with clean out accesses so that a brush could be run down the pipes, followed by a vacuum hose or blower. Just a thought.
4- to prevent heat fatigue on the house structural wood, I would feel much better if I used the usual metal chimney collars where the vertical chimney passes through the floor, ceiling, roof. Even just a warm chimney can heat stress wood over the years.
5- I don't know the risk of a chimney fire with a RMH, but if someone were to fire it incorrectly, improper burning might occur. Therefore using an insulated vertical chimney may be cheap insurance to avoid the risk of a house fire due to chimney fire.

I experienced a chimney fire once simply because I didn't know how to properly maintain a fire in a large steel box stove. I surely did my homework after that because I almost set my roof on fire. A different house I lived in was heated by wood with no problem for 10 years, but the new owners after us promptly set the chimney afire their first winter. So chimney fires can happen with correct installation all because somebody unknowingly misfired the stove.

I guess I am sold on the insulated vertical chimney then! Some great points.

Better safety, better draw and efficiency outweighs a little bit of temporary heat while it's burning. Also less headaches with code and resale. Got it.

The 30' isn't taking into consideration the loss of drag in each corner, so yeah, that would mean 50' in the cob. You think it will struggle to pull? 50' is about the limit isn't it?

In my plans I've got the chimney about 1' above the roof, but adding a few feet sounds like it will add extra pull. I wonder: how necessary is that? I'm trying to do as high a heat riser as possible to increase the pump in the rocket.

Posts: 3975
Location: Upstate NY, zone 5
390
5
posted 6 years ago
For an 8" system, 50' equivalent is the recommended limit, and with your tall internal chimney, you should be fine.

The top of the chimney is required by code to be at least 3' above the adjacent roof surface, and 2' above any roof within 10'. This is to help ensure that air currents around the roof don't cause downdrafts at the chimney top. As your chimney is already tall, I don't see any advantage in making it taller than that.