rachael hamblin
Posts: 129
posted 14 years ago
Where are good places to look for miner's lettuce?
Anonymous
Posts: 0
4
posted 14 years ago
MINER'S LETTUCE
"Miner's lettuce" (Montia perfoliata) was a favorite of the vegetable starved forty-niners. It's one of the most plentiful-and easy to recognize-wild edibles in the western U.S. (which is where it's mainly found). It's also one of few native American plants that have been introduced into Europe, where it's known as "winter purslane".

Miner's lettuce grows in moist, rich soils in forests, along streams, and at the bases of cliffs. You'll recognize the plant by its distinctive, saucer-shaped leaves, which have the appearance of being "stabbed" through the center by their supporting stem. At its tip, the stem bears one or more small, five-petaled flowers which are usually white, but occasionally pinkish.

Next to watercress, I prefer miner's lettuce over all other wild salad greens. The plant's succulent, vitamin-C-rich leaves and stems are delicious on sandwiches (far superior, in fact, to store-bought lettuce) . . . and—combined with watercress (or other cresses), wild onions, and Indian celery—they make a delicious wilted salad. In addition, the greens are very good cooked (as are the plant's roots) and-when pureed—form the basis for a unique creamed soup.

The miner's lettuce (Claytonia perfoliata) is generally described as a Annual, Perennial Forb or herb. This Dicot (dicotyledon) is native to the U.S. (United States) and has its most active growth period in the Spring . The Miner's Lettuce has Green foliage and conspicuous White flowers, with conspicuous Brown fruits or seeds. The greatest bloom is usually observed in the Mid Spring, with fruit and seed production starting in the Spring and continuing until Spring. Leaves are not retained year to year. The Miner's Lettuce has a Short life span relative to most other plant species and a Rapid growth rate. At maturity, the typical Miner's Lettuce will reach up to 1 foot high, with a maximum height at 20 years of 1 foot.

The Miner's Lettuce is usually not commercially available except under contract. It can be propagated by Seed. It has a Moderate ability to spread through seed production and the seedlings have Medium vigor. Note that cold stratification is not required for seed germination and the plant cannot survive exposure to temperatures below 52°F. Miner's Lettuce has None tolerance to drought and restricted water conditions.
-gardenguides.com

It grew in our yard in Seattle & we love it in salads!! We had to beg the gardener not to pull it out.

When they say this plant loves shade they are not kidding, not only will it die from hot sun, in a day its like it was never there at all!
charles c. johnson
Posts: 369
posted 12 years ago
never seen it here in the midwest but it looks good
Posts: 32
posted 12 years ago
Answer: my house during the spring!!

I live in forty-niner country and the stuff is everywhere.  Its all dead now, next spring I'll try and collect some seeds.
Anonymous
Posts: 0
4
posted 12 years ago
Oh I would love to get my hands on some seeds to grow here!
Jordan Lowery
pollinator
Posts: 1528
Location: zone 7
18
posted 12 years ago
it grows in the dappled shade of oak trees here very early spring sierra nevada foothills. as long as you selectively harvest the leaves when young instead of chopping the whole plant. you can come back year after year to harvest once you find good patches.

Dianne Keast wrote:
Oh I would love to get my hands on some seeds to grow here!

Sounds like a plan.  I'm pretty sure most of the stuff is so dead right now that the seeds are in the soil, but I'll go and look in the really cool rocky parts to see if I can find some . ..if not I'll try next spring.  I'd be happy to share!!

Anonymous
Posts: 0
4
posted 12 years ago
wow thanks a bunch I look forward to it!
Paul Cereghino
gardener

Posts: 856
Location: South Puget Sound, Salish Sea, Cascadia, North America
15
posted 11 years ago
Inside Passage sells seed.  It comes quick from seed and self sows.  Moist soil and a thin deciduous overstory in a creek bottoms is where it is finest. 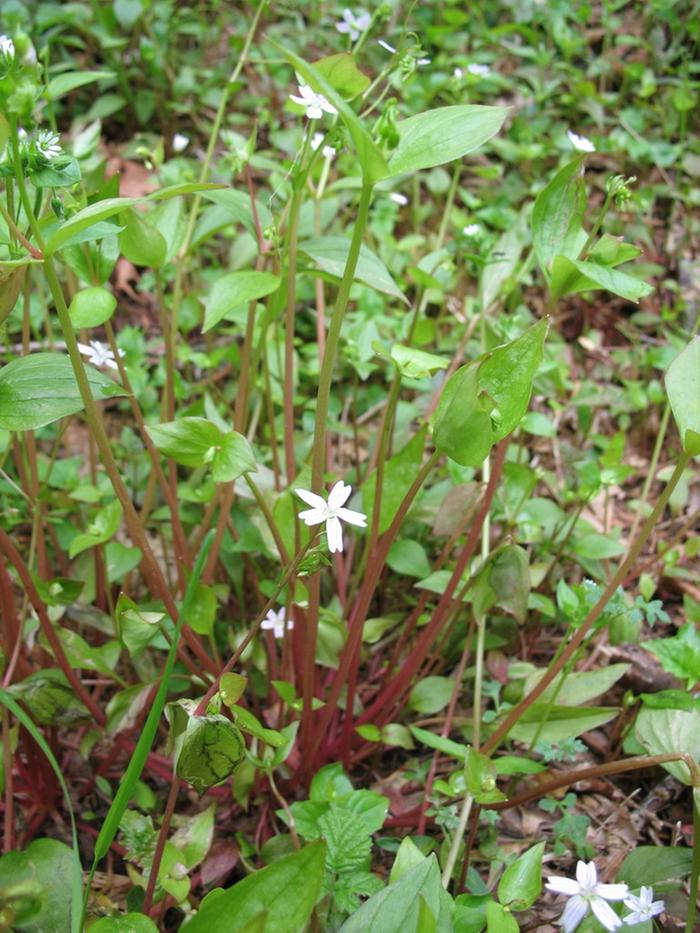 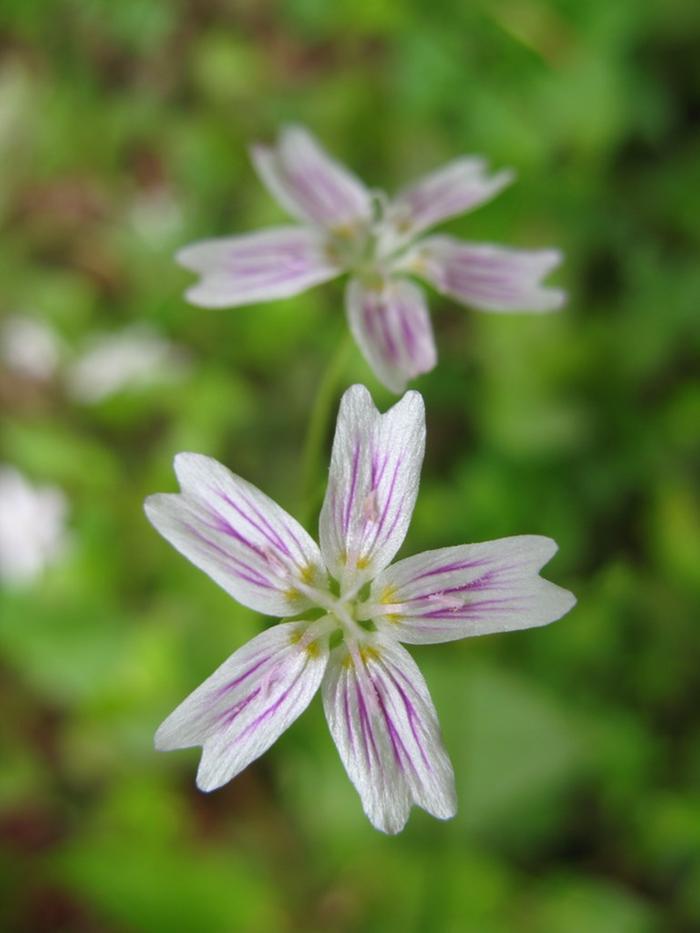 Posts: 2392
Location: Cascades of Oregon
423
posted 11 years ago
Grows all around the foundation of my house.
miners-lettuce.jpg

Posts: 45
posted 11 years ago
Thank you for the pictures! I sometimes get frustrated when I am pulling weeds. I'm aways certain I'm pulling something I shouldn't but have no real idea...

Posts: 32
posted 11 years ago
We have an insane amount of miners lettuce cropping up this year.  I'll post pics soon.  I will make good on my offer to send seeds. . . Just maybe need some suggestions on how to harvest them.
Kay Bee
Posts: 471
Location: Jackson County, OR (Zone 7)
2
posted 11 years ago
miner's lettuce and chickweed grow well together  (and make a great salad) in the southeastern US and self-sow vigorously.  Plant them once in a habitat that they can grow in and you are set for a long time!

Posts: 30
Location: Ontario, Canada
posted 11 years ago
If people want it and can't get seed from a wild plant it's available from a lot of seed companies now, even some major ones.  It's become more common in gourmet salad mixes and is sold as a 'specialty' green in a lot of places.    Sometimes it's sold as "Claytonia" or Winter Purslane.
Heather Sharpe
gardener

posted 4 months ago
Miner's lettuce is one of my favorite greens. A friend gave me some plants that showed up in his compost last year. They made it for a short while, but they do not love being moved. They must've made a few seeds, as I found some seedlings in that spot. I've sowed more seeds in a somewhat shaded raised bed with trellised peas to the South of them, hoping they'll do well there. Eventually, I want to see if I can sow them in some wilder spaces and get them established as a "weed" in my yard.

Jamie Chevalier
pollinator
Posts: 157
77
posted 4 months ago
This the the only source I know for seed from self-perpetuating stands rather than strains that have been cultivated under tilled garden conditions. https://www.quailseeds.com/store/p2/Miner%27s_Lettuce_%28Claytonia%29.html

One thing about Miner's Lettuce that I have not seen mentioned much is that it is able to grow in soils that cultivated vegetables won't tolerate. For example it thrives on serpentine soil, which has levels of magnesium toxic to many plants. (Serpentine soil is fairly common in California.) Another poison that doesn't affect MIner's Lettuce is juglone, the exudate from walnut trees. I have seen beautiful stands of miner's lettuce under walnuts.

Since tall grasses are juglone-tolerant too, sometimes all it takes to restore native miner's lettuce to an area under walnuts is mowing, so that the grasses don't shade out the miner's lettuce. The important thing is timing, so that the mowing doesn't knock down the miner's lettuce, just the grasses. Usually it has completed seeding by May, and the area can then be mowed all summer. (The same routine works under oaks, but there may be different competitors, since juglone isn't present.) The miner's lettuce will spring up with the fall rains and grow lush over the course of the winter, or early spring in colder areas. I have seen miner's lettuce self-sowing happily under all kinds of trees and bushes; it thrives in the type of soil created by fallen leaves, and used to be a feature of apple orchards in California in the spring. Under fruit trees is a nice spot for it, as it doesn't interfere with ladders and picking.

Donna Lynn
Posts: 29
4
posted 4 months ago
Thanks Jamie for the info on where to get seeds, and also about the juglone tolerance!  I just ordered some seeds for a patch under two black walnut trees that doesn't grow much besides grass and a few weeds.  I put two elderberry bushes in last year after reading that they were juglone tolerant, but they are just barely growing.  Hot peppers did OK but only on the sunnier south side.  I'd love a good crop for that shady area that is edible even if I have to save seeds and replant here in zone 6.
Inge Leonora-den Ouden
pollinator
Posts: 2432
Location: Meppel (Drenthe, the Netherlands)
761
I like...

posted 4 months ago
In the video I made of the allotment garden in March (2022) you can see Miners Lettuce ('winterpostelein' in Dutch) from 4:47

Sarah Rivkin
Posts: 16
Location: Seattle, WA 😕
posted 4 months ago
I LOVE Miner’s lettuce! I find them in a nearby park around tree bases. I use it several ways. On Teff-whiches, on a pasta or other dish, in green mainly Nettle soup, on omelettes, etc. I find that keeping some in some water keeps them fresh longer than in the fridge.
8565EE27-0977-40CE-BD22-E606628DF642.jpeg 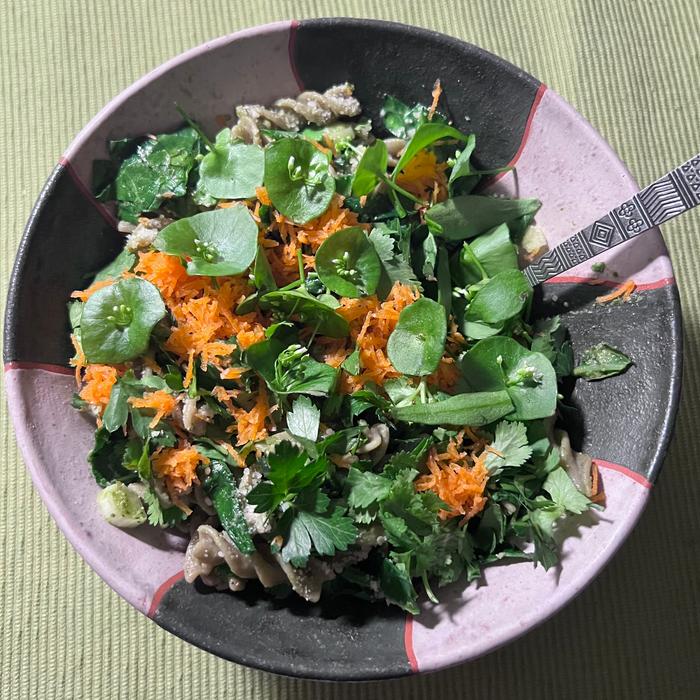 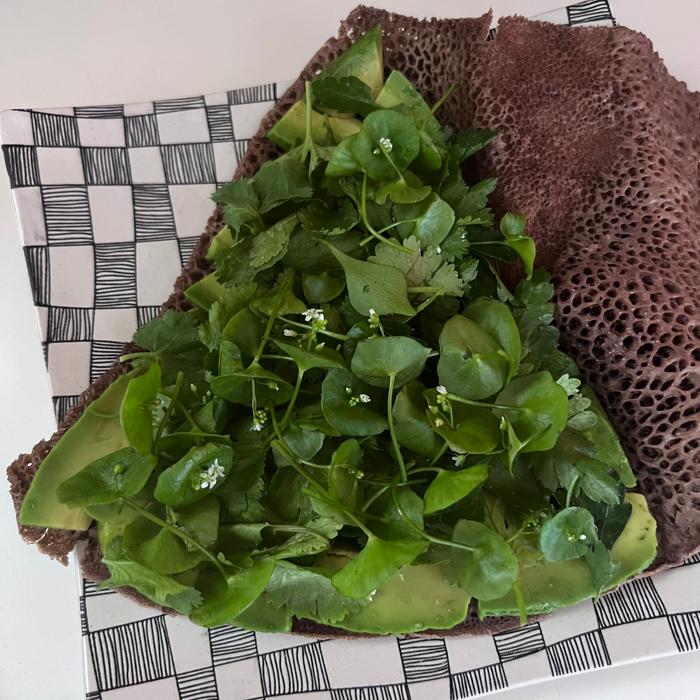 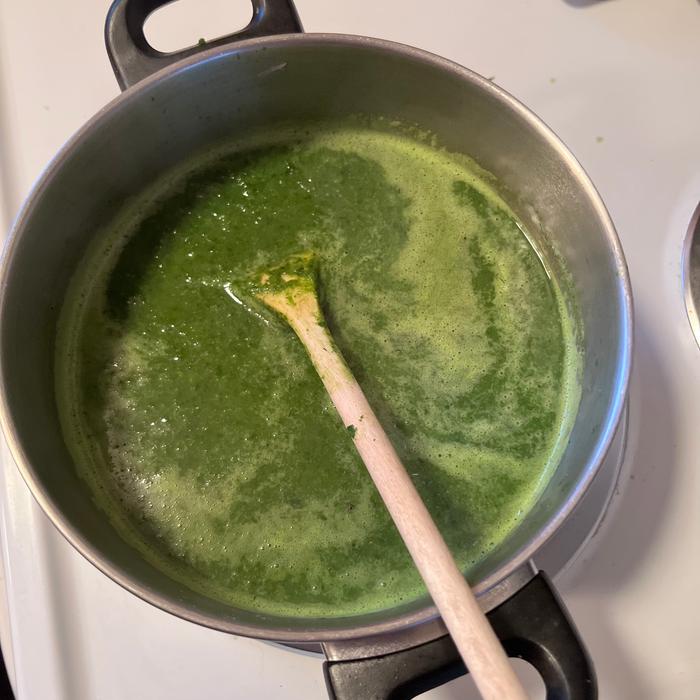 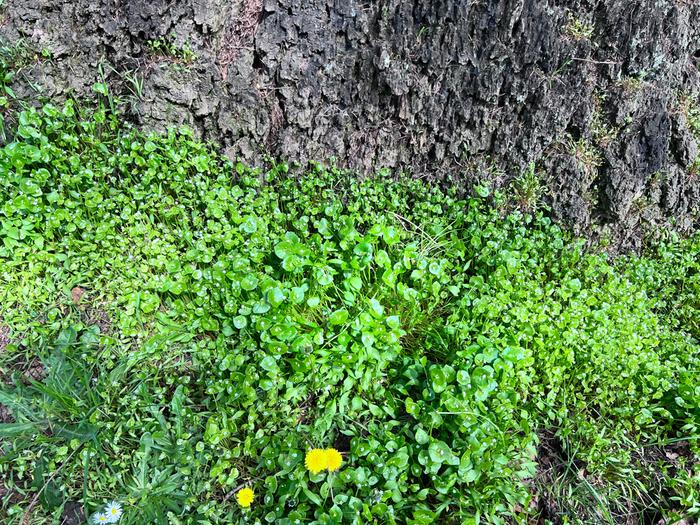 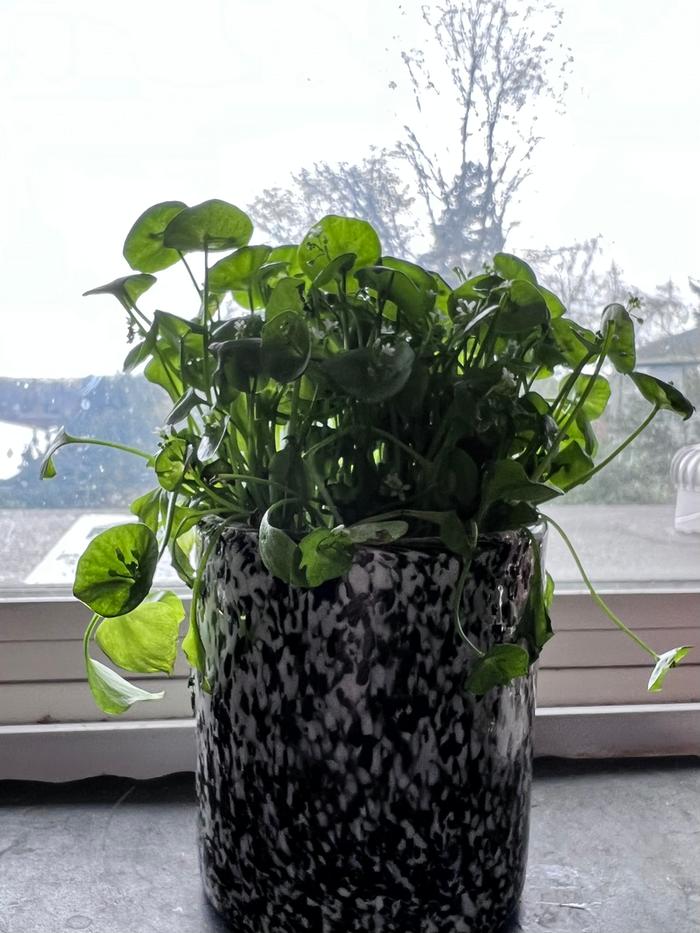