How to recycle a woolen mattress pad

Meadow Halpin
Posts: 2
posted 3 years ago
I have a wool mattress pad/topper that has gone moldy. It's about 10 years old and sat on top of a latex mattress. Owing to some health issues, I had fairly regular night sweats and both the pad and the mattress now have mold issues. I hate to throw either of them out and am wondering if anyone has any ideas as far as recycling the wool goes. I've thought about taking it out of the cotton encasement, sterilizing it (still not sure how to do this), shredding it (not sure how to do this, either), and then stuffing it in to a comforter or some such. Any ideas? The various manufacturers (all small scale folks) talk about curtains, dog beds, mulch, insulation, but none of these are either of need or practical at the moment.
James Freyr
steward

posted 3 years ago
Aside from using bleach & chemicals, I know of nothing better at killing mold than sunlight. I don't know what affect sunlight has on mold spores. I don't know of any recommendations for the shredding part either. Hope this helps!

Wool can be composted but I'm wondering if maybe the pad can have a second life before it makes it's way to the compost pile.

Give it a good wash with soap and lots of vinegar, then put it in bright sunlight for a few days.  Give it another wash, repeat with the sun, flip it every other day to make sure it has even exposure.  You might need to do this a couple more times to kill all the mold.  Having it moist (either from the wash or the dew) while in the sun, helps to create hydrogen peroxide, a natural bleach (in that it makes things white, not bleach like Clorox) which kills mould and mildew.  This is wet plus sun is a traditional method for bleaching linen.

Now that it's clean, can we cut it up for cleaning rags?  If there's no plastic in it, it might make the start of a good blanket.  It depends on what your sewing skills are, but I suspect there are lots of ways to upcycle this.  I have an old, beaten up quilt, I've been thinking of covering with boro made from old clothes. 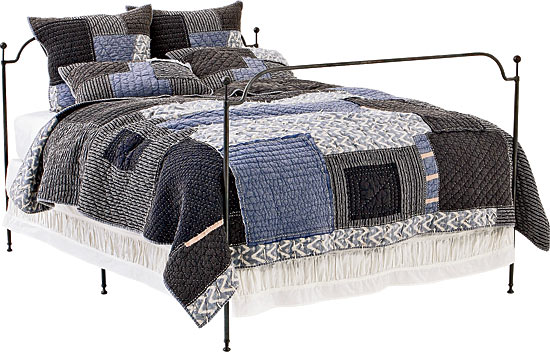 
or for a more traditional look 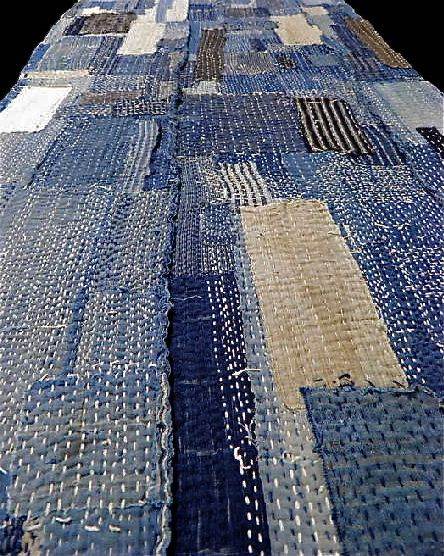 
There are some steps you can take to prevent your next topper from going mouldy.  Natural bedding takes different care than the synthetic stuff many of us grew up with.  You probably already know this, but I'm going to write it anyway in case some of the readers don't.

Give the bed a chance to breathe each day - in the morning, DO NOT make your bed.  Instead, fold the covers and sheets neatly at the foot of the bed.  If you must make your bed, do it a couple of hours after you get up.  When I first got my wool mattress, I thought this was the weirdest thing, until I remembered that just about all traditional cultures (including Europeans) let their beds breath at the start of the day.  This can expand a natural matress life from maybe 20 years to over 100.

Sunlight is your friend.  In theory, I'm supposed to put my mattress and topper in the sun about four times a year.  I only do it twice.  The sun purifies any mold or mildew that might be thinking of growing and reduces the number of bed mites that could live in the mattress or topper.

Another thing I don't do enough but would extend the life of my mattress and topper is to wash my sheets at least once a week.

posted 3 years ago
As far as mattress care: I'm assuming that this mattress is not a futon, so it's pretty heavy and not flexible.  One thing that I saw on a mattress of a home I was at the ends of the bed was a label with the months of the year on it, with the idea that you would flip and rotate the mattress monthly.  The months at the head end on this side of the mattress might be: January, April, July, and October; while on the Foot end of the bed on the underside, it might be: February, May, August, and November... you get the idea. By doing this you expose the mattress to different types of airflow.  One could even tip the mattress on the edge for the whole day and set it in the right orientation in the evening on the flip day, so that it gets an extra aeration.

As far as general wool care, I have a beautiful hand woven woolen poncho from South America which had gotten a little musty smelling in my camper van at one time.  It was spring in Vancouver, and someone told me to set it out on the lawn overnight.  The bacteria in the grass, in combination with the dew will clean the mildew.  I was skeptical, but didn't have anything to lose, and sure enough it worked.  I hung it up and it dried out as fresh as the day I bought it.  I'm not saying to do this with your mattress, but as a tip for (quite literally) livening up your woolens, I highly recommend this.

Wool can be composted or used as mulch, or made into biochar (good to mix something that dense with other rougher things so that there is room for the gases to move).

Before you do that, wool can be felted, or used as batting for things like kneepads, or other pads... like the ones people have for their arms by a computer keyboard.  Think of it as an insulator and pad.  Think of it also as fire resistant.  Oven mitts anyone?  At the end of it's second or third life, it can be used as rags.  There are thousands of upcycle things that can be done with felt.  Wash the crap out of wool and it will felt.

posted 3 years ago
can you try all of the things above and then re-use it as a topper again?
Meadow Halpin
Posts: 2
posted 3 years ago
Hi everyone, and thanks for the good advice. It's actually a 2" topper on topper that I place on a latex mattress. I've got some health issues and frequently have night sweats, so it isn't surprising that both the latex and the wood topper eventually got moldy, even with care. I've been trying to redeem the items on the bed including the latex, but am not sure on the outcome of any of it. I've washed everything washable, and usually do good until I've slept on things a few times. My guess is that there are dormant spores that re-activate with the normal moisture that comes off a body when sleeping. It's still cold here (Eastern Sierra of California) so I won't be able to get anything outside until the weather warms up a bit.