laura mangan
Posts: 2
Location: Brunswick, United States
posted 3 years ago
Hey everyone, I was hoping someone might be able to help us figure out how to use what we have to successfully dig some swales.

We have everything surveyed and now we are racking our brains together to figure out how to get this project moving along.

Oh by the way we are planning to use the swales to plant our new orchard on the hillside. (I think its in the ballpark of 300-400 trees)

I hope you all might have some ideas and ill be excited to see what we come up with..


Thanks again for the help and if you NEED any info to help you with your educated explanations let us know and we can do our best to provide.

posted 3 years ago
I am a bulldozer guy so I prefer bulldozers for making swales, but you have more than enough equipment to build some nice swales. Myself, I like a swale 12-16 inches deep over 8 feet. Why that? Because my bulldozer blade tilts 8 inches over 8 feet and with two passes casting the dirt to the low side of the swale, I get that slope.

If you want a swale in similar shape and dimension, a single bottom/ three bottom plow combination would work good. I actually prefer a single bottom plow because they really go deep, do not ride over the soil as much since there is only one plow point cutting, and they really roll some large rocks out of the way because they are not pushing a rock against another plow share.  Obviously follow the contour you want your swale to traverse. If you want a straight line, I lift the bucket of the tractor up to eye level sitting on the seat, sight to a tree across the field (mine has a hook welded in the center of the bucket), then try to line the center of my bucket up with that tree as I travel, and thus get a straight line. If yours is a curved swale, then whatever gets you that path is fine. Then just turn around and plow the opposite way, preferably with the 3 bottom plow. If you can, try and set the plow up so that the first plow share goes deep, then feathers out so the second and third one is not so deep. It is easy to do that if it has a hydraulically controlled tail wheel, but being a 3 bottom, probably has to be adjusted by the 3 point hitch. Or you can just make 3 passes with the single bottom plow making a deep one at first, then a second not as deep pass, then an even lighter 3rd pass.

This will create the start of the swale; one single bottom pass on the lower side, and 3 passes on the upper side.  To refine it you can use the grader blade. It is going to take a lot of passes to break up the sod and separate the dirt from the sod clods, but by angling the blade, you should be able to drive in the gully you made, and get the soil loosened on the uphill side to feather out from deep in the gully, to almost nothing. This should be a really good upslope shape...but as I say, might take a few passes.

To shape the downhill side, try to adjust your grader blade so that it shifts as far to the uphill side as you can. DO NOT DRIVE IN THE GULLY. Try staying on top and getting that overturned sod to roll off the grader blade down hill. Again it will take some passes to break up the sod and separate out the dirt, but by this point you should have a decent shaped swale.

You can leave it like this, but I prefer a curved shaped gully to my swales and not a harsh vee shape. You get the final shape by shifting your grader blade as far to the downhill side as you can, then by driving in the gully, but going super slow, and taking a very light cut, you can get the bottom of the swale to really feather out. This is delicate work. Even with a bulldozer it is easy to really mess this part up and cause a lot of extra work, but by going slow, having a light and constant hand on the 3 point hitch lever, you can really make a nice looking swale with hardly any hand tool work. In fact I hate shoveling and raking so much, I don't even use them.

I am not sure if I explained things well, and should I have a better camera to do video, would make a swale with the equipment you have (I have those implements as well) just to show it can easily be done. This post makes it sound far more complicated then it is. The only touchy part is the final shape to get the gully from vee shaped to curved shaped. BUT done right, it is a nice looking finishing touch in my opinion.
Tj Jefferson
pollinator
Posts: 1340
Location: Virginia USDA 7a/b
319
I like...

posted 3 years ago
Just a quick aside- be very careful, I almost flipped my tractor on a modest incline making a swale. Yeah, it was overexuberance, but the blade will tend to push you over, since you are mostly getting thrust on the uphill side. If you can get a blade about the same width as your rear tires and set the blade as far as it will go on the uphill side so it is pulling material lateral to your tire, you can keep the wheels basically level and be much safer. A plow is somewhat safer since you are anchored by the downward pull of the share, but if you have to back it out you can be up a creek because you lose that benefit. This is a long-term earthwork, spend a few more passes to do it safely!

For what it is worth, I have made my swales just over 8' wide, because I use a 6' disc harrow above the swale for annual plantings and leave a 3-4" low area right next to the downhill side (which is bermed up and I don't disturb it, just plant some shrubs on there and let stuff grow). Mine are at a 1% grade, if we get a real downpour they run off the low end of the grade through the low area, but that is maybe 3-4 times a year. The rest of the time there is no runoff at all and they are essentially terraces. I have been putting nearly rotten logs in the downhill low area to see if the heavy runoff will work around it and still give me nice carbony goodness. Will see.

Travis, I wish I had read your post about six months ago!

posted 3 years ago
That is a very valid point TJ Jefferson, and one I failed to point out because mostly I use a bulldozer for making most of my swales (use what you got after all), but as you probably know, you cannot flip a bulldozer over; I know, I have tried!

Joylynn Hardesty
master pollinator
Posts: 3105
Location: Officially Zone 7b, according to personal obsevations I live in 7a, SW Tennessee
1171
I like...

posted 3 years ago
My equipment is limited too shovels and rakes... I thought this thread might give you some ideas. Lots of pictures, diagrams, instructions. Perhaps you can figure out how to modify to your equipment.
https://permies.com/t/52817/permaculture-projects/water-build-swales
Travis Johnson
pollinator
Posts: 4958
1154
I like...

posted 3 years ago
As people on here know, I do a lot of land clearing and part of that is installing swales to prevent erosion. How many miles of swales I have put in I am not sure, but as much as I advocate doing as much as you can with what you got...and I really do advocate that...there is something to be said for using the right equipment. There is nothing better to put in swales then a bulldozer with a six way blade. NOTHING. Fortunately they can be rented cheaply.

In Maine, I can rent a decent sized bulldozer (450 John Deere) for $400 a day. It will burn about 20 gallons in diesel and probably build about a mile of swales in a day. It will also cost $85 an hour in delivery charges. So adding that up, we can see that the cost is about $650.

Now that may seem like a lot, but it might be cheaper than you think. As TJ Jefferson pointed out, swales are on side sloping hills and when steep enough they can be dangerous. A deductible to an emergency room could easily cost you more than $650 and as I pointed out a bulldozer cannot flip over. At the same time, what is your time worth? Yes you could use the equipment that you have, but how much longer would it take? If it would take more then 2-3 days to make a swale with your own equipment, it might make sense to rent a bulldozer instead. Spend a day building your swale, then send it back and use your weekends and vacation time to do other Permiculture things, especially in the busy growing season. And then there is the environmental factor. Bulldozers have a bad reputation environmentally, but it is rather undeserved. They are actually very fuel efficient. My bulldozer is far more efficient then my 25 hp kubota tractor. Oh it has a lot more horse power and burns more fuel, but with its traction it gets 8 times as much work done in the same amount of time making it actually consume less fuel. (Bulldozers are fun to operate too!)

Again, there are many ways to make a swale, but this is some compelling reasons perhaps to rent a dozer and just get the job done.

posted 3 years ago
Plus you can take pictures of yourself driving a bulldozer. I need no further inspiration! That does sound much safer. Certainly anything more than a 15% grade is really tippy with a tractor going across.

I can attest as well that it takes a lot longer to do earthwork without the right tools, is more dangerous, and will take longer to function well. I have semi-decent swales, but they looked really rough for months until they eroded a little. They will be years looking a little forlorn compared to Travis' work with a dozer. I think mine are like what Sepp Holzer would see in an LSD flashback.

posted 3 years ago
One of the good things about living on a multi-generational farm is having previous work done before you, then being able to see the results after a long period of time. In my experience, what is far more important then the shape of a swale, is how they are terminated. My Grandfather puts some swales in in 1954 after we had two hurricanes and a gale back to back. Back then we grew potatoes and the erosion was unbelievable. But while the swale was put in right, it was not terminated well and actually ended up in more erosion. Every ditch fills in with sediment over time, so there is definitely some forgiveness on shape, that is a vee shape will eventually be turned into a more rounded, concave shape, but if a person really wants to ensure proper swale usage, they will put their time and effort into terminating the swale properly.

As for bulldozers and pictures, always having them kicking around helps, but the wife and I have had fun over the years combining the two as you can tell... 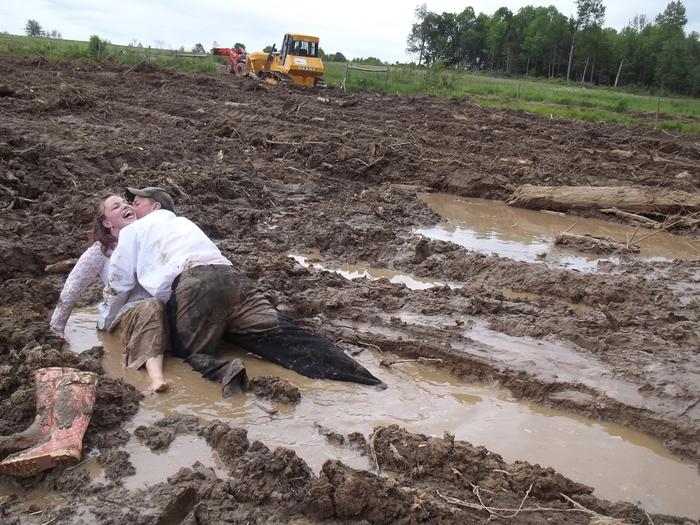 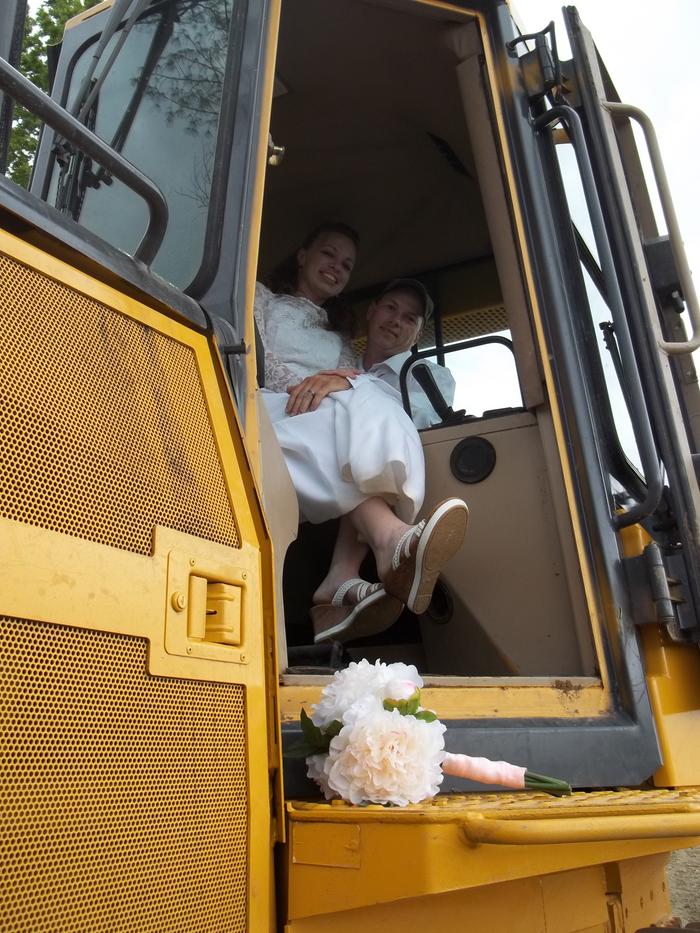