posted 3 years ago
Probably, not what you're thinking. I found some, erm, fascinating search results.

For fertilizer, saw this in Sandor Katz's ART OF FERMENTATION and did a little reading online. We know directly applying pee is bad b/c of nitrogen burning, but did you know that keeping it in a sealed container at warmish temperatures for a month is all it takes to deactivate pathogens and make its nutrients more readily available? This pamphlet from Sustainable Sanitation and Water Management sets it all out clearly, except for temperature, but I'm not going to worry about that in the summer. 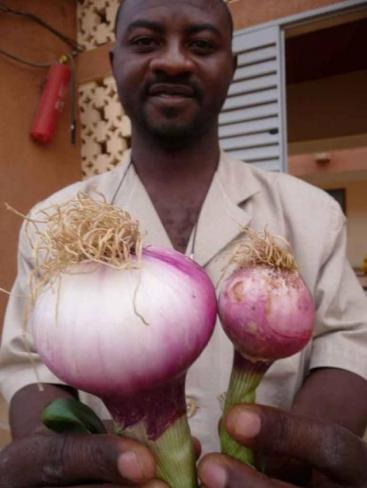 Gotta luh that pee! Farmer in Burkina Faso with onions that are fertilised with urine (left) and without urine (right). Source: DAGERSKOG, L. (CREPA)

Since comfrey tea is usually fermented from 2-4 weeks, I'm experimenting with a comfrey-enhanced pee tea for N/K. Now if I could just get some P.  No, not pee! Sorry, couldn't resist.

EDIT: Reading an older thread here on the issue, I found that wood ash (also abundant here) increases the phosphorus content, and the potassium too. Seems sealed aged pee+wood ash+comfrey could be a completely balanced free fertilizer. Only the proportions need perfecting.

André Troylilas
Posts: 164
Location: North of France
8
I like...

posted 3 years ago
I've been collecting urine and storing it in a closed barrel for a few months now, and I'm adding comfrey from times to times.
I haven't tested it yet, because I need some water to dilute it, and it hasn't rained for a few months.
Henry Jabel
pollinator
Posts: 281
Location: Worcestershire, England
60
I like...

posted 3 years ago
It would be interesting to have a comparison between the fermented and non fermented urine in a trail as the comparison here just seem to be urine vs water. In practice I don't think I have ever burnt my plants from urine application and fresh urine is in theory sterile if the person if well.

So for me (until I know better) fermenting it first appears to be just more work.
Maureen Atsali
pollinator
Posts: 453
Location: Western Kenya
62
posted 3 years ago
Hmmm.  While interesting in theory, sounds like extra work.  If there is water in the rainbarrel when I get up, I simply top off the pee bucket and go pour it on anything that needs a boost.  If there's no water convenient, I pour the bucket directly on the compost.  Haven't burned anything yet, and getting good results, so unless you can prove to me that aging my pee is gonna have amazingly superior results... I'll just stick with what works.  If it ain't broke...

posted 3 years ago
I've burnt seedlings several times though. Even when I thought it was well diluted at least 10x water to 1x pee. Those seedlings just keeled right over within a day or two. And I don't seem to learn, I've done it several different years.

posted 3 years ago
The pamphlet I linked is also interesting re storage and application: do not apply directly, but near the roots in a shallow trough, and cover immediately, b/c the nitrogen will volatilize out in the ammonia:  Because of the high pH, coupled with the high ammonium concentration of urine, there is a risk of losing N in the form of ammonia to the air. As long as the collection and storage chambers are sealed and the contact of the urine with air is reduced to a minimum, neither losses of nutrients nor changes in their availability can occur (JÖNSSON 2004).

Yes, Rebecca, I've burned smaller and younger plants too. Though the other posters are also right, I've applied and not burned anything many times. There is a grey area that I'd rather avoid by aging the pee.

It's an interesting idea to try and normalize such traditional fertilizing practices: even if I don't know the humans providing the fertilizer, I'd rather eat produce raised thusly than made with the Haber-Bosch process...figuratively (literally?) eating natural gas and coal.

Further, the SSWM writes: "If urine is used for crops that are eaten by people other than the urine producer, it should be stored beforehand for 6 months. " Good dog, who has time for that. Why are they so exercised about flowjolais nouveau?

This 2001 paper from the Swedish Institute for Infectious Disease Control, republished by the WHO, is generally pretty interesting, discussing history, sociocultural perceptions, practices around the world and plenty of hard science, but here's a TLDR b/c permies already know pee is good and pee separation also = good:

HOWEVER: "...It can be concluded that pathogens that may be transmitted through urine are rarely
sufficiently common to constitute a significant public health problem and are thus not
considered to constitute a health risk related to the reuse of human urine in temperate
climates. ...  Furthermore, the inactivation of urinary excreted pathogens in
the environment reduces their ability for transmission." Yay!

Aging is good because it raises the pH: "At pH 6 most of the bacteria had a better survival than at pH 9. The reduction of bacteria at high
pH-values may be an effect partly of the pH and partly of the presence of ammonia."

And the attached handy table.

IF YOU HAVE ACIDIC SOILS, AGING THE URINE IS GOOD because the pH goes up to 9. I think the biochar folks in the northern Olympic Peninsula like Norm Baker and Francesco Tortorici have it right: a bucket of biochar that you pee in til it's full doesn't just release N slowly from the biochar matrix, but it buffers our region's acidic soils. Biochar alone only fleetingly lowers pH, but I bet aged-pee biochar has amazing results as Norm avers in his test gardens.

Additional reading.
Useful if you want to know exactly what chemicals constitute our pee, here, in 1971, NASA (USA's National Aeronautics and Space Administration) published a report on composition and concentration of human urine. ("In space, nobody can hear you pee.") A tacit acknowledgement that you drink the water you bring, and that the Haber-Bosch process will not be available on the new frontier. 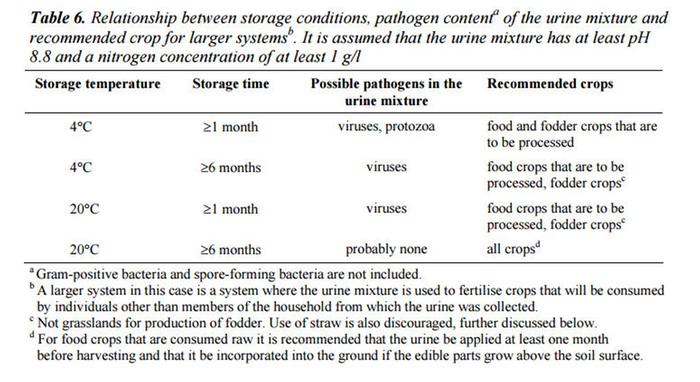 posted 3 years ago
Fermented urine is good for a lot of other purposes, too. In the documentary Tales of the Green Valley, urine was fermented to make ammonia to wash their laundry in. The quote below was written by one of the historians on the documentary. (http://www.petersommer.com/tv/bbc-green-valley-tales-article/)


Human faeces composted in a privy were used as fertiliser, and a household’s urine was stored to make ammonia, an excellent stain remover for laundry. In fact urine was collected on a massive scale; piss-pots were placed outside pubs and the urine used to make saltpeter, a vital ingredient in making gunpowder, a burgeoning industry at the time.

Now let's see if I can find the episode that they showed using the fermented urine for laundry... Ah ha! I found it!

The whole documentary is fantastic--more info about it here: https://permies.com/t/14066/Tales-Green-Valley-documentary-farm

posted 3 years ago
I've been wondering if aeration of pee would be a good idea, essentially a pee based aerobic compost tea.
Sounds like too much of the nutrients would be lost to the air.

Tommie Hockett
Posts: 64
Location: Callisburg Texas
2
posted 3 years ago
Hey guys Im sorry this may be an ignorant question..... What is comfrey?

Have a blessed day!

Tommie Hockett wrote:Hey guys Im sorry this may be an ignorant question..... What is comfrey?

Comfrey is a plant that creates a great amount of biomass, has medicinal uses, and has very deep roots that allow it to accumulate nutrients that are deeper than other plants can reach.  It's a great chop and drop plant, high in protein and minerals for chicken food.  It has so many uses that books have been written about it.  One of my favorite plants.

Comfrey is a plant that creates a great amount of biomass, has medicinal uses, and has very deep roots that allow it to accumulate nutrients that are deeper than other plants can reach.  It's a great chop and drop plant, high in protein and minerals for chicken food.  It has so many uses that books have been written about it.  One of my favorite plants.

Thank you Todd I will have to look into it. I winder if it would be good fpr goats

Have a blessed day!

posted 3 years ago
i pee into 2 liter soda bottles half-filled with charcoal, wood ash, chopped banana & citrus peel and other vegetable trimmings. i steep overnight - it results in a sort of bokashi and gets all fizzy. mixed 50/50 with water, i get wonderful results in my tomatoes (sowed the 4 big ones last August 15, 2017): 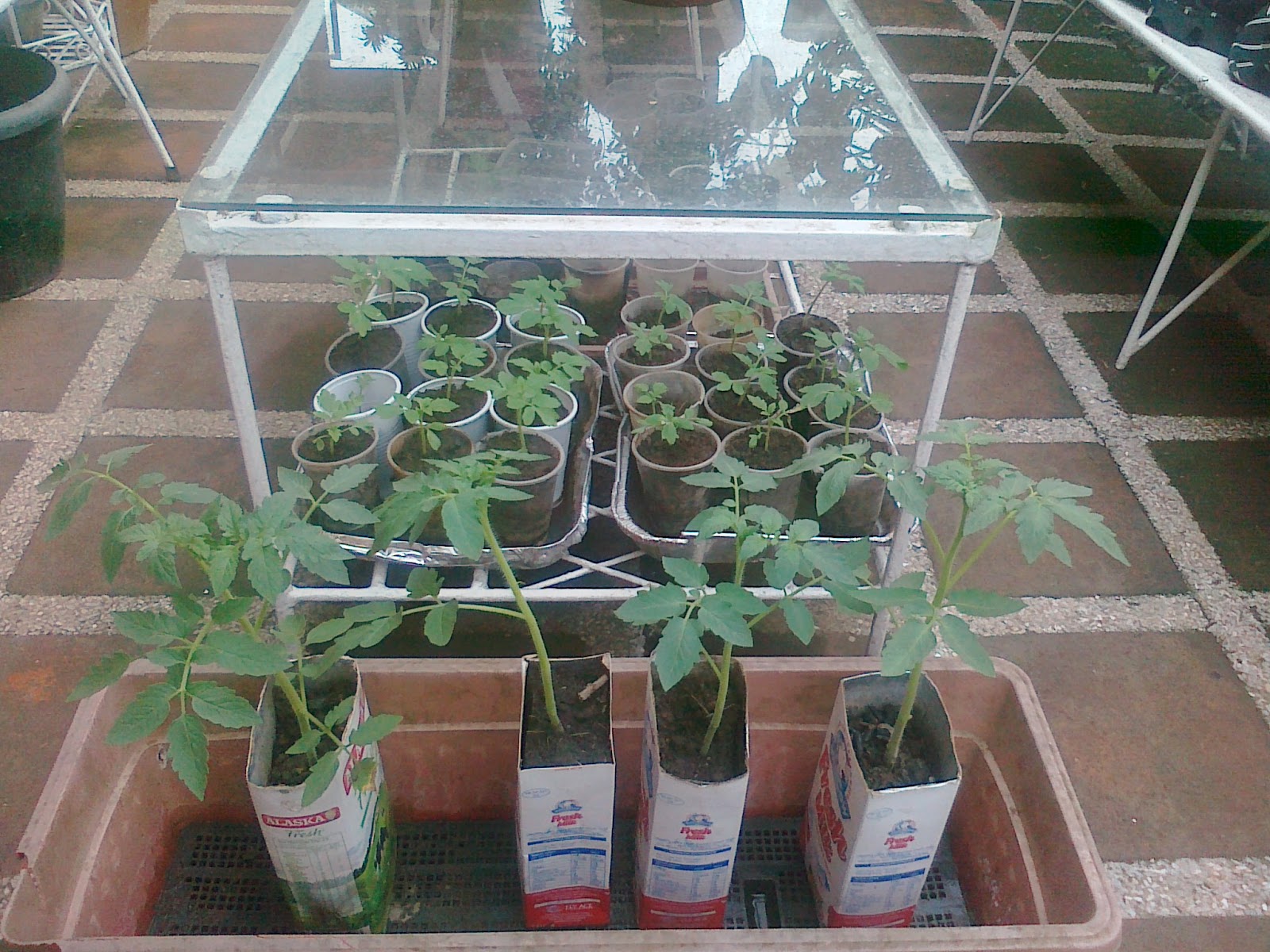 posted 1 year ago
I just stumbled on another interesting piece of research in this vein. The lacto-fermentation caught my attention because I still haven't found a use for old ferment juice...except addition in small amounts for making homemade lactofermented hummus.

Researchers used a urine-diverting dry toilet and concluded that adding a bit of kraut juice BEFORE pee would increase the lacto-fermentation.

SO, if you're making ferments and pee-based teas, take a few seconds to splash your leftover ferment juice in the tank. It reduces the ammonia smell and improves germination. (Downside: it somehow reduces N-NH4+...but we know better than to conclude that's bad. I bet a cup of tea that the N-NH4+ that remains is more bioavailable. Where's Dr. Ingham when you need her?)

posted 1 year ago
Tanning leather. Urine is full of urea, which degrades into ammonia.
Ammonia in water acts as a caustic but weak base. Its high pH breaks down organic material, making urine the perfect substance for ancients to use in softening and tanning animal hides. Soaking animal skins in urine also made it easier for leather workers to remove hair and bits of flesh from the skin.