John Weiland
pollinator
Posts: 1564
Location: RRV of da Nort
251
posted 3 years ago
Just researching the availability of other plant proteins that have gluten-like qualities, but are not gluten per se.  Does anyone know if carob protein powder has stretchy qualities like gluten or does one need to get a more pure fraction of caroubin as alluded to in the attached reference?  Also, if anyone knows of other stretchy edible plant proteins other than gluten, that would be great.  Thanks!
CarobProtein.JPG 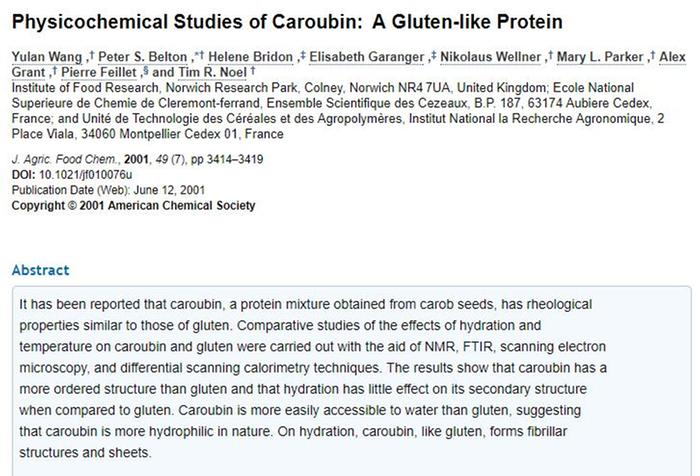 posted 3 years ago
Very interesting but I don't have any carob in the house right now to give it a try.

I can tell you casein (from milk) is similar enough to the wheat/rye/barley gluten that it can trigger a negative reaction. Not as bad as the gluten reaction for celiac but enough you don't want to repeat it any time soon. I did find reference to it several months after the incident in a dry research writeup which I no longer have link to, but. It makes perfect sense.

If you are celiac going vegan as well seems to really help! That is one thing we all miss, the stretchy cheese bit. I've had a bit of luck with some tapioca starch mixes and posted elsewhere a nice recipe for a sort of gluey cheese sauce that is totally vegan and gluten free. (Jocelyn mentioned she made some and fed it to Paul, too) Look under the 'If a Vegan Friend were to visit you today what would you feed them?' on I think the first page.

John if you experiment further with this (Carob) let me know, please.

Caroubin is mentioned in several technical articles, one wholesale (as on industrial scale) place might sell glucomann which may or may not be similar, and this thread on Permies is also mentioned (FYI).

I think us vegan celiacs might have to keep looking. Sigh.
William Bronson
gardener

posted 3 years ago
So proteins only, no carbs?
Are you making bread, meat subsitute,what?

William Bronson wrote: So proteins only, no carbs?
Are you making bread, meat subsitute,what?

I'm not sure about John, but I work on a better no-wheat vegan bread, and the ultimate, a stretchy gooey cheese that is non dairy. Nothing in this world stretches like dairy casein, that is what gives your dairy cheese melty goodness (mozzarella on your pizza). I could give up meat texture (the best convincing fakes usually build it with wheat gluten aka seitan), but that stretchy gooeyness is missing.

The best gluten free vegan meat faking is with a very firm tofu or mushrooms. I do a pretty good 'sloppy joe' mushroom based burger like substance. It's a rare treat. Black bean to me, only works in a chili.

The issues with most gluten free breads is not only getting the texture right, but not having it go stale so fast. Usually within 24 hours I have what I call 'biscuit rubble' as that's how it seems to be, a poor biscuit, and not much after that, inedible. Expensive nitrogen packed hockey puck sized commercial versions get it pretty well, but usually snuck something like honey or agave (which make me sick) into them if I get past the other things like eggs being used (it may be gluten free but it's not vegan by a long shot). And those also have to do the traditional being toasted before being used to try to get rid of that biscuit bit, but they will last three days (two days after opening day).

For bread I count on tapioca starch to give me something resembling the texture that the gluten and the egg proteins give.

I have dabbled with agar to try to give textures and mostly it's been an expensive flop.

William Bronson wrote: So proteins only, no carbs?
Are you making bread, meat subsitute,what?

I'd like some day to take stretchy proteins out to what Deb was mentioning, possibly into stretchy (vegan) cheese. In the meantime, I was just thinking about how well gluten works for the purposes of meat texture substitute, although I use it with tofu as well.  (Have even been considering mixing gluten into nut milk to varying percentages to see if it can help to aid in the texture of cheese products from those milks.)  To a certain extent, it's just a matter of having another protein available that can do what gluten does.....don't want to necessarily insert a gluten 'burger' into gluten bread/buns, but realize this is kind of an esoteric desire.  So if there was  one or more alternates to gluten that had the same physico-chemical properties, it would give some diversity to the cooking menu.  Stretchy carbs are not terrible, but not the same as protein.  Deb, for firm tofu, I get the extra firm, freeze it solid, thaw it *partially*, then grate it into crumbles.  Additional baking/microwaving seems to toughen it a bit as well....do you do anything like this or make your own?  Yes, I like to use 'shrooms as well for umami flavor and additional texturing.  Also, do you have a favored vegan substitute for scrambled eggs?

After some months of messing around, seems a good approach to burger texture is tofu crumbles as dry as possible (i.e. water squeezed out) mixed with dry flavorings/fillers/nuts and dry gluten (70%), THEN hit and mix the relatively dry mix with water to get a patty texture and cook as you prefer,.....sauteing in small amount of oil works fine until they firm up.  Would love to see if that carob (or other) protein fraction might have the same effect.  I may put this question to some colleagues who test these parameters for wheat milling/baking/rheology since, with the celiacs and other issues, they've been branching out a bit to other raw ingredients.

posted 3 years ago
I asked because most gluten replacers are starchy.
Not a big deal for bread.
I dig you on the cheese. Most get it wrong, the Dayia stuff is good but pricey.
When we served vegan pizza, we gave up on gooey and just used hummus. It wasn't cheese, but it's so good we had to remind the omnivores to be respectful and not gobble it all up!
Chia ,okra, flax, guar gum,Irish moss,pectin, so many plants make great gels, but to what end? The end use matters. Agar agar is positively rubbery, flax starts tasting fishy to me...

Tempeh can be high in protein,but I don't know what the texture is like.
Quorn is actually really tasty, but not a diy product,it's highly processed...


Edit: ah, your reply came as I was posting. I get where your headed, I think...

posted 3 years ago
I make my own tofu and I press it so dry we joke about rubber-house-bricks, I could build an addition on and spraypaint it to protect it from moisture. Firmer than any I've ever bought.

I don't do 'scrambled eggs'. Never much cared for them.

John, you are doing a traditional type of meat faking going to gluten to build it. I didn't end up on my diet overnight and I did have a time I could eat the fakemeats. They didn't quite do it, but. Then came celiac and no more seitan or gluten built food.

I would say I'm after a true vegan mozzarella that is gluten free... sigh. And better textured gluten free bread. So keep me posted about your experiments with non glutens. However I learned the hard way, there is a caveat about some things are close enough to cause a reaction with a celiac (case in point: casein). So it's proceeding with caution. If you find a gluten free source of Caroubin, let me know.