Growing veg on rafts - how to make them work?

Mike Hyatt
Posts: 10
Location: Isle of Lismore, Scotland
posted 4 years ago
I have started experimenting with growing mainly salad crops on rafts after talking to someone who sells Biohavens a product to help use water plants to treat polluted water bodies. They mentioned that it is possible to grow veg on rafts too and that this has been done historically in different pats of the world. So far my experiment has not been a great success with a home made a system similar to a Biohaven using coir matting on a blue matrix on a pallet.
I have tried plugs and seeding straight onto the coir. There is germination but no real growth as I am assuming a general lack of essential nutrients in the water. The pool is naturally clay lined with acid bog plants and peat about 30cm deep around the edge. The pool is a great place to swim as an alternative to the north Atlantic sea nearby, so we want to combine food growing and a natural swimming pool.
Does anyone have any good advice on whether it is feasible to grow veg on rafts? if so any good sources of information I can research that would allow me to combine the two . . . bearing in mind we are on the west coast of Scotland. You will see from the photos that the rafts sit low in the water a problem being that after heavy rain they increase in weight and sink and in dry weather they sit proud of the water!
20170730_174229.jpg
20170730_174220.jpg
20170730_174158.jpg
Henry Jabel
pollinator
Posts: 344
Location: Worcestershire, England
76
5
I like...

posted 4 years ago
Before you start playing with those pallets make are heat treated not soaked in fungicide etc. They will have HT on them for heat treated.

I am guessing you are not aware of this as there appears to be a blue one in the background, these are intended to be reusuable so invariably has all sorts of nasty chemicals in it.

Here is all you will ever want to know about those marks you see on pallets:

Straw floats so maybe a bale would be an alternative option? The Aztecs apparently added some organic material from the lake bed to their floating islands woven from sticks and reeds.
Mike Hyatt
Posts: 10
Location: Isle of Lismore, Scotland
posted 4 years ago
Hi Henry, maybe something wrong at my end but that link didn't seem to work. I will check but my understanding was the very basic pallets were untreated and ok, but will review if no good!
Rebecca Norman
gardener

posted 4 years ago
There are floating gardens in Kashmir's Dal Lake. What I've seen is that people go out in boats in a harvest certain types of floating weeds with a stick or oar, and then somehow link those into a long narrow floating bed. I think they make nests of the weeds and plant a plug of soil in there. They must have worked out the right balance of soil being submerged and being above the water, and according the  the articles below, the mats can be as much as 2 or 3 meters thick. If you went there in late spring you used to sometimes see a guy towing a long garden behind his canoe-like shikara boat, to its summer location. The lake water was pretty... rich... (Though I did enjoy swimming in the larger open areas a few times and the water appeared and smelled clean there. But probably not very wise to do it).

Here's a picture of one, as it gets older and grasses grow on it. They're squishy and wobbly to try to stand on:
http://asiagrace.com/kashmir/floating-gardens.php

Here's an article with good information, but not pictures:
http://www.dailyexcelsior.com/floating-gardens-dal-lake/

Islands or floating gardens on the Dal lake in Kashmir, are formed from the weeds, after collecting them from the lake itself. Such weeds mostly consist of Typha augustata and Phragmites communis which are in Kashmiri language known as Pech and Nargasa, respectively. Some other hydrophytes like Trapa spp (Gair, Singhara in Urdu) and the almost extinct Eurale ferox, are also occasionally used to form floating gardens.
The boatmen after collecting the weeds, press the roots of one against those of the next, then of next against those of the two and so on.The weeds with their muddy and sticky roots get so coalesced that these can hardly be separated. The boatmen then prune the tall culms and, thus, they themselves make mats. These mats float in the lake water which eventually constitute floating gardens. The boatmen may double the thickness of their floating gardens by stowing over them a second layer of weeds after pruning away their culms in the same year. They may similarly have a third layer over the second onwards, because the garden tends to lose its thickness by the constant play of water underneath, repeat such layering after two or three years.
The boatmen, thus, maintain floating gardens at a thickness of 1 to 2m with width about 2.5 to 3.0 m and in length around 45m or sometimes 90 to 135m. They have their ingenious technique for uniting small pieces together. They moor two pieces end to end. Along the seam they plant willow cuttings in such a way that two ends of each go deep into the two adjacent margins much like the cramps of boat. Almost every such cutting puts forth elaborate adventitious root system, traverse both to the margins together, strongly seam the other gardens.
Classification of Floating Gardens
Floating gardens are of two kinds which are locally called Radh and Demb types. The Radh type of floating gardens are made of long strips of lake reeds having a breadth of about 2m and can be pulled from one place to another. Not ineferior to the Radh in productivity are Demb lands which are formed along the sides or sometimes in the middle of the lake when the water is shallow (Gupta et al.1983).

When you google "floating gardens Kashmir" you have to wade through a lot of pictures of the floating market or the lily pad and lotus areas, which are obviously not floating veggie gardens, but you can find some of the gardens themselves. 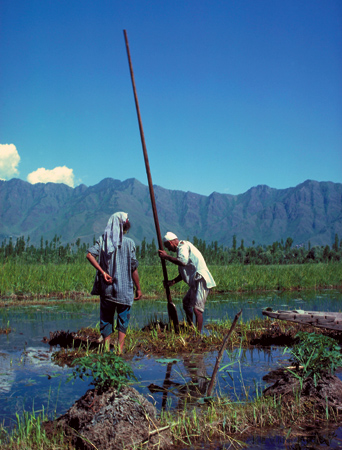 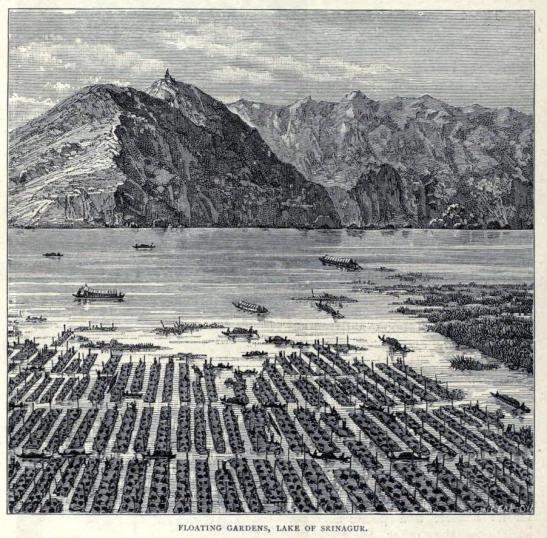 Hester Winterbourne
Posts: 426
Location: West Midlands UK (zone 8b) Rainfall 26"
93
posted 4 years ago
I am not sure why you would want to go to all the trouble?  If this is as acid a bog pool as you describe, yes there will be very few nutrients in the water.  It's not like you are short of rain up there.  I would keep the pond for swimming in and grow the veggies elsewhere.
Kai Walker
Posts: 322
Location: South Central Kansas
8
posted 2 years ago
I was just thinking of this the other day.

My suggestion was to attack food grade plastic barrels to the sides in 2 rows of different heights.

As the garden grew or it rained it got heavier. Hence the need for the 2nd row to ensure that the garden doesn't get bogged down into the water.

NON ASSUMPSIT. I am by no means an expert at anything. Just a lucky guesser.