Black gold-why is my compost lackluster?

Liz Hammond
Posts: 22
Location: Western Washington Zone 8a
2
posted 4 years ago
Hi Permies!
I've been hoping my humanure compost would produce that great dark brown/black worm-casting quality. What I have is much lighter brown, and still sawdusty. This is about a year and a half since we stopped adding to it. The volume decreased by about two thirds in that time.
Inputs included Douglas-fir sawdust from our bucket system, some straw to cover bucket material, and all kitchen scraps for 2-3 person household. I also added fall leaves, and for awhile any red wigglers I came across in my yard puttering probably a dozen or so over a couple weeks.
I thought that the ammonia levels would be high enough to meet the nitrogen demand, but the sawdust just seems to dominate.

I've attached a photo of the "done" compost and a side by side of the "resting" and "done". Both piles are in direct sunlight, and used to be covered with a scrap glass window to create a "greenhouse effect".
What can I do differently to get that lovely "black
gold"? Does it need more diverse nitrogen sources? Any advice appreciated! 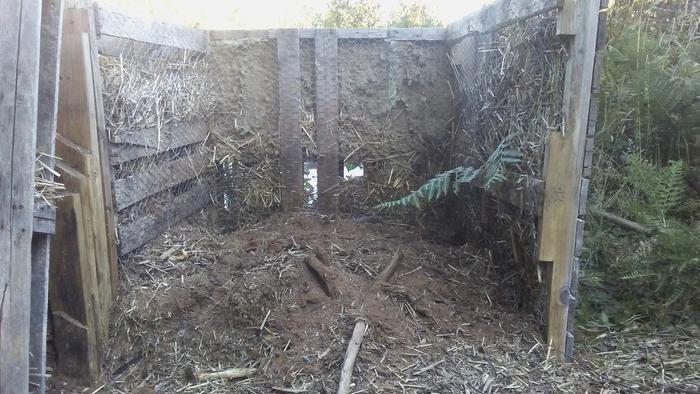 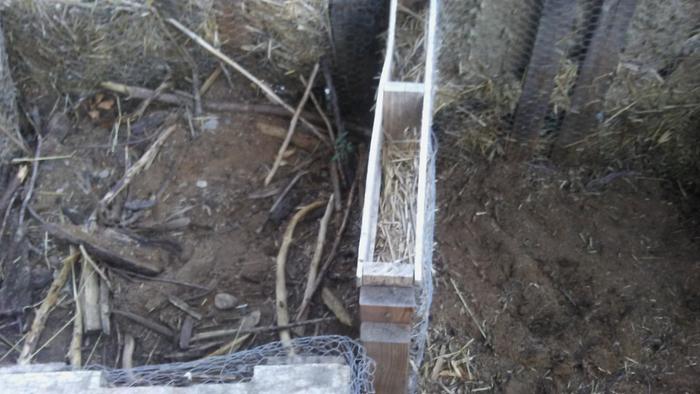 Harry Soloman
pollinator
Posts: 132
Location: Pennsylvania, Dauphin County
9
posted 4 years ago
The standards is what I say to check; temperature, moisture and such.

I would consider some natural farming inputs such as  indigenous microorganisms 5 and adding to the compost and it will break down that nitrogen very well.

Hope that helps or points in a good direction for you.

Living free starts with understanding ones own emotions and emotion affects and controls us.

posted 4 years ago
I think your intuition is probably right.  If you are still seeing sawdust like structure, then you are likely still needing more nitrogen to break down the last bit of woody stuff, although inoculating with fungi might be the best way to accomplish the breakdown at this stage.

The good thing is that some of your woody sawdust material has done the job of absorbing and breaking down your humanure (and the humanure has done it's job of breaking down some of your sawdust), as the reduction in the pile size and the indication of lots of stuff that is broken down are likely indicating.

If you are scooping sawdust type material into your humanure toilet/bucket/whatever, and you are not coming into direct contact with it except for your scoop, you could put this stuff in your system again, and it would already have a millions of microbes in it that are specific for breaking down humanure, and your humanure specifically.  (at any rate you could put a bit of it in the bottom of your humanure buckets so that each bucket has this great ingredient to inoculate your system with microbes).  If you are not comfortable with scooping the not fully composted stuff, you could use this material in pee buckets, and that would give the uncomposted sawdust a great nitrogen fix... but that might take a while, and you may not have so many buckets.

Douglas fir and many other conifers are resin rich and are not ideal in my thinking for this purpose.  You are better off getting sawdust that is made form alders, cottonwoods, aspens, birches, or other deciduous trees as these break down much more effectively with moisture.  One things that you can do if you only have access to conifer sawdust is to age it in small heaps that you dampen so that it gets inoculated with local fungi first.  You will know that this has happened as the sawdust will brown up, and if you dig in it, there will be visible white thread like hairs in the sawdust.  After you know that it has fungi in it, it will be much more effective at taking on other living organisms, and absorbing your humanure as you add it to your toilet bucket.

It might also be that your greenhouse solarizing bins are too dry.  There are a lot of microbes that simply go dormant or die if they don't have enough moisture.  By adding a bit of moisture, when you build your piles, and periodically again as you age them might make a difference.

It could also be that your bucket load and your piles are not as aerobic as they should be, and just need to be turned a few times to generate the aerobic activity that certain microbes need so their populations explode and consume the carbon.

posted 4 years ago
Humanure composting is one of those situations where you are actually working outside the normal thinking of composting, this is how many people get into trouble with humanure.

Horse, donkey, etc. You need to adjust the carbon material down so the N to C ratio remains at 1:3,
Humans with meat in their diet will produce a high N manure so once again you have to adjust the N to C ratio, humanure usually needs a 1:5 ratio instead of the standard 1:3 ratio for most heaps.

Internal heap heat should be in the 130-150 degree f range and this heat should last for at least 3 days, this insures pathogen destruction.
Humanure heaps improve if the finished material is incorporated into a secondary static heap (one that doesn't get super hot) this allows those anaerobic bacteria to be overwhelmed by the aerobic bacteria and then the fungi can gain some ground too.

Once any manure heap, no matter what type of manure, has gone through the heating process and cooled down, there is no "manure" left, it has all been converted to humus material and can now be used in a variety of methods.

One other important thing for anyone composting to remember is that you want to use the compost when it is still moist, drying out shuts down the microbiology of the compost and it will be slow to build soil organisms if you use it in this dry state.

posted 4 years ago
I like to think of myself as incredibly open-minded and open to innovation and alternative strategies for farming, etc.  But I just can't seem to get my mind around actively composting human shit.  Its a hang-up with layers and layers of resistance.

I grew up going to my grandparents farm in South Dakota every summer, riding horses, putting up hay, butchering chickens and living the farm life.  That included crapping in the privy.  They had an indoor toilet but it was plumbed to a very small and shallow septic system.  It was strongly encouraged that we not tax that limited system with a bunch of extra flushes so we crapped in the outhouse and pee'd wherever boys are prone to pee . . . anywhere.  To this day, the smell and ambiance of that old farm outhouse is seared into my memory.  The idea of doing something with that human waste after it had been eliminated from the human body, other than burying it right where it had plopped, is beyond my imagination.

I like the strategy that is employed in many parts of India, where a shallower hole is dug for an outhouse on skids.  Perhaps only a meter or so deep.  You only crap in it for about 4 - 6 months, and then you pull the outhouse over 3 meters and start over.  Using the dirt from the new hole, you backfill the old hole, and then plant a tree right over the top of your family fecal history.  The tree is planted slightly higher and then it slowly sinks to soil level as things below decompose.  Bada-bing, the poop decomposes underground, the tree grows down into that rich compost, and you never touch it again.  Every year, you are planting 2 or 3 new trees and giving them a great start on life.  No turning, no touching . . . just poop, cover, plant.  This keeps the fertility on site but you don't have to be so careful about hot composting to make sure you are killing all the pathogens.

But that response it totally off topic.  Or perhaps MOSTLY off topic.  In my mind, there should be a freedom that comes with composting.  If you get it perfect and all your ratios right, it's just great.  It heats up, breaks down, and 3 weeks later its ready to use.  But if it doesn't heat up, or if it gets too wet and is a bit stinky, or a raccoon digs through it and throws it all over the place, I don't get to worked up about it.  I'll turn it, or add some more carbon, or rake it back up, or let the chickens go crazy on it . . . no big deal.  But with human feces, it's a whole different ball game.  You can't be low key about these things.  You've got to exercise caution.  You've got to get it right (as the OP is asking about).

IF I ever get to a place where I'm entering into the wonderful world of human fecal recycling, I think I'll go the India method.  Simple, one-and-done, and not much room for error.  But best of luck to you, and I hope it all works itself out in the end (no pun intended).

posted 3 years ago
Check out the latest video of the great Joe Jenkins and hopefully be inspired: