Bethan Lewis
Posts: 4
1
posted 2 years ago
Hi, I've just joined this forum/website, and I thought you might be interested to hear about a little homestead (smallholding) in Brittany, France.
My family and I moved to France from the UK when I was 13, and bought about an acre of land. That was in 1994, so quite a long time ago now. At first we did lots of silly things with the land, but gradually it became clear that some  things work and some things don't. We also learnt a lot from the old people who lived locally (many of them are now dead). When they were young they all grew all their own food, without tracters, and often had only one or two animals, such as a pig, and maybe a cow. They also lived in little stone houses, that were completely eccological, and had a lifestyle that was of no harm to the planet.
Obviously, modern farming has changed all that, and now this area is full of chicken and pig sheds, tracters, and modern farming techniques.
However, on our little plot, we are trying to put the old ways into practice - and having pretty good resultts. My Dad and brother have planted lots of native trees, divided big fields into little (very little) fields, and we also do most of it by hand. The main innovation has been using a sturdy tool called a hoe to break up the ground, rather than a tracter or plough (plow). It's slow work, but it's nice and quiet, doesn't break, and only breaks up the top few inches of soil - which seems to be a good thing.
Here is a picture of the veggie garden and the wheat and rye patch.
Cheerio
Bethan 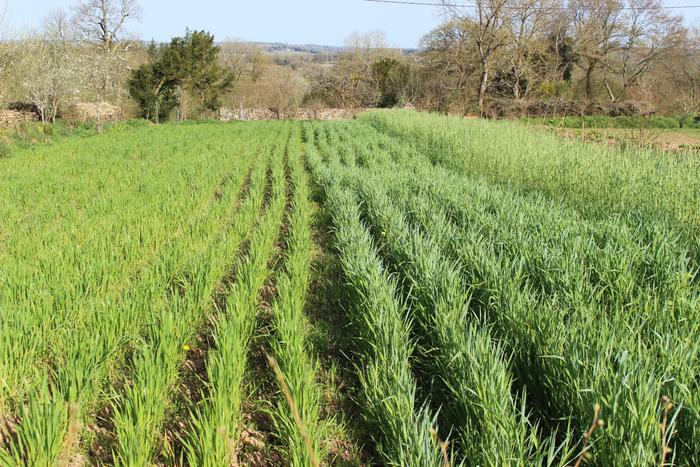 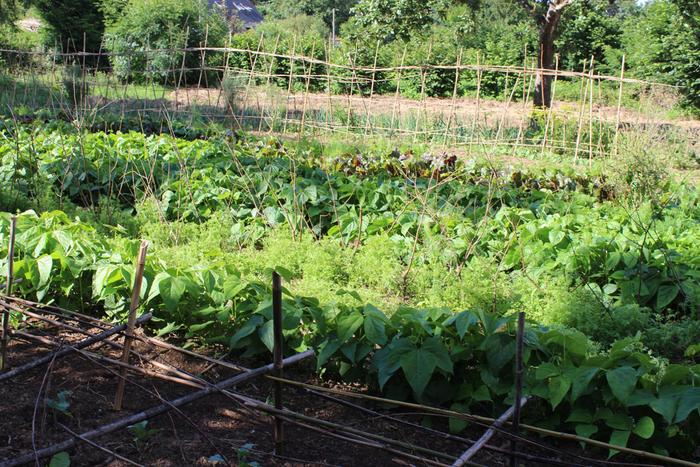 Nice to have some  Permies in France, welcome.  I love what you are doing with your land, it reminds me of my early childhood in the 50's in the South of France.  My great uncle's farm was very much as you describe.  Well, it wasn't a very big farm, he never had more than 6 cows at any one time, 4 pigs, some chickens, ducks, guinea fowls, pigeon and rabbits - totally self-sufficient except for salt, coffee and oil. He even made his own wine, I imagine in Brittany it would have been cider.  Of course, I forget his beloved horse who was the best worker on the farm!   There was no bathroom, water from the well and cooking was hanging pots in the fireplace.  As you said, everything was done by hand and being organic was not an issue, it was just the way it was.  I know what you mean about working by hand being slow but quite enjoyable.

I hope your little homestead will thrive with your new ideas, keep us posted . Nice photos by the way.

posted 2 years ago
So lovely!  Thank you for sharing pictures!

This year I as well learned that I don't need a plow or tiller.  Hand tools and small patches...gentler on the land, and good for me to take my time, as well.

(I hope you'll share more if you want to!  Loved seeing this!)

David Livingston
pollinator
Posts: 4328
Location: Anjou ,France
243
posted 2 years ago
Bonjour Bethan
I live just outside Brittany in Anjou just 40mins from Rennes we visit Brittany often to dance and play music , where approx do you live ? Nice looking crops :-) how do you process them ?

posted 2 years ago
Hi Bethan,  you talk about learning from old people, my french neighbour has done that, and tells me that in the mini village where i live about ten families lived well of the land, now two farmers own the surrounding land, the wealth, huge tractors basically is owned by the banks.
There used to be small ponds everywhere, people kept fish fresh in, the hedges where not kept short as methodically but full of fruit trees with which they made moonshine, poire and so on. The hay stayed much longer on the land, animals profited and were abundant. People had no chemical fertilizers so grew their own greening components which the wildlife profited of. Everybody worked, no handouts, but people were social-ish.
Also no docters, dentist, people drank a pint of alcohol as a medicine before work, little heating, some people slept against cow in the barn.
He loves when i introduce perma culture ideas, but is too busy himself and old to go for big change, he would if he was younger though.
He is an exceptional farmer, very open minded and understands my Fr-ollandais , dutch version of Fr-anglais, quite well.

Bethan Lewis
Posts: 4
1
posted 2 years ago
Hello-I'm glad the photos came out well. I live near Guingamp, in central Brittany - in reply to your question.
At the moment everything is processed by hand. The grain is cut with sickles then threshed using flails (in French, fleaux). We winnow it using an old winnowing machine, and sieves, and mill it with an electric flour mill. All quite a lot of work, but very rewarding.
Bethan,
John C Daley
pollinator
Posts: 1311
Location: Bendigo , Australia
82
I like...