posted 4 years ago
Hi Todd, this sounds like a great project, in an amazing location. If you get the opportunity to take photos you should definitely start posting those to this forum so we can follow your progress.

Having the hand sculpted house is definitely the best next thing to having taken a cob course so you are all set there. With that book in hand you should have all the technical foundation, wall, and roof information you need. Just make sure your rubble trench drains to light with that much rain. 200 square feet is a great size for a first time build, and with curved walls will be fine for a reciprocal roof. If you want to incorporate those big windows into the design, you will most likely need a straighter wall so that it will fit. The shape should really be decided on to fit organically into your surroundings.  Feel free to check out my blog. The link is in my signature. I also recommend checking out the following links that are to smaller cob houses like yours and give some nice info, one is even in Australia.

If I have some spare time I may draw up a sketch to get you started.  A few questions to get me started.  How thick were you thinking of making the walls?  How high were you thinking of making the? Do you know what type of lumber you would be using for the reciprocal roof?   How deep does a rubble trench foundation need to be in your neck of the woods?  Do you know the grade of the hill you are building on?  Do you have a flat spot for your home or will it be cut into the grade?

If I have some spare time I may draw up a sketch to get you started.  A few questions to get me started.  How thick were you thinking of making the walls?  How high were you thinking of making the? Do you know what type of lumber you would be using for the reciprocal roof?   How deep does a rubble trench foundation need to be in your neck of the woods?  Do you know the grade of the hill you are building on?  Do you have a flat spot for your home or will it be cut into the grade?


Hi Steve and any others Watching... We have just had about 3-4 foot of rain in the last week, so it has taken me a while to get some decent photos. The site will be levelled using a large Case Backhoe. The photo shows the size of the pad that will be cut. All up about 24 foot diameter and 15-16 foot diameter for the 200 sqft home. I am thinking 24 inches wide and 24 inches deep for the rubble trench. There is no frost issues where i live. It simply does not get cold enough! I will be using Blue granite for the stem wall and for the rubble trench itself with gravel 1 to 2 inches. This material will be taken to the site with the backhoe as a truck is unable to get into my property on the driveway. To the right of the pad in the photo there is a good drainage area and a drainage trench from the rubble trench will be going into that. I plan on a composting toilet and shower outside of the house. So the walls I think would be 20 inches thick. I am not sure what height they will be as I am unsure of the final layout of the home. I really do not know where to start regarding installing a loft bed. Double or queens size to save on floor space. If it is easier to just have one on the floor then that is fine. Simplicity is best as this is my first build. The reason I asked for help was to get a floor plan ready so that when the backhoe is here he can dig the foundation trench at the same time as clearing the pad and moving the rock. The ground is pretty hard down in the sub soil area and would rather the majority be done when he is here. Any corners I can dig myself but would prefer to have the longer portions dug by machine.
The photos of the bricks!! I am pretty sure that I have a heavy clay content in the subsoil. The jar is at six weeks not and has not really changed much and has a lot of clay in suspension. The bricks were left for 5 weeks and may be too thin for the 5 foot drop test i did. All of them exploded on the concrete from 5 feet. The percentages and fractions were a clay soil to aggregate mix. Personally i believe the 60/40 was the best mix. No straw was in there.
Regarding the Lumber... I have a large tree behind my Completed house that needs to come out in the next month or so. Semi hardwood that may well process some good lengths of lumber. I am not yet sure. I also have two other trees on the building site that will need to come down as well. I am hoping they too may be of good use. I will have a mobile mill to do the job as he takes wood as part payment.
So the basic floor layout for the rubble trench is the most important for the moment as I will need to have something for the Operator to go on

... Simplicity is key for me. Of course quirky and cute is also highly desired. Hope this helps and I really appreciate any help offered and received. Will continue reading and researching design.
ps... as a side not. I would really like to incorporate some of the glass panels I have in the build. Ventilation is also key as it will be in a humid and hot rainforest.
Cheers... Todd
20180206_124538-(1).jpg
20180206_143456.jpg
20180206_143649.jpg
20180206_143914.jpg
Daniel Gair
Posts: 28
1
posted 4 years ago
Have you already begun your foundation?
We decided to go with a 7 meter rondaval made with cob and a reciprocal roof. Even at that size we needed to create a bump out for the bathroom, shower and closet. We still made it too small once we realized things we need to store. Even here in Mexico it gets colder in the winter so blankets, jackets & rainboots have no home. Brooms, buckets & mops. Forget storing tools and this is with the kitchen in another rondaval same size. There are two of us & hubby  has way too many musical instruments. Just saying you may want to look at what you own first and make sure there is a home for all of it in your design.
Enjoy the process!
Holly
John C Daley
pollinator
Posts: 3572
Location: Bendigo , Australia
303
I like...

posted 4 years ago
I ask why does a tree need to come down, when you could move the house?
More importantly, your soil needs about 50% sand and gravel, it appears to be about 100% clay which is unsatisfactory.

You may need to dig deeper or in a different area to find some sand etc.
Good luck

posted 4 years ago
hey there todd.

looks like you are living the dream! how is your progress?
cob wants to be about 10-20% clay the rest can be up to 30% silt and fine sands the rest ought to be crunchy sand. lots of things can work, but building while the weather is wet means the walls wont set as fast and putting lots of cob on walls made with too many fines can make for instability and slumpage, worst case -wall failure. (scary af)

i live in about 300sqft with my partner and 2.5 kids. we have other out buildings for things that need storing and things that need washing like clothes and bodies. we make it work.
i would do 200-250sqft place. rounded north wall with nice doors heading out to the north and put a big overhang out there for shade, and extra dry space. this front bit could be single story and the hang out/eating area, the other 100sqft behind, could be two stories, the kitchen below, and bedroom above. out the back of the kitchen is more overhang where you can poop in a toilet and have a shower if it is not raining at the time!
6 posts, two roof planes. two short posts for the north side. (one beam to catch the front load of roof line 1) two tallest posts in the middle, (w/two beams) one can catch the high end of the single story roof the other beam catches the high end of the loft beginning roof plane 2. two more posts medium height to catch the back sloping roof of the loft. over all shape a big oval or an oval with one end squared up...

does that make any sense?

cob rockets built in the rain are my speciality.

posted 4 years ago
now this house has a double loft. but you get the idea... it is also only 120sqft on the ground. more if you count lofts
Figure-5.8.jpg 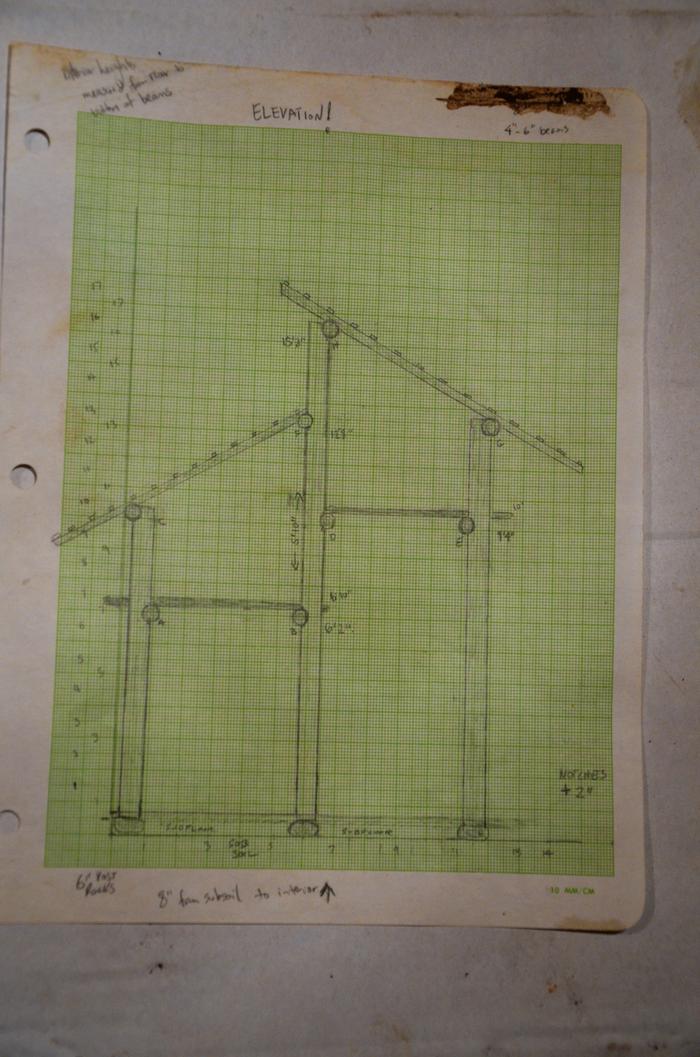 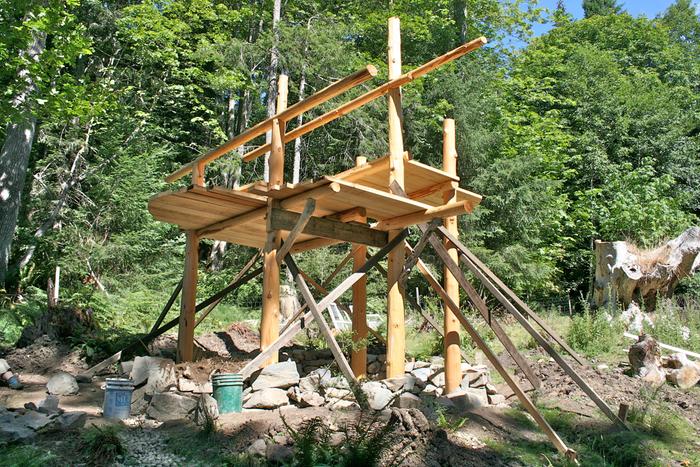 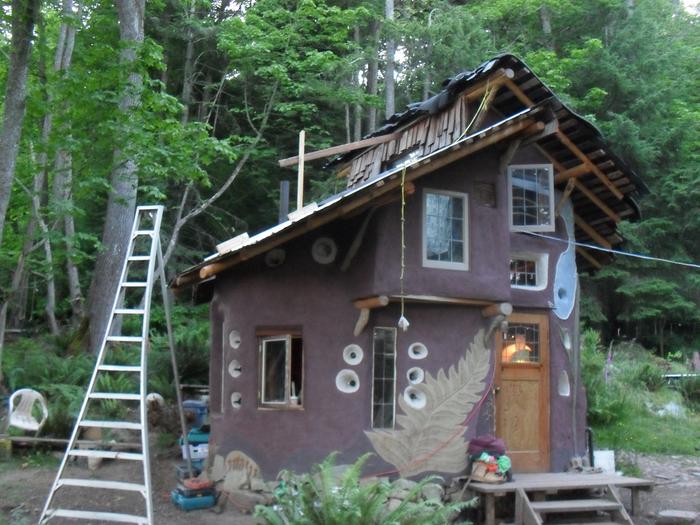